Sophie Campbell takes us around some of Britain’s best castles

Castles are our earliest live-work spaces: too fortified to be houses, too domesticated to be fortresses. It’s the marriage of form and function that makes them truly fascinating to visitors – not to mention their strategic location in the landscape, their fabulous views, bristling defences and role as literal power bases for a family or monarch.

This May Windsor, the largest of our castles, is in the spotlight as Prince Harry and Meghan walk up the aisle for an intimate wedding in St George’s Chapel. A month later the Queen’s favourite castle will host the annual garter ceremony, maintaining a chivalric order founded in 1348.

It seems incredible that Windsor Castle and the Tower of London – the two remaining intact Norman castles thrown up around London after the 11th-century invasion – are still in use. That’s continuity for you – they’ve survived all that history could throw at them.

Many castles in Britain are not as instantly recognisable as Windsor. Maiden Castle, for example – the mighty Iron Age fort within walking distance of Dorchester in Dorset – was the heavily-defended home to hundreds of inhabitants in the first century BC.

As the name suggests, Saxon Shore Forts, such as Dover Castle, were originally built as Roman forts facing south and east to fend off potential Saxon raiders; some disappeared, others became inhabited castles.

Scottish Border country, now the most tranquil landscape imaginable, is still dotted with the proto-castles known as Pele towers; simple stone constructions with spiral stairs, few rooms and defensive views for miles around. My favourite is the unforgettably-titled Fatlips Castle near Hawick, allegedly named for the smacking kisses bestowed by its medieval occupants on visiting ladies, but now owned by the Earl of Minto. You can get the key from the local garage in Denholm and pant your way up to the top.

Finally, there are castle-style private homes with no true fortifications, mostly built by romantically-minded Victorians: Highclere springs to mind, sunk into its bowl of land on the Berkshire/Hampshire border and glamourised by its role in the hit television series Downton Abbey.

The castles below are scattered across the country and divided into the super-castles that most of us have heard of and surprising castles that we might not. Forward into the breach!

The 700-year old home of the Percys (including notable 14th-century knight Sir Harry ‘Hotspur’) has been revitalised by the current Duchess of Northumberland, who not only built a gigantic tree house but planted a poison Garden, to the mild alarm of her husband, the 12th Duke. Famous for its Harry Potter connections, the castle offers broomstick lessons.

Do not be put off by this robustly commercial castle: it has a staggering 1000-year plus history and an amazing armour collection inside the State Rooms. Stay at the eye-watering expensive – but brilliant – Tower Suites, join a medieval-themed sleepover and see the excellent live-action summer jousting show, Wars of the Roses Live! 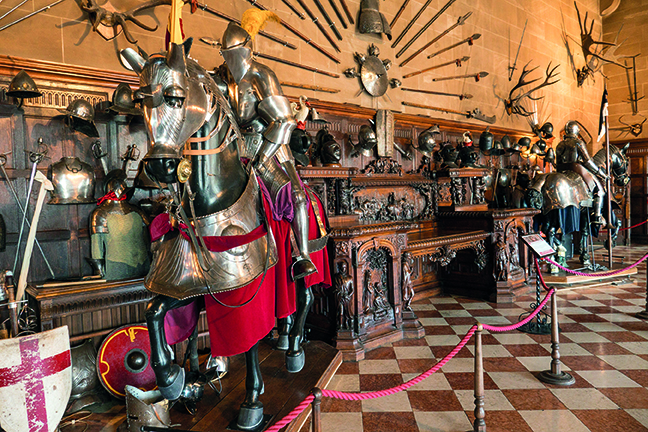 Warwick Castle – the armour collection inside the State Rooms

You do not get more ‘Hogwarts’ than this, especially in the snow. This fabulous Scottish baronial structure with its rocket-turrets, battlements and stepped gables replaced an earlier building. Glamis was home to the late Queen Mother and birthplace of Princess Margaret, younger sister to Queen Elizabeth II. It was once also home to the murderous Macbeth and his missus.

If a child drew a castle, this is what they would sketch. Dover has everything, from a Roman lighthouse to a classic Norman motte and bailey, from Great War gun emplacements to Second World War tunnels. Do not miss the steep medieval tunnels on the landside, built by KingJohn’s forces to withstand the siege of Prince Louis of France in 1216.

EDWARD GOES TO THE SEASIDE

You simply cannot beat moated Beaumaris’ setting, squatting over the eastern Menai Strait in Wales, while its sister castle at Caernarfon guards the western. With Harlech and Conwy, they make up a UNESCO World Heritage Site: the Castles and Town Walls of King Edward I in Gwynedd, dating back to the late 13th century.

This evocative survivor of the English Civil War (which spectacularly plugs the gap in the hills leading to the Isle of Purbeck) summons up the ghosts of warriors past, with its solitary ‘murder holes’ and arrow loops

Cross the bridge into this castle guarding the entrance to Portsmouth Harbour and you will see evidence of a square Roman fort replaced by a Saxon stone tower replaced by a normal bailey and later a stone keep. Check out the surviving Théâtre des Variétés de Portchester, used to stage shows by French prisoners during the Napoleonic Wars.

What would the builders of this Welsh hilltop castle think if they could see it hunkered down peacefully amongst terraced gardens, with clipped yews marching along like portly soldiers? The Herbert family bought it in the 16th century, later adding the stunning gardens and a museum to the notoriously wealthy Clive of India, whose son married into the family during the 18th century.

FIT FOR A QUEEN –OR FOUR

A great Tudor hotspot where four queens – Anne Boleyn, Katherine Parr (‘KP’, who lived here), Lady Jane Grey and Elizabeth I strolled on the parterre now known as the Queens’ Garden. Its stunning chapel contains KP’s tomb, the only private burial of an English queen. Books and love letters written by Katherine are on show in the house.

This 125ft-tall keep, built over an original 1080s construction, guarded the River Medway. It survived a vicious siege by King John, only to fall into disrepair by the 18th century. The keep has fighting platforms, a gap in the stairs down which unwary invaders could fall, and an anti-clockwise, right-angled staircase, making upward progress tricky for attackers.

One of the least-known and most fascinating Norman castles, slighted during the Civil War and later destroyed by fire. Its mound is home to Dudley Zoo (tickets include entrance to both), which has Britain’s biggest concentrations of 20th-century Tecton buildings, and beneath that is a world-famous deposit of fossils. Look for trilobites in the castle walls.