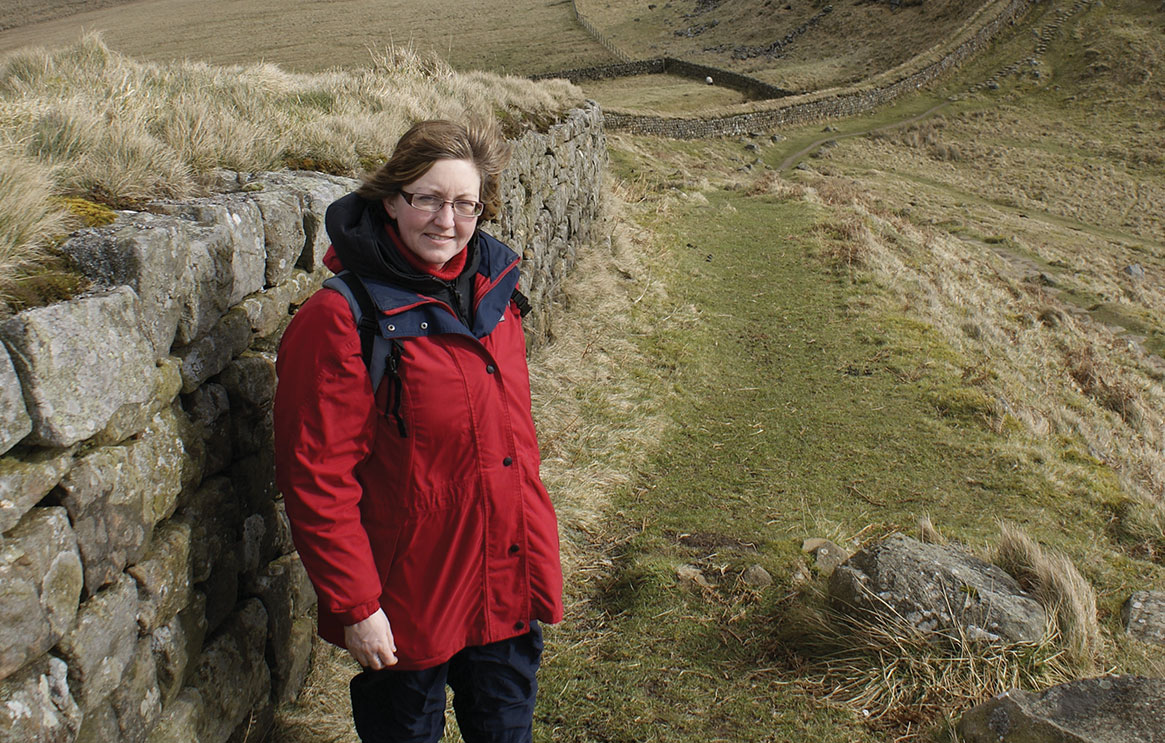 “The most popular postcard at Housesteads Fort features six centurions on the toilet,” says Laura Rhodes. “There they are, the mighty Roman army, builders and guardians of Hadrian’s Wall – one of the greatest engineering projects of antiquity – sitting on their selfflushing communal loo having a chat. It’s this social history, and the wall’s beautifully wild location, that fascinate me”.

Hadrian’s Wall takes its name from the Emperor who ordered its construction in 122 AD. “It runs coast to coast, from Newcastle to Cumbria,” Laura explains, “a 73 mile military border that marked the northern edge of the Roman Empire. It sent out a message: beyond here are uncivilised barbarians, and they shall not pass.

“Vindolanda is the most famous of the wall’s 17 forts. A cache of wooden tablets was discovered here in 1973. These flimsy post-card size slivers of birch, elder and oak are the oldest surviving handwritten documents in Britain. Over 750 of them have been translated, forming a unique record of daily life.

“My favourite is a letter about socks and underpants sent to a Mediterranean legionary posted to windswept northern England. With only army-issue sandals and a woollen cloak, he was desperate for something to keep him warm in the Northumbrian winter.

“Dr Robin Birley found the first tablet in 1973. His son, Andrew, is now chief archaeologist. Vindolanda has an easygoing, friendly family atmosphere and Andrew sometimes comes and chats to my groups about the latest discoveries.

“Since 2011, after many years of campaigning, some of the tablets – which are held at the British Museum in London – have come back home and are on display the fort’s renovated museum.

“From April to September volunteers come from all over the world to take part in Vindolanda’s annual archaeological dig. They are hoping to uncover unique objects – but every artefact has to be recorded and conserved, so you sometimes hear the cry ‘not another bloody shoe’.

“But I am a fan of the museum’s footwear display – the exhibition of sandals, hobnail boots and toddler shoes evokes the lives of people who wore them. The women and baby shoes are from the vicus, a civilian settlement that grew up next to the fort – where the soldiers’ girlfriends, wives and children lived. 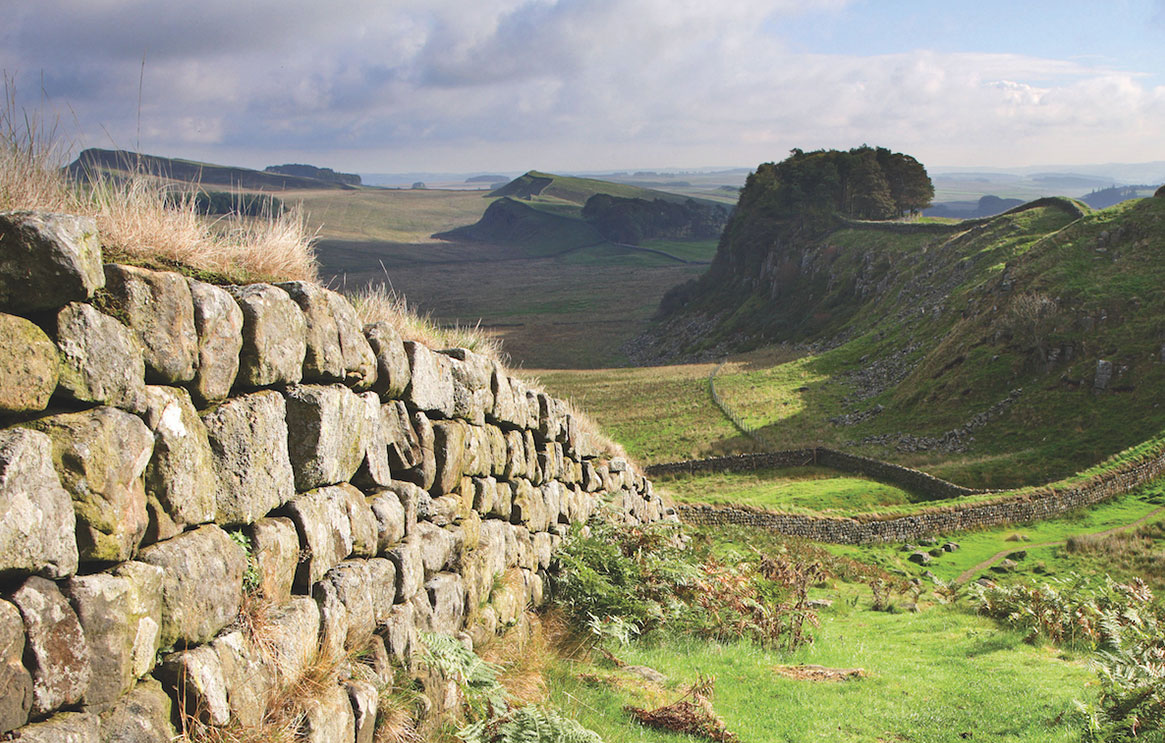 “Housesteads sits on top of a high rock ridge where soldiers once kept watch for invaders from the north. Archaeologists have discovered a military treatment centre here, with small metal implement used for eye operations. With no anaesthetic, patients would probably have been restrained and dosed with alcohol to numb the pain. Ancient terraces near the wall suggest that the Romans might have planted vineyards here.

“But it’s the military toilets that visitors find most fascinating. Romans didn’t go the loo in private, they visited a communal latrine. There was no toilet paper, they used a  sponge on a stick – it’s not known if you had your own or if it was shared. Water was piped down from the top of the fort to flush the sewage away.

Laura walked the length of Hadrian’s Wall in 2007. “I trekked the 95 mile path. It took me a week travelling from west to east – I prefer that direction as you have the prevailing winds behind you. Some parts of the wall rise up 10ft – standing imperiously amidst the remote landscape of fields, farms and sheep. 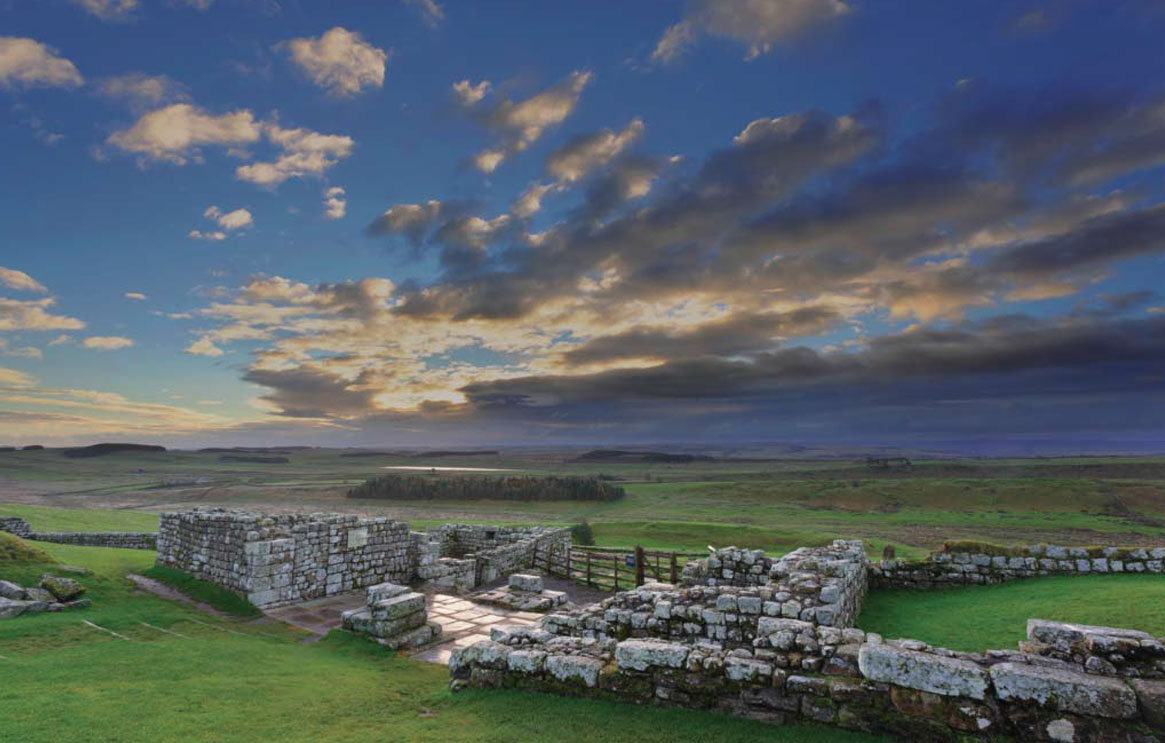 “The first person to hike the length of wall in modern times was William Hutton. In 1801 he walked from Birmingham to Carlisle, across to Wallsend and back again – over 600 miles. He was 78 and his daughter followed him on horseback to make sure he was ok. In Hutton’s book about the journey he said: ‘I am the first man that ever travelled the whole length of this Wall, and probably the last that will ever attempt it’. Today the wall attracts thousands of visitors – it’s the most popular tourist attraction in Northern England.

Laura lives in Newcastle. In Hadrian’s time Pons Aelius, a bridging point across the river Tyne. The ancient city has disappeared under the modern one, but there is a plan to locate the site of the Roman bridge. It’s part of Project Wallquest, a scheme which involves local people in hands-on archaeology. “I know how rewarding that can be,” says Laura. “In 2009 I helped on an archaeological dig at Arbeia, a Roman supply fort south of the Tyne.

I was assigned one square foot of soil, and told to gently remove 2mm layers. It was slow and laborious, but I uncovered a piece of roof tile – the first of its type to be found there. The chief archaeologist was very excited, and so was I.

“Arbeia means ‘fort of the Arabs’. I often think about the soldiers who were sent here from Syria, Palestine, Arabia and beyond. After 25 years they were pensioned off and given a piece of land, and many had taken local wives. So Northumbrians are the ancestors of these legionaries, and the wall is a monument to this ancient international heritage.