Join your private Blue Badge guide for a tour of Arundel Castle in West Sussex – one of England’s most complete castles.

Rising up on the south coast and set among 40 acres of stunning grounds and gardens, it was founded in 1067 by Roger de Montgomery, Earl of Arundel.   Today the Castle is the ancestral seat of the 18th Duke of Norfolk, the Earl Marshal of England whose role includes the organisation of major state ceremonies such as coronations and state funerals and the annual State Opening of Parliament.

With a thousand years of history, Arundel Castle offers a full day out for everyone.  Your guide will take you through the castle’s rooms; from the Armoury and Barons’ Hall through to the beautiful Regency library.  Climb the Castle’s 30-foot tall Norman Motte and Keep to enjoy breathtaking views across the nearby River Arun, the rolling South Downs and a spectacular panoramic vista of West Sussex.

The castle is home to a fine collection of art works, including paintings by Van Dyck, Gainsborough and Canaletto.  Film fans will see locations featured in Doctor Who, The Young Victoria and The Madness of King George.

Arundel Castle’s dazzling walled gardens include the Earl’s Garden, officially opened by HRH The Prince of Wales in 2008, the Organic Kitchen Garden, sweetly-scented Rose Garden and the highly acclaimed Stumpery. 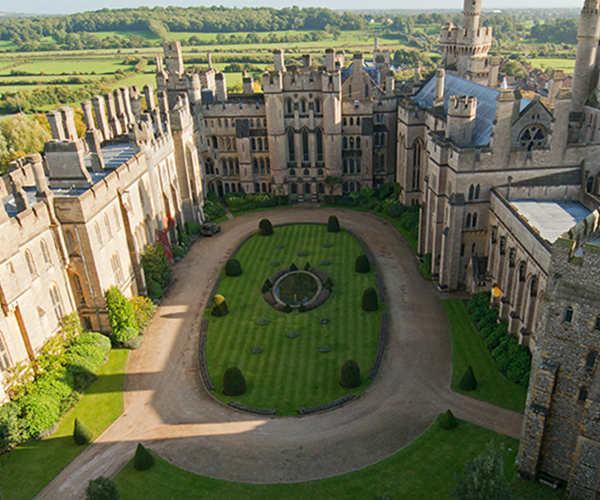