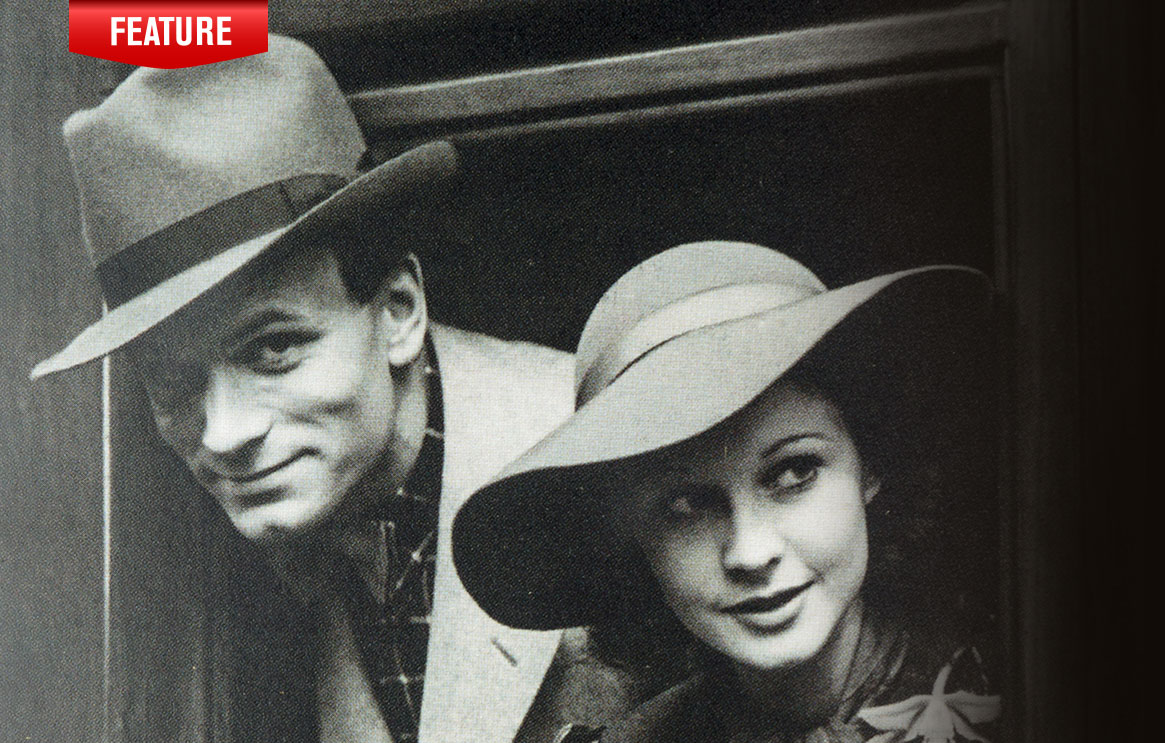 Blue Badge Guide and journalist Marc Zakian uncovers the story of British film – from its history to its locations and movie stars.

In 1888 a camera looked down from the top window of Hicks Ironmongers in Leeds. Behind the lens was its inventor Louis Le Prince.His grainy images of traffic crossing the town bridge are the world’s first filmed moving pictures.

Two years later Le Prince disappeared from a train in France. Scotland Yard searched for him, but his body was never found – fuelling speculation that he had been murdered by jealous rivals. The ‘Father of Cinematography’ never received the recognition he deserved.

William Friese Greene was the first person to use celluloid film in moving pictures. In 1889 the British inventor filmed scenes in London’s Hyde Park, yet his innovation was ignored (the Lumière brothers are credited as the ‘inventors of cinema’) and Friese Greene went bankrupt.He collapsed and died in 1921, ironically while speaking at a meeting discussing the poor state of the British film industry. His Highgate cemetery tomb commemorates him as: ‘the inventor of Kinematography’. 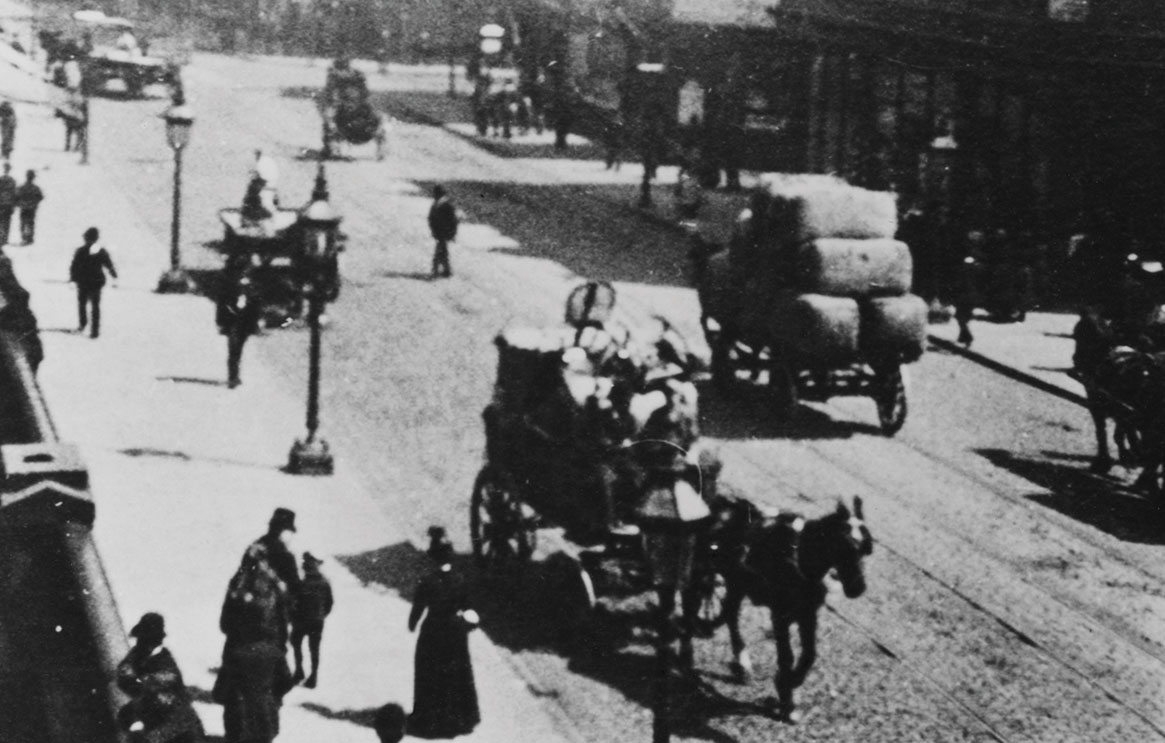 The first successful British movie was Incident at Clovelly Cottage. Filmed in 1895, the film brought a fleeting touch of glamour to its location of Barnet and paved the way for the rise of film as popular entertainment. Film became popular entertainment and four thousand cinemas were built during the early 1900s. By 1945, movie mad Britons were going to the ‘pictures’ twice a week.

But the sudden success of the movie theatre was followed by an equally swift decline. Cinema’s nemesis – television – had arrived. The small screen entertained people at home, and by 1980 some three quarters of the country’s grand picture houses were gone, turned into bingo halls or demolished.

Then, unexpectedly, the silver screen fought back. From a low point in the 1980s, UK film admissions trebled. New film studios opened; in 1990s the WW11 airplane hangars of Leavesden were converted for the filming of the James Bond, Star Wars and Harry Potter franchises, while Pinewood Studios is doubling in size and creating a new outpost in Wales.

British film continues to thrive, appreciated throughout the world for its unique mix of costume drama, offbeat comedies and literary adaptations.

In 1889, the year after moving pictures were invented, a boy was born just off London’s Old Kent Road. When he was two, his father left leaving his mother destitute. By seven he was living in a workhouse. When his mother was admitted to an asylum, he went to live with his alcoholic father and by 14 he was homeless.

Ten years later he was living in Hollywood and in 1916 signed a movie contract for $670,000 a year, making Charlie Chaplin, at 26 years old, one of the highest-paid people in the world. Chaplin’s rise from misery, through music hall performer to become the first global movie star could only be realised in the United States. But his street tramp character – who first appeared on screen a century ago this year – wore an English bowler hat, and had its roots in London’s streets and workhouses. 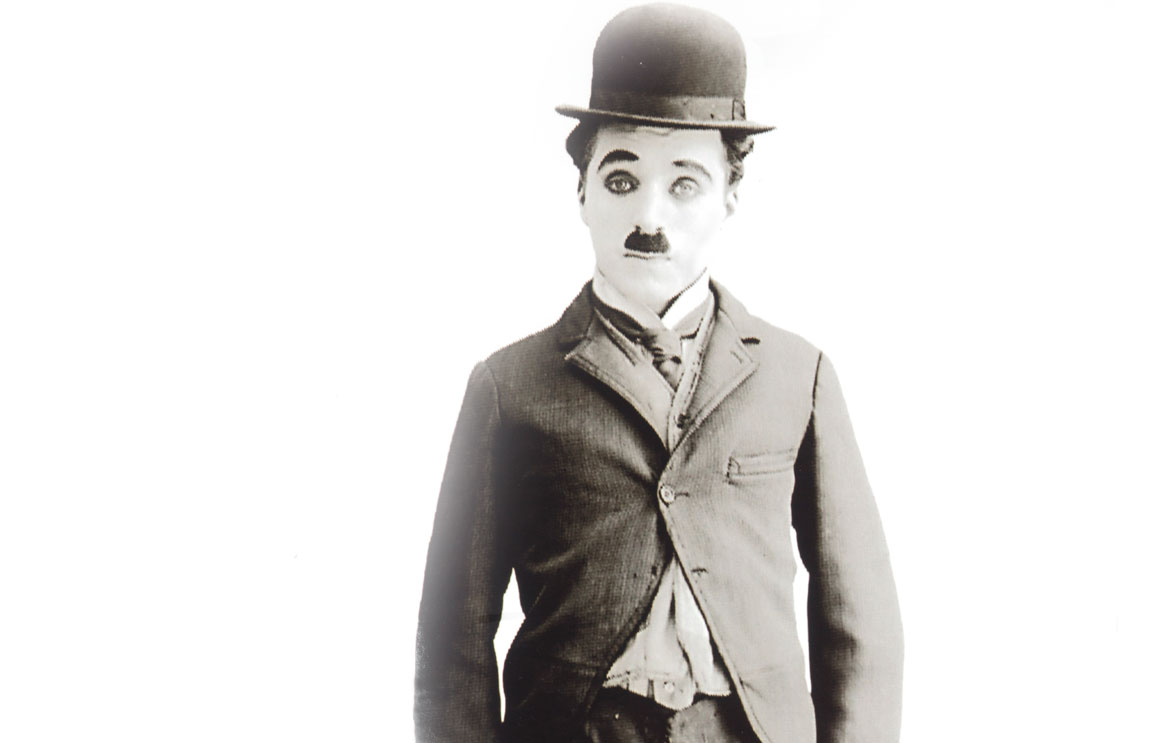 In 1904 a five-year-old boy was sent to Leytonstone Police Station in (what was then) Essex. He carried a note from his father, requesting the officer to lock him away for five minutes as punishment for behaving badly. Alfred Hitchcock went on to become the master of suspense movies, making Blackmail in 1929 – the first British sound feature – and a series of films at Islington’s Gainsborough Studios, before relocating to Hollywood. His short stay in a London police cell gave him lifelong fear of policeman and wrongful accusations, a theme that ran through many of his great films.

In the 1950s Vivien Leigh was the filmstar half of the world’s most famous showbiz couple. Her husband, Laurence Olivier, was merely the ‘greatest stage actor in the world’. There are stories of people being so overcome by their glamour that they would faint on seeing them. Leigh found this kind of attention trying.

Born in India to British colonial parents, she studied theatre at London’s RADA with a determination to become a great actress. Hollywood turned her into a movie star; in 1939 she won the ‘Search for Scarlett O’Hara’ and played the lead in Gone with the Wind. In 1951 she reprised her stage role as Blanche DuBois in the film of A Streetcar Named Desire. Leigh won Best Actress Oscars for both films. While there have been many great British film actresses, she was one of the few who was undoubtedly a film star.

Few child actors go on to succeed as adults. Hampstead-born Elizabeth Taylor defied these odds, graduating from a Lassie film via National Velvet to become an MGM star during the Golden Age of Hollywood.

Her fame peaked when she played Cleopatra to her future husband Richard Burton’s Mark Anthony. Taylor won an Oscar in 1966 for Who’s Afraid of Virginia Woolf? and continued to act until the Flintstones in 1994. Married eight times – twice to Richard Burton – his Valentine’s Day present to her one year was ‘La Peregrina’, the famous pearl, formerly owned by Queen Mary I of England.

When Queen Mary II instructed Christopher Wren to build a hospital for retired seamen in 1694, she might have noted that, ‘in the future it should also serve as a great place for the making of moving pictures’. No sooner has one film set wrapped here, than another arrives. It has doubled as the grounds of Buckingham Palace in The King’s Speech, served as French Barricades for Les Misérables, staged wedding number two in Four Weddings and a Funeral and hosted Johnny Depp as Captain Jack Sparrow for The Pirates of the Caribbean: On Stranger Tides. Most recently, it stood in for a Berlin street in Muppets Most Wanted, and featured prominently in Thor: The Dark World. 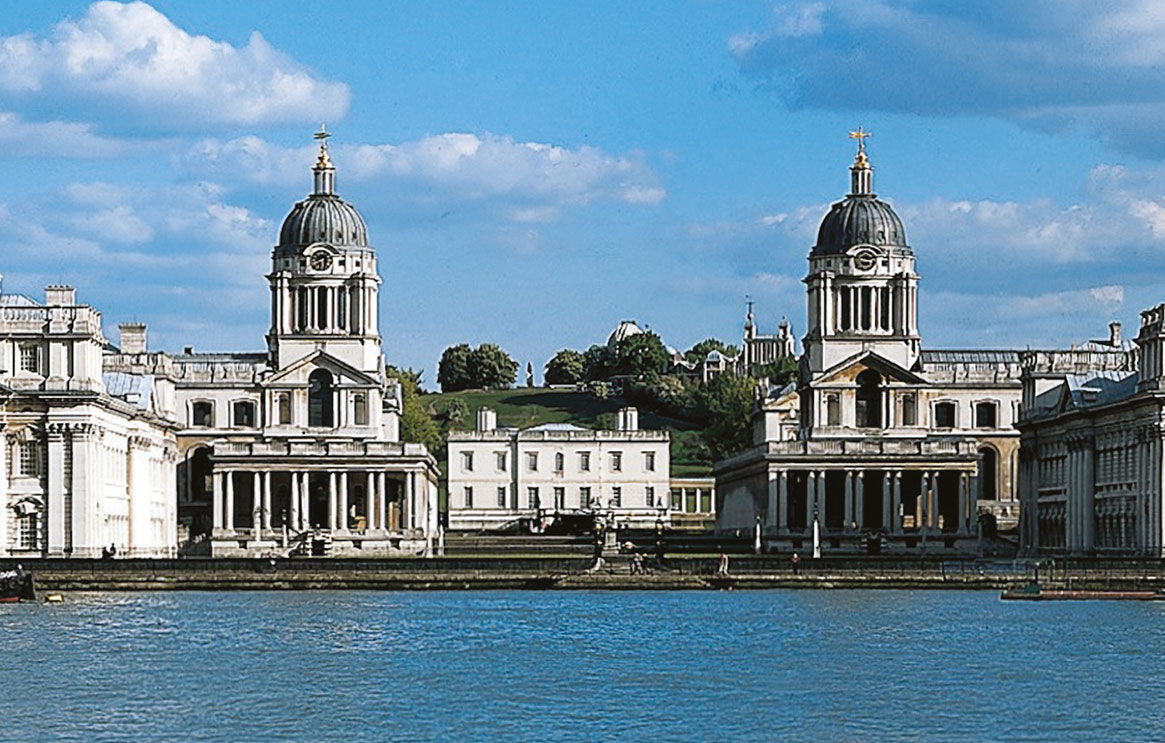 This exquisite Norman church, survivor of the Reformation and the Great Fire, stood in as Nottingham Cathedral in Robin Hood: Prince of Thieves. It was where Joseph Fiennes, prays for forgiveness in Shakespeare in Love, where Lord Blackwood is apprehended while preparing a human sacrifice in Sherlock Holmes and where Hugh Grant fails to marry ‘Duckface’ in Four Weddings and a Funeral.

Oxford colleges have provided both inspiration and locations for a host of British films.  Shadowlands tells the story of CS Lewis and his relationship with an American poet. In the film, Lewis’s college Magdalen and its 15th century chapel, feature in a scene where the couple attend the May Day morning festivities – an ancient tradition celebrated by choristers of the College choir, who sing from the top of the chapel tower at dawn. The Eagle and Child pub, home to the Inklings writers group, also appeared in the film.

In 2007, Phillip Pullman’s Oxford-based literary trilogy was brought to the screen as the Golden Compass. The author’s former college, Exeter stands in as the fictional Jordan College.

The university town is the setting for The Riot Club, which tells the story of Oxford’s elite, tearaway bad boys and their activities as members of the infamous Bullingdon Club. 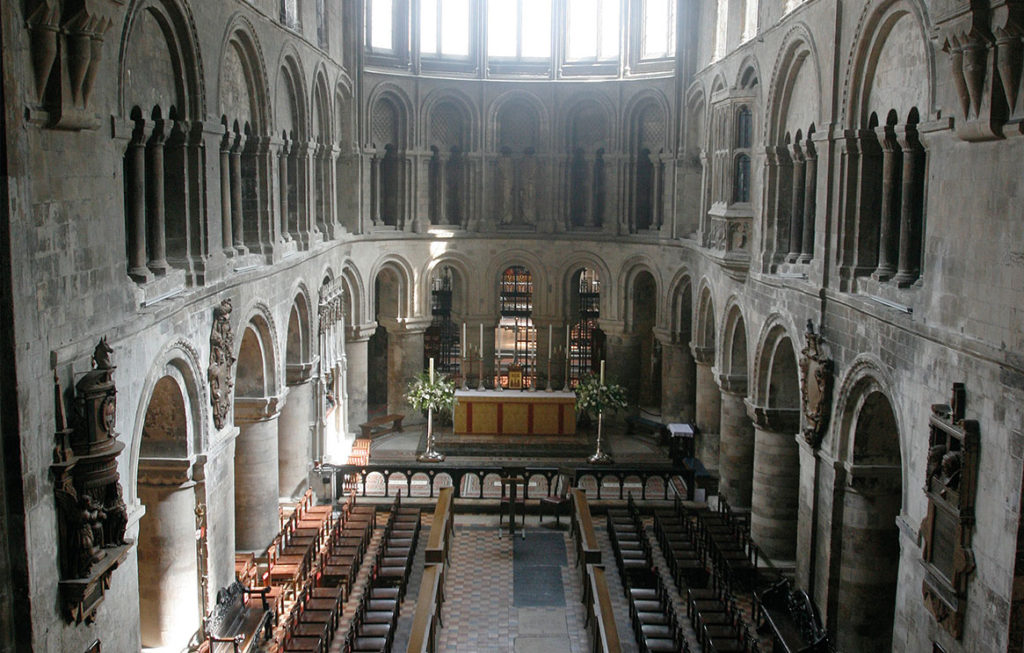 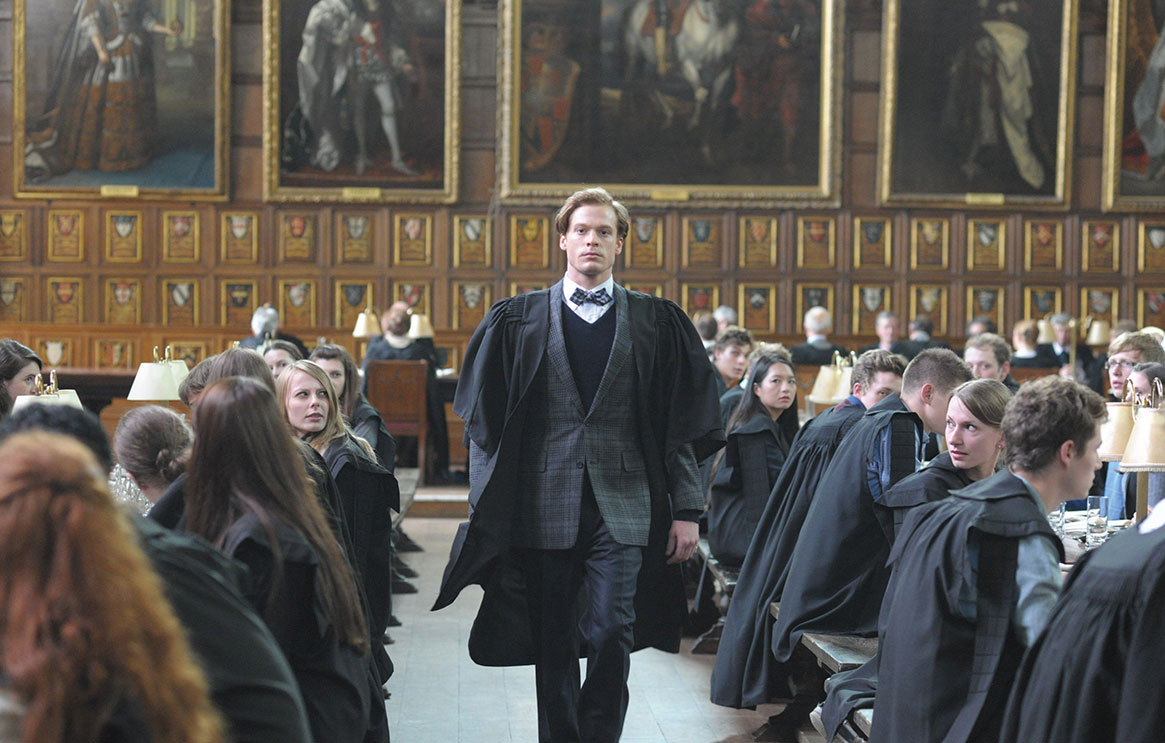 Liverpool is the chameleon of film locations, frequently disguising itself as other cities. For Jack Ryan: Shadow Recruit it was ‘Moscow’ in a night-time car chase, with the ‘Three Graces’ buildings and the River Mersey providing a ‘Russian’ backdrop. For Chariots of Fire much of ‘Paris’ is actually Merseyside. The British Embassy, where the Prince of Wales tries to persuade Liddell to run on the Sabbath, is Liverpool Library and Town Hall; the Paris Olympic stadium is Bebington Oval Sports Centre. Scenes for the 2011 action adventure Captain America were filmed at Stanley Dock and the city is the backdrop for Belfast in 71, a film set during the Northern Ireland troubles. 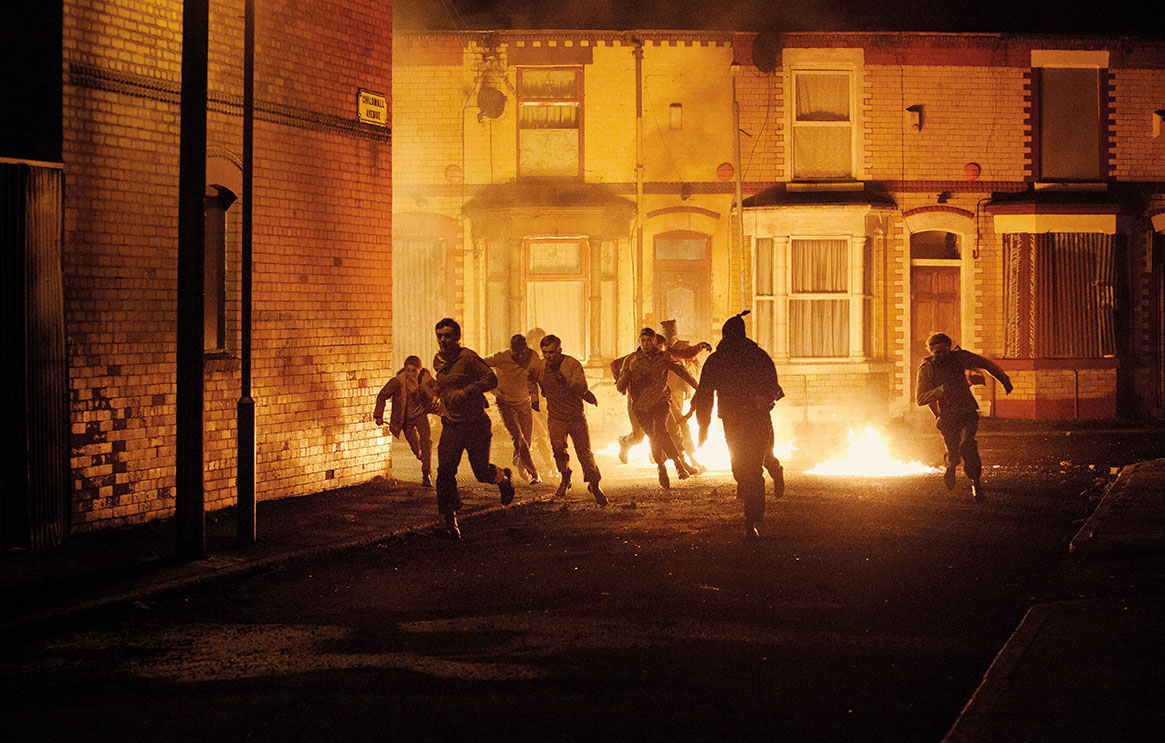 The current Brit-hit, Pride recreated the 1980s miners protest on London’s Westminster Bridge, while the upcoming film Suffragette, starring Meryl Streep as Mrs Pankhurst, is the first movie to be allowed to film inside the Houses of Parliament. 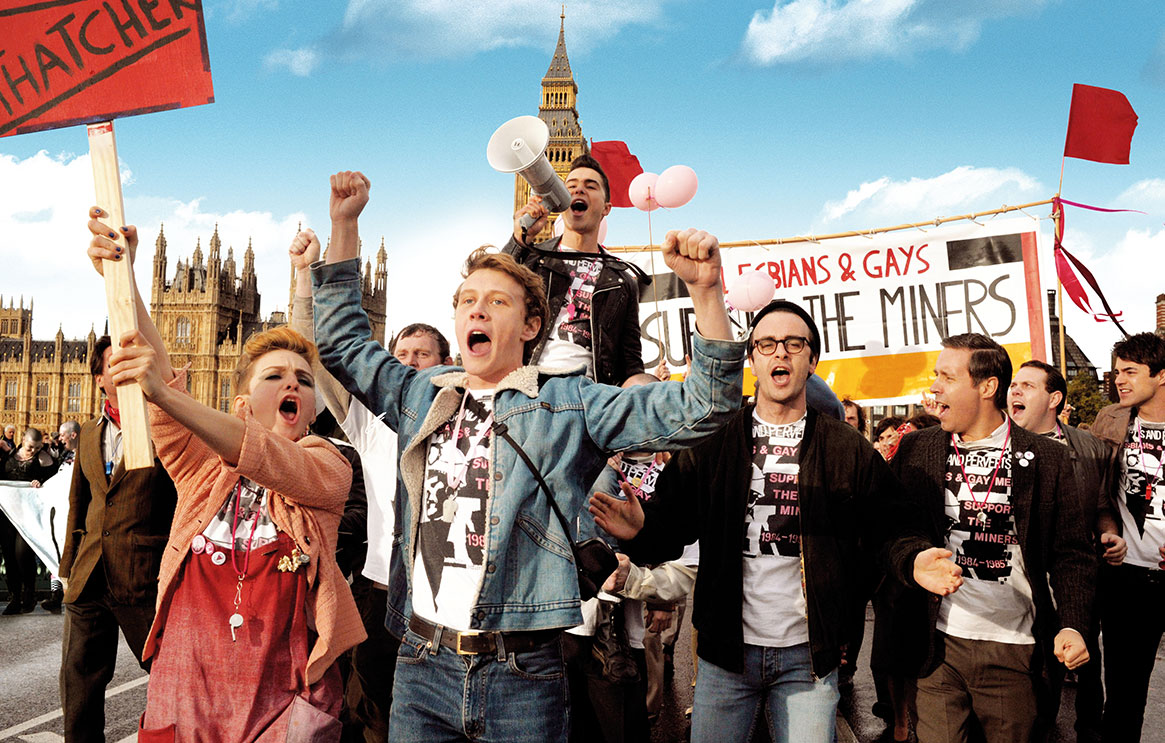 Manchester Town Hall, with its iconic Gothic Revival interior, regularly stands in for the Houses of Parliament. It posed as the Palace of Westminster for Robert Downey in Sherlock Homes (2009) and in the Margaret Thatcher biopic The Iron Lady. It also features in the upcoming Frankenstein, starring Harry Potter actor Daniel Radcliffe. 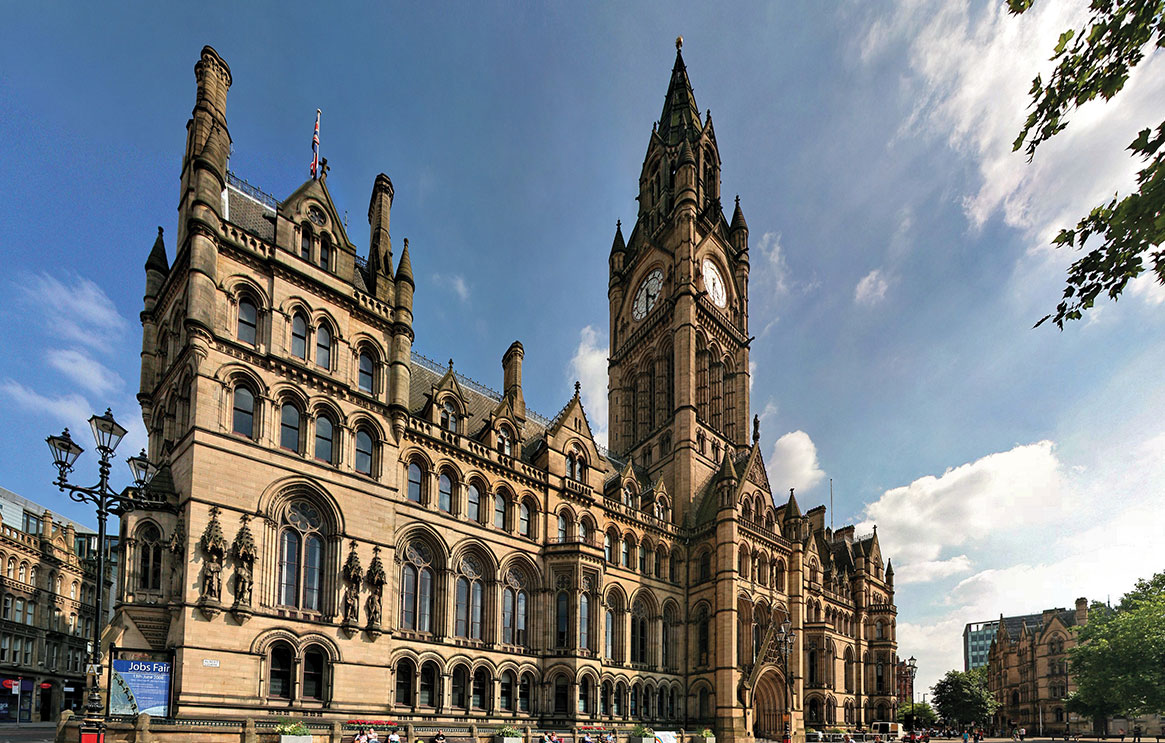 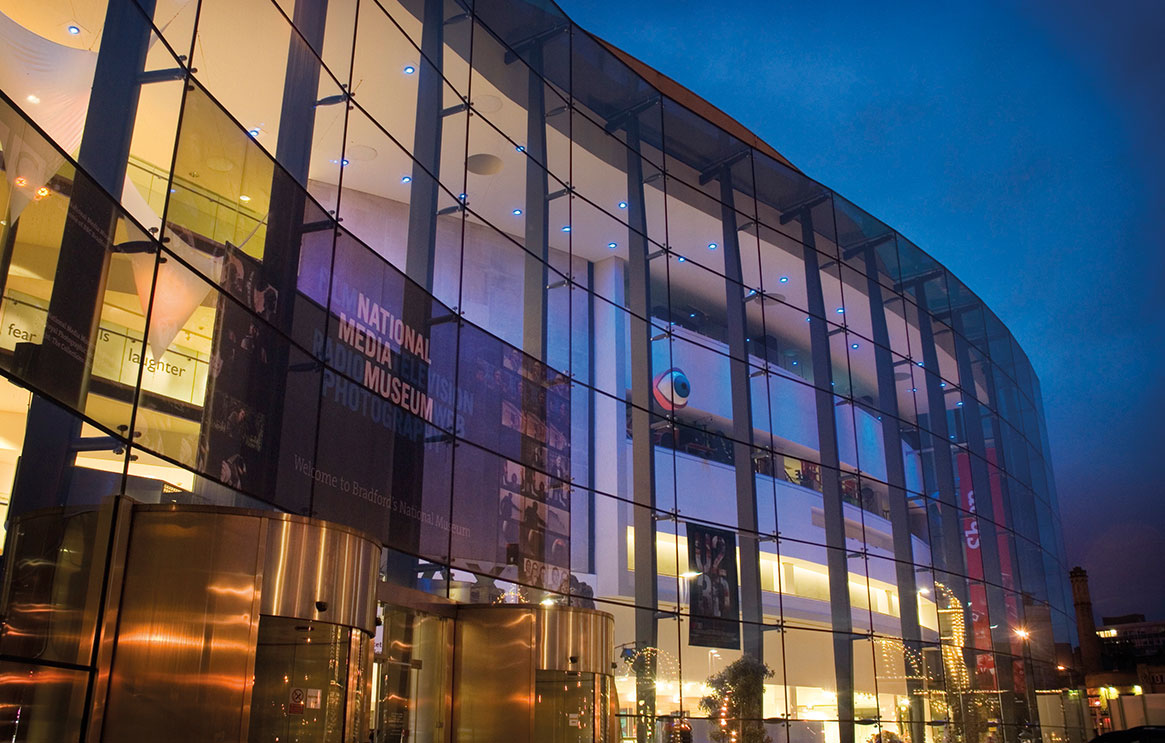 Agnes May Turner on a swing, 1902. The stills from a film made by photographer and inventor Edward Turner are the earliest existing examples of colour moving pictures. Teeth worn by Christopher Lee as Count Dracula. The actor designed and wore these fangs in the 1958 Hammer Horror film Dracula. When he broke a container of red fluid on the fangs, ‘blood’ dripped from the ends of the teeth. 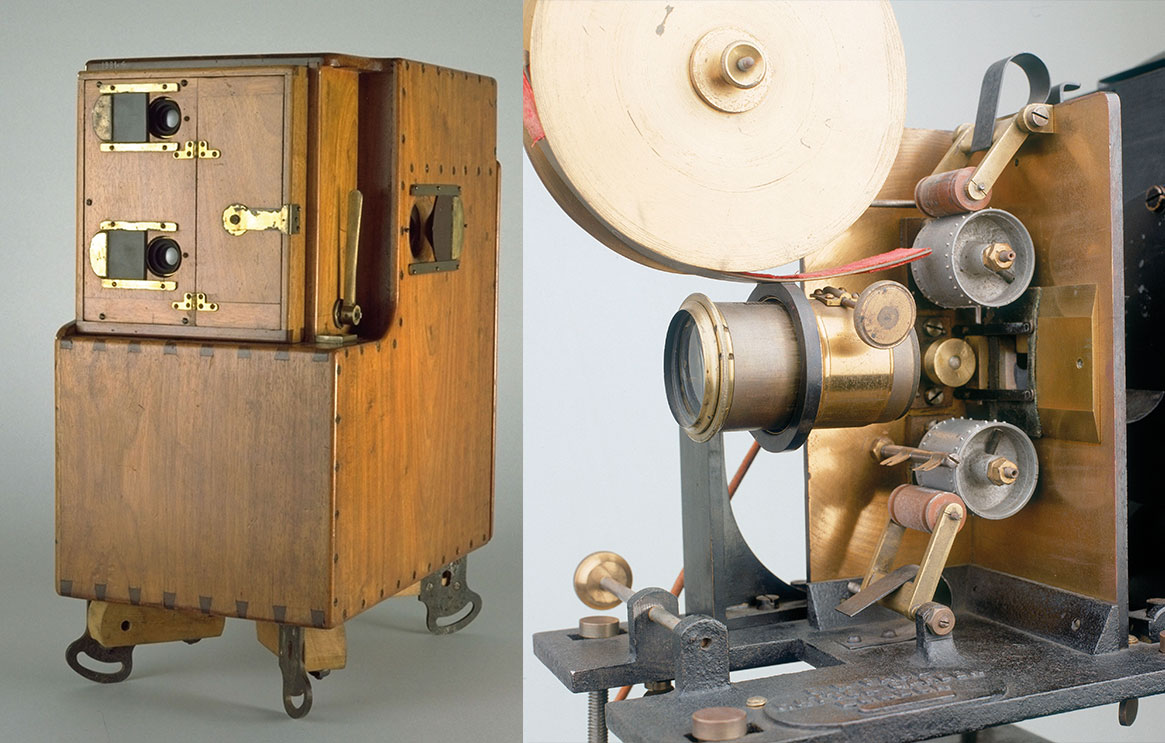 Theatrograph Projector Mark 1, 1896. Robert W Paul first demonstrated his projector at Finsbury Technical College in 1896 (on the same day as the showing of the Lumière Cinematographe in London). It’s the prototype for all modern film projectors. Lantern slides from the Polytechnic Institution, London. From 1850 the Polytechnic in Regent Street was renowned for its lantern shows. Huge lanterns projected large, hand-painted slide shows. This was ‘cinema’ before the moving picture was invented. As well as the permanent exhibitions, the media museum has three cinemas – including an IMAX screen – and hosts two film festivals each year.  www.nationalmediamuseum.org.uk

This central London museum is currently hosting Bond in Motion, an exhibition of vehicles from the James Bond films. Highlights include a scale model of the Westland helicopter featured in Skyfall and iconic Bond cars such as ‘Wet Nellie’, the Lotus Esprit S1 from The Spy Who Loved Me, the Rolls-Royce Phantom III from Goldfinger and the Aston Martin DB5 from GoldenEye.

Seen the film? Want to stay in the location? Here are some historic movie venues you can sleep in. A Gothic Temple, built in 1741 to a design by the architect James Gibbs, dominates the gardens of Stowe in Buckinghamshire. It features in the Bond film The World is Not Enough, where Bond attends the funeral of Elektra’s father.

At first glance, Oxenford Gatehouse in Surrey looks like an ancient building. It was actually built in 1843 by Augustus Pugin, architect of our national parliament building. Pugin’s medieval confection is so authentic that it appeared as the home of Maid Marian in the Russell Crowe Robin Hood film. 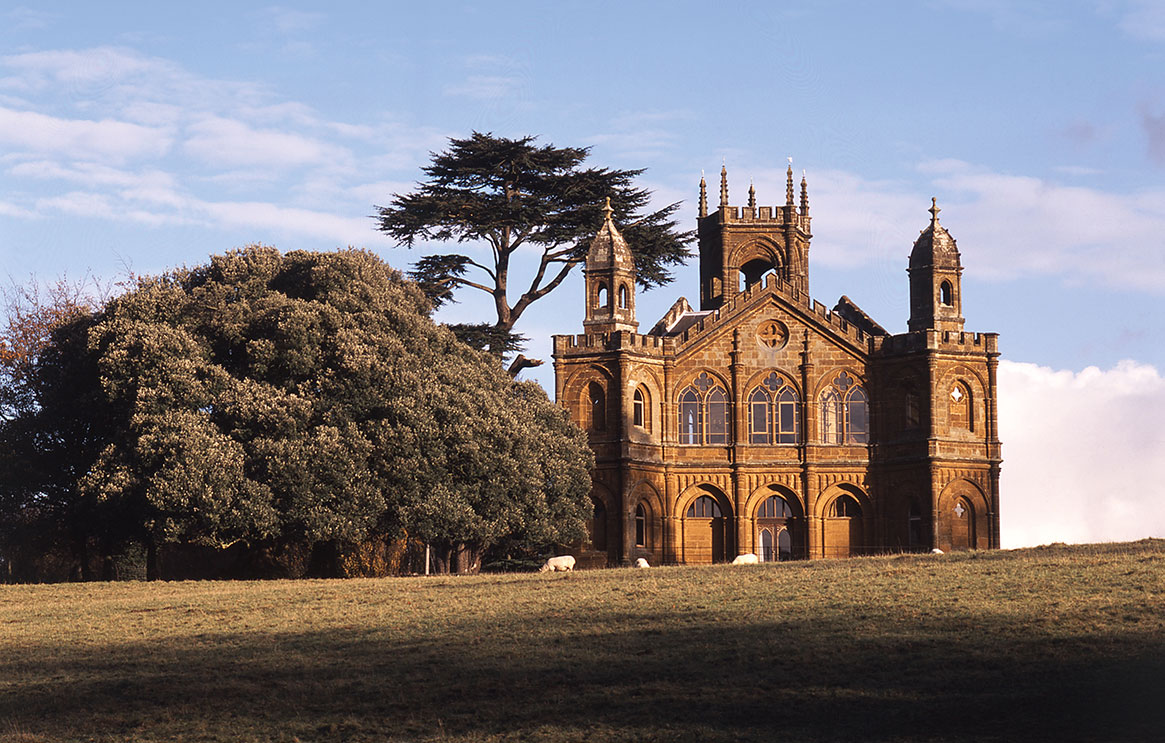 College Hill House near Edinburgh featured in the climactic scenes of the 2006 blockbuster The Da Vinci Code. To stay in one of these buildings visit: www.landmarktrust.org.uk You will be contributing to the trust’s mission to restore and preserve historic buildings in the UK. 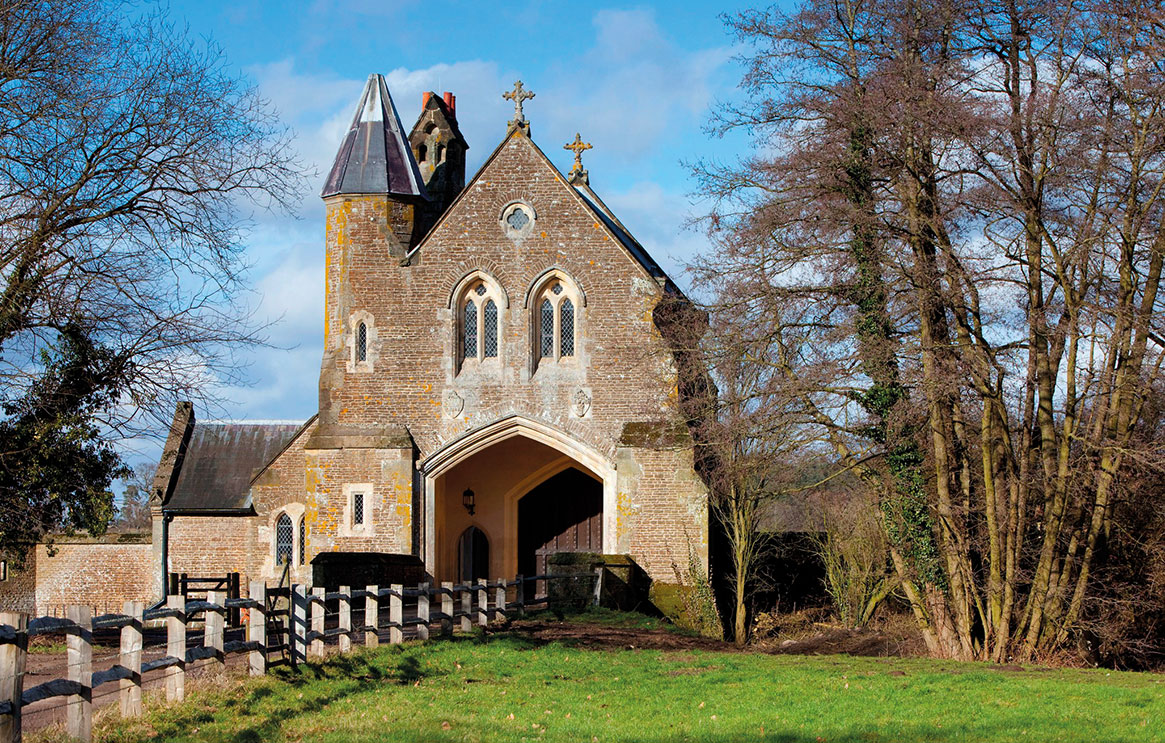 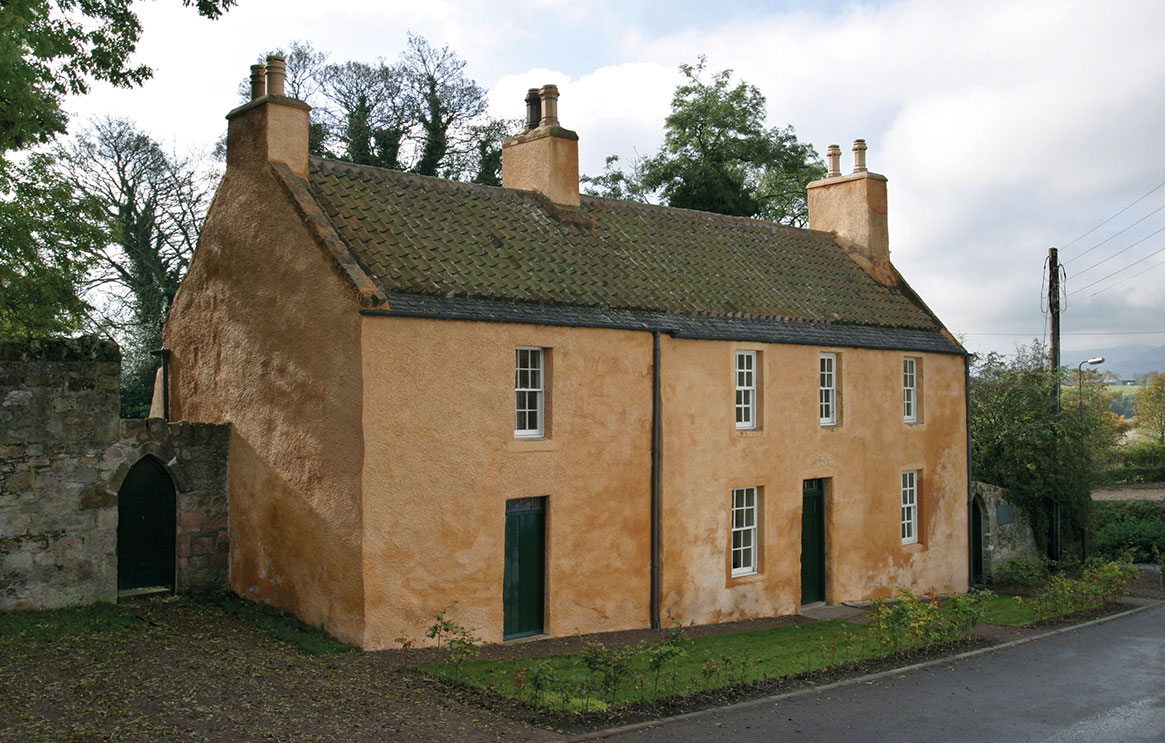