Read more about me:

I was born on a working hill farm near Coniston Lancashire but in 1974 the new county of Cumbria was formed out of parts of Lancashire, north of the Sands (Morecambe Bay) Westmorland and Cumberland so I am a true Cumbrian girl. My children were also born on a farm initially in Staffordshire and latterly brought up in Cumbria with Labradors, Herdwick sheep, and Galloway cattle. I love the outdoors, anything to do with Cumbria and nature, travel, friends and reading in the very little spare time I have. Now, my children, farm, run a Clay Pigeon Shooting and Fishing Ground and a 65-bed hostel in Kendal leaving me time to take guests on tour. It would be my pleasure and honour to take you on one of my "Experience Lakeland" Days or a tour could be organised for your own or your groups' personal interests.

I have over 30 years’ experience in travel, leisure, and tourism from running a farm caravan and camping site, being Company Secretary at Trentham Gardens, establishing a Clay Pigeon Shoot and Fishery, Tour Managing UK and Europe, owning and running a 65-bed hostel and becoming a Cumbria Blue Badge Guide. I now own and run a specialist tour operator in Cumbria which is well on the way to being Europe’s number one rural tourism destination and through Experience Lakeland I aiming to be the number One Tourism Guide in the area.
Cumbria is home to the English Lake District and is predominantly a rural county, considered the most beautiful county in the UK and now home to Two UNESCO World Heritage Sites.

A tour with me would give you an insight into the life of the locals, farmers, activity providers, hospitality, stately homes and castles, local food and drink producers, sharing the views as well as having an enjoyable and informative day. Did anyone say Food and Drink? That can be included too. See the real Cumbria.

I studied Agriculture at Leeds before working for the National Farmers Union in Buckinghamshire and winning a scholarship to study Agriculture in Australia and New Zealand. Coming back to the UK and after a brief spell in Harrods London (when the IRA bomb went off in 1983) I then worked in Canada milking dairy cows. Always trying to return north I worked with the NFU in the West Midlands and it wasn’t till my first child was born I was able to return to my native Cumbria by buying a small hill farm. My second love is tourism and when the children were studying for their GSCE I obtained an MA in Travel and Tourism and followed this 2 years later by training to become a Cumbria Blue Badge Guide.

Previous guests have included groups, individuals, couples and families both local and from all over the world including the USA, France, China, Japan, Ireland, Spain, Australia, Ireland, and Italy. Guests vary in age and requirements, but I am generally able to tailor a tour to suit everyone’s needs from a gentle stroll in the countryside to an action-packed day of off-roading to afternoon tea in a stately home.

I am equally at home with families or groups and my desire to inspire you not only to come back again but to bring your friends with you. My motto is “If I don’t look after you someone else will” 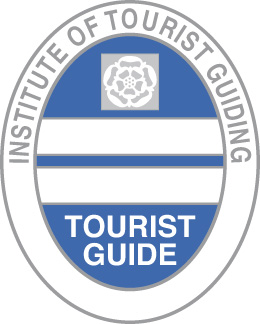