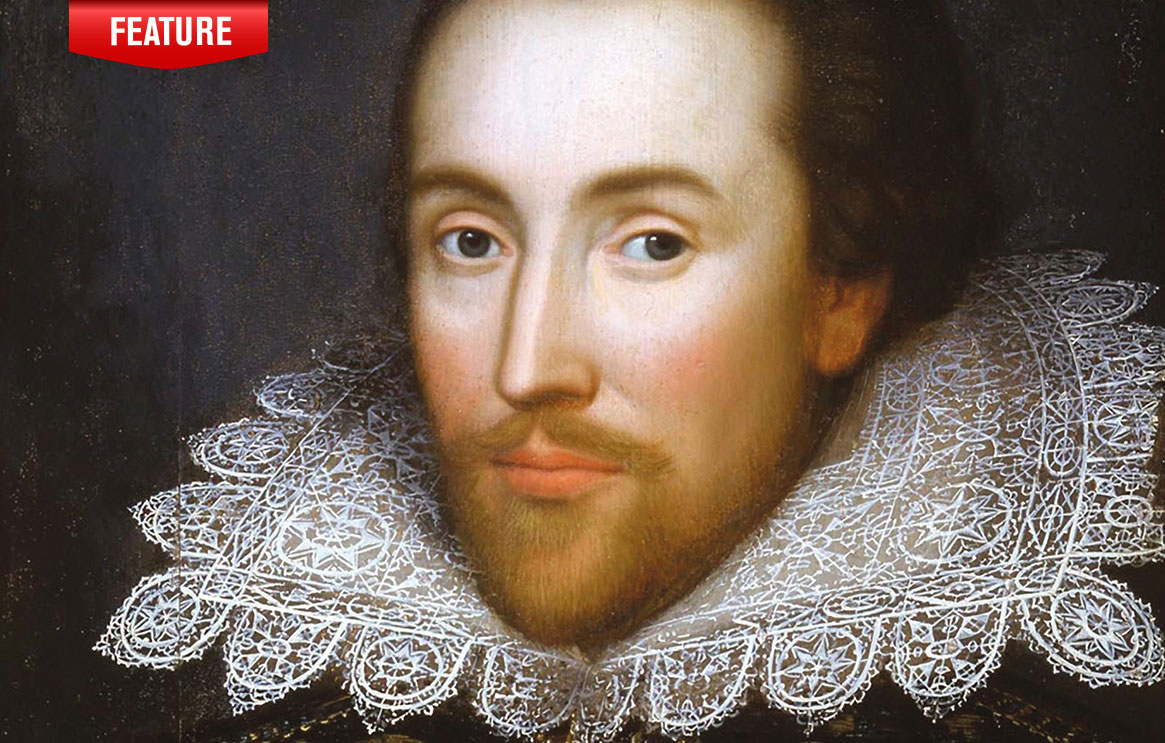 On April 26th 1564 there was a christening in the Holy Trinity Church, Stratford. The parish register records the baptism of Gulielmus Filius Johannes Shakespeare – William the son of John, a flourishing merchant soon to be the bailiff (or mayor) of Stratford.

According to local tradition, baby William would have been carried into the church by John, accompanied by the godsips (chatty female godparents, the origin of the word gossip, first seen in Shakespeare). A chrism-cloth of white linen was placed on the child’s head. If the infant died this became his shroud. One in ten Tudor babies perished in the first week, but Will was a vigorous child – at three months he survived the plague which killed several of the Shakespeares’ neighbours.

The family lived in one of Stratford’s ‘goodly’ houses; an oak framed building, home to John’s glove making business. William grew up alongside the bloody sights and foul smells of leather working; calf, sheep and kid skins were cleaned and dried in the backyard, with the finished gloves, purses and bags sold from the front of the house.

Age seven William would have been a pupil at the King’s New School. The building – still a school today – features a long, narrow hall with an oak ceiling. Tudor studies started at 6am. The boys brought candles for light and fuel to keep warm. At 9am they ate a breakfast of bread and ale, the lessons continued until 11am. William walked home to dinner – about 5 minutes – then back to school at the 1pm bell for afternoon studies until 5pm. Six days a week. Shottery is a mile outside Stratford. Shakespeare walked through fields and farms to visit a farmhouse in this hamlet – the family home of his future wife, Anne Hathaway. 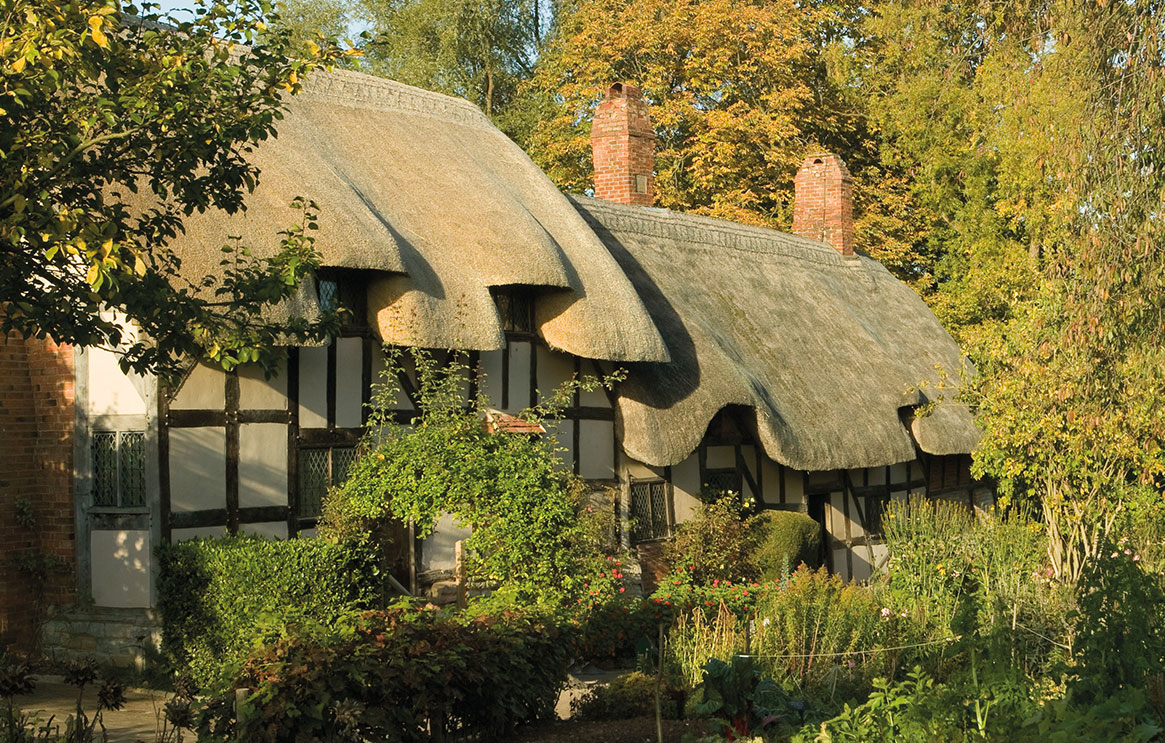 Anne was the eldest daughter of the house. As such, she would have learned how to bake, brew, prepare meat and tend the farm animals. We know nothing of Anne’s character and there are no portraits of her. It’s unlikely she could read or write, as 90% of females were illiterate. So the greatest dramatist in the world was married a woman who couldn’t read his life’s work.

Anne was eight years older than William and three months pregnant by the time of the wedding. There is speculation that this was a forced marriage, but it was common for couples to have a handfasting ceremony – an official betrothal – prior to church service. 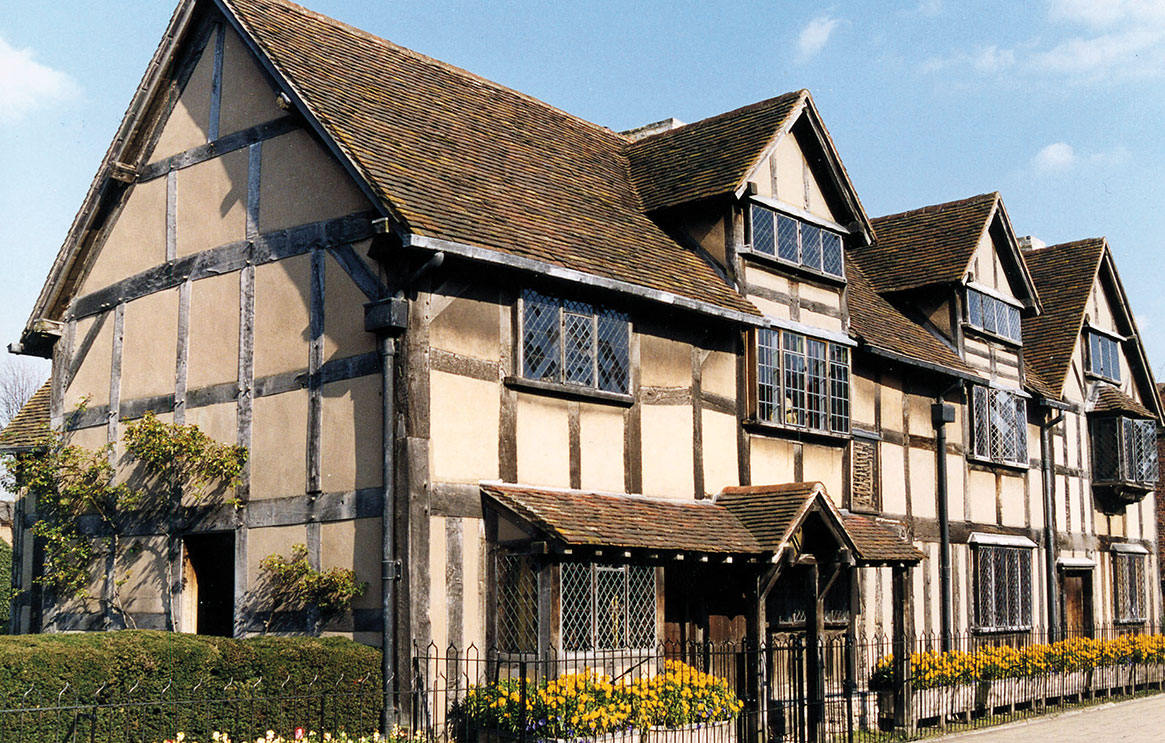 William and Anne were married in 1582. The Shakespeares’ first child Susanna was christened in May 1583, and twins arrived in January, 1585. But Will’s thoughts had turned to London, and the new playhouses that were thrilling the metropolis.

In 1596 Shakespeare was granted a coat of arms – he was now a gentleman. William was one of very few Tudor writers who moved up the social classes.

In 1597 he paid £60 for one of the finest houses in Stratford, New Place. In Elizabethan England a servant earned £2 a year and a schoolmaster £20, but William’s income as coowner of The Globe theatre had made him wealthy.

By 1613 Shakespeare had written his last play. Retired from the theatre, he returned to his native Stratford. As a man of property and title who had performed for the royal court – everyone in town would have known William Shakespeare.

In January 1616 Will wrote his will. In April, legend has it, he enjoyed a ‘merrie meeting’ with his fellow writer Ben Johnson where he drank too much wine and ate too many pickled herrings. He sweated, caught a cold, and died – probably on the 23rd April, his 52nd birthday.

The parish record tells us that on the 25th of April he was buried in the church where he was baptised. On his gravestone an anonymous rhyme curses anyone who would move his bones.

Elizabethan London was a potent, prosperous and perilous metropolis. Newcomers flooded into a city which grew from 70,000 to 200,000 inhabitants during the Queen’s 45 year reign.

Londoners loved spectacles: from the public hangings and beheadings, the fairs and processions, to the bear, bull and cock fights – chilling and thrilling distractions from their hard, short lives.

In the 1570s there was a new entertainment in town: the playhouse. The queen had granted permission for the first public theatres – previously the actors worked the inns and halls. The first was The Theatre, erected in 1576 in Shoreditch, just outside the city walls (plays were prohibited in the City). Within a year it was joined by the neighbouring Curtain Theatre.

Young William Shakespeare arrived in Shoreditch in the 1580s. The first record of his life in London came in 1592, when a jealous rival playwright denounced him as an ‘an upstart crow’.

The upstart crow was flying high. By late 1594, he was part-owner of a theatre company, the Lord Chamberlain’s Men. Working at The Theatre and The Curtain, they gave the first performances of Romeo and Juliet and Henry V.

In 2008 archeologists from the Museum of London discovered the remains of The Theatre, just off Curtain Road in Shoreditch. Four years later, in 2012, the museum uncovered the remains of The Curtain. There are plans to create public access to both of these discoveries; this year work starts on a public square, park, museum and exhibition on the Curtain site and a project is in place for a new playhouse and exhibition over The Theatre. A few hundred yards away is another tantalising Shakespeare site: St Leonard’s Church. Beneath the current 1740s building are the remains of a medieval church that served the local theatres. Burials include Henry VIII’s fool Will Somers, James Burbage – the founder of The Theatre – and his son Richard, a leading actor and the first man to play Hamlet, Othello, Richard III and King Lear and actor Gabriel Spenser, who was killed by Ben Jonson in a duel in Hoxton. Further archaeology and investment is needed to conserve this monument to the birth of English entertainment. 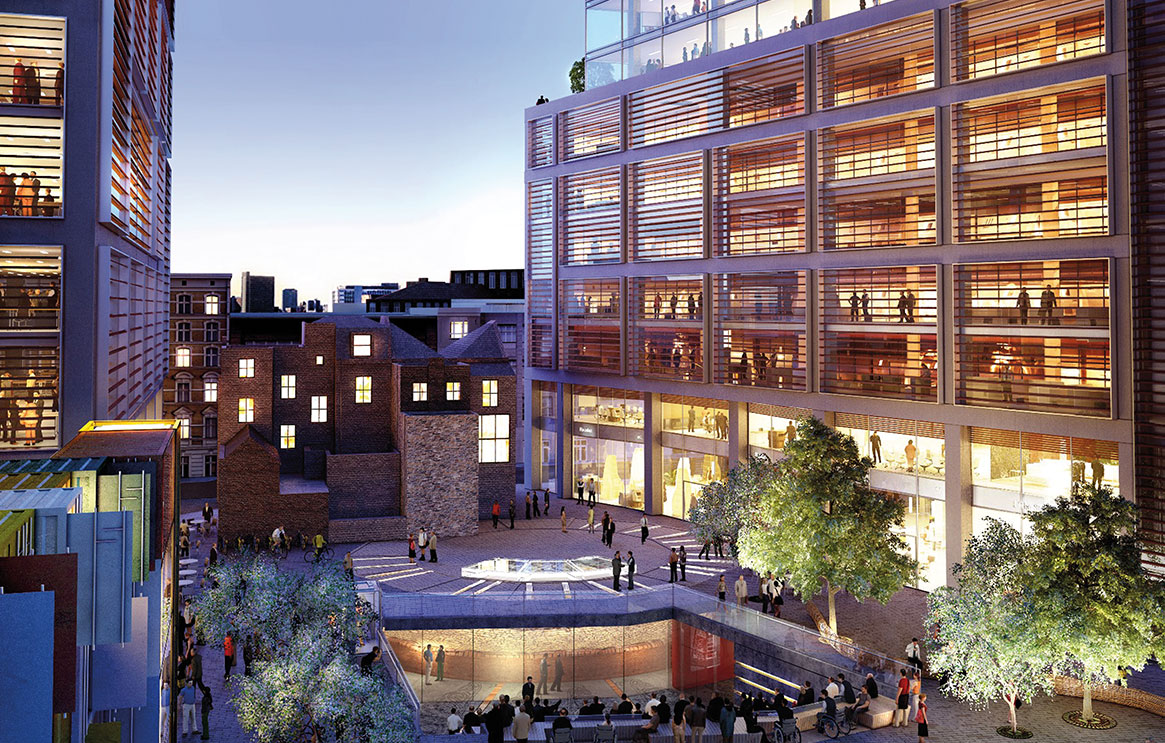 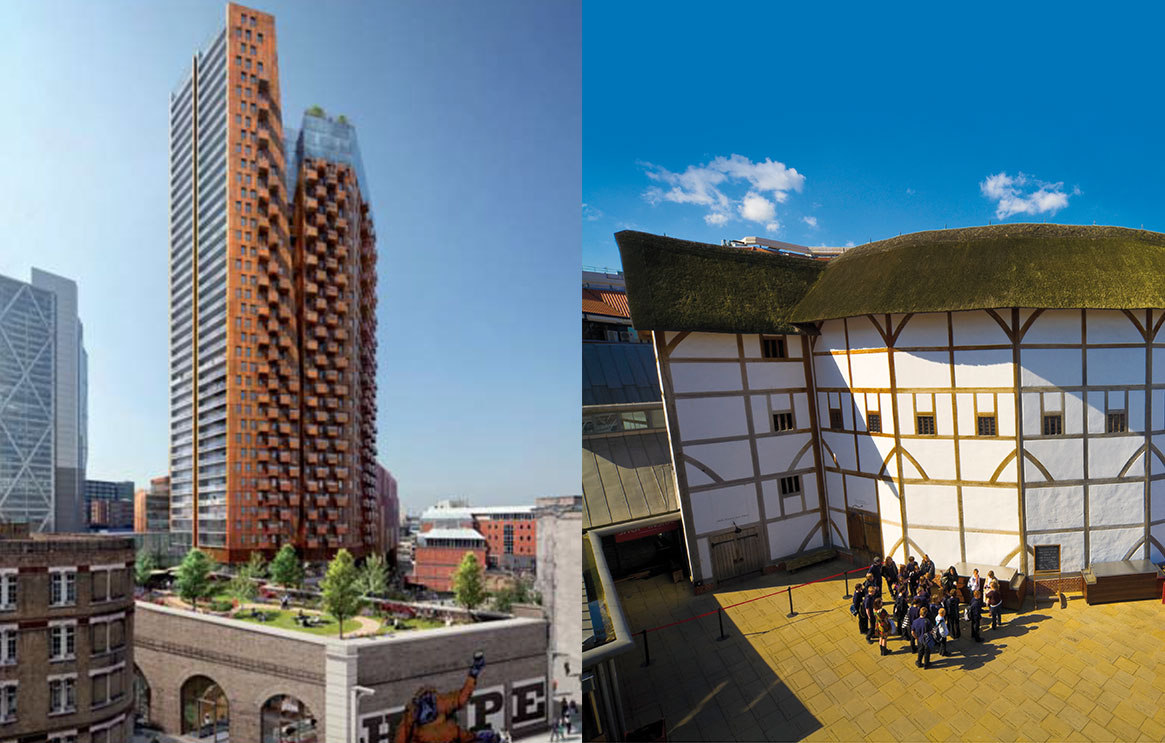 In 1599 the lease on ‘The Theatre’ ran out. The round wooden playhouse was plucked apart and rebuilt on the south bank of the river Thames. This new theatre, called ‘The Globe’, was managed by its actor-shareholders, including Shakespeare.

Bankside was where Londoners went to lose themselves in the brothels, taverns and theatres. It was home to several playhouses including the Globe’s fierce local rival, ‘The Rose’ – where many of Christopher Marlowe’s plays were first performed.

Every day, thousands of Londoners crossed the river to see the plays. Some 2000 packed into ‘The Globe’, where Hamlet, King Lear and the Tempest were first performed. The working people paid one penny to stand in the yard – they rarely bathed and usually only owned one set of clothes, they were known as the penny stinkers. For two pence a gentleman had a seat in the gallery, and another penny bought him a cushion to sit on.

In 1613 during a performance of Henry VIII a sound-effect cannon misfired, igniting the thatched roof. The theatre burned to the ground, but no one was hurt except a man whose burning breeches were put out with a bottle of ale. The theatre was rebuilt the following year.

In 1997 The Globe raised its flag once again. This was the vision of Sam Wanamaker, an American director an actor who came to London in the 50s and was shocked to discover that Shakespeare’s theatre had no significant memorial. It took over 20 years of fundraising before the third Globe, a working reconstruction of an Elizabethan playhouse, opened its doors on Bankside, 50 metres from the site of the original theatre. 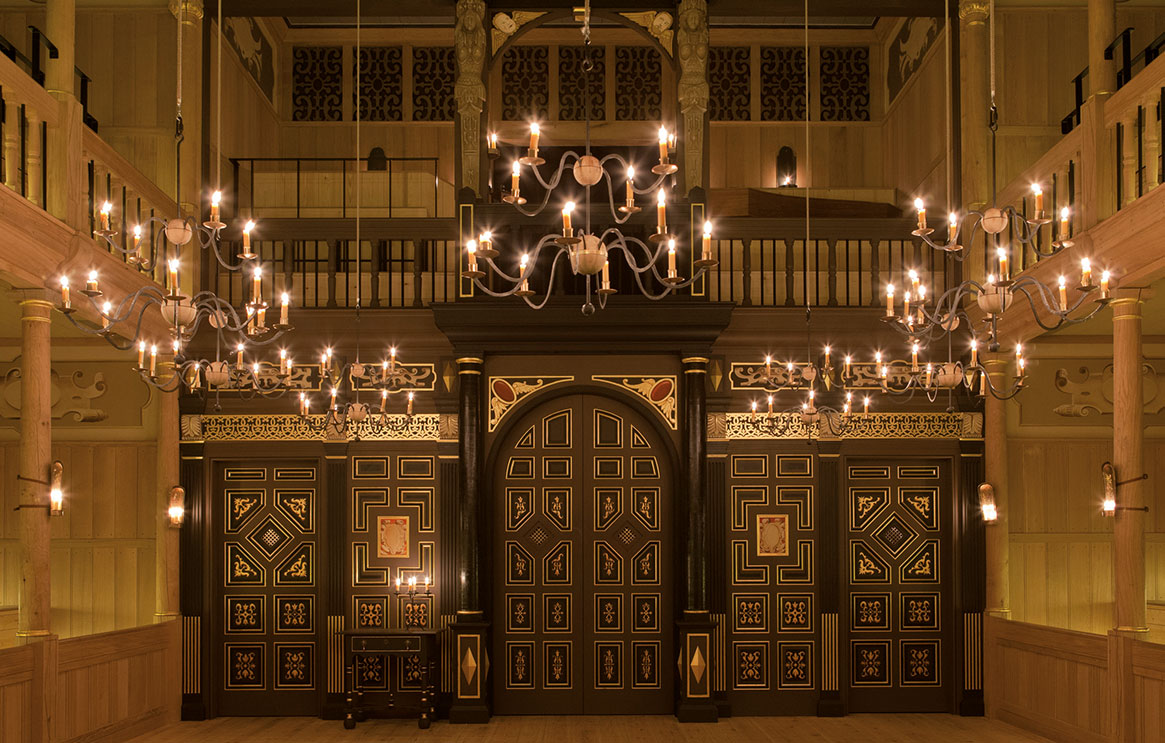 Wanamaker’s legacy is celebrated in the latest project at The Globe: a newly built Jacobian theatre. In 1608 Shakespeare’s company moved into the City, performing at Blackfriars in an indoor theatre (The Curtain, Globe and Rose were all open air).

The Sam Wanamaker Playhouse is based on original designs for a theatre from 1616. Crafted in oak and decorated with murals and golden stars, this 340 seat Jacobean jewel box is lit by candles. All signs of modernity evaporate inside this theatrical time machine; now Shakespeare’s later plays – The Tempest and the Winter’s Tale – will be staged in the only Jacobean theatre in the Britain.

Christopher Marlowe was an English dramatist, poet and (possibly) spy, who was baptised two months before Shakespeare, on the 26 February 1564.

By his early 20s he was Tudor theatre’s star writer – with plays such as Tamburlaine the Great and Dr Faustus. But Marlowe’s life is shrouded in mystery; with high level connections to ministers in Queen Elizabeth’s court, an arrest on allegations of blasphemy and a planned interrogation by the Privy Council which seemingly never happened.

On the 30 May 1593 he was stabbed to death in Deptford. The apparent reason, an argument over ‘the reckoning’ – a bill in a boarding house or brothel. His murder has spawned many theories and conspiracies: some say his death was staged, and Marlowe escaped the country to live abroad. There are even far fetched claims that he wrote Shakespeare’s plays.

For information on visits to Shakespeare’s Birthplace and Anne Hathaway’s Cottage go to www.shakespeare.org.uk

To celebrate the anniversary, Shakespeare’s Birthplace is presenting ‘Famous Beyond Words – Shakespeare all around us’ a new exhibition opening in March.

Cambridge Blue Badge led tours visit Corpus Christi every Thursday at 14.00. Tours include the Parker Library, the College’s Old Court (built in 1352, the oldest surviving Oxbridge College) a commemoration of Marlowe and the College Chapel. Tickets £9.00 per person. Go to www.visitcambridge.org

See our guided tours of Stratford.