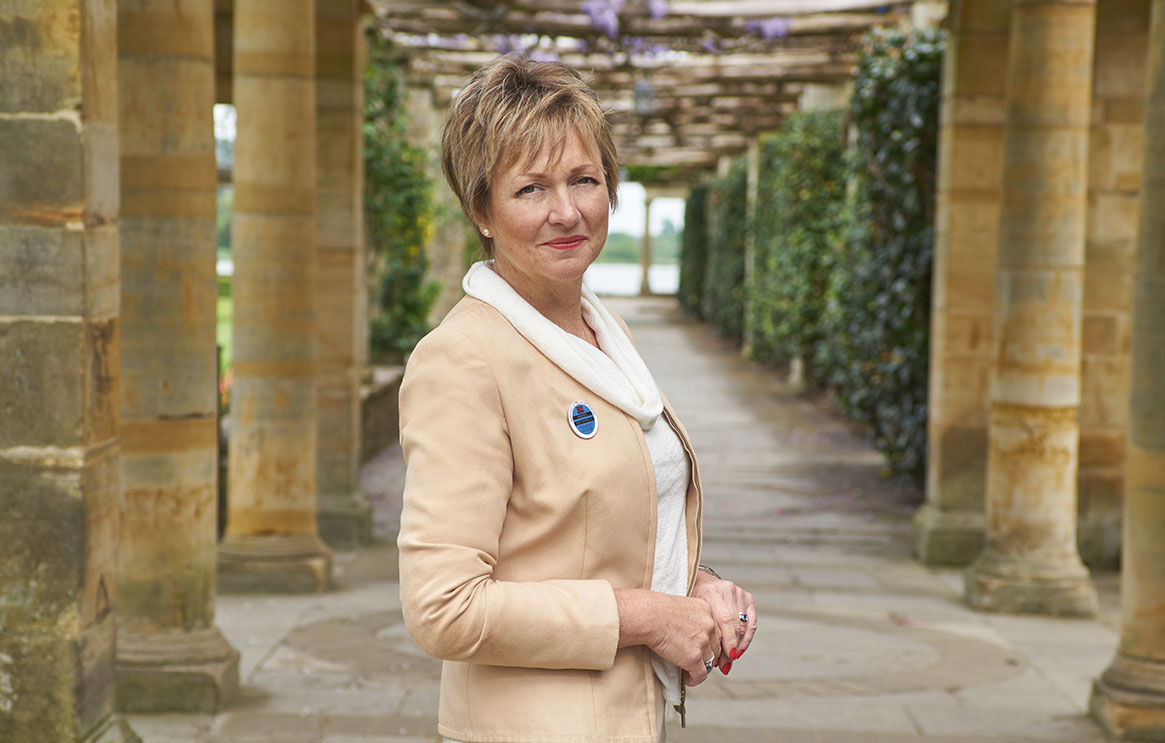 Up a bottleneck country road into a tiny picture postcard village near Canterbury is Dawn Blee’s favourite garden: “Chilham Castle is Kent’s best kept secret,” she says. “It’s a landscape painter’s dream, with a ruined fortress, topiary, terraces and a view through the trees to the village pub, church and square. “It’s all very ‘English’, but there’s a story that Chilham was built by elephants. The owner made his fortune in the East India Company and shipped two beasts back to England to do the heavy lifting on the estate. Apparently they are buried among the parterres.”

Dawn is a green-fingered enthusiast. On moving to the Kent village of Weald she converted an old tennis court into a chicken run and filled her garden with hardy rhododendron and azalea: “We live on a greenstone ridge and the only things that grow really well here are stones.” After qualifying as a South-East England Blue Badge Tourist Guide and winning the coveted Guide of the Year prize, Dawn started running garden tours. Where better to do this than in the county known as ‘garden of England’? “It was Henry VIII who brought pleasure gardens to Kent,” she says. “In the 1530s the king stayed in hunting lodges in the local area, hoping to bump into Anne Boleyn. He set up house at Penshurst Place, where he ordered a garden to be built. 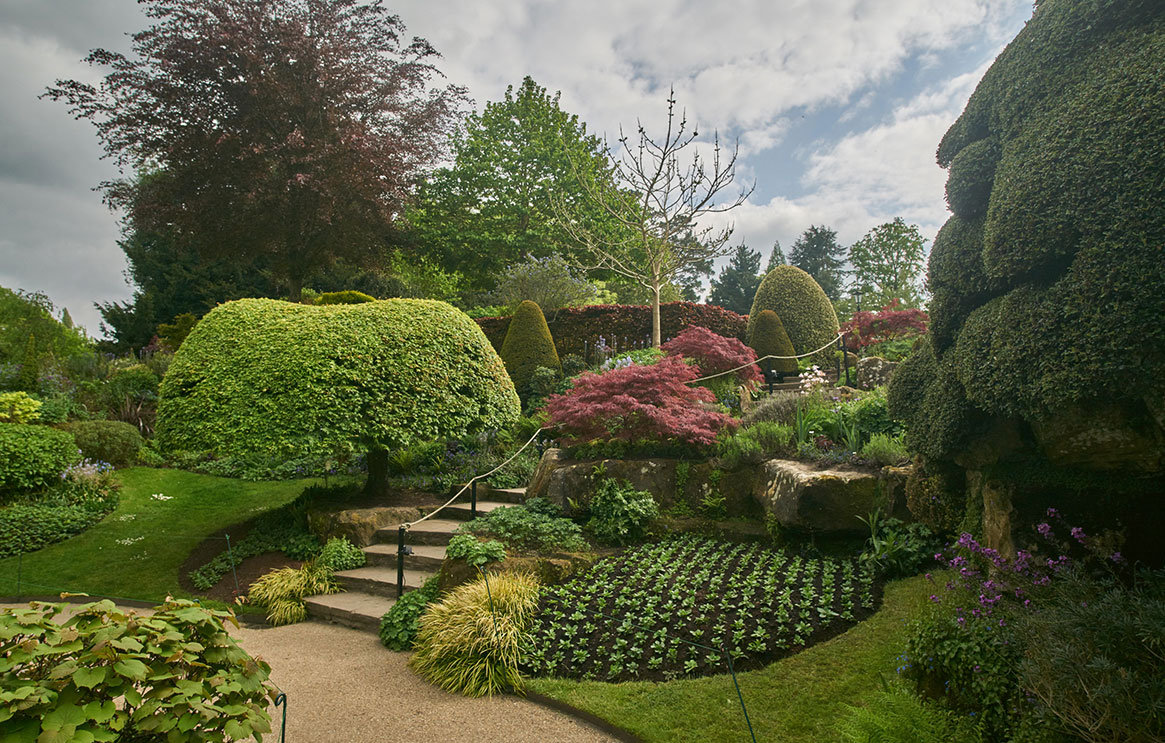 “Penshurst retains many features Henry would recognise: a knot garden, rose beds, shaded glades and secret rooms – perfect for courtly courting. The current owner, Lord De L’Isle, has extended the garden, replanting a patriotic union flag of red roses, blue lavender and white alyssum, and in summer an amazing maize maze. Hever Castle is just down the road from Penshurst. Once the Boleyn family home, during Anne’s time it had no great garden. But in 1903, William Waldorf Astor bought the castle. The American wanted somewhere to keep his collection of classical statues, so he built lakeside gardens filled with over a million pounds’ worth of plants – creating a little bit of Italy in the middle of the Weald.”

“Knowle is another of Kent’s Tudor palaces. Its 1000-acre deer park is a story of changing fortunes. Three centuries ago the second Duke sold off all its trees to pay off his gambling debts. The woods were regrown, but in 1987 the ‘Great Storm’ devastated the trees for a second time. Undaunted, the present owners planted some 200,000 saplings that are slowly maturing into new woodland. “Knowle will forever be associated with the writer and garden designer Vita Sackville-West. The young heiress had a passion for plants, but her family forbade her from entering the walled garden. Vita was denied her inheritance and Knowle passed to her male cousin. She eventually settled in Sissinghurst, where she and her husband created one of the most famous gardens in England.” 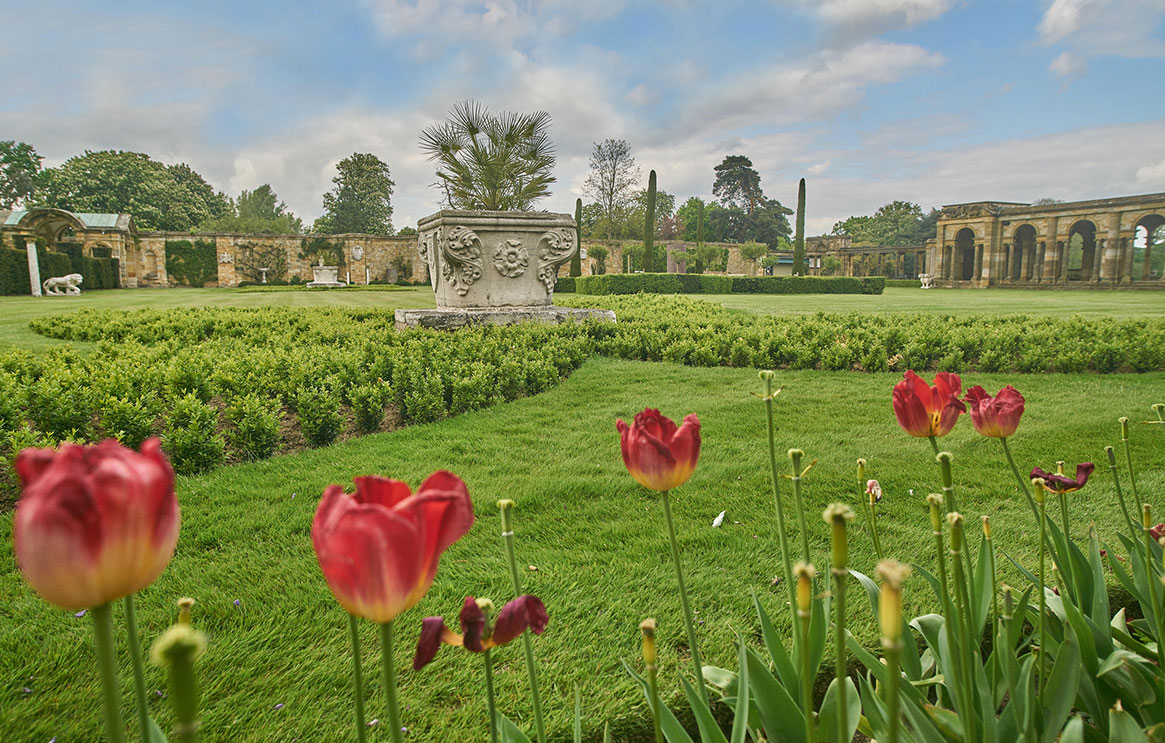 “Sissinghurst is divided into a series of ‘garden rooms’, each with its own character. I am always struck by the way the plants are mixed with different shapes and forms. It all seems so natural, but we know that Vita would climb up the old castle tower to study the landscape and plan her garden in three dimensions.  The white garden is Vita’s most famous creation. Its pearlescent flowers are outlined by blue leaves, in the evening it becomes a translucent paradise, sweet with scent. Vita wrote a gardening diary in the Observer newspaper, bringing her and Sissinghurst’s garden national acclaim. Her earthy, aristocratic style promoted one wit to describe her as: ‘Lady Chatterley above the waist, gamekeeper below’. Since her death the landscape has been preserved as a floral shrine to its creator – like Monet’s garden beyond the Kent coastline in Giverny.”

“Lullingstone Castle is a newcomer to Kent’s collection of castle gardens. It was inspired by Tom Hart Dyke’s kidnapping in the Panamanian jungle. Held for nine months and threatened with death, he kept himself sane by designing a walled garden in the shape of a globe. On his release, he returned to his ancestral family home where he realised his project. “Away from its castles and palaces, Kent has many fine domestic gardens. One of its most celebrated sits under the shadow of a nuclear power station on a windy pebble beach at Dungeness. Its creator was the film-maker and artist, Derek Jarman.”

“In the 1990s he set up home in a wooden beach house called Prospect Cottage and started experimenting with ‘extreme gardening’. With no soil, no boundaries and no hedges, the plants growing among the shingle are shaped by the sea winds. Jarman added garden sculptures with the flotsam and jetsam that washed up on the beach. People are amazed that anybody would or could make a garden here. It’s terrible terrain for domestic plants and flowers. But it is testimony to the Kentish passion for planting that there are gardens wherever you go in the county.” 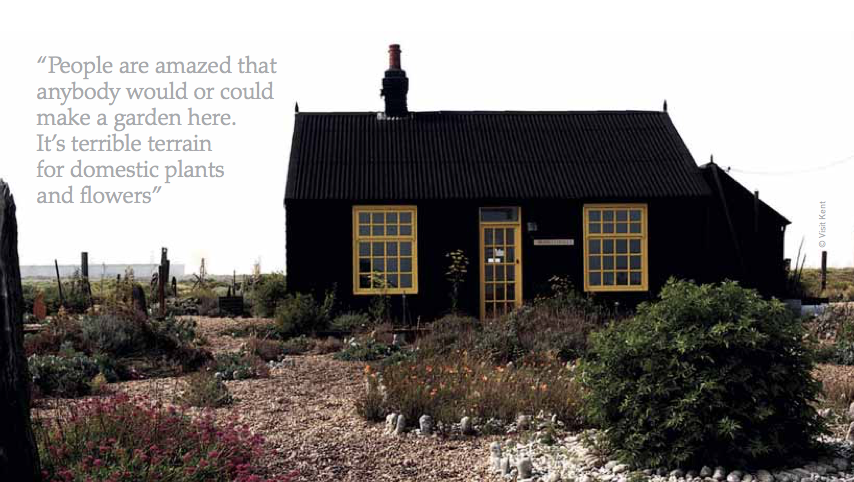