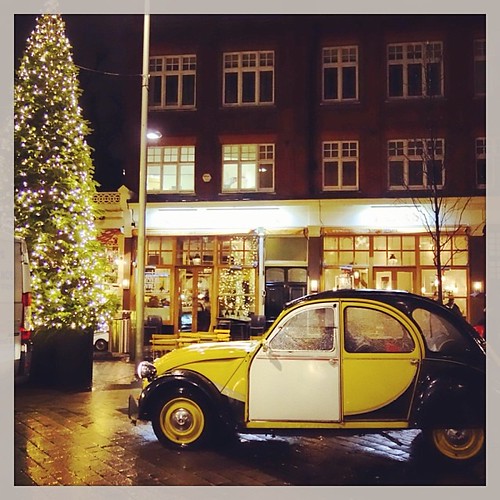 Pull the other one

Visitors to our shores are often mystified by the Christmas cracker. These garish table decorations are traditionally enjoyed over the Christmas lunch. They contain amusing little trinkets and paper hats and when the crackers are pulled they make a snapping sound similar to a child’s cap gun. Their origins aren’t particularly well-known but this is both a Victorian tradition and a London story. Nineteenth century City of London confectioner Tom Smith sold sugary bon-bons (candy if you’re on the other side of the pond) in twisted paper wrappers. Changing tastes and falling sales forced Mr Smith to have a re-think. Necessity being the mother of invention, he re-purposed his content in the 1850s, and created the Christmas cracker. 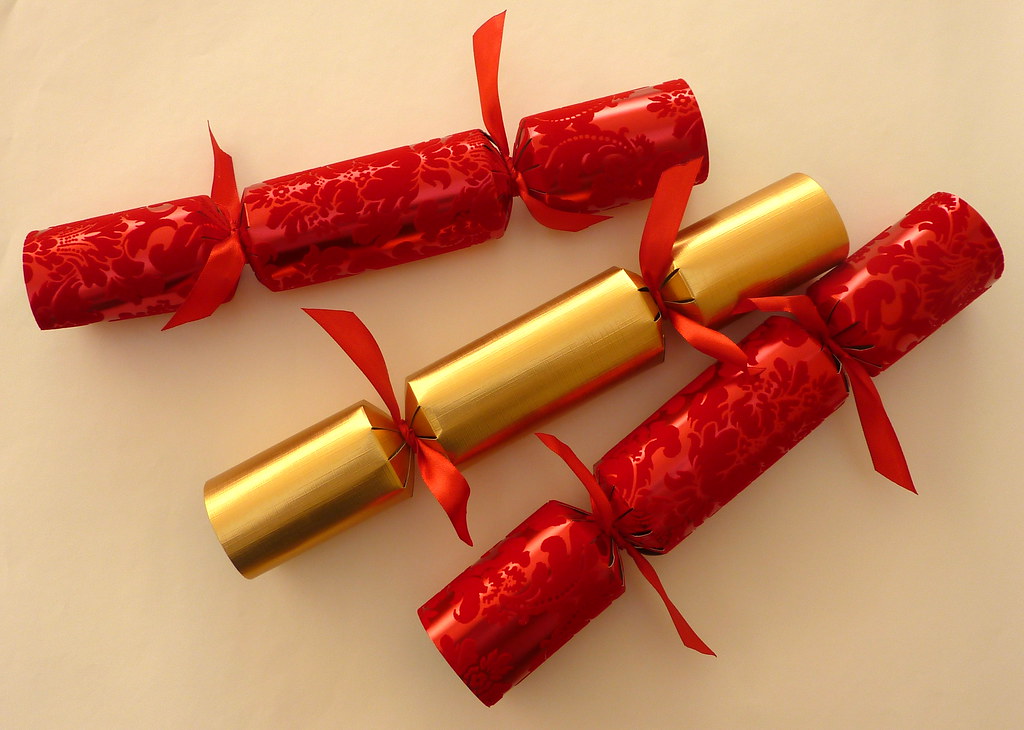 Those Victorians were a soppy lot. The first crackers didn’t contain Dad jokes as they do today. Instead they held tender messages of love. The percussive element of the package came later.  Smith got the idea of the cracker making a noise when being pulled open as he watched burning logs crackling away on an open hearth. It really doesn’t come more Christmassy than that. Tom Smith hasn’t been entirely forgotten. He built an elegant Portland stone drinking fountain near his cracker factory in Finsbury Square, in remembrance of his late mother. It somehow survives to this day, slightly abandoned in the otherwise featureless square. Few Londoners passing it would know of its link to this most British of Yuletide traditions. 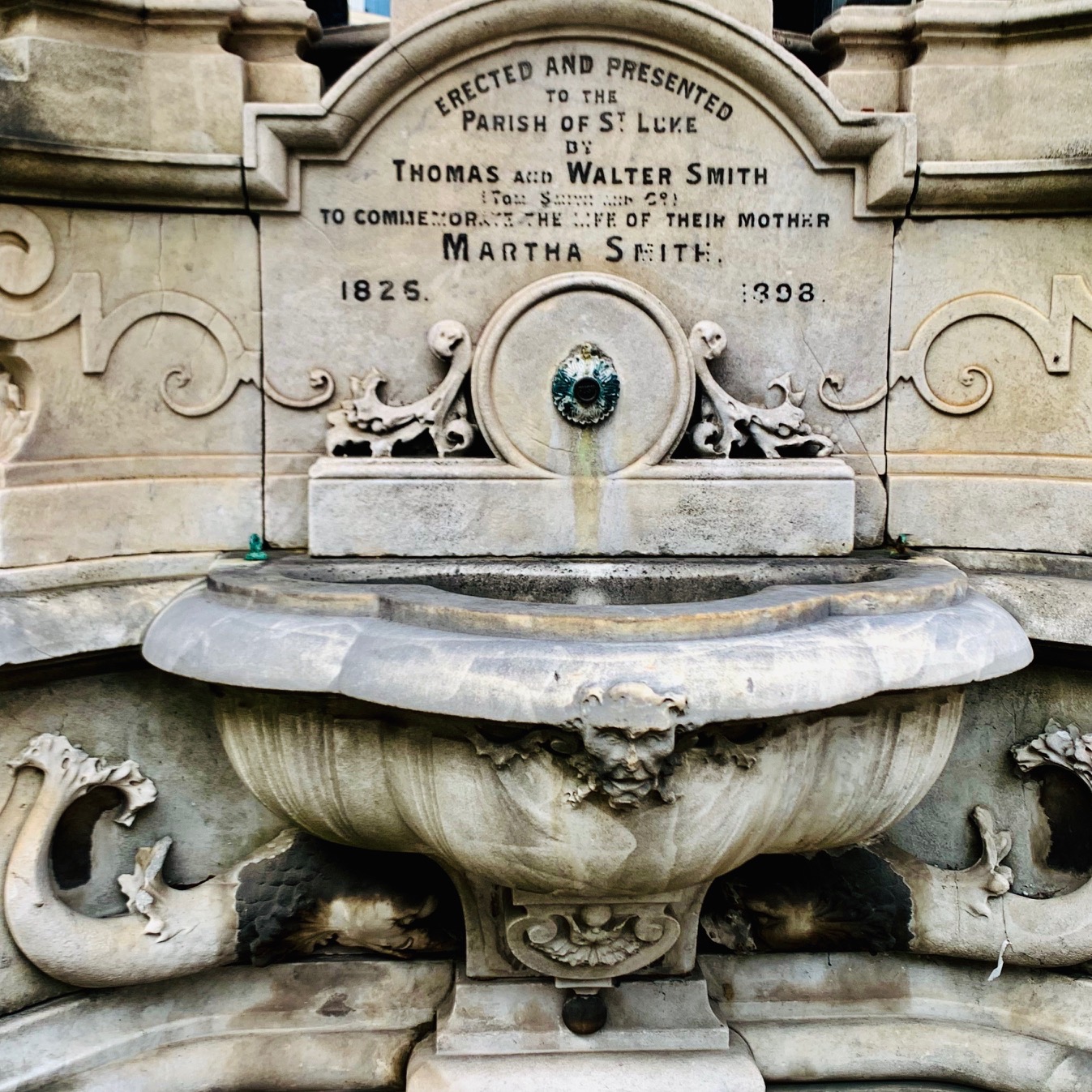 Inventor of the Chritmas cracker Tom Smith built the fountain in Finsbury Square. Image by @Meetmrlondoner

If you love a Dickensian feel to your Christmas then head east to Spitalfields. Among the retro-chic barbers, cool bars, and fashionista boutiques, are beautiful late-18th century homes. Pre-eminent among them is 18 Folgate Street – a beautiful brown-bricked property with Christmas-red wooden window shutters. The 1742 house is a time capsule. It’s the creation of the late American artist Dennis Severs. He fell in love with this part of London when it was unfashionable, overlooked … and affordable. 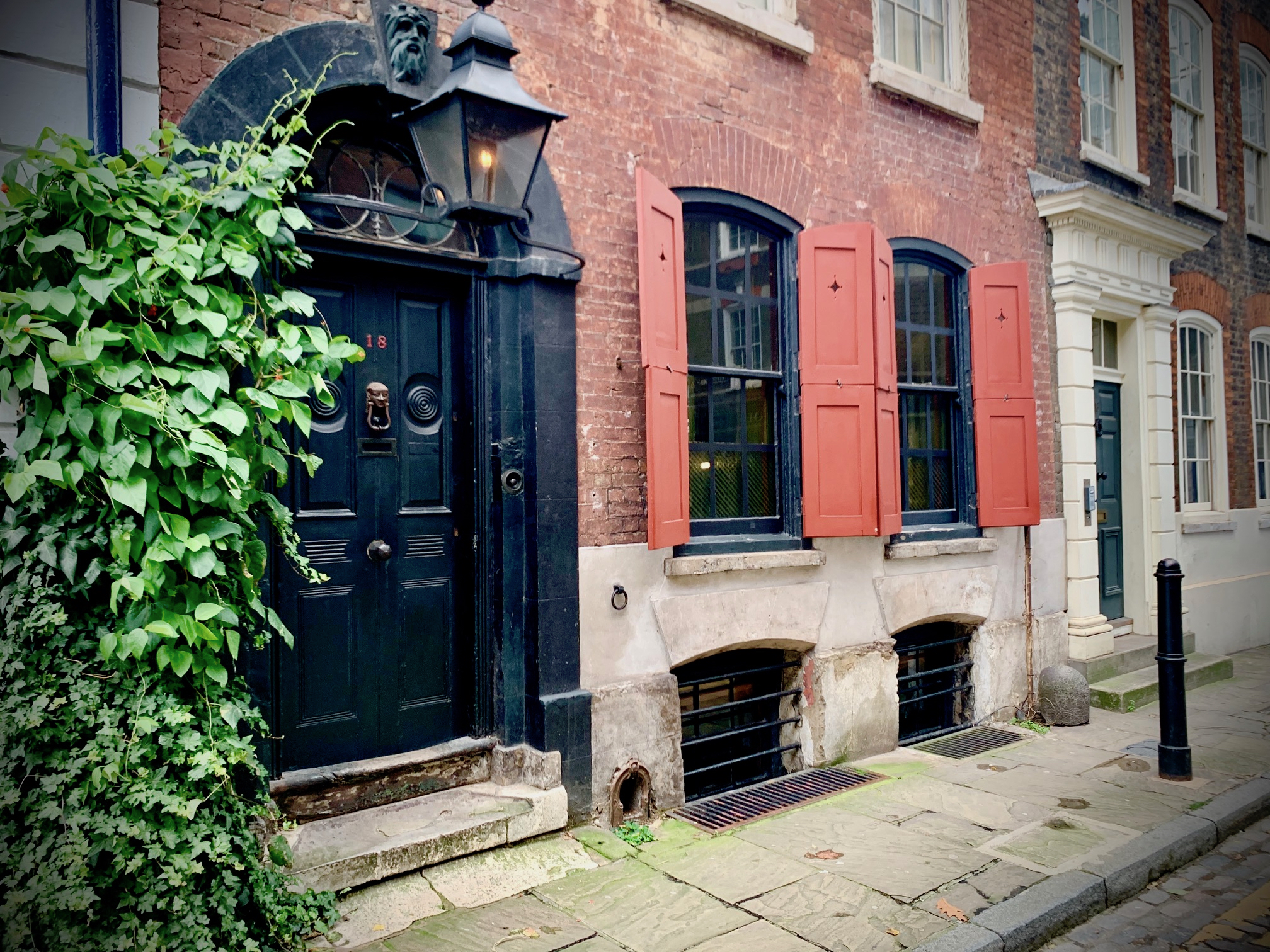 The house is less of a museum and more of an immersive experience. It tells the story through time of the fictional Jervis family. The Jervis’s were Protestant immigrants known as ‘Huguenots’. They, like so many real-life refugees, were expelled from France in 1685, by King Louis XIV.  The house has a motto: Aut Visum Aut Non!: “You either see it or you don’t.” It’s all about experience and the atmosphere at 18 Folgate Street rather than strict historical accuracy. 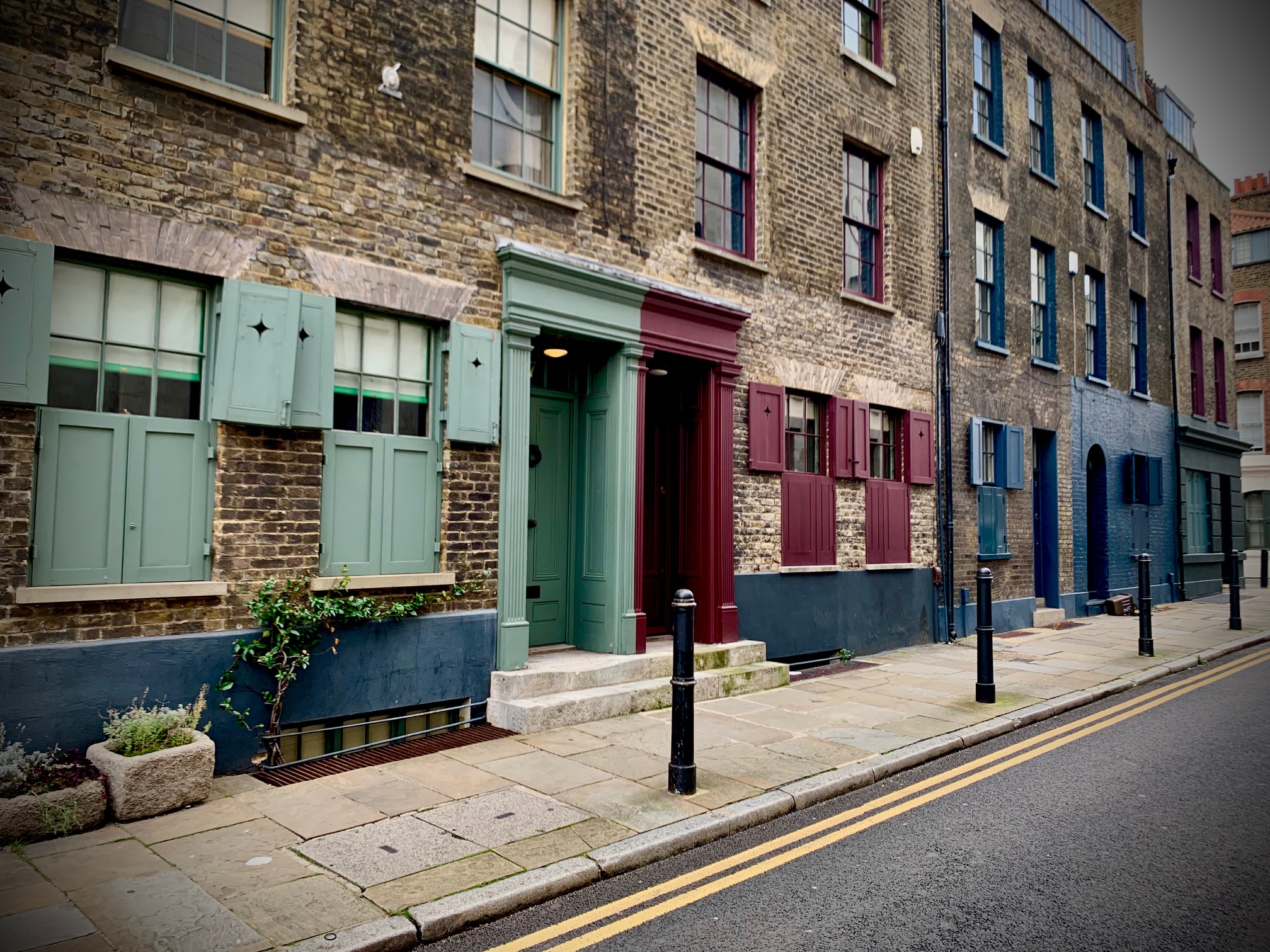 Across the capital, while children rip open presents on Christmas morning, hardy members of Hyde Park’s Swimming Club take the plunge in their 100-yard race in the icy waters of the Serpentine – a tradition dating back to 1864. 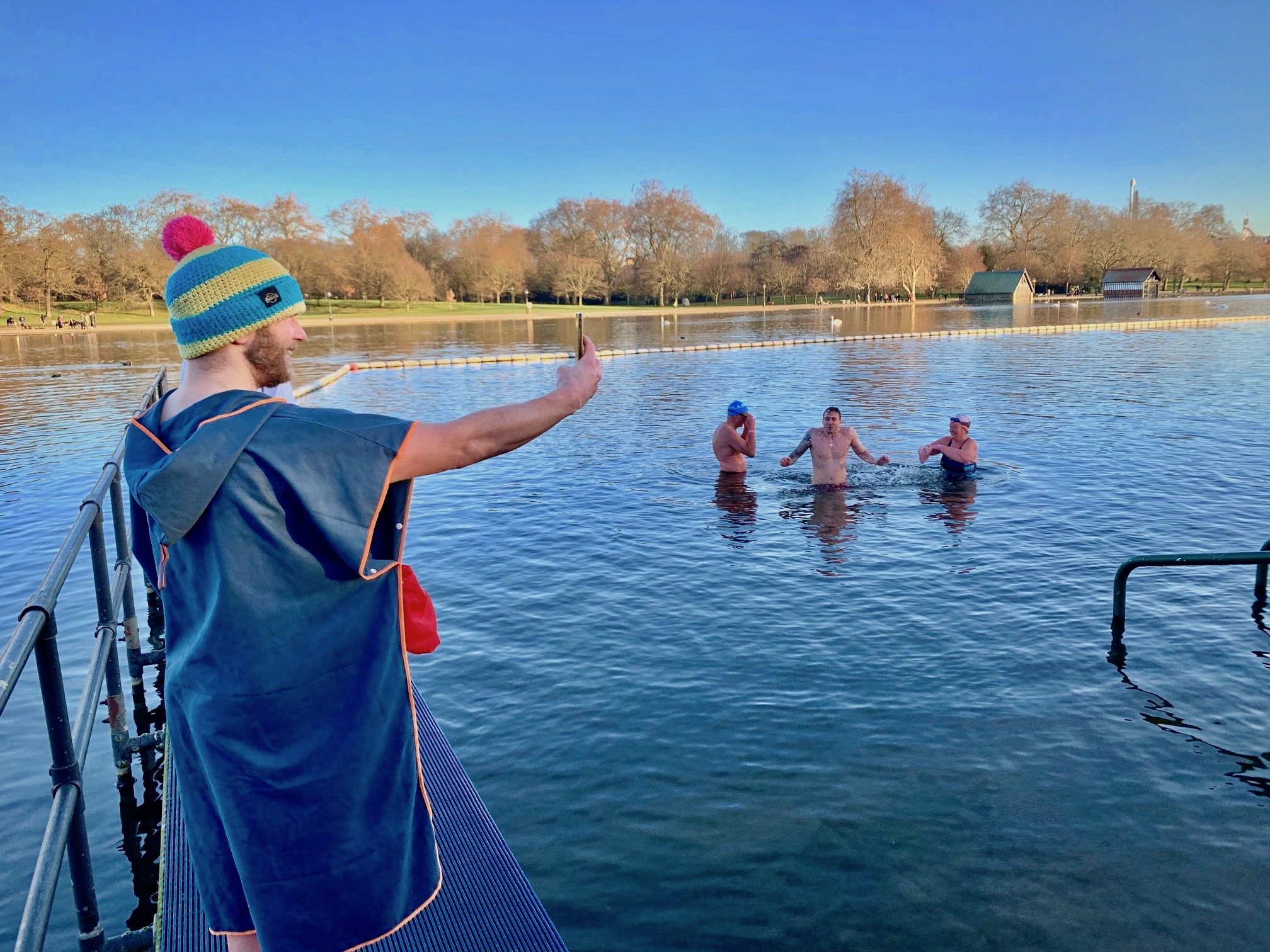 Those swimmers are a tough bunch. No wetsuits are worn here – the only concession to the cold being perhaps a 1950s-style rubber swimming hat. Don’t be tempted to take the plunge yourself. This is strictly a spectator sport for all except club members. Their bodies have been acclimatised to the cold over months of exposure to the water, which remains cool even in the height of summer. Recent medical research suggests that gradual and repeated cold water immersion might actually be good for us.

Participants compete for the Peter Pan Cup, donated by author and local resident J.M. Barrie. Check out the writer’s English heritage glazed ceramic ‘blue plaque’ on the wall of his former home in nearby Bayswater Road. Barrie created the story of Peter Pan – the boy who never grew up.  He gave us children’s characters like Tinkerbell and Captain Hook. Peter Pan’s statue is in nearby Kensington Gardens. 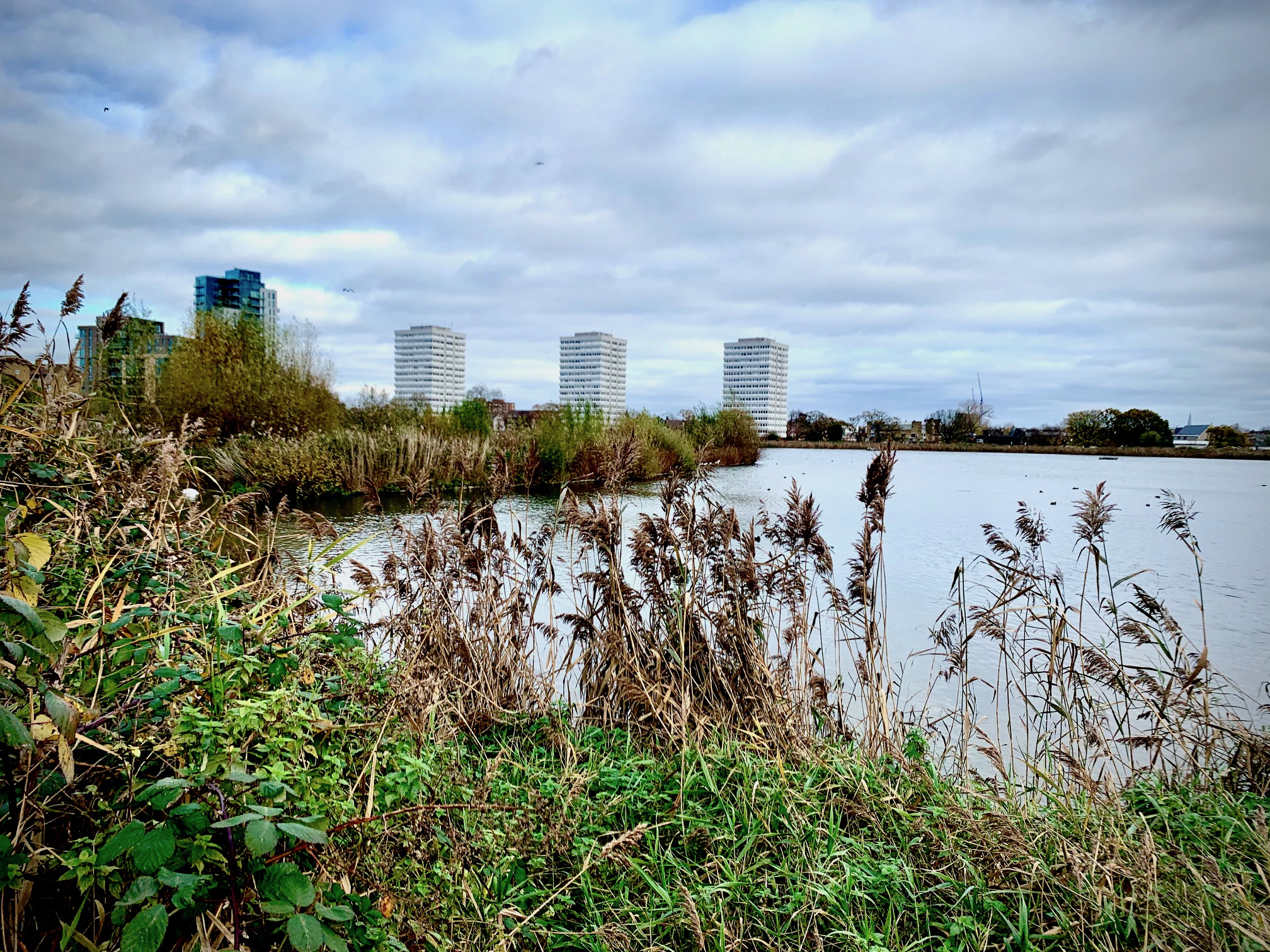 If a Christmas dip in a freezing lake lacks appeal, then there are plenty of bracing walks to be had in London’s eight Royal Parks and the many other green spaces across the capital. Victoria Park is the largest in Tower Hamlets and it’s run by the local authority. It was created in the 19th century to give working class workers an opportunity for exercise and fresh air. Hampstead Heath is a huge wild area in north London with panoramic views of the city. There are great canal and river walks too. Or you could pay a visit to one of London’s protected wild spaces like the Barnes Wetland Centre in south-west London or the Woodberry Nature Reserve in Hackney, in east London. 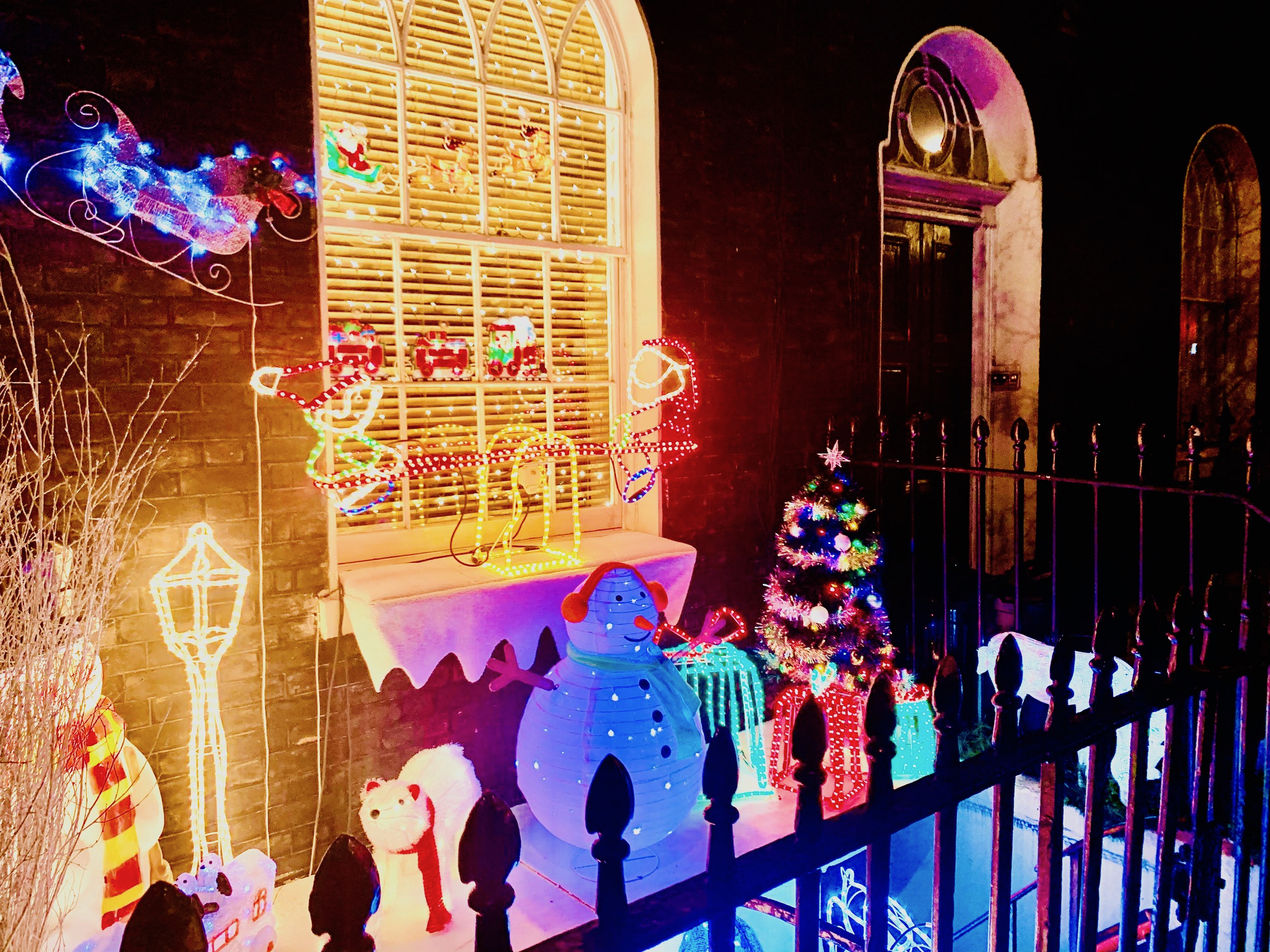 Some Londoners take their Christmas decorations to the next level, Bloomsbury. Image by @Meetmrlondoner

Overlooking the River Thames, opposite James Bond’s office at MI6, is the classical facade of the Tate Britain. The gallery re-opened in early December following lockdown.  And it’s had a makeover thanks to Liverpool-born artist Chila Kumari Singh Burman, who has decked out the building with a pantheon of Indian gods, picked out in LED lights and neon tubes. The Tate Britain – part of a family of four unique galleries – is home to British art from Tudor times to the present day. It also houses the bequest of one of the country’s most celebrated artists, JWM Turner. His work is currently the subject of the gallery’s major exhibition, Turner’s Modern World, which runs until 7 March 2021. 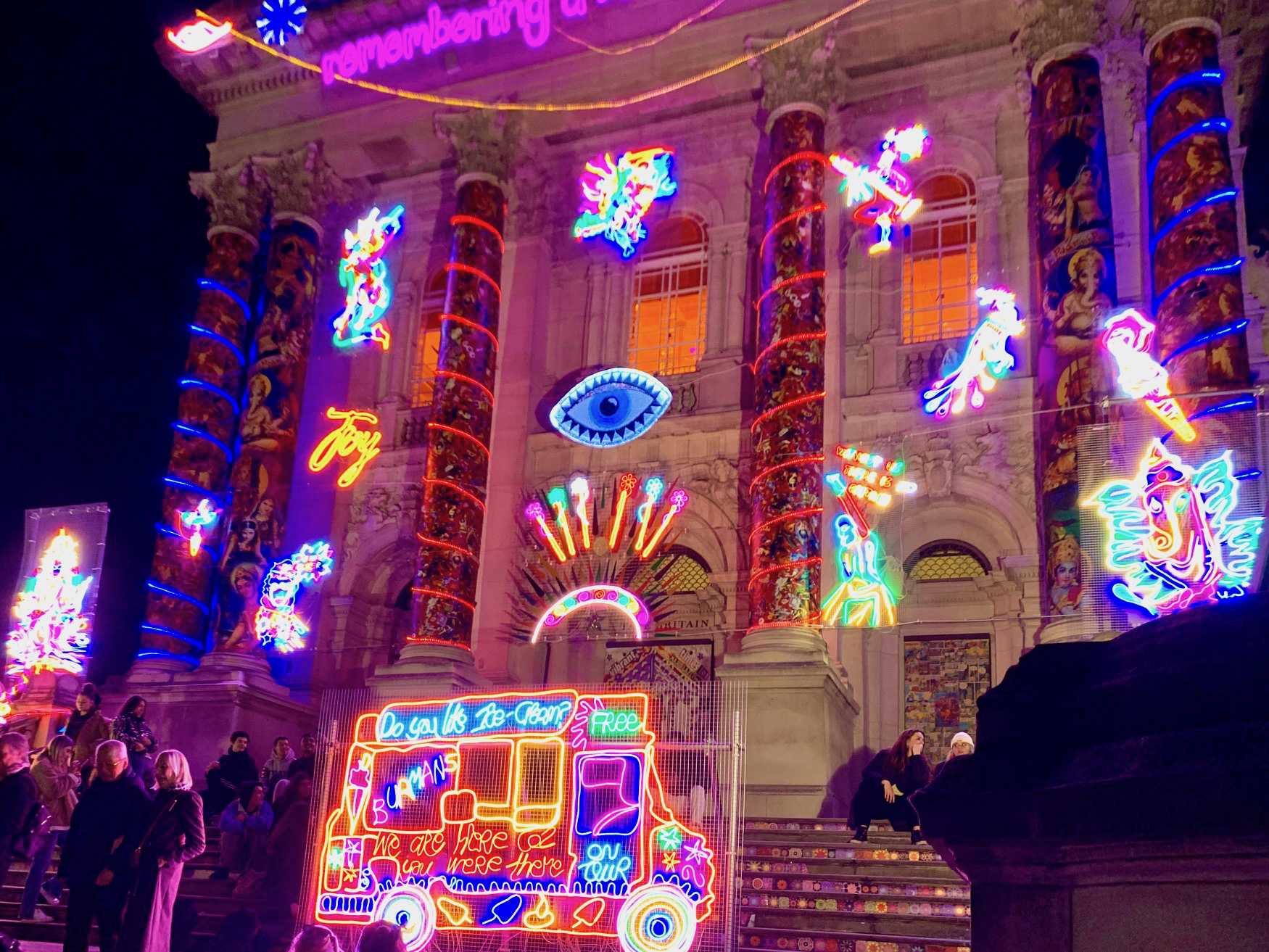 Other notable works at Tate Britain include those by William Blake and a selection of bucolic English landscapes from John Constable. His artistic technique (if not his political and social message) marked a radical and bold new approach to painting.

Socially-distanced shop til’ you drop

If none of that appeals you could do what so many Londoners enjoy best about Christmas – and go shopping.  From the glorious Fortnum’s food hall in Piccadilly; to the childhood wonders of Hamley’s toy shop on Regent Street; via Soho’s tucked-away tailors and jewellers: there’s so much to explore. But don’t forget to wear your mask.