When you disembark at Crystal Palace by London Overground you arrive at a very empty yet oversized station. Once crowds of visitors would have flowed through this station on their way through an underpass called the subway towards the Crystal Palace. A massive greenhouse once stood on top of the hill, so big that a sizable cathedral could have fitted inside the structure. This was the building of the Great Exhibition of 1851. 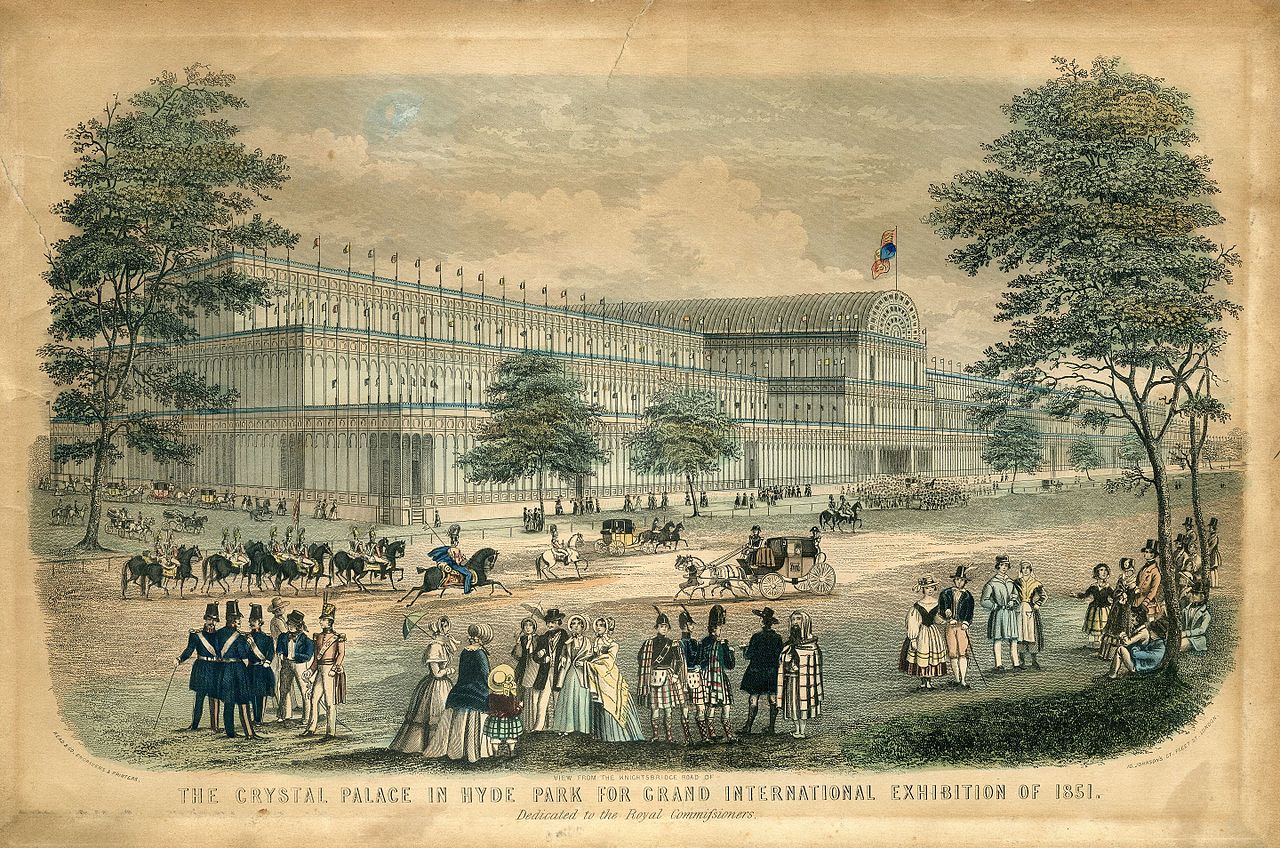 When this enormously successful project finished, it posed a dilemma. What do with such a big structure in Hyde Park? The answer was to disassemble the palace and move it section by section to the Penge area of south east London. It was here that the Crystal Palace as it would come to be known would find a new life as an attraction and exhibition hall. The Palace would now have its own park with a cascade of fountains running down the hill into a collection of boating lakes. The new park inspired a number of projects and arguably the most incredible one was the world’s first Dinosaur Park.

Benjamin Waterhouse Hawkins was not only a scientist and a sculptor – he lived very close to the palace. Hawkins has been the assistant superintendent of the Great Exhibition of 1851, and was appointed by the Crystal Palace company to create 33 life-size concrete models of extinct dinosaurs and prehistoric animals. In this work, which took some three years, he worked closely with Sir Richard Owen, the keeper of Natural History at the British Museum and the driving force behind the establishment in 1881 of what we now know as the Natural History in London. Sir Richard Owen was also a Palaeontologist and the man who coined the name Dinosaur. 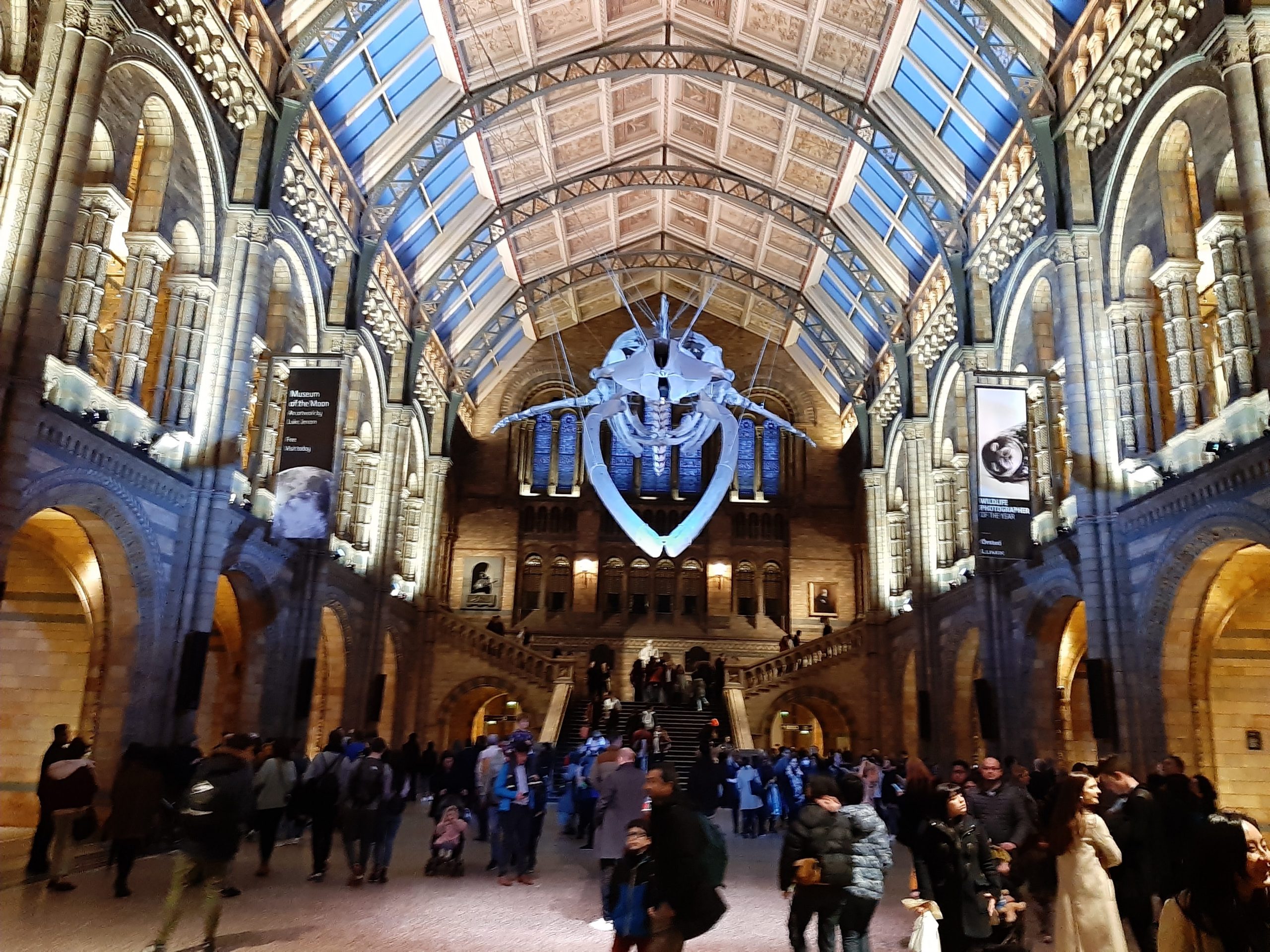 Owen was the driving force behind the establishment, in 1881, of the British Museum (Natural History) in London. Image by Clarissa Donda

Hawkins and Owen worked with the most distinguished scientists of the day to create these models of concrete sculpted over a steel and brick framework. The collection where placed on a series of islands within the lake and painted different colours to reflect the rock strata that the original fossil remains had been found. It would have been a journey through time, starting with Labyrinthodon and Dicynodon on the first island. Painted pink to resemble the Red Sandstones of the Triassic Period 250 million years ago, Labyrinthodon is basically a giant amphibian rather like a salamander that would have inhabited swamps while Dicynodon were the “cows” of the Triassic – although they look reptile-like, they are in fact very distant relatives of mammals. 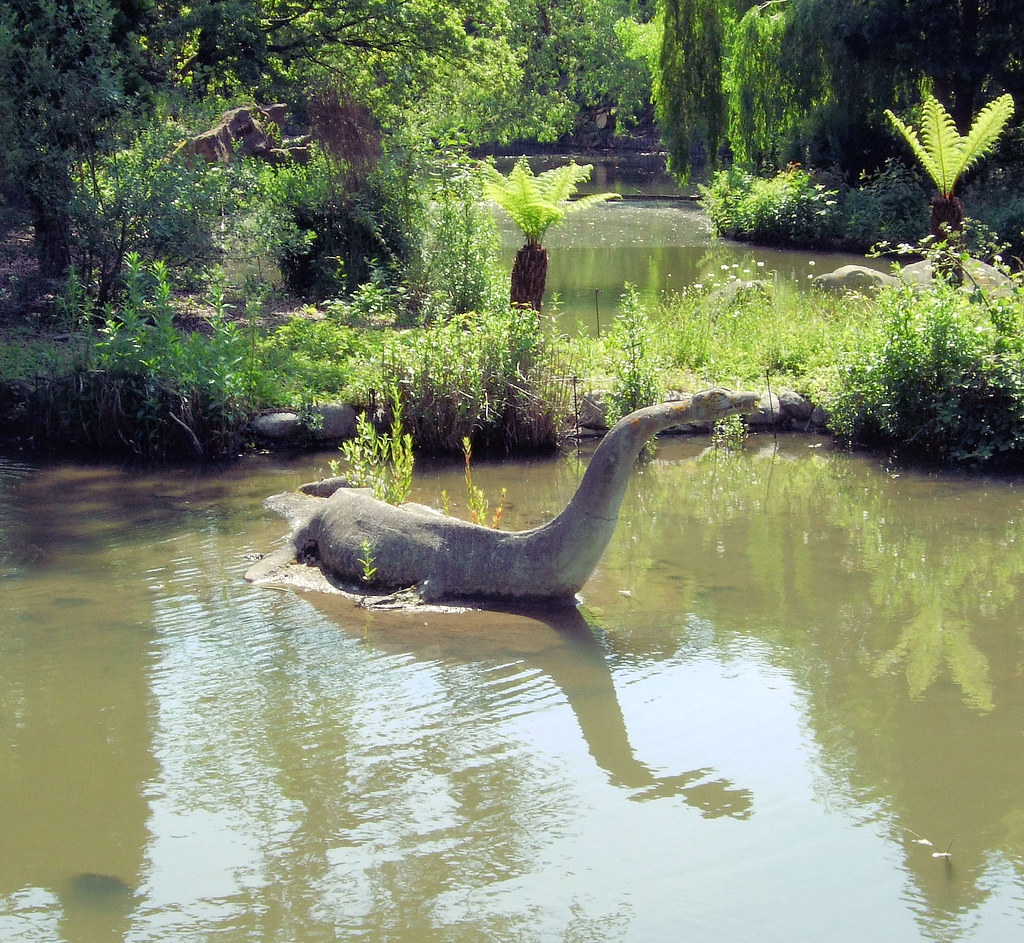 A Plesiosaurus At Crystal Palace. Image by Jim Linwood, licensed under CC BY 2.0

For the second island we revisit the Jurassic world of Mary Anning, featured in a previous article and featured in a recent movie starring Kate Winslet. Painted grey reminiscent of the rocks around Lyme Regis, it is here that the creatures this fossil hunter discovered on what is now the Jurassic World Heritage Coast. Here you will see an Ichthyosaur or fish lizard basking in the sun next to Plesiosaur with its long twisty neck.

As we move towards the third “Dinosaur” island the colour changes to a light green to signify we have left the Jurassic and entered the Cretaceous period about 100 million years ago. Marine reptiles have now been replaced with the crocodile like Teleosaurus and we now see the three giant reptiles that inspired Owen come up with the name Hylaeosaurus, Megalosaurus and Iguanodon. When I take visitors on a tour of the Dinosaurs, I often remark that they look very different to how we think Dinosaurs look today. As a Palaeontologist I am constantly discovering how new fossil discoveries are changing our understanding of ancient life.   For example, here`s a curiosity: a dinner party, hosted by Owen on 31 December 1853, was held inside the mould used to make the Iguanodon. 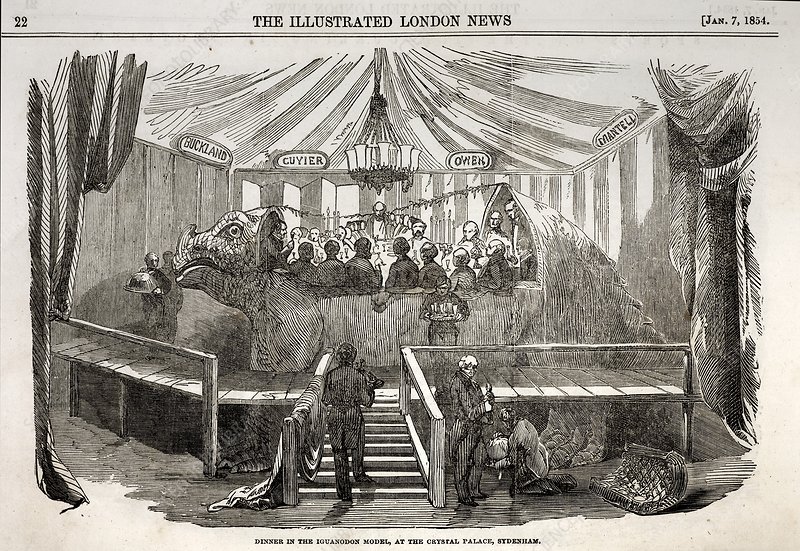 The Fourth Island represents the time following the Dinosaurs, so we see the rise of the mammal’s ancient horse-like animals Anoplotherium appear to be coming out the lake. The final sculpture is the dear Megaloceros: often called the Irish Elk as it was often found in Irish peat bogs, its antlers would have weighed over 40kg. Compared with all the other ancient animals this one only died out 8,000 years ago at the end of the last Ice Age, the only one of the animals that would have been witnessed by humans. However, you will see that the antlers are damaged; despite being Grade I listed these models are at risk. The Friends of the Crystal Palace Dinosaurs hold events and open days to help protect them and they are currently building a bridge to allow visitors once again to set foot on the islands to walk amongst the models.  Their importance cannot be underestimated; they represent the first-time humans tried to bring lost animals from the distant past back to life and although those early scientists made errors, in many instances they are still spot on. 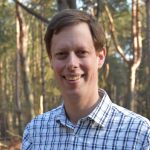 Dr Aaron Hunter is a scientist with the University of Cambridge and a qualified Blue Badge Guide for London. He is a Palaeontologist who gained his PhD from the University of London on the Jurassic rocks and fossils of Bath, the Cotswolds and the Jurassic Coast. He very much likes guiding all ages but especially families and specializes in guiding the Natural History Museum, the British Museum, and the Crystal Palace Dinosaurs. If you want to book him for a tour, contact him here or find him on Instagram.