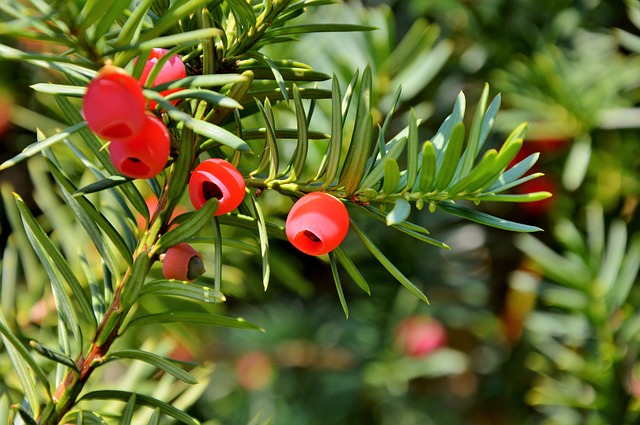 Why are there yew trees in so many British graveyards? They are probably the most common tree found in them and some churches such as Painswick in the Cotswolds are famous for their collections. You might have heard stories that yew trees were planted near churches as a safe source of wood to make English longbows, or that they deterred cattle from disturbing burial grounds, or were echoes of a pagan past. Which is true? The answer is all or none of these. Blue Badge Guide Sean Callery explores. 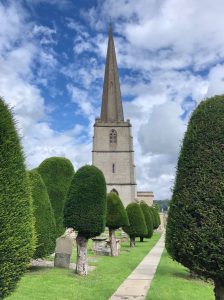 One of Britain’s most remarkable graveyards is Painswick church in the Cotswolds. A mecca for yew lovers, it hosts 99 beautifully shaped evergreen trees.

Pagan yews
The yew tree has been associated with death and the journey of the soul from this life to the next for thousands of years. It was sacred to Hecate, Ancient Greek Goddess of Death, Witchcraft and Necromancy, and was said to purify the dead as they entered the underworld of Hades. Celtic druids also saw yew as sacred and planted it close to their temples to use in death rituals. Being a symbol of death, but very much alive, the yew came to represent eternity and is sometimes linked with the Tree of Life, which features in many religious beliefs and philosophies.

This powerful symbolism led kings and queens to use yew wood in their staffs and other regalia, keen to link themselves to the concepts of longevity and God-given power.

Holy yews
Yews had a sacred role before the rise of Christianity. Many churches were built on the sites of temples and Christian and pagan imagery and beliefs often mixed together. In 601, Pope Gregory suggested that places of pagan worship could simply be converted into Christian churches. There was another reason for Christians to view yews as holy: the heart of the tree is red, while its sap is white. These colours symbolise the blood and body of Christ. As a hardy evergreen tree able to survive on infertile soil, the yew also suggested rebirth and resurrection. 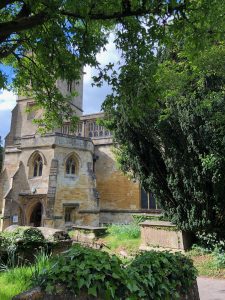 St Mary’s Church in Chipping Norton is surrounded by yews, a typical sight in English graveyards.

Bad news
There may have been practical reasons for planting yews near to dead bodies. Yew seeds, needles and bark carry an alkaloid poison called taxine that could kill cattle that graze on them. According to one study, a dose of 100 grams of chopped leaves could kill an adult. That’s a fine reason to keep cattle out of graveyards, thus helping to preserve the ground and the bodies beneath. Some people even believed that the yews produced these poisons from the vapours escaping from the graves. The toxicity was well known: the witches in Shakespeare’s Macbeth concoct a poisonous brew including ‘slips of yew silvered in the moon’s eclipse’.

Good news
But the poison in yews is not always bad news. The Bathurst Estate in Cirencester is shielded by the largest yew hedge in the world, planted in 1720 and standing 12m (40ft) high and 45m (150ft) wide. It takes two gardeners around two weeks to trim it every August and the cuttings are used to help produce a chemotherapy drug to tackle ovarian, lung and breast cancer because the taxanes stop new, unwanted cells forming. 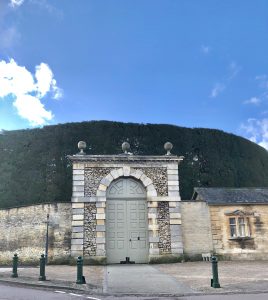 The Bathurst hedge shields a vast estate from view in Cirencester

Fighting yew
Yew trees were vital for English soldiers. The strong but flexible branches were cut into bows taller than a man and were strung with hemp or flax to create powerful weapons with a range of 230 metres capable of launching arrows that could pierce chain mail. They helped English victories at Crecy, Poitiers and Agincourt during The Hundred Years’ War and, at the sea battle of Sluys, finished off many French trapped on their ships. Longbow skills were taken seriously. From 1252 onwards, by law, men had to practise their archery. This happened in an area known as the Butts, a space wide enough to avoid ‘friendly fire’. Many ‘Butts’ street names survive, often near churches. 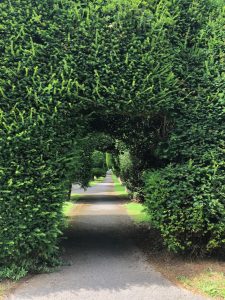 Fake news
But English longbows were not made solely from yews harvested in churchyards. A single tree only provides enough wood for five bows, and the fact that many trees survive in churchyards suggests the opposite. English churchyard yews wouldn’t have provided anywhere near enough wood for armies of English archers. In fact, through medieval and Tudor times we imported forests of the stuff from the
rest of Britain, Ireland, then northern and Baltic states and eastern Europe. When supplies from all these sources ran out during the reign of Elizabeth I, armies switched to less reliable and inaccurate new-fangled firearms.

The new yew
It seems we have yews in churchyards because, well, they never left. They thrive in almost any soil, apart from acid peat, including chalk and limestone so long as the drainage is good. Yews can tolerate harsh weather, strong winds and atmospheric pollution. Churchyards offer excellent light and space and no competition from other trees compared to a woodland. Yews also have excellent survival skills and can live for hundreds of years. They send out shoots for fresh growth, which becomes a new yew, and a branch reaching the ground can embed itself and give birth to a cousin. Or sometimes two trunks fuse together to form a larger tree. Now you have enough information for a lengthy sermon on why yew trees adorn so many churchyard! 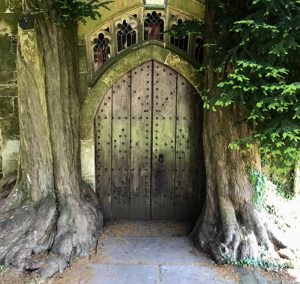 Two yew trees have pretty much grown into the wall on the side doorway to St Edward’s Church in Stow-on-the-Wold. It looks so magical that some people believe it inspired the Doors of Durin in J.R.R. Tolkien’s The Lord of the Rings. The fantasy author travelled widely in the Cotswolds, being born near Birmingham and educated at Oxford. Who knows if he imagined this as the entrance to the underground world of Moria? 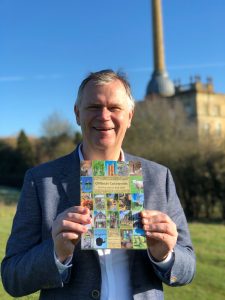 Sean Callery is a Blue Badge guide for the Heart of England and the author of Offbeat Cotswolds.