cult movie on its 40th anniversary

I saw a werewolf with a Chinese menu in his hand

Walking through the streets of Soho in the rain

He was looking for the place called Lee Ho Fooks

For to get a big dish of beef chow mein.

Warren Zevon, Werewolves of London – from the 1978 album Excitable Boy.

London is famous for its ghouls and ghosts. There are the aristocratic spectres of the Tower of London, which may or may not include Anne Boleyn and Lady Arabella Stuart. St James’s Park has the headless Red Lady, who allegedly forced a terrified motorcyclist into a tree in 1970. The adjacent St James’s Palace is home to ‘the horrible spectre’ of Joseph Sellis, valet to the notorious Duke of Cumberland. The unfortunate manservant was found with his throat slit from ear-to-ear in 1871 – his master the alleged culprit.

In 1970, Highgate Cemetery, final resting place of Karl Marx, was reputed to have its very own vampire. And some say that 19th century London was plagued by a fire-breathing spright called Spring-Heeled Jack. This month on 21 August, however, sees the 40th anniversary of the 1981 cult comedy-horror classic, An American Werewolf in London. Its creator was US director John Landis, who had previously given the world Blues Brothers the previous year and Animal House in 1978. 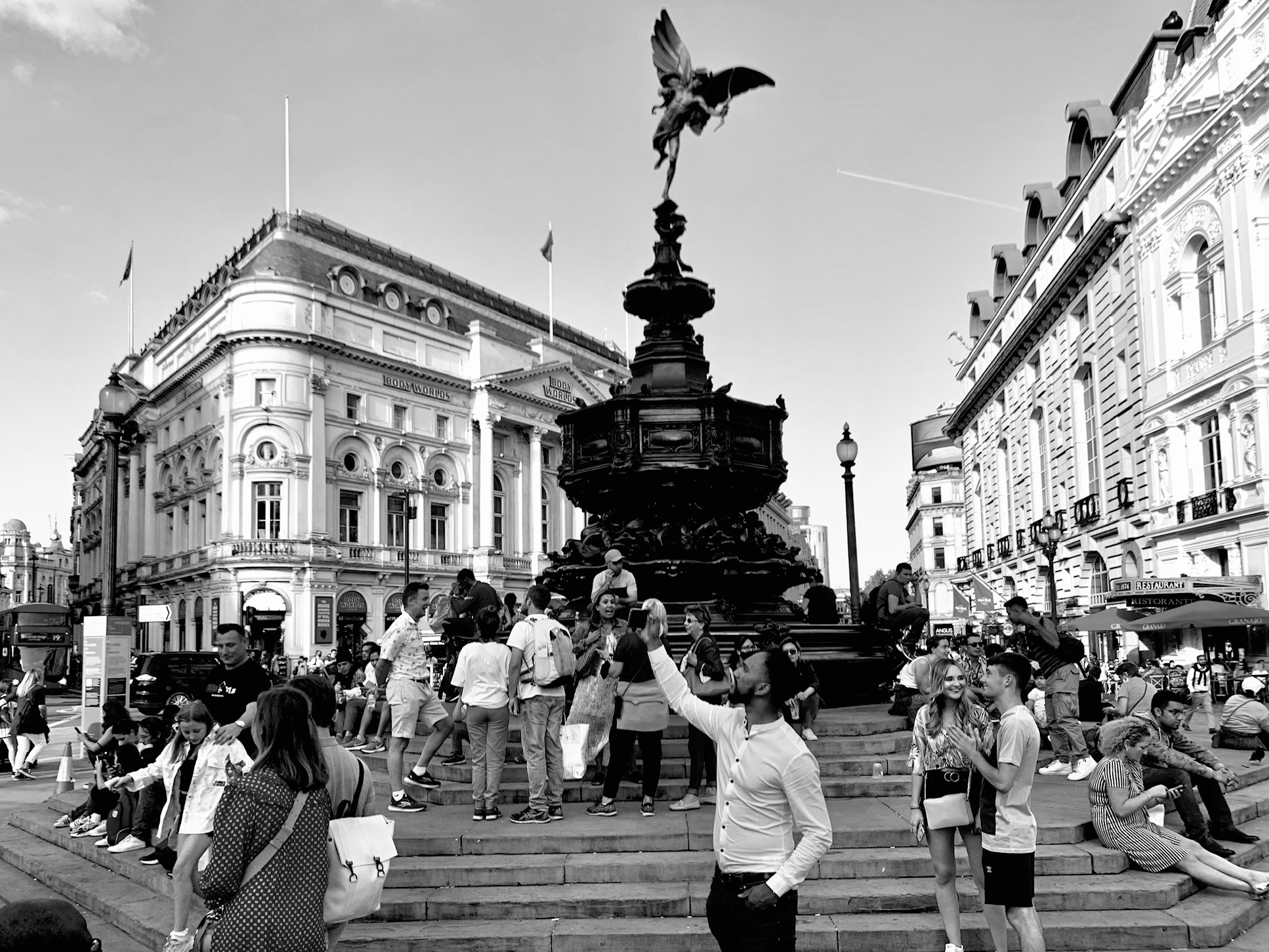 The film’s most dramatic scene was filmed in Piccadilly Circus at night after John Landis went on a charm offensive with the met Police . Image by @Meeetmrlondoner

Both Landis’s previous films also achieved cult status. Animal House parodied frat house excess. Some of its scenes however haven’t aged well. Blues Brothers stands up rather better. It was initially a box-office flop, but became a firm favourite in 1980s student unions. It also showcased many of the greats of American music from Cab Calloway to Aretha Franklin. And its complex and prolonged action scenes and chaotic multi-car pile-ups clearly influenced American Werewolf.

American Werewolf features the misadventures of two young American backpackers, David and Jack, during their European tour. The pair are attacked by a werewolf on the Yorkshire moors. Jack is killed – but forced to roam the earth as one of the ‘undead’ … until the last wolf man dies. David is injured by a wound from the beast’s claw – and thus becomes a werewolf himself. Horror ensues when David’s lycanthropic tendencies dramatically manifest themselves and, plot spoiler, it doesn’t end well.

The film stars American actors David Naughton and Griffin Dunne as the doomed tourists. British national treasure, Jenny Agutter, star of the Railway Children, Walkabout and The Eagle Has Landed, plays hospital nurse Alex. She cares for Jack and he eventually becomes her live-in-lover. If you can’t get enough of Ms Agutter, not to worry, you can still catch her on the BBC in recent episodes of Call the Midwife. 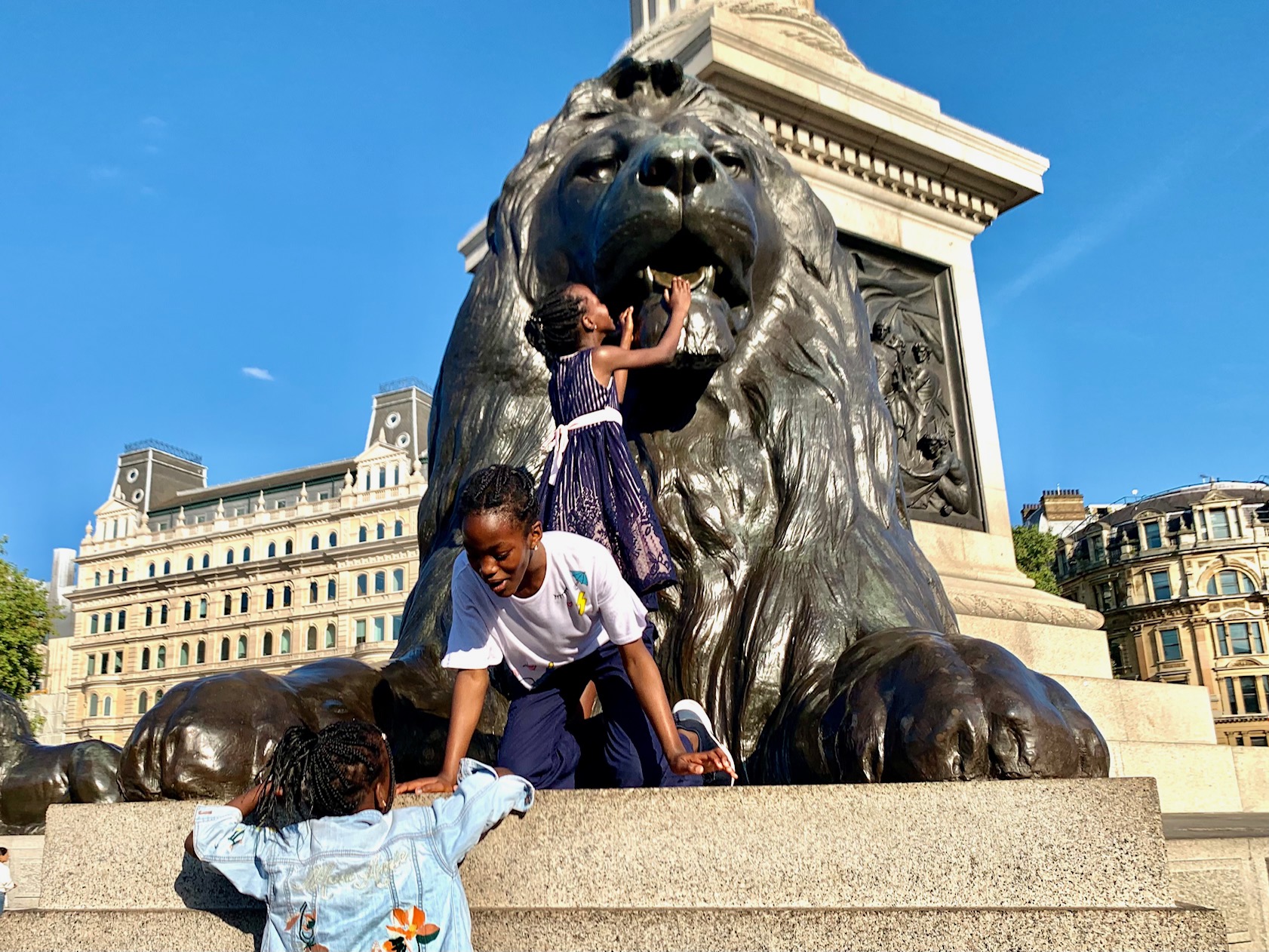 Kids explore Trafalgar Square’s lions. This is where a distraught Jack, on realising he’s a werewolf, tries to get himself arrested. Image by @Meetmrlondoner

John Landis was interviewed by Jason Solomons in The Guardian newspaper on 30 August 2009. “London was horror central, of course, home of Jack the Ripper and Jekyll and Hyde, so I wanted all that Victorian Gothic. But I also wanted to show the real London of 1981.” Landis explained.

And true to his word, American Werewolf gives us some great views of the Capital. There are scenes in Trafalgar Square; Pryor’s Walk, Hampstead; on Putney Bridge and Coleherne Road, in SW10. There’s a lingering shot in Chelsea of George Henry Godwin’s gorgeous 1873 St Luke’s Church in Redcliffe Gardens. During his first nocturnal killing spree, the wolf attacks four tramps camped out by the river at Tower Bridge. The site is now home to City Hall – the HQ of the Greater London Authority and the Mayor of London. 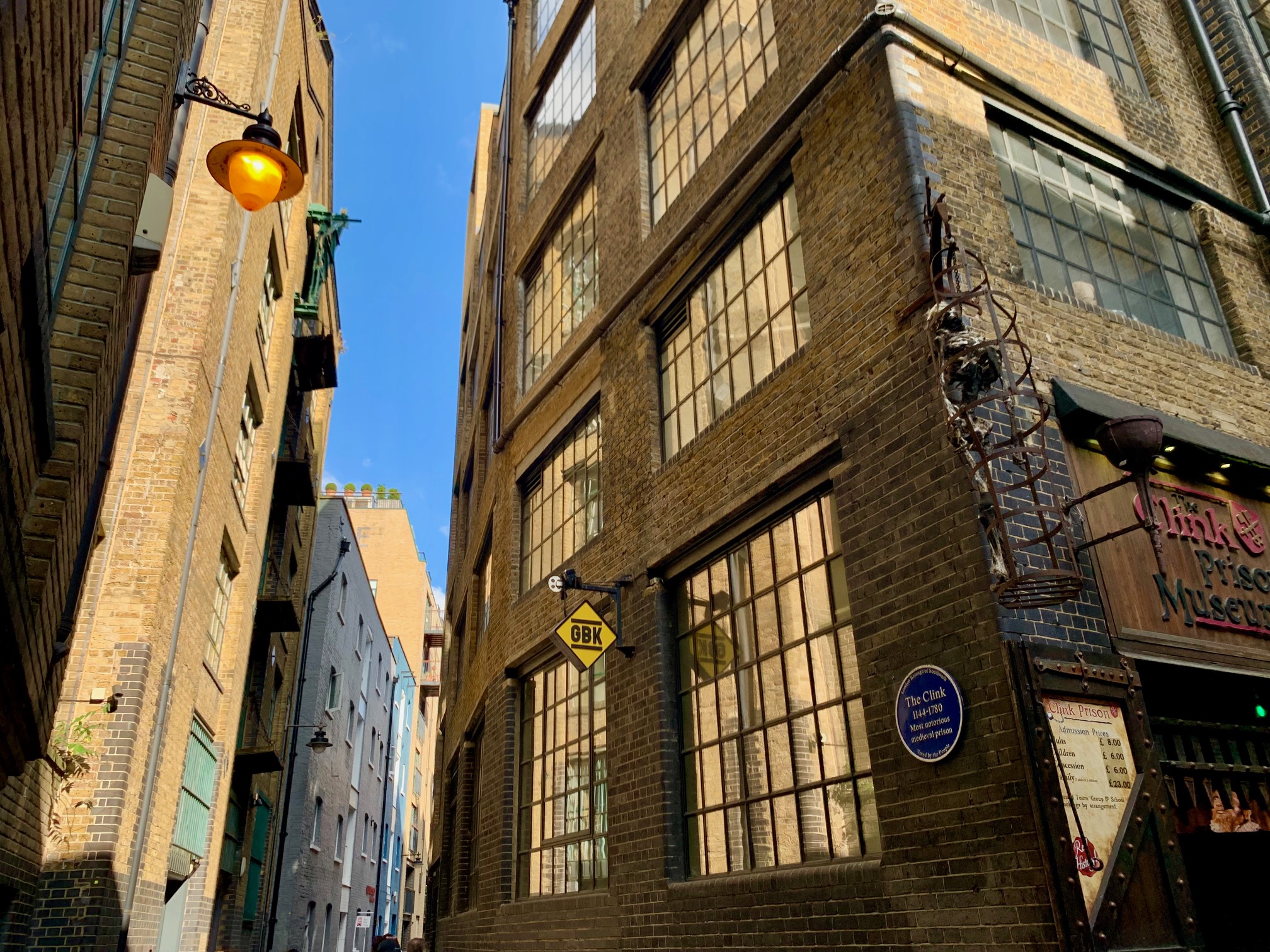 The next morning, we see Jack queuing for a bus on Prince Albert Road, having mysteriously woken up naked in the wolf enclosure at Regent’s Park Zoo. The unfortunate young man has no recollection of the horror he has unleashed on an unsuspecting city on the night of the full moon.

Special effects, for their day, were astounding. The make-up and props team had plenty of gory fun creating the gruesome appearance of both freshly-killed and decomposing corpses. In fact, the gloopy red substance developed for the purpose became known on set, rather amusingly, as ‘Kensington Gore’.* Michael Jackson was so impressed, that two years later, he recruited John Landis to help him create the Thriller video, with its famous zombie dance routine.

In his Guardian interview, Landis reflected that cities were like children. “You turn away for the briefest time and they’ve changed.” And it’s true that many of the scenes feature places now transformed or lost.

The final denouement starts in a pornographic cinema – such institutions are now all but gone in a digital age. The film’s penultimate scene is its most explosive. It’s a huge set-piece in Piccadilly Circus. Arranging the kind of co-operation required with the police and local authorities to achieve this was almost impossible back then.

Landis decided to launch a charm offensive. He arranged a mass screening of Blues Brothers for 300 members of the Met Police at the Empire Leicester Square. The cops loved it and Landis got permission to film in Piccadilly Circus in the dead of night. The director had to organise the shoot with military precision. He was given only two February nights in which to film. He was allowed to stop the traffic only three times and even then for just two minutes each time.

Mr Londoner’s sister, Mary Robbins, chanced upon the filming after a night out with a  friend. She remembers the event well: “Emerging from the cinema after a late screening, we headed for Piccadilly Circus. We were initially alarmed to witness what we thought was a major incident. We were relieved to be told it was a film scene, but at the time, were not given any further details. We saw American Werewolf as it was released. But it was only then that we realised with excitement we had actually been there when that very scene was being filmed. It still remains one of my favourite movies of all time!”

Making movies in London is much easier today with the creation of dedicated bodies like Film London and the recognition by the city that film generates £1.3 billion a year for the economy. This has certainly smoothed the path for James Bond, Ethan Hunt and Jason Bourne to use our great Metropolis as the backdrop to their high-octane action.

The very last moments of American Werewolf are set in a back street off Piccadilly. Not surprising if you can’t quite pinpoint it, because this was actually filmed on the other side of the river in Bankside at Winchester Walk and Clink Street. Then, as now, this ancient neighbourhood is full of history, mystery and intrigue.

* Kensington Gore is a street in the Borough of Kensington and Chelsea.

Featured Image: Time of the wolf. Screenings of American Werewolf at the Prince Charles Theatre will mark the film’s 40th anniversary. Image by @Meetmrlondoner