Mr Londoner teams up with London’s top creatives to re-visit the frost fair of 1814 – when the river froze and Londoners took to the ice.

In the early 19th century the Thames stood still. Caused by a series of mini ice-ages that began in the late 7th century, London’s river and even the sea, froze over. Low solar activity and volcanic eruptions across the planet had changed the climate radically. And the thick ice brought London’s river traffic and the precarious businesses that depended on it to a standstill. 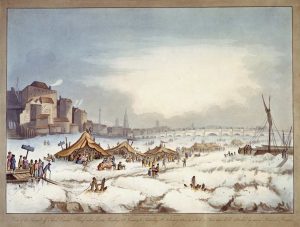 The Frost Fair of 1814, with London Bridge in the background. Image courtesey of Museum of London

But threats create opportunities. With characteristic robustness, London’s entrepreneurial locals embraced this weather phenomenon and created ‘frost fairs’. Appealing to the senses, these icy and chaotic happenings became the epicentre of bawdy entertainment. Everything from food, drink, jugglers, prostitution – and even hunting – were the order of the day. All that people did in the rowdy streets and alleys of Bankside spilled over onto the frozen river.

In 1814 Old Father Thames wasn’t as we know him today. That year’s big freeze lasted weeks because the river was wider and shallower. London Bridge, with its complicated architecture of 19 arches and protruding stone piers, known as starlings, attracted flotsam and jetsam, acting like a dam. This encouraged a rapid and deep freeze. For some this was disastrous. In this period before the railways, the river was London’s artery – so when the ice appeared, business ground to a standstill. Many frozen-in piers and vessels were smashed to matchwood by the shifting ice.

However, 1814 would see the final frost fair. The changing climate, on the eve of the industrial revolution, would herald the rise of global emissions. This, combined with developments in the design of the river’s architecture, meant the Thames would never freeze again. 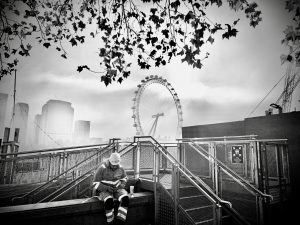 A warming climate means that even on the coldest of days the river will never freeze over again. @Meetmrlondoner

Merchandise
The frost fairs have left their mark on London’s history, with some fascinating items in the collection of the Museum of London. Merchandise today – from food and drink to souvenirs and knick-knacks – are the lifeblood of contemporary cultural events. Today’s festivals, concerts and blockbuster exhibitions all monetize their content through merchandise. In the big freeze of 1683/84, named tickets were printed. One belonging to Charles II has pride of place at the Museum of London. There’s even a slice of 300-year-old ginger bread from the 1814 fair. This fair was recorded in George Davis’s ‘Frostiana – or a History of the River Thames in a Frozen State.’ The tome was written, and printed, on the ice. To this day it’s the only publication ever created on the Thames.

Freeze frame – the art of the frost fair
Better Bankside is the business improvement district (BID) serving this quirky corner of Southwark that includes Tate Modern, Shakespeare’s Globe and Borough Market. The BID acts as a link between the people and the businesses of Bankside and Southwark, the local authority. It nurtures green spaces, promotes walking and cycling and helps to make this part of Southwark an attractive place to live, work, eat and shop – and mores besides. Although a cultural hub today, this part of town was made famous in medieval times for its lax laws, taverns, inns, theatres and brothels. And Better Bankside is keen to celebrate the neighbourhood’s chaotic history by preserving a bit of the grit in the oyster. Bankside has always prided itself on its free-thinking and being a bit different. 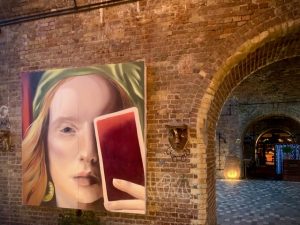 This winter, the team at Better Bankside has linked up with London film-makers, video artists and digital creatives to devise site-specific installations across the locale. There are cutting-edge works by renowned street artists including Timba Smits, Mr Cenz, and Peachzz. Each artist interprets the frost fair story, which they then bring bang-up-to date with a focus on contemporary issues, including gender, identity and the environment. Graffio Arts has created a brilliant free app, which encourages us to interact with the works a little further by bringing images to life using film and music, which makes for an immersive experience. 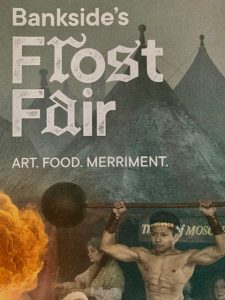 London street artist Dreph (Neequaye Dreph Dsane, a lecturer at Portsmouth University) has created a huge image on the exterior wall of the recently-opened Africa Centre. Here, in all his glory, we see Ignatious Sancho (1729-1780). Ignatious, who was born a slave, became an abolitionist and a radical social reformer – and a resident of Greenwich. He was the first black property owner in England and therefore the first black person to have the vote. Dreph’s artwork depicts him at the 1814 frost fair in the style of a high-society portrait by Thomas Gainsborough. The huge mural shows an elegant Ignatious on the ice, sporting a fine red topcoat, with London Bridge and the frost fair revellers in the background. It’s quite the spectacle.

Join Mr Londoner to explore all the fun of the frost fair. Tours are free but booking is essential. Mr Londoner is former museum director Antony Robbins @Meetmrlondoner

Antony Robbins, AKA Mr Londoner, is a writer, broadcaster and former director of the Museum of London. He combines the contemporary with the past and runs a series of bespoke webinars and tours on a variety of  subjects that range from fashion to architecture, from climate change, art/street art and London at war to how the city will emerge post-pandemic. Check out his profile here and follow him on Twitter and Instagram