This weekend sees the third Tour de Yorkshire, a celebration not just of cycling, but of the scenery, people and places that make Yorkshire such a fabulous destination to visit. Here Yorkshire Blue Badge Guide Michele Thompson tells us all about the event and the route that this years competitors will take.

In 2014 Yorkshire was the setting for the “grandest of all Grand Departs” when the first stage of that year’s Tour de France raced through the county. Watched by over 5 million spectators along the route and with millions more watching on TV worldwide, it put Yorkshire firmly on the map as a cycling destination.

The third Tour de Yorkshire Annual Legacy Race this year builds on that monumental success. Between Friday 28th – Sunday 30th April the roads and towns of Yorkshire will again be filled with cyclists, the Yorkshire flag will be flying proudly and the crowds will be packing the route. 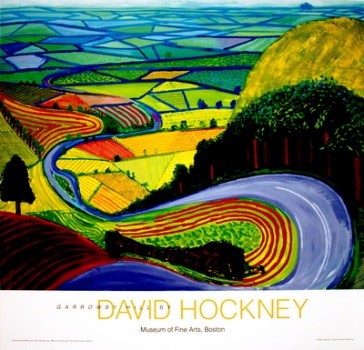 The first stage is known as the “The Coast and the Wolds” and begins in Bridlington Spa before heading inland through Pocklington and Driffield. Cyclists will tackle the iconic Garrowby Hill (made famous by Bradford born artist David Hockey in his 1998 landscape) before the route heads back towards the coast to pass through Whitby and Robin Hood’s Bay to finish in Scarborough.

Stage 2 takes in Yorkshire’s “Historic Market Towns”. Starting in Tadcaster, with cyclists travelling across the new bridge, completed this year after the December 2015 floods washed away the previous Grade II listed bridge, this stage ends in Parliament Square, Harrogate, a route that passes the impressive UNESCO World Heritage site of Fountains Abbey.

The third stage known as the “Yorkshire Terrier” and starts in Bradford, (which is the world’s first UNESCO City of Film and home to the National Science and Media Musuem). The route passes another UNESCO World Heritage site at Saltaire, the mills and purpose-built village that were created by the 19th century manufacturer and philanthropist , Titus Salt. This 194.5km stage also includes the toughest of the climbs of the three days – Shibden Wall described as a “beast” – as well as passing Skipton Castle and Holmfirth, and to finish the riders embark on a torturous 22km finishing circuit that features no less than four categorised climbs at Deepcar, Wigtwizzle, Ewden Height and Midhopestones before ending at Fox Valley Sheffield.

The event reaffirms Yorkshire’s place as a world class cycling destination and will further boost the local economy, build communities and celebrate all that makes Yorkshire great from the people to the scenery. Watch the riders go by this year along a stretch of the route and let one of Yorkshire’s Best Guides reveal the hidden secrets of the towns and scenery along the way.