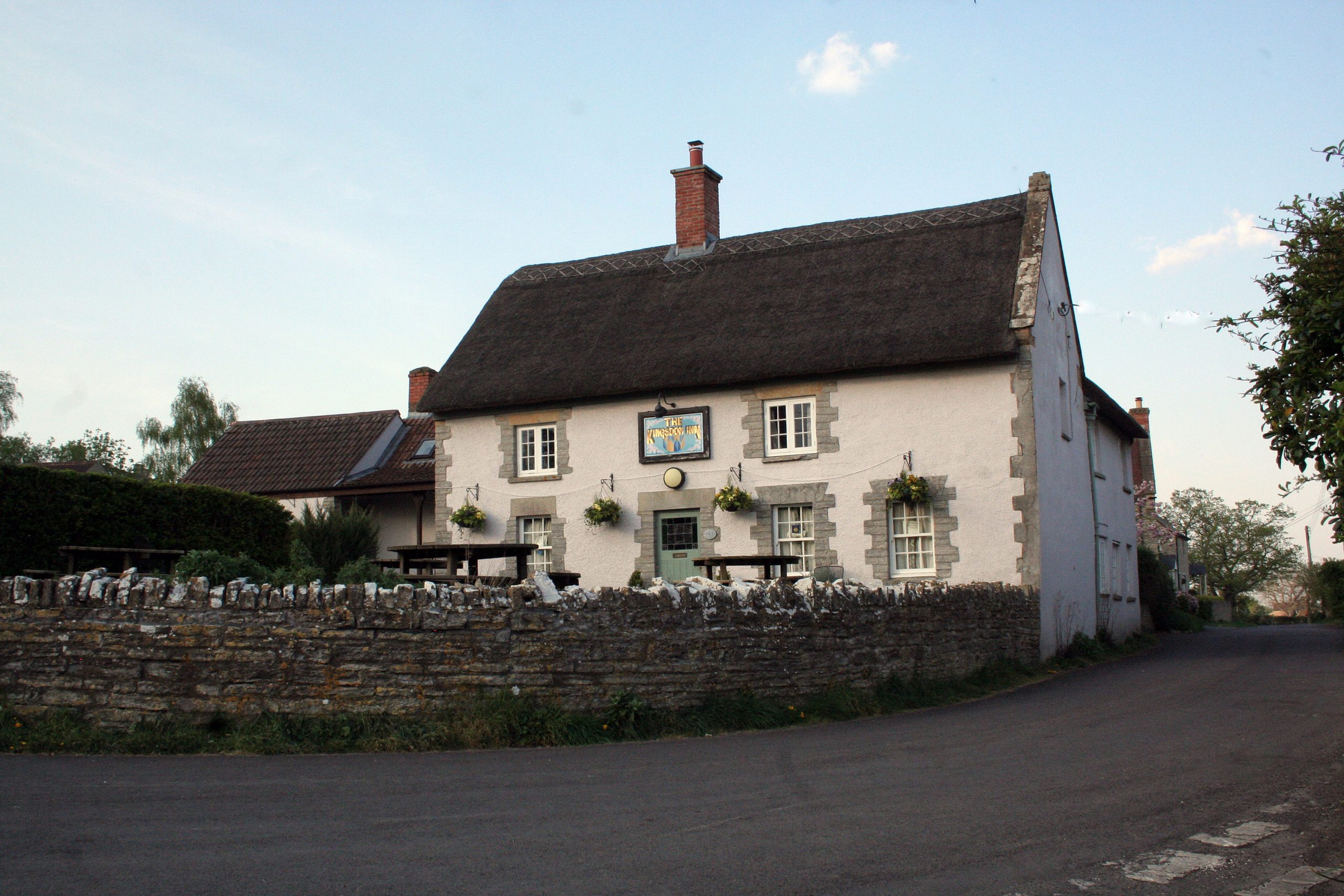 It feels as if we live in extraordinary times but pandemics and plagues were once commonplace, carving a deadly swathe through the population and influencing the course of history for those who remained.

At school we probably learned about the pandemics most devastating to Europe’s population; the Black Death (1347/8), the Great Plague (1665) and Spanish Influenza (1918) but for most of our past infectious diseases came and went annually. Sometimes they were indiscriminately destructive; other times they took the weak, the old and the young. Regardless they were an ever-present threat respecting neither status or situation.

The Coronavirus emergency has reminded me of a remarkable find made in the Somerset village where I live that gives a glimpse of the effects of a London plague on the lives of a local couple; Francis Crich and Mary Hurde. In the 1990s some fragments of ancient paper were found tucked behind the skirting board in an old farmhouse. To the builder who found them they appeared to be written in a foreign language and might well have been discarded. However, they proved to be a remarkable survival from 1592, late in Elizabeth l’s reign, and have come to be known as the Kingsdon Plague letters. 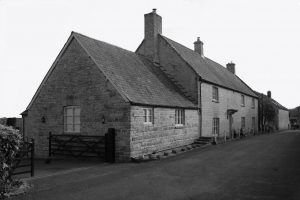 The Farmhouse in Kingsdon where the Plague Letters were found and Mary Hurde lived. (Kind permission of the owner).

To set the letters in their 16th Century context this was just four years after the defeat of the Spanish Armada when the foundations of London’s future as a global trading capital were being laid and the New World was being opened up by the great Devon explorers: Raleigh, Drake, Grenville and Gilbert. The greatest threats to England at the time were invasion from Catholic Europe (the Armada was not the last invasion to be planned by England’s enemies) the uncertainty of who would succeed the ageing Queen and the ravages of disease and poor harvests. 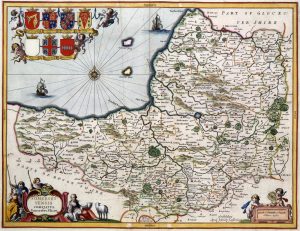 A map of Somerset drawn in 1646 based on John speed’s map of c.1611. Kingsdon is between Ilchester and Somerton in the south-east of the county, just a mile from the junction of the road to London and the Fosse way. (Wikimedia Commons Public Domain)

Two fragments of paper were found. The first is a London Plague Bill for the week of September 14-21 with a note on the back to a man called Crich from his friend William Rixton writing from London during one of the worst outbreaks of plague in the 16th Century. Rixton’s note gives additional details about the week’s deaths that have enabled historians to date the bill to 1592.

Prior to the major plague of 1603 when the bills began to be printed, there are only three other original London Plague Bills known to exist making this one of the most important disease records before the Great Plague of 1665. I would have liked to include a photograph of the letters with this blog but with Somerset Archives on lockdown, their workers safely distancing at home through 2020’s pandemic this is impossible for now. The photograph below shows a Mortality Bill, held by the Welcome Foundation, from the Great Plague of 1665; an equivalent of the 1592 Bill for this later outbreak. The number of deaths due to plague is awe inspiring but some of the other causes of mortality also give pause for thought. 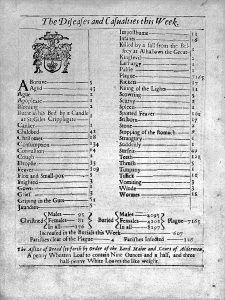 London Plague Bills were a list of deaths for the City of London recorded each week at the Parish Clerk’s Hall on Thames Street and collated annually. The names of the 109 parishes of the 26 wards of the City (statistics for a wider area were included after 1603) are wonderfully evocative of the City’s medieval layout. St Botolph, Aldersgate; St Giles Cripplegate and St James Garlickhithe were amongst the 35 ‘infeckted’ parishes that week in September 1592. In his note Rixton to Crich totals up the deaths on the Bill stating that of the 377 deaths on the Bill, 183 were due to plague and commenting:

‘The (law) term is proclaimed to begin the 27th of October. We have small doings by reason of the sickness. Yet I thank God it is no nearer unto us than the alleys as yet: there died two children more out of the other alleys this week.’

It would seem that Somerset boys William Rixton and Francis Crich (aged 23 in 1592) had gone the 140 miles to London to seek their fortunes training for a legal career; perhaps at the Inns of Chancery. Deaths from bubonic plague often peaked in the late summer before the cold of winter slowed the rat and flea populations. This meant it was not uncommon for the start of the Michaelmas term of the legal year (usually the beginning of October) to be postponed. In 2020 we can see modern parallels with schools closed, cancelled examinations and new jury cases and court hearings postponed.

The ‘doings’ Rixton refers to were probably public entertainments. The worst affected were playhouses such as The Rose Inn on Bankside or The George Inn, Southwark. Plague could sweep through an audience gathered to see Shakespeare’s latest play (probably Richard III in 1592) just as it did through skiers socialising in Italian mountainside bars in 2020. We know the city authorities kept theatres closed until the 29 December in,1592, using social distancing as one defence against the disease, albeit without a full understanding of how the contagion was passed and with no resort to online alternatives to keep the actors in employment.

Francis Crich was a bad correspondent. William Rixton admonishes him for not replying to his three previous letters which had also contained Plague Bills. It would seem Crich planned to return to London when the threat subsided but the second fragment of paper is a clue to what kept him in Kingsdon and gave him an alternative to a career in the London courts. The fragment is part of a letter from the same William Rixton to Goodwyve (Mary) Hurde. She was the educated widow of a well-to-do Kingsdon farmer, John Hurde (died 1588) and mother of his 5 children. We know she owned land in her own right, was literate and was even familiar with written Latin. Rixton tells her of the cost of the expensive cloth she had asked him to send her from London. The ‘fine black’ material and the bugle lace with its decorative glass beads, cost £3 7shillings; equivalent to several hundred pounds today. It was probably purchased for her second wedding. Her new husband, 10 years her junior, was Francis Crich, with whom it would appear, she fell in love when he returned from London to escape the plague. Maybe this accounts for his failure to write back to his friends? Whilst physically distancing himself from the plague in London he had been able to make new and beneficial social allegiances at home; the first of their six children was conceived in December 1592 and they were married in April 1593. 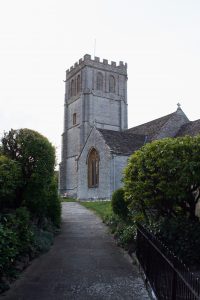 The parish register lists her marriage and the baptisms of her 11 children by her two husbands and we know that Francis Crich redeemed himself locally by becoming churchwarden. Mary died in 1626 and Francis Crich inherited for life the land she owned herself whilst the Hurde family land, including a windmill, went to her son by her first husband. By an interesting quirk of fate the tombstone she shared with her first husband (rather than Crich) survived the ‘improvements’ of the Neal family who owned Kingsdon in Victorian times. They repaved the church but moved her stone to the vestry. It is the earliest at Kingsdon by more than a hundred years.

The Kingsdon Plague letters give a small but revealing insight into how plague affected lives in the past but with some thought provoking parallels with our situation today; life is very different but yet so similar in so many ways. I wonder how many equivalent and equally intriguing stories may emerge when the current pandemic is over. We shall resort to our excellent local pub to find out.

The Kingsdon Plague letters were first investigated by Herbert Berry in his booklet ‘A London Plague Bill for 1592, Crich and Goodwyve Hurde’ Coram Press 1993. The information for this blog was researched form this pamphlet and the memories of local residents. The letters themselves are held by the Somerset Heritage Archive at Taunton.