As a Blue Badge Tourist Guide, I have the pleasure of visiting some of the most beautiful homes and gardens in the country, from the modest homes of the middle classes to the palaces and castles of the monarchy. I also happen to love architecture, interiors and gardens! So I thought I would draw together my favourites and tell you why they are so special and so beautiful. Even if you live in a small flat, like me, you can appreciate their style and, hopefully, get ideas for a bit of remodelling and DIY!

The ideal house – The Queen’s House Greenwich
The Queen’s House in Greenwich has been called “a house of delights”, and that describes it perfectly. Partly it is the setting, as it sits between the hill of Greenwich Park (with the Royal Observatory on top) and Christopher Wren’s Old Royal Naval College (ORNC) next to the river. Indeed, the ORNC was specifically designed so as to not block the view of the river Thames from the Queen’s House and if you stand by the river today it seems to frame the view of the Queen’s House beyond. It was commissioned in 1616 by Anne of Denmark (wife of King James I) as a garden retreat from the, sadly no longer standing, royal palace at Greenwich. It was finished for her successor Queen Henrietta Maria (wife of Charles I) in 1638. For more than 100 years it passed from Queen to Queen, hence its name.

From the outside
The view as you approach the Queen’s House is one of symmetry and harmony. It was built 1616-38 and was an architectural trailblazer. It was built in the Palladian style, introduced to Britain by the architect Inigo Jones, and was the first classical building in the country since Roman times. Its design reflects the Renaissance ideals of mathematical, classical proportion and harmony. 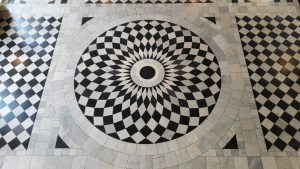 The Queen’s House floor in Greenwich

From the inside
The architecture on the inside is even more impressive! The Great Hall stands at the heart of the house and forms a perfect 40 x 40 ft cube. It would originally have housed the classical statues from Charles I’s art collection and had an extravagantly painted ceiling, later criminally removed by Queen Anne. But the original geometrically patterned black and white marble floor laid in 1636 survives and can be appreciated from the first-floor balconies that run around all four sides. 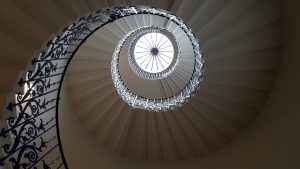 Running between the floors is the famous tulip staircase, the first geometric self-supporting spiral stairs in Britain. There is no central support, instead, it is supported by a combination of cantilevering from the walls and each step-block resting in place on the one below. The result is that you can stand at the bottom and look all the way up the spiral staircase to the top. The wonderful blue balustrade is in a floral pattern, sometimes said to be the fleur-de-lis symbol of the French Queen Henrietta Maria, but more often said to be tulips. It was built at the time of tulip fever when people bankrupted themselves for rare tulip bulbs, so this makes a better story!

Today the Queen’s House forms part of the National Maritime Museum and has a wonderful collection of paintings linked to the Tudor and Stuart royal families and connected to the navy. 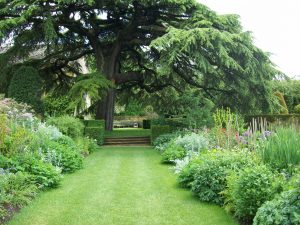 The ideal garden – Hidcote, Gloucestershire
There are a few quintessentially English gardening styles. The most famous is probably the 18th-century parkland, with huge rolling vistas, serpentine lakes, fake “natural” planting (for example a perfectly placed beech wood or glade) and focal points such as columns or follies (for example mini classical temples). Masters of the art such as Lancelot Capability Brown redesigned the grounds of many of our great stately homes to create a version of a pastoral idyll. These are stunning to walk around, but useless as inspiration unless you have several hundred acres and a team of gardeners and labourers to redirect rivers and dig out water features. Much more accessible to the amateur gardener are 20th-century gardens, inspired by famous gardeners like Gertrude Jekyll and Vita Sackville-West who developed the traditional cottage garden and invented garden design based on colour schemes and “garden rooms”.

One such romantic garden was created by an American in the sleepy Cotswolds! In 1907 Lawrence Johnston and his mother purchased Hidcote Manor in Gloucestershire and Lawrence set out to create a perfect garden. 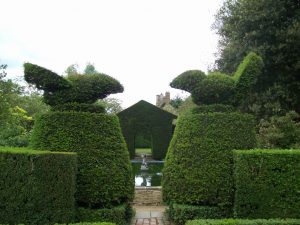 The garden rooms
Hidcote is an Arts and Crafts style garden, made up of a series of intimate garden rooms, lined up with and celebrating the vistas beyond. Every garden room is overflowing with deep planted, themed borders, with flowers spilling over paths, arches and hedges and the glorious scent of roses, honeysuckle and the famous Hidcote lavender. Rooms to enjoy include; 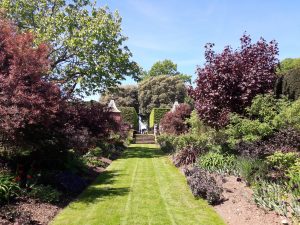 Vista through the Red Borders and Stilt Garden at Hidcote

The views
Find the gazebos and stand at the crossroads of the garden. Look one way down the Long Walk; a gentle smooth slope of lawn edged with straight hedges and overlooked by trees, dipping down then up again, to end at a gate framing the countryside and Cotswold sheep beyond. Alternatively, stand in the Old Garden and look through the Circle Garden, through the Red Borders, past the two gazebos, through the Stilt Garden to a perfectly framed gate, with the rolling hills of the Cotswolds beyond. Whichever way you look, the garden seems to be made for this spot!

Today Hidcote is owned and managed by the National Trust charity and is open to visitors all year round, it deserves a visit in every season!

The interiors – The Royal Yacht Britannia, Leith Harbour, Edinburgh
There are numerous sumptuous interiors in some of our great royal palaces and stately homes, dripping in gold leaf and crystal chandeliers, with baroque painted ceilings and walls, or with wonderful medieval wood panelling and tapestries. But I can’t really imagine living there (even in a daydream where I am creating my ideal house and garden). Such grandeur is simply too formal and too intimidating! However, some of the homes of famous people that have been preserved for the nation are remarkably homely and approachable. You find yourself wandering around, getting a real insight into the personality of the person who lived there and imagining yourself curled up in an armchair. A very good example of this is Chartwell, Winston Churchill’s country house in Kent, which is owned and managed by the National Trust charity. It was his family home from 1922 and is full of family photos, books and comfortable chintz-covered sofas. 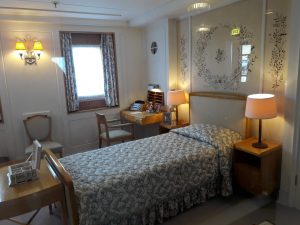 However, the interiors I have chosen are from a boat! The Royal Yacht Britannia was launched right at the beginning of the Queen’s reign in 1953, as a floating palace from which she could entertain foreign dignitaries on her world tours, but also as a home away from home for the royal family who would go on regular summer holidays cruising around the Western Isles of Scotland. Some rooms, such as the dining room, were understandably grand as they were designed to host state banquets. 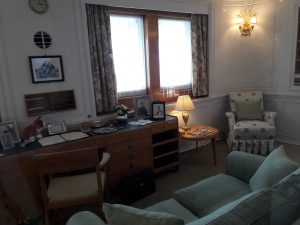 Others are incredibly homely and informal. Britannia was decorated to the Queen and Duke of Edinburgh’s personal tastes and it has an understated elegance, perhaps reflecting the austerity of the post-war years. My particular favourites are the Queen’s bedroom, the Queen’s sitting room/study, where she would work on official papers, and the drawing-room. They are all decorated in a light and airy comfortable country house style. The drawing room is a perfect family space for relaxing with coffee and chocolates after dinner, playing games and chatting, it even has a baby grand piano where Princess Margaret and Princess Diana used to play. The Duke of Edinburgh’s rooms are more masculine, with dark wood, in a forward-thinking mid-century style. Britannia was decommissioned in 1997 and is now open to tourists to enjoy. 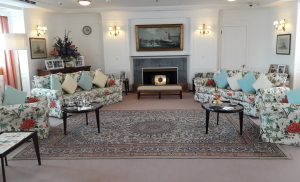 Whatever your personal tastes, I hope that when you visit Britain you find your ideal house and garden.

Caroline Piper is a London Blue Badge Tourist Guide and owner of Piper Tours, specialising in tours of London and southern England. She is also a Cambridge University history graduate.