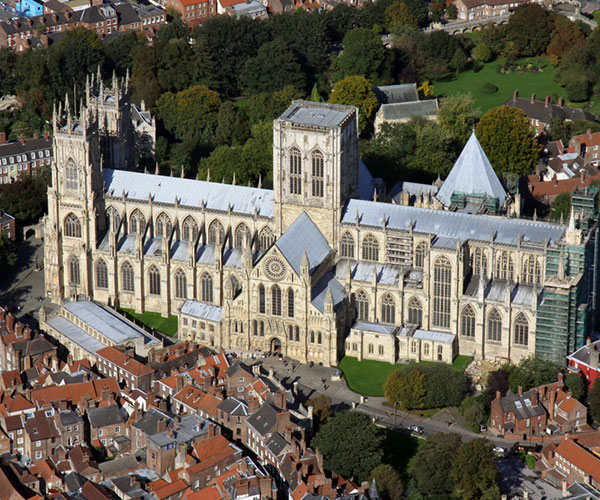 York Minster is not just a magnificent Gothic cathedral but also a saga of triumph and disaster throughout its 900 years of existence. Steve Sutcliffe, Blue Badge Guide for Yorkshire, takes us on a journey through time to discover the human stories inside the Minster walls. 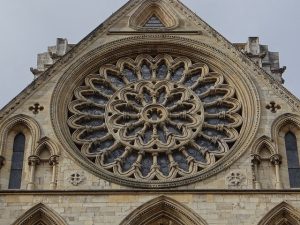 250 years to build
“York Minster was built between 1225 and 1475, which was the period of the Black Death and the Wars of the Roses. In 1407 the Central Tower collapsed and the King’s own Master Mason was involved in the repair work. This must have affected the building of the Great East Window, the largest stained-glass window in the country, built between 1405 and 1408 for just £56! The recent restoration of the window cost over £10.5m and took 10 years to complete.

In the 16th and 17th century, the Minster had to contend with a change of religion as that man Henry V111 made himself head of his own church and created religious conflicts for centuries. Another man is credited with saving the Minsters 128 stained glass windows; Lord General Fairfax. After the Battle of Marston Moor in 1644, he ordered that anyone damaging the buildings and windows would be shot on sight. 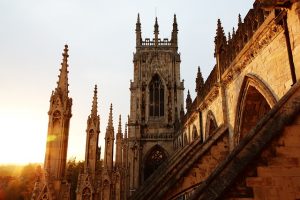 3 great fires and 3 great restorations
Fire! The first of the 3 great fires in the Minster happened in 1829 when Johnathan Martin decided to burn down the organ and quire. He was captured in Hexham one week later, found to be mentally unstable and sent to an asylum. The roof was replaced with teak, which was a first in the country.

The second fire was also caused by human frailty when a candle was left alight in the South West tower in May 1840.

Mother Nature was responsible for the third fire in July 1984 as lightning struck the South Transept. This caused an electrical fire in the roof and the Rose window’s 7,000 pieces of glass cracked in 40,000 places. The solder had melted but not one of the pieces of glass fell out. This made restoration possible. Carried out by Peter Gibson of the York Glaziers Trust, using resin to glue the glass together for the first time anywhere in the world. 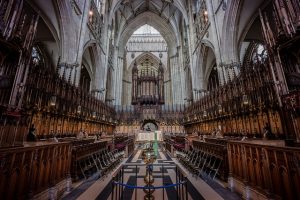 Stained Glass, world leaders in preservation
When I talk about the stained-glass windows, I try to imagine the effort and skill involved in removing all these very large and very heavy windows.  After the Zeppelin raids of 1916 and during the 2nd World War, all the stained glass windows were removed from the Minster. They were moved to remote parts of North Yorkshire, like Hovingham Hall, where the Duchess of Kent was born and was the bride in the last Royal Wedding in the Minster in July 1961.

There are so many stories about this Gothic Cathedral above ground, but the greatest danger to its existence came in 1967, below ground. This is when cracks appeared in one of the 4 pillars holding up the central tower. A full investigation found deep cracks in the foundations which would lead to total collapse unless fixed straight away! This became an engineering project and also a discovery of the Roman Fortress, underneath the Minster. “The Great Dig” as it became known, led to lots of new information about how the Minster was built and how the Romans and Anglo Saxons lived before.”

Find out more of the stories behind the scenery of York Minster on a Blue Badge private guided tour.