As the countdown to Christmas begins, join writer and guide Antony Robbins, aka Mr Londoner, in the first instalment of his two-part Christmas blog. As ever, Mr Londoner takes a sideways sweep at celebrating the Festive Season in the capital.

“London is at its absolute best at Christmas. A wander along the Dickensian lanes and alleys of the City of London, the night before Christmas is just magical. Nestled in the shadow of glass and steel skyscrapers are long-lost Georgian coffee houses and peaceful neo-gothic churches. Somehow they still stand despite the march of modernity and the neighbourhood’s turbulent history. 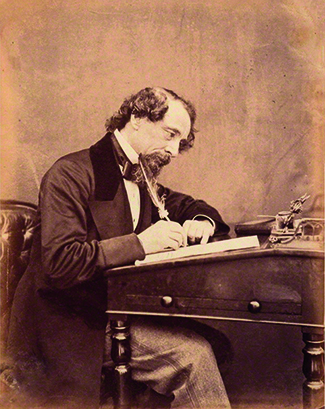 Charles Dickens at his desk

The invention of Christmas
The Charles Dickens Museum is in the heart of literary Bloomsbury. It opens Beautiful Books: Dickens and the Business of Christmas as part of its festive offer. The new exhibition explores how the Victorians invented Christmas during a time of turbulent social and political change. However, if Ebenezer Scrooge and Bob Cratchit just aren’t your bag then there’s always something a tad more Millennial just around the corner. 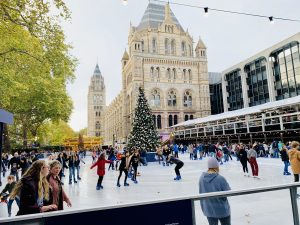 Date with a dinosaur
Many families enjoy the Winter Wonderland event in Hyde Park. I love seeing it from the air: its Christmas lights twinkling as your plane banks over central London on its final approach to Heathrow. If however, you don’t like glühwein – or the smell of those chocolate-coated nuts – then the huge ice rink at the Natural History Museum is a great alternative, popular with Londoners and visitors alike. Better yet, there’s a whole museum attached. Those dinosaur displays should keep even the most distracted kids entertained for a couple of hours. 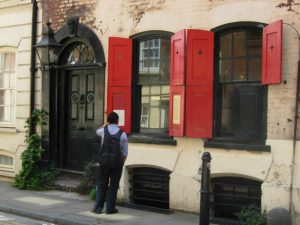 Silent night
If though you really do like a Dickensian feel to your Christmas … then head east for a ‘silent night’ event at 18 Folgate Street. Here in Spitalfields, among the retro-chic barbers, cool bars, and fashionista boutiques, is this beautiful late-18th-century house. The silent nights are a chance to explore the property’s ten rooms in candlelit tranquillity. The property is a time capsule, exploring the progress of the fictional Jervis family (Protestant immigrants known as ‘Huguenots’) booted out of France in 1685 by King Louis X1V. The silent night visit ends with mulled wine, mince pies and a chance to meet the people behind this historic hidden gem of a property.

An immersive experience
The house is not a museum: it doesn’t aspire to be one. It’s all about the experience and the atmosphere here rather than strict historical accuracy. It was the brainchild of the late Dennis Severs, an American artist who, in 1979, bought into what was then a downtrodden and decidedly unfashionable neighbourhood. How things have changed. My Dickensian Christmas walks pay particular attention to this eclectic and ever-changing corner of hidden London. 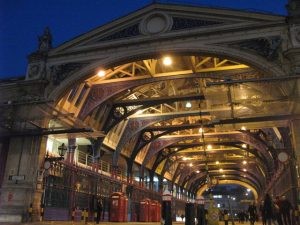 Take Hart
If you want to experience a proper London Christmas tradition, then it doesn’t come more authentic – or lively – than the Christmas Eve meat auction at Harts of Smithfield, a traditional wholesale butcher.

Going, going, gone
The whole of Charterhouse Street is closed to traffic for the auction, where great slabs of meat line the pavements (sidewalks) on hefty wooden pallets. Smithfield has been London’s meat market for 1,000 years. Appropriately the Smooth Field – as it was once known – was also one the City’s principal execution sites. The Christmas Eve auction, like the executions centuries earlier, continue to draw a boisterous (if less bloodthirsty) crowd. 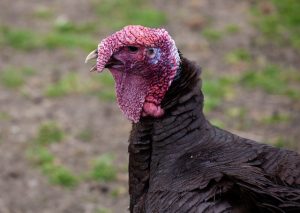 Meat-free
Watch as animated bidders compete for turkeys, huge sides of beef or great chunks of pork belly. However, there’s an element of mystery as to what one actually bids for: ‘Yer pay your money and yer take yer chance’ say the white-coated butchers through their throat-mounted microphones. Some people may get lucky on the toss of a coin. ‘Heads or tails’ shouts a butcher. If someone calls it right they walk away with the meaty lot they just bid for without paying a single penny.

Pantos and turkeys
Christmas turkey is actually an American import (Londoners of old celebrated the festive season with a roast goose). London, however, produced many of its own Christmas traditions. Panto, or ‘pantomime’ to give its proper name, remains a firm Yuletide fixture, albeit one with Italian origins. 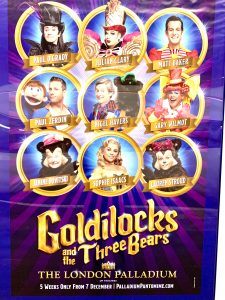 Pantomime poster for the London Palladium

National Treasure
This year’s offerings include Hackney Empire’s Dick Whittington and his Cat. This rags-to-riches story of a famous 14th century Lord Mayor of London, promises ‘An East End spin on time-honoured gags’. If you want a West End panto, then there’s the London Palladium’s Goldilocks and the Three Bears, starring national treasure Julian Clary. British ‘End of the pier’ humour is guaranteed.

Birth of the drag queen
Arch political satire and cross-dressing are historical elements of the panto experience. Although very much of our own times, this early example of gender fluidity harks back to the days of Elizabethan theatre. Back then, women were forbidden from ‘treading the boards’. These young men, the first so-called ‘queens of the drag’ excelled at moving about the stage in complicated female hooped and layered costumes. They plied their trade in theatres in Bankside, just south of the river. The drag queen was born….and she’s still going strong. 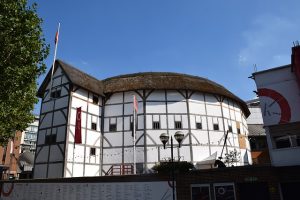 Shakespearean singalong
Bankside’s theatres offer ground-breaking art to this day. At Shakespeare’s Globe, the Bard’s work can be seen ‘in the round’ just as it was enjoyed by 17th-century audiences. 21st-century theatre-goers tend to be better behaved by comparison but there’s still an opportunity for enthusiastic audience participation. The Globe’s 2019 Christmas offering includes a series of festive singalongs. 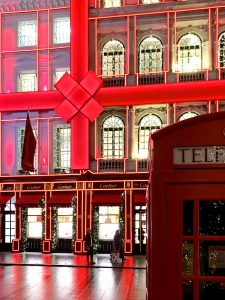 Let there be light
Requiring no ticket at all is a trip to marvel at the light fantastic. Oxford Street and Regent Street are famous for their festive illuminations. There will be stunning displays across the city – including in exclusive Marylebone and in London’s newest shopping destination, at the Coal Drop Yard in King’s Cross. This year, Savile Row – world-famous for its tailoring – is switching on its own bespoke Christmas lights for the first time in its history. 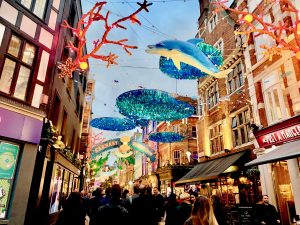 Fishy business
My favourite illuminations this year are in Soho’s Carnaby Street, where up-cycled bubble wrap and 1,500 recycled plastic bottles have been re-purposed as a surprising but sumptuous ocean display, featuring squid, dolphins, vibrant coral and a five-metre bubble-blowing whale. This fishy project is run in tandem with environmental campaign Project Zero. The power for the lighting is renewably-sourced and the lead-free paint is equally environmentally-friendly.

In part two of this blog, in mid-December, I’ll look at some of the history and folklore around a London Christmas and explore a few last-minute and unexpected options to enjoy the capital’s Festive Season in style.”