Trooping the Colour 2022 was an historic event that will live on in the memories of so many, particularly the thousands who travelled to central London to celebrate Her Majesty’s official birthday. But also, her Platinum Jubilee – 70 years of serving as our Queen.

Being amongst the crowd was special but trying to move through the busy main streets was very difficult. So my solution – take to the side streets. A wise decision. Passing by the Ritz Hotel on Piccadilly, I took a right into Arlington Street – this street dates back to the late 17th century. 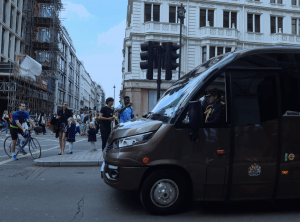 Building works are now part of the changing face of London – so an opportunity to peak behind the hoardings is tempting! What was there before?? 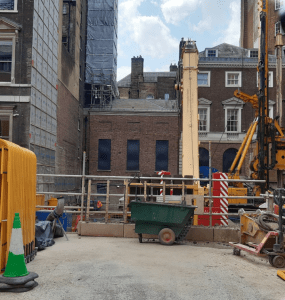 The pub on the corner of Arlington Street and Bennet Street is a modern building on a former pub site which dated back to the late 17th century. Many were unable to read or write, so signs with images helped people to recognise places on sight. In this image notice the blue post – this is the 18th century form of a “taxi rank” – two or four men would wait with their sedan chairs as featured for a customer. The transport was especially popular among the gentry. During the 17-18th century, the streets of London were filthy, so the Sedan chair helped in keeping the people’s expensive clothes and shoes clean. The customer would be taken through the streets and literally dropped off inside the hallways of their homes. The trough I think reflects the need to have water for horses or cattle. 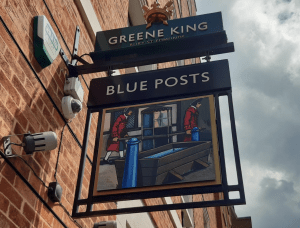 I continued to the end of the street where there are steps that lead down to the next street. Overhearing a conversation, “if you know these steps are here, you are a Londoner” – well an interesting viewpoint. I think curiosity and the desire to explore count as well, as the steps are not obvious from a distance. They lead into Park Place a small street. I walked along the terrace of houses of different ages and architectural styles, but it is one of the two late 17th century houses that caught my attention. One had two door knockers!! Why??!! Well, there isn’t an obvious answer; the house is used for a gentleman’s club called Pratt’s after a William Pratt who lived in the house in the 1840s. He was a steward for the Duke of Beaufort. 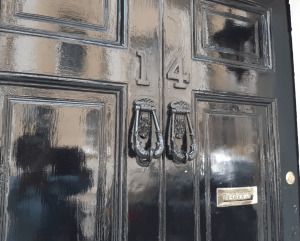 The Duke called at the house with his friends one evening and enjoyed themselves so much that they returned frequently. Eventually it become known as a gentlemen’s club. Today, Pratt’s has around 600 members, but only 14 can dine at one time at the single table in the basement dining room. To avoid confusion, all male staff members are referred to as ‘George’! The premises was once in the ownership of the 11th Duke of Devonshire whose sister-in-law was Kathleen Kennedy,  sister of U. S. President John F. Kennedy and U. S. Senators Robert F. Kennedy and Ted Kennedy.

My walk continued, crossing St James’s Street into Ryder Street. The street may have been named after the Master Carpenter to Charles II. I spied a shop I was not familiar with – Arnold Wiggins & Sons Ltd. The windows appeared empty with just picture frames on display. Well, it was the Royal Warrant that explained why. This company provides both antique and reproduction frames for Old Master and Modern paintings and works on paper. The Royal Warrant was granted in 1991 as a Picture Frame Maker to Queen Elizabeth the Queen Mother and Her Majesty The Queen. A royal warrant is a prestigious document. It is issued to traders and suppliers who provide goods and services to the general royalty or someone who is a member of the royal family. By having the warrant, the supplier is permitted to advertise that they supply to the royalty – thus a good elevating demand and trust in their services. The royal warrant is hard to gain but easy to lose if the company or service does not follow the conditions set out by the Royal Warrants Association. 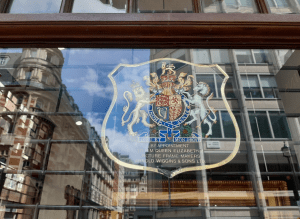 Into Bury Street – there is another shop displaying a Royal Warrant this time on a wooden platform. 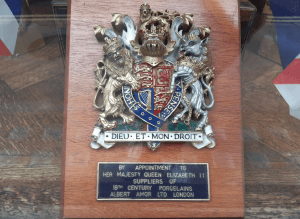 In 1921 Mr. Amor was appointed Antiquary to Her Majesty Queen Mary. This was the first time that such a post had been conferred upon a person. Mr. Amor’s duties for seeking suitable acquisitions meant he was frequently summoned to the Palace with items to be considered for the Royal Collection. The form continues to work with private collectors all over the world who seek rare 18th century porcelain. How much would you pay for a piece of porcelain? Well, if bidding in an auction for such objects, there is no telling what the final bid will be. 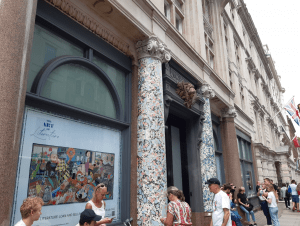 I entered King Street where a famous auction house is situated – Christies. Founded in 1766, Christie’s is a world-leading art and luxury business. In 2017 Christie’s achieved the world record price for an artwork at auction – Leonardo da Vinci’s Salvador Mundi. It sold for $430m. Luckily, I had the chance to see this particular painting at an exhibition at the National Gallery in 2011. It is now in a private collection.

Onto to Pall Mall. The street’s name is derived from a ball game played there during the 17th century introduced by James I. The game is similar to croquet but its Italian name – pallamaglio – literally means ball-mallet. No ball games are played here now! Since the 18th century, this street is best known for its gentlemen’s clubs where no women were allowed within their walls! Some have changed their rules to allow women to be members but there are still many that are holding out – times they are a changing – resistance is futile!

I continued down Pall Mall and saw in the window of a private art gallery portraits of Her Majesty. Her official title Elizabeth II, by the Grace of God, of the United Kingdom of Great Britain and Northern Ireland and of her other realms and territories Queen, Head of the Commonwealth,
Defender of the Faith. 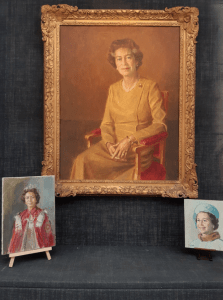 I finally arrived at Trafalgar Square back amongst the throng of the crowds. The square is named after a famous Naval battle was fought between the English and the French on 21st October 1805. The English were victorious but at the cost of their hero Lord Admiral Horatio Nelson, killed by a French sniper. 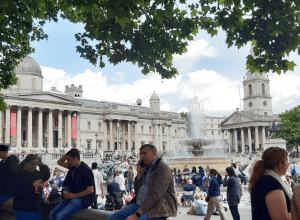 The Queen’s Platinum Jubilee will remain a special occasion, remembered by many as an unprecedented historic event. There will not be another British monarch in our lifetime who will achieve this milestone of 70 years. God Save the Queen! 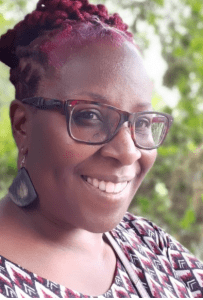