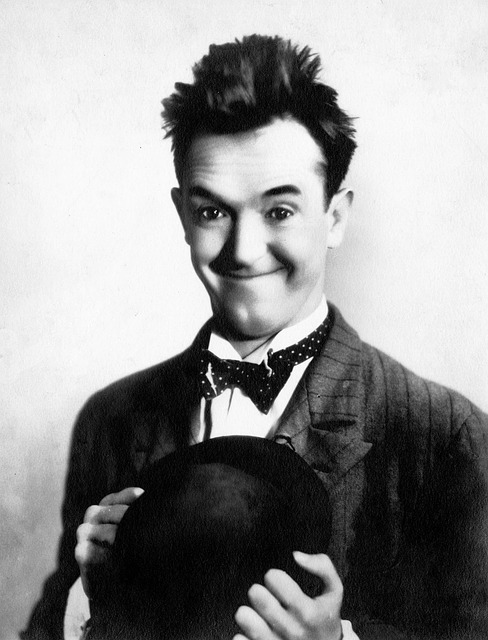 One of the world’s best known and loved comedians Arthur Stanley Jefferson was born 16th June 1890 in Ulverston north of the Sands which was until 1974 in the county of Lancashire. In 1910 he emigrated to America and is best known for his antics with his partner Oliver Hardy who he met in the States.

Foundry Cottage where he was born was the maternal home of his grandmother and grandfather George and Sarah Metcalf. Their daughter was an actress accompanying her husband travelling around the country and it was to be Stan’s home for 6/7 years. Foundry Cottage so named because it had a foundry at the end of it was renamed in the mid-1890s to Argyle Street and it is here you will find a plaque commemorating his birth.

Although he had other siblings Stan was the only one to live with his grandparents as he had bad health and thought the travelling would be bad for him. At the age of 20, he made his first trip to America as a member of the Fred Karno musical comedy troupe which included Charlie Chaplin and Stan was his understudy for a period of time. In the States, he changed his stage name as Stan Jefferson contained 13 letters which he thought was unlucky. He chose the name Stan Laurel as he and his partner Mae thought it to be lucky (which it did turn out to be).

He was very much a family man and returned to England many times but on 24th May 1947, he returned with his comedy duo partner Oliver Hardy. The two gave a speech on the balcony of the Coronation Hall and then were treated to a civic reception along with their wives. They arrived in an open top car and were met by a huge crowd. Later in 2009, also to a huge crowd outside the Coronation Hall, Ken Dodd opened the Laurel and Hardy statue designed and sculpted by Graham Ibbeson. Graham also designed the Eric Morecambe statue which is situated only 15 miles away on the shores of Morecambe Bay. 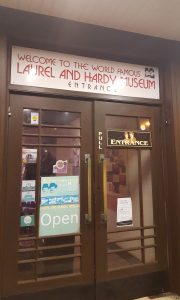 Crossing the Bay by train is a wonderful approach to Ulverston and one of the most scenic train journeys in England. The Laurel and Hardy Museum on the ground floor of the Roxy Cinema opened in April 2009. It started out as “one man’s collection stemming from Bill Cubins love of the boys” and was originally based behind his electrical shop on King Street. Bill loved Ulverston and was the Mayor in 1976.

When he died in 1997 the museum continued, first being run by his daughter Marian and now by his grandson Mark Greenhow. Mark is as passionate about Ulverston and “the boys” as his grandfather was and is always enthusiastic to chat with anyone visiting. Do ring before going to check he is available.

Whilst in Ulverston visit the Bullring Auction Building, in Stan’s day a weekly livestock auction but now home to the Ulverston Brewing Company and brewer of many known Laurel and Hardy named beers including Laughing Gravy (the name of their dog). This dog is also included in the statue sited outside the Coronation Hall. Many of the beers can be drunk in the Stan Laurel pub only a short walk from Stan’s home in Argyle street. 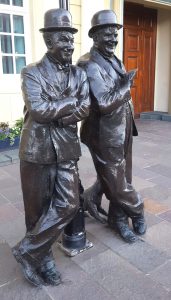 Laurel and Hardy statue at Ulverston

Sons of the Desert is devoted to keeping the lives and works of Stan Laurel and Oliver Hardy before the public, and to having a good time whilst doing it. The group takes its name from a lodge that the comedians belong to in the 1933 film Sons of the Desert. In keeping with the tongue-in-cheek “desert” theme, each local chapter of the society is called a “tent,” and is named after a Laurel & Hardy film. Worldwide, there are well over 100 active tents, whose members meet regularly to enjoy Laurel & Hardy movies in an informal atmosphere.

Perhaps we may have a revival of the “Trail of the Lonesome Pine” which spent 10 weeks in the pop charts reaching Number 2 being kept off the Top Position by Queen’s “Bohemian Rhapsody”.

Jan Nicholson is a Blue Badge Guide based in Cumbria. Contact her for a Stan Laurel themed tour of Ulverston.

On trend: The Design Museum

Blue Badge Guides in the News

We are Good to Go - and what this means to your tour!