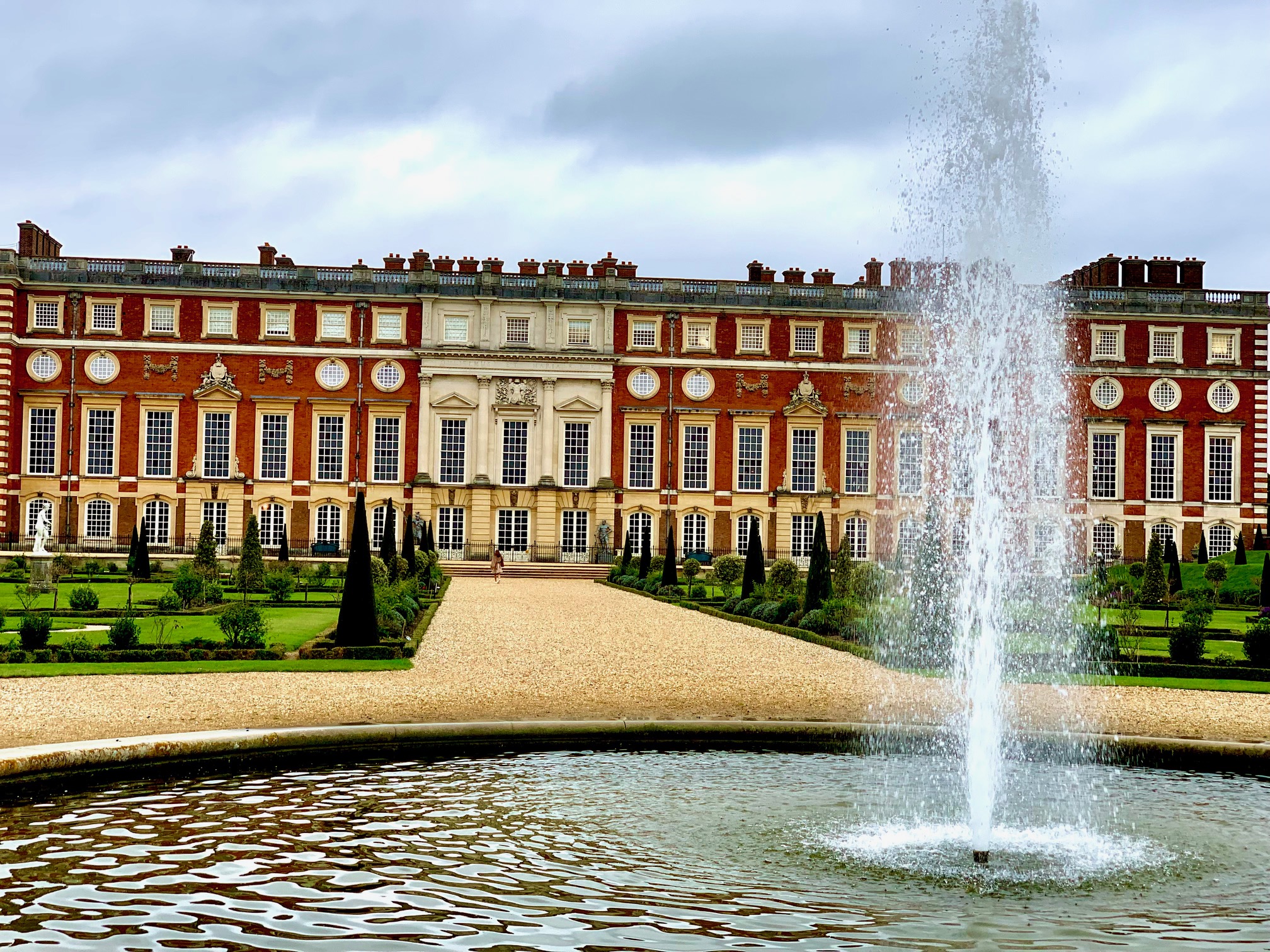 Mr Londoner heads upstream to explore one of the great survivors of the Tudor era.

It was once owned by the monks

Hampton Court, once called ‘the loveliest palace in Europe’, is always associated with Henry VIII. In fact it’s one of only two remaining palaces created by the despotic Tudor King. It was actually commissioned, however, by Henry’s right-hand man, the Archbishop of York – and later Cardinal – Thomas Wolsey, between 1515 and 1521.

Wolsey had a grand sense of his own self-importance. The entitled and egotistical cleric wanted a grand statement of a home and a state-of-the-art HQ. He determined that his Renaissance palace would rival those of European bishops. And Wolsey had an instruction manual to help him achieve his dreams, Paolo Cortese’s 1510 De Cardina Lata – a source-book for top clerics. Included among the dos and don’ts was advice on palatial architecture befitting a senior churchman. Wolsey was rapidly becoming the King’s richest subject. With 280 extravagantly-furnished rooms, and a staff of about 500, his home rivalled, or perhaps even surpassed, the splendour of a royal palace. 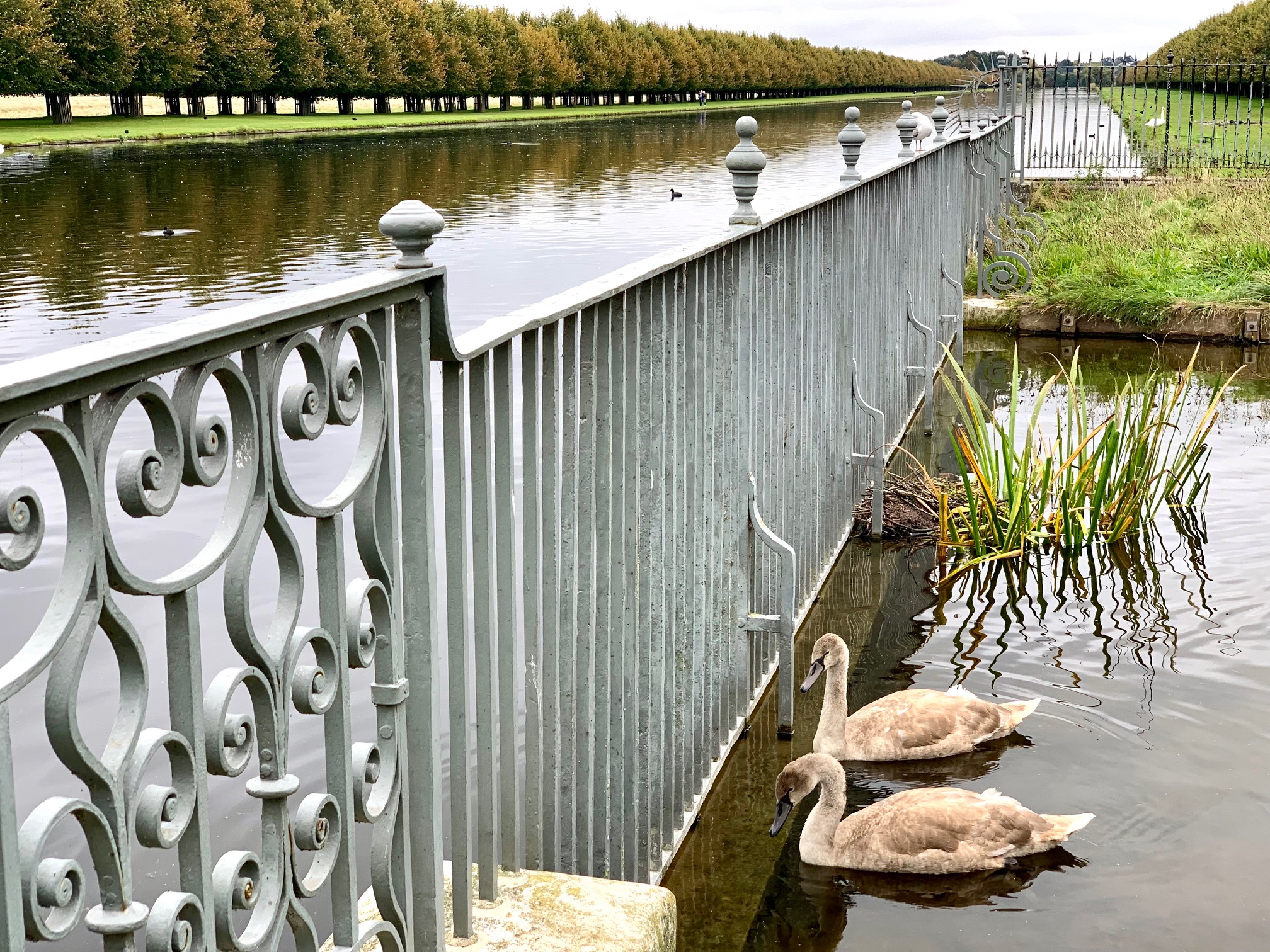 Wolsey, however, fell out with Henry over his failure to secure the King’s divorce from his Queen, Katherine of Aragon, in order to marry Anne Boleyn. The troubled Cardinal gifted the palace to Henry in order to placate him. It didn’t work though. Henry had his Chancellor charged with treason. The 57 year-old cardinal died in Leicester in 1529 while en-route from York to London for trial.

Before both Henry and Wolsey, the land actually belonged to the abbots of the Knights of St John Hospitallers, from about 1236. Today, the St John’s Ambulance as the organisation has become, provides volunteer first-aid training and medical support at public events.

Henry, never known for his discipline and restraint, loved things to excess. Hampton Court’s magnificent kitchens are one of his legacies. Hog, beef, swan and perch, – the later farmed in the palace’s fish ponds – were regular items on the menu. The kitchen produced over a thousand meals a day, burning over three million logs every year just to keep the fires going. Working in the kitchens was a great move for local people because it meant a constant supply of free food during far-from-certain times. Our expression ‘three square meals a day’ comes from the wooden platters used at the palace. 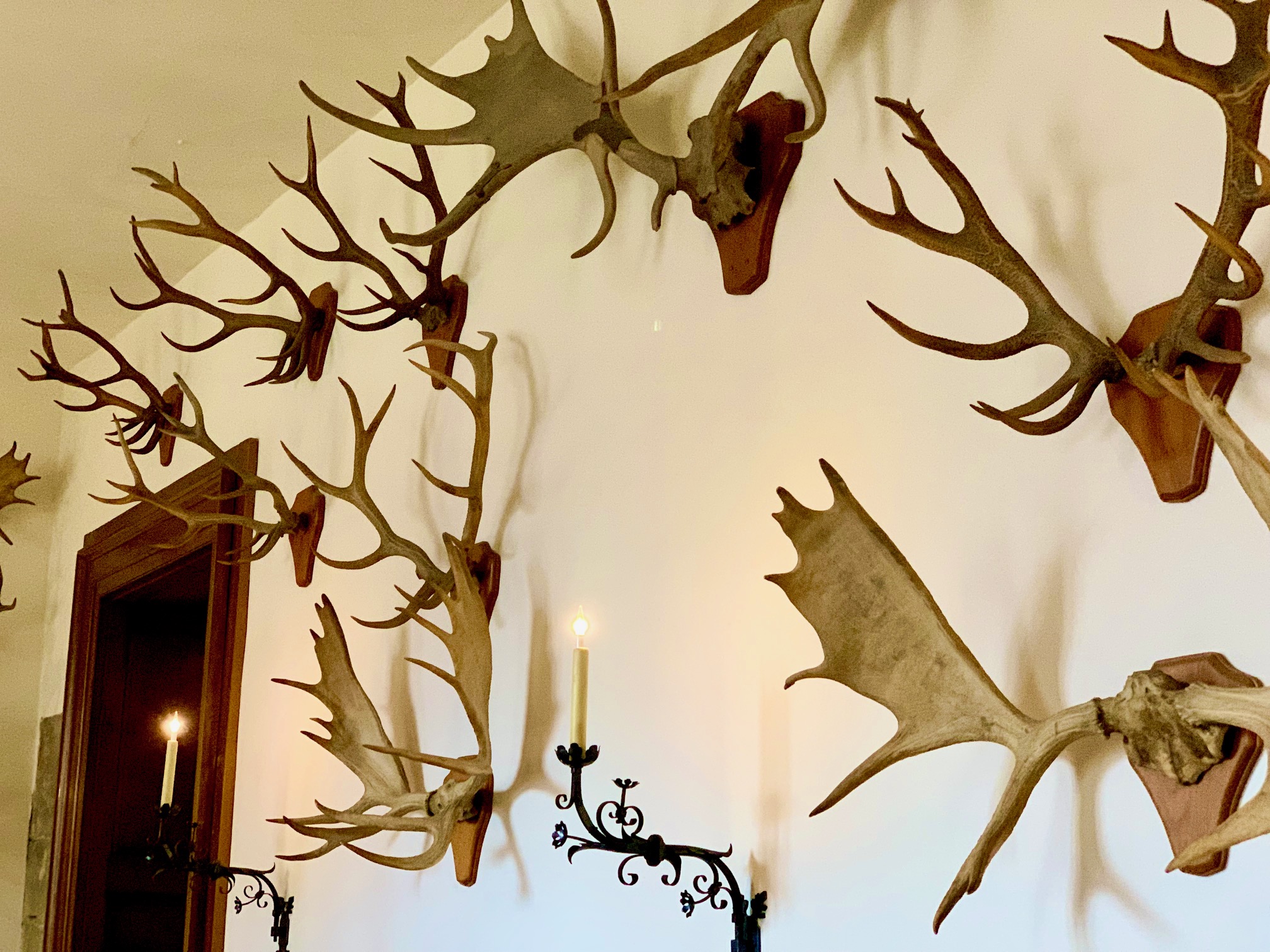 Along with the kitchens, Henry added his Great Hall, with its magnificent hammer-beamed oak ceiling, for his lavish entertaining. He also built the beautiful chapel with its wooden fan-vaulted ceiling, redecorated by Sir Christopher Wren in the 17th century. These elements remain some of the architectural gems at Hampton Court.

It witnessed some of English history’s most momentous events

Five of Henry VIII’s wives lived at the palace. Anne Boleyn was arrested here in 1536 and Henry was on the real tennis court when he received the news of her beheading. Henry’s son – the short-lived King Edward VI – was born here. His mother, Jane Seymour, died in the process. Catherine Howard has, it’s said, never left the building, with sightings of her ghost over the decades. Catherine, it’s said, was stopped by guards from disturbing the King at mass in the Chapel Royal to plead for her life. 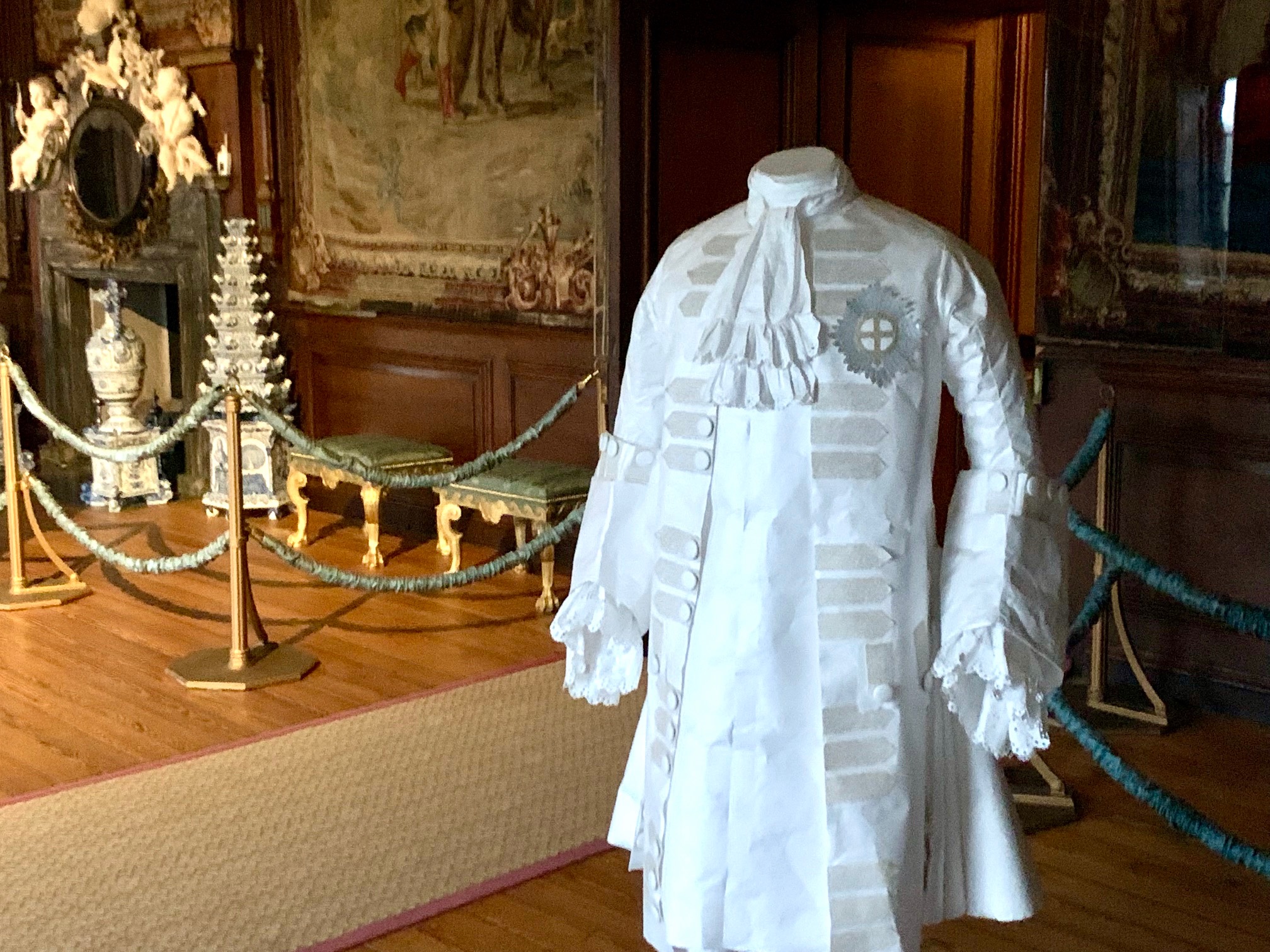 Paper costumes animate the space in the Georgian apartments @Meetmrlondoner

Queen Elizabeth was held under house arrest at Hampton Court by her half-sister, Queen Mary. Later, while Queen, Elizabeth and her courtiers decided the fate of her cousin, Mary Stuart, better known as Mary Queen of Scots, beheaded in 1587. Charles I, who in 1649, also lost his head, was also imprisoned here before his trial. After the King’s execution and the dissolution of the monarchy, Oliver Cromwell, the Lord Protector, moved in. Cromwell’s wife is credited with saving some of Hampton Court’s treasures from destruction by Puritan zealots. 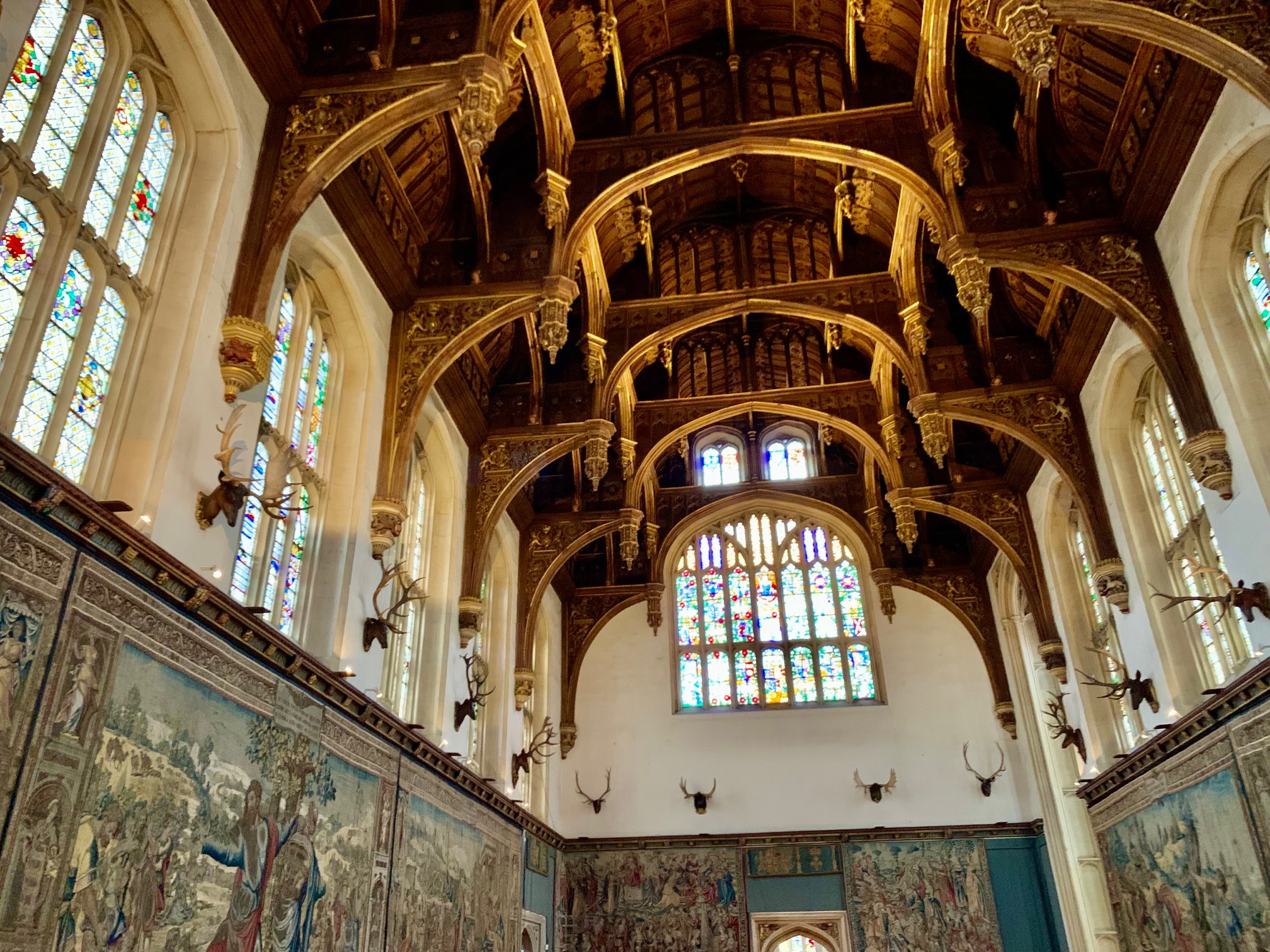 The Great Hall is England’s oldest surviving Elizabethan theatre. No expense was spared in its construction. Shakespeare acted in some of his own plays here. Queen Anne also loved treading the boards, performing in dramas here written by Samuel Daniel. Baroque architect Inigo Jones (who created Covent Garden Piazza and the Banquetting House) designed the scenery.

The King James’s Bible has its origins here, following the 1604 Hampton Court conference between the King and the Puritans. King William III’s fell after his horse hit a molehill in 1702. Some say this may have hastened his death, at Kensington Palace, from pneumonia the same year.

Hampton Court has fallen in and out of fashion over the decades. Kings and queens, their retinues and followers gravitated towards the centre of courtly action at Whitehall Palace. That changed overnight in 1698, when it burned down, after an unfortunate maid knocked over a candle. William and Mary, who had become joint monarchs in 1688, in any case liked the healthier air of the countryside as opposed to the damp riverside setting of Whitehall Palace and so set out to live in a much-modernised Hampton Court. 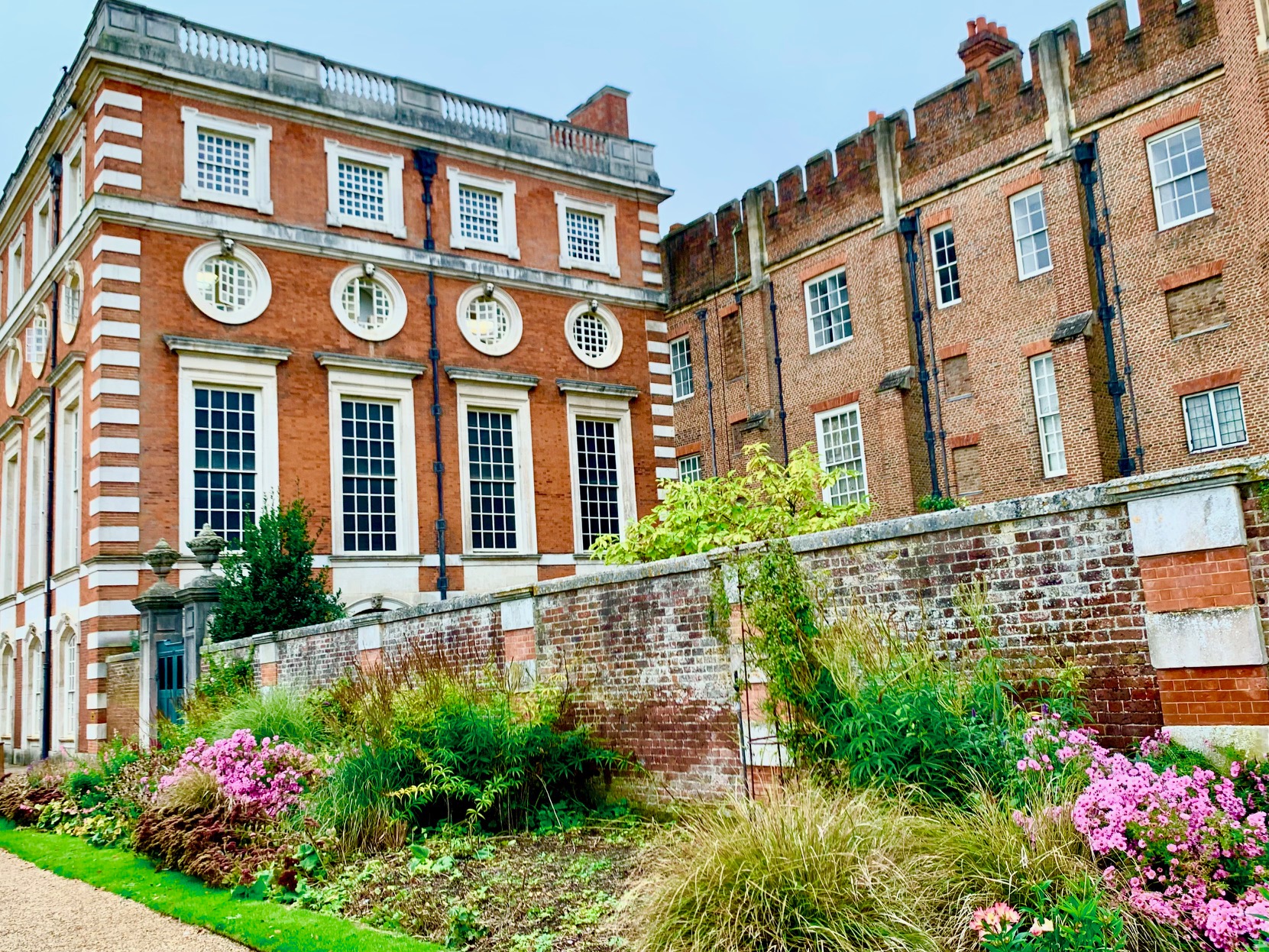 Spot the join. Tne Tudor and Georgain architecture are very different but use the same coloured brick @Meetmrlondoner

Sir Christopher Wren was brought in during 1688 to demolish almost all of the 200-year-old Tudor palace and re-create it in the Baroque style – as a sort of Renaissance Versailles. The money ran out however. And so much of the original palace still stands. Today the Tudor building sits alongside the 17th constructions. The only thing that truly unites the architecture is the use of similar colour red brickwork.

In time, the new-look palace eventually fell out of favour once again. George II was the last monarch to reside at Hampton Court. Queen Victoria opened its doors to the public. A devastating fire in the south wing of the Fountain Court began with a burning candle in 1986. Lady Daphne Gale died in the fire caused by a neglected candle in one of the Grace and Favour apartments. This accommodation was given to those who had made notable contributions to society but needed support in old age. Lady Gale was the widow of Major General ‘Windy’ Gale – a veteran of the D-Day landings. Sadly she died in the fire and the event led to the end of the Grace and Favour arrangements at Hampton Court. Restoration was completed in 1992.

Tennis takes its name from the French ‘Tenez’ – (hold or take heed). Real tennis is more complex than modern lawn tennis. Typically it’s played as the best of three, sometimes five, rounds. Racquets are shorter and of a distinctly artisan appearance. The balls are hand-made and cork-covered. Its origins lie in 12th century France but the rules of the game took about 300 years to evolve. The tennis courts are still in use today. It’s a common site to see players walking from the railway station over Hampton Court Bridge with their distinctively-shaped real tennis racquets.

Hampton Court has everything for garden lovers. There are formal and informal green spaces, some decorative, some productive. There’s the Harry Potter-ish Knot Garden. There’s a maze, probably planted in about 1690, for William III, who loved formal gardens. The privy Garden is a 1995 recreation of what records show existed in the 17th century. 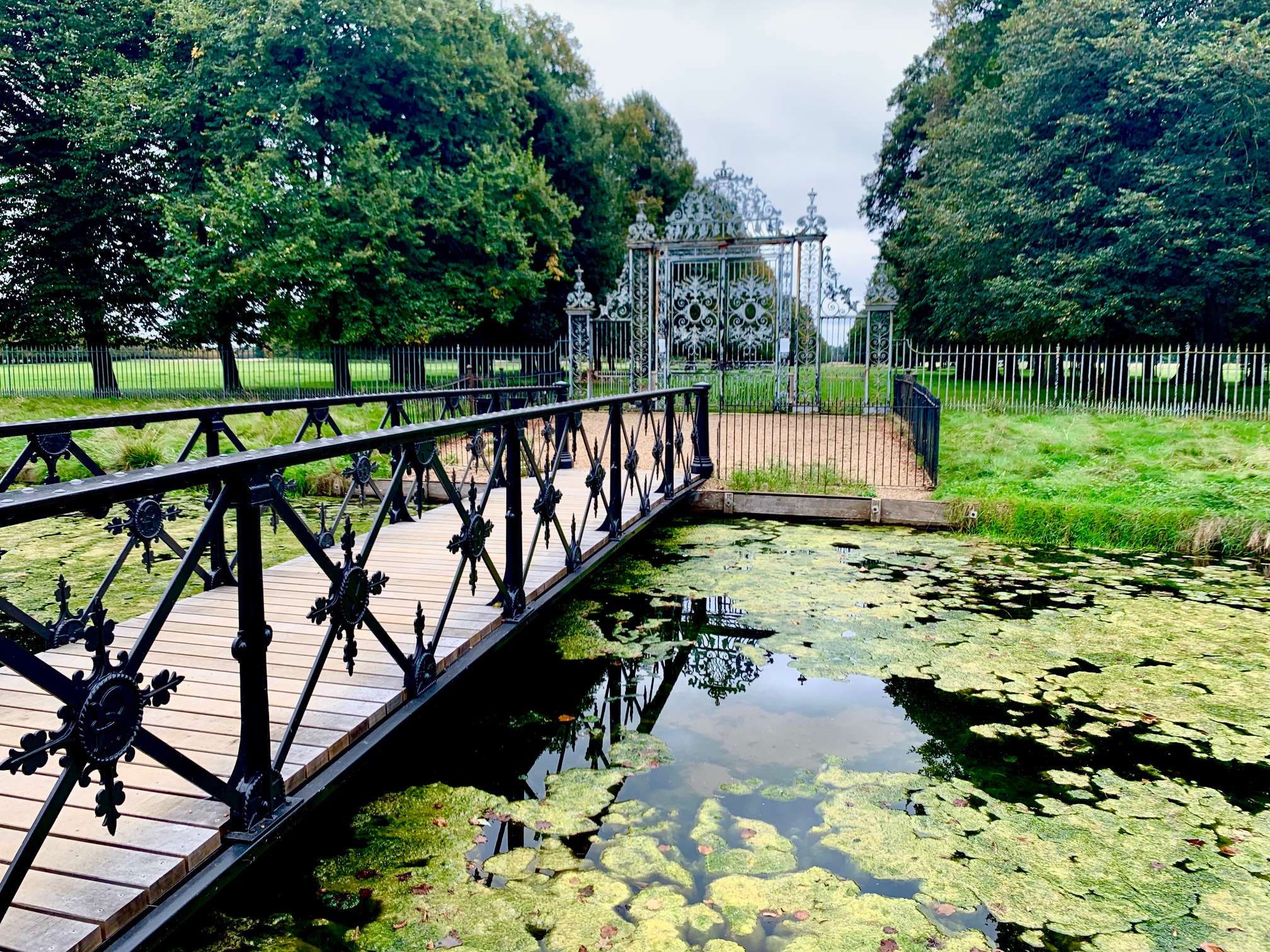 Hampton Court saw the planting of exotic species bought back by adventurers like Hawkins, Drake and Raleigh. These crops include tobacco and the potato. Today the beautiful walled kitchen gardens – once the site of Henry VIII’s jousting field or tilt yard – grow fresh produce in the traditional way. There’s an ancient vine too, that still produces grapes. Capability Brown planted it in 1768. The grounds continue to evolve: the Magic Garden was created in 2016 to keep the kids happy. The mysterious French Huguenot Protestant émigré Jean Tijou, like Grinling Gibbons, had worked extensively with Wren on the creation of St Paul’s Cathedral. Tijou elevated the craft of the blacksmith to a high art. Tijou’s iron gates grace the Hampton Court river frontage to this day.

And if gardens are not your thing, there’s always the art. There’s the work of Raphael and Mantegna, which are among 400 purchases installed by art lover and collector Charles II. Look up to wonder at Sir James Thornhill’s dramatic ceiling paintings. Discover the Chapel Royal’s 17th century limewood carving by Grinling Gibbons.

Henry VIII’s tapestry the Story of Abraham still hangs in the Great Hall. The Triumph of Bacchus and the Labours of Hercules grace the King’s Presence Chamber. You’ll find multiple works of Antonio Verrio, including the Satire of the Caesars, which hangs on the great staircase. Sir Peter Lely painted the fashionable ladies of the royal court. The Hampton Court Beauties hang in the Orangery. The Windsor Beauties grace the Georgian apartments’ Communication Gallery. 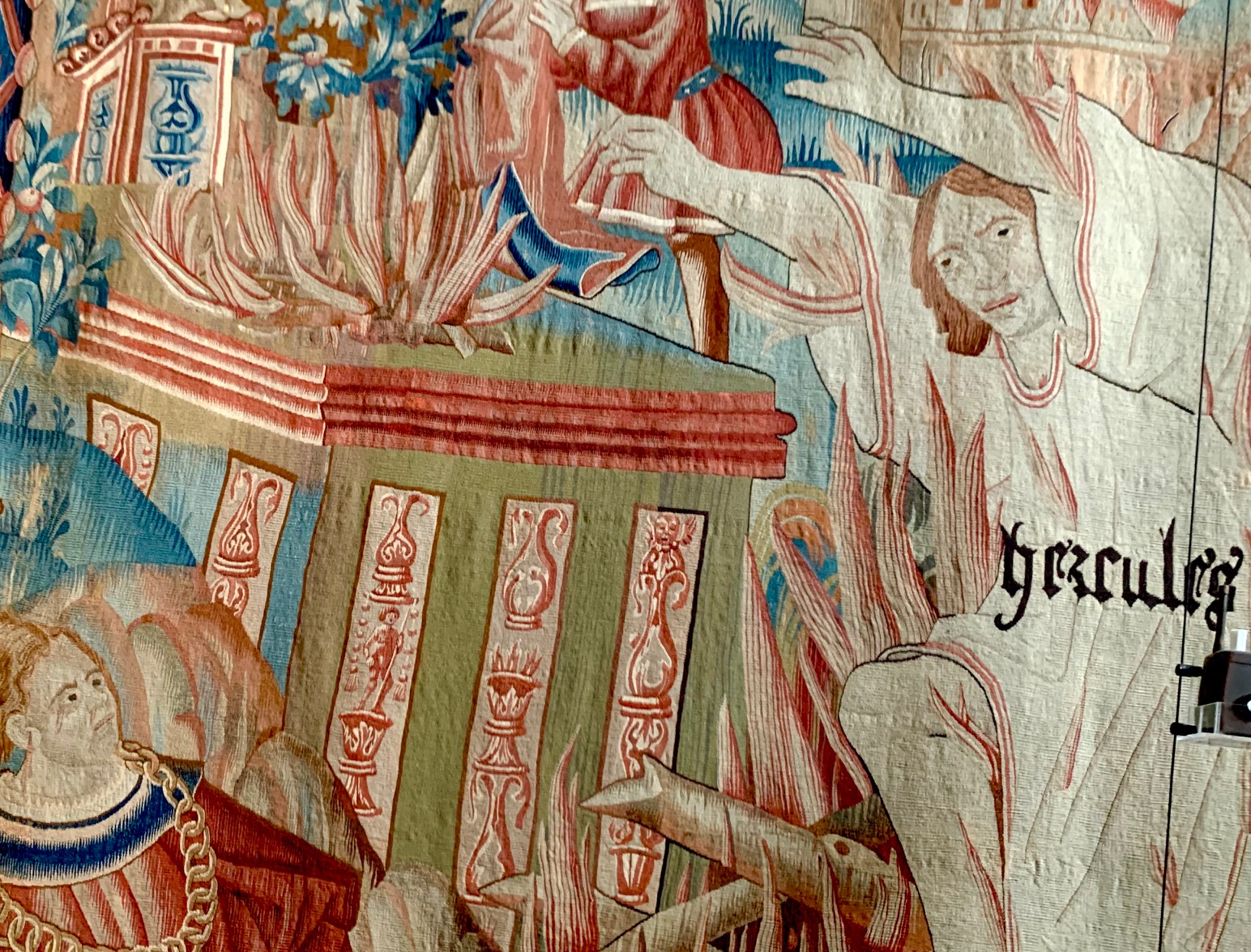 The Labours of Hercules depicted in an exquisite Tudor tapestry @Meetmrlondoner

Wolsey-era art includes the terracotta medallions by Giovanni de Maiano in the Base (basse, is French for ‘lower’) Court. The nine canvases the Triumphs of Caesar by Mantegna, were installed by Charles I. Today they have their very own gallery.

Hampton Court truly has something for everyone.