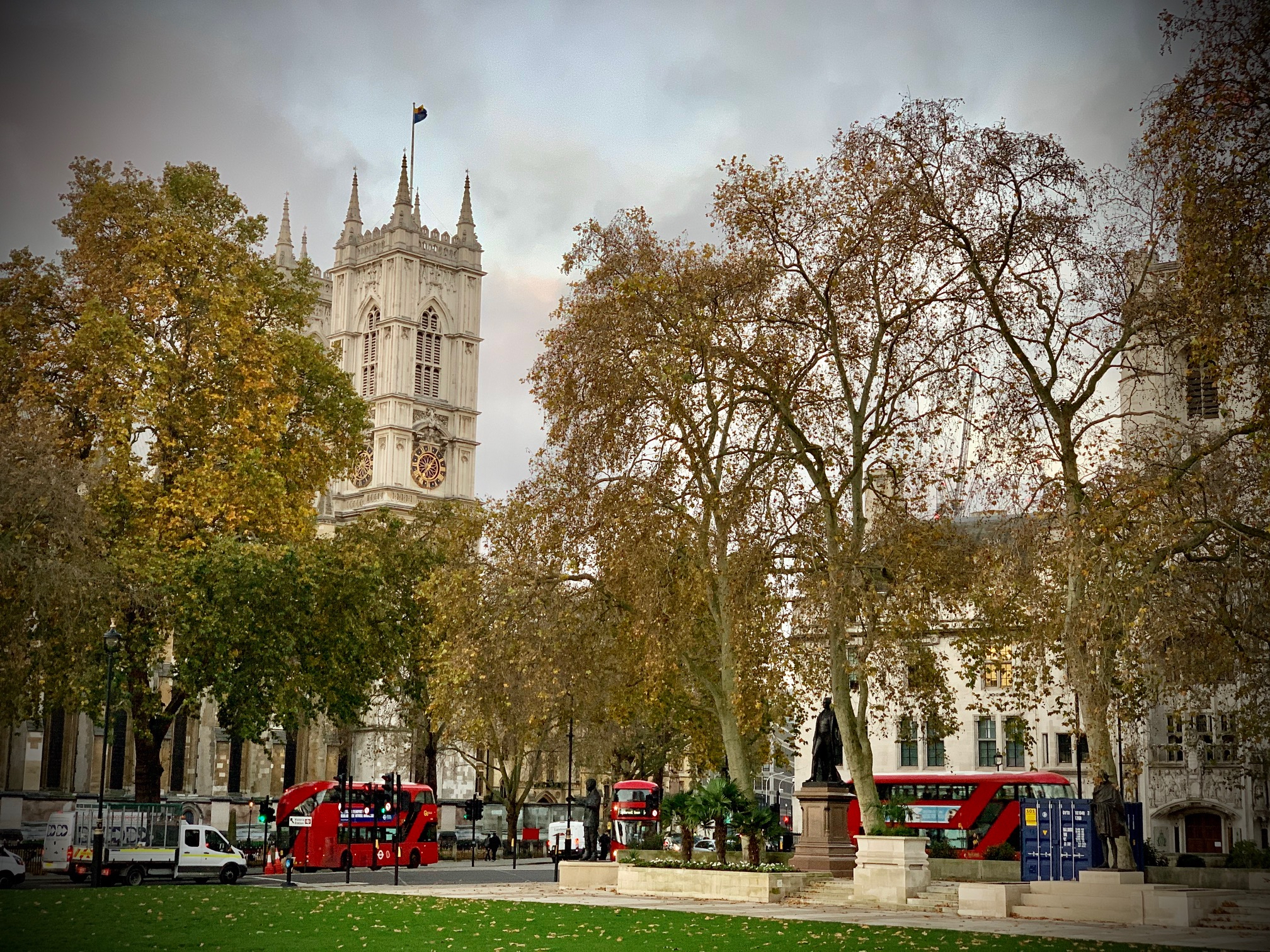 Mr Londoner enjoys a walk through an empty Westminster

Westminster in lockdown is a peaceful place. Parliament Square is deserted. You might see the occasional cyclist, or perhaps a civil servant nipping out for a lunchtime sandwich. But most people are working from home so all is calm in this usually busy, sometimes chaotic, traffic artery. Now is a good time to enjoy views of Westminster Abbey, St Margaret’s Church and the UK Supreme Court.

Enjoying the architecture of Parliament and Big Ben is a bit trickier, however. Big Ben, or The Elizabeth Tower to give it its correct title, is wrapped in a full metal jacket of scaffolding. In fact the whole of the Palace of Westminster, completed in the 1860s, needs a minimum £50m of emergency repairs just to keep it going as the functioning home of government. The bill for complete refurbishment could rise to the tune of £5.6bn. 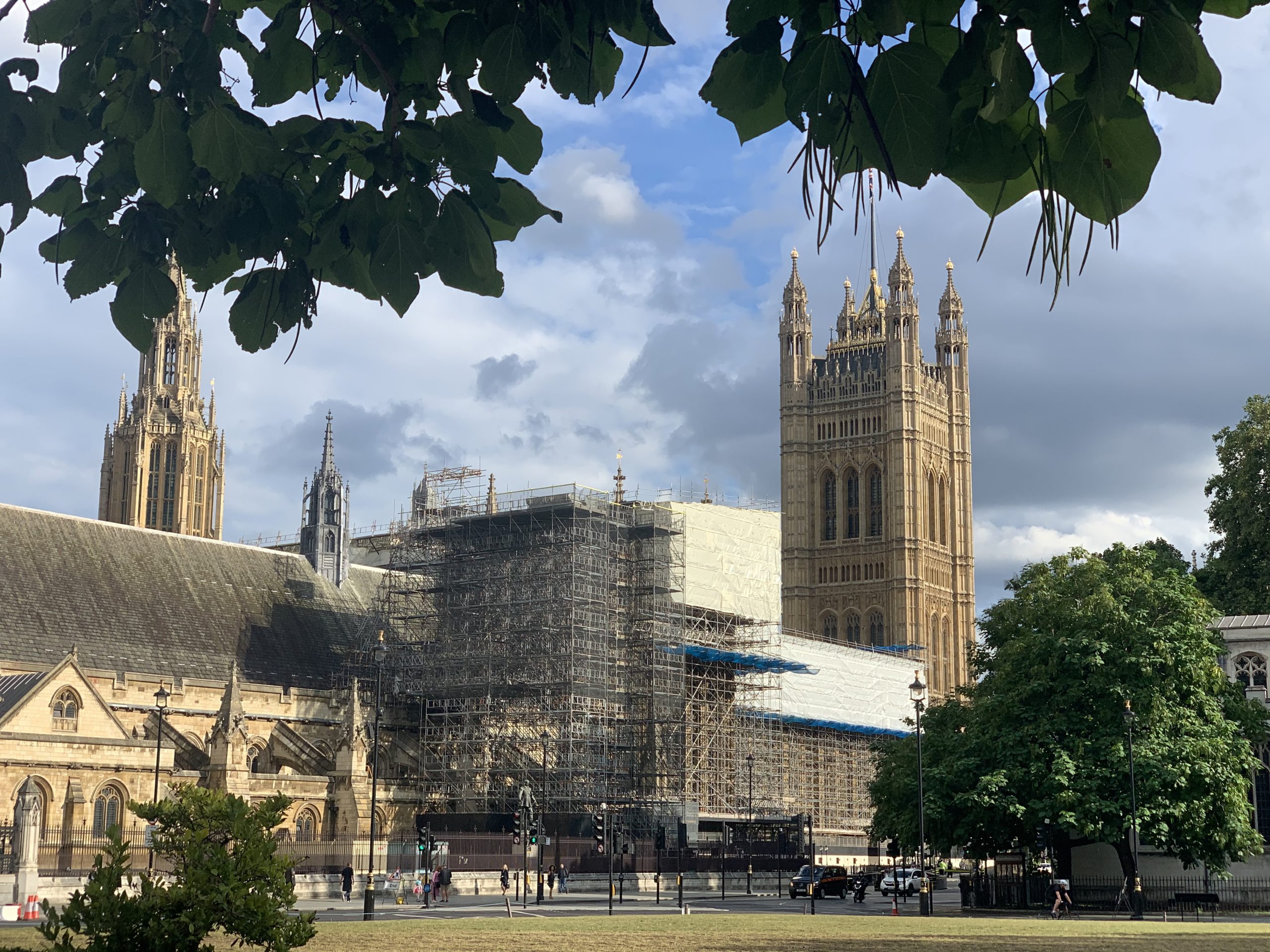 The Palace of Westminster is in urgent need of repair. @Meetmrlondoner

Longer-term, big decisions need to be taken about what to do with the building, which is part of a UNESCO world heritage site – one of four in London. The Palace is freezing cold in winter, boiling hot in summer and has leaky plumbing. This sometimes floods into the Chamber of the House of Commons. The current focus on the pandemic, a faltering economy and an unresolved Brexit have put the debate about the future of the Palace of Westminster on the back burner.

The calm and the quiet of lockdown, however, affords the visitor more chance to take in the statues in Parliament Square. There’s the famous 12-foot bronze of Churchill wrapped in his military greatcoat, facing down the gathering storm. Next door is the wonderfully-eccentric statue of the cape-wearing ‘Welsh Wizard’ David Lloyd George. He served as our last Liberal Prime Minister between 1916 and 1922. Nearby is the elegantly assured form of Lord Palmerston, resplendent in his Victorian frock-coat. 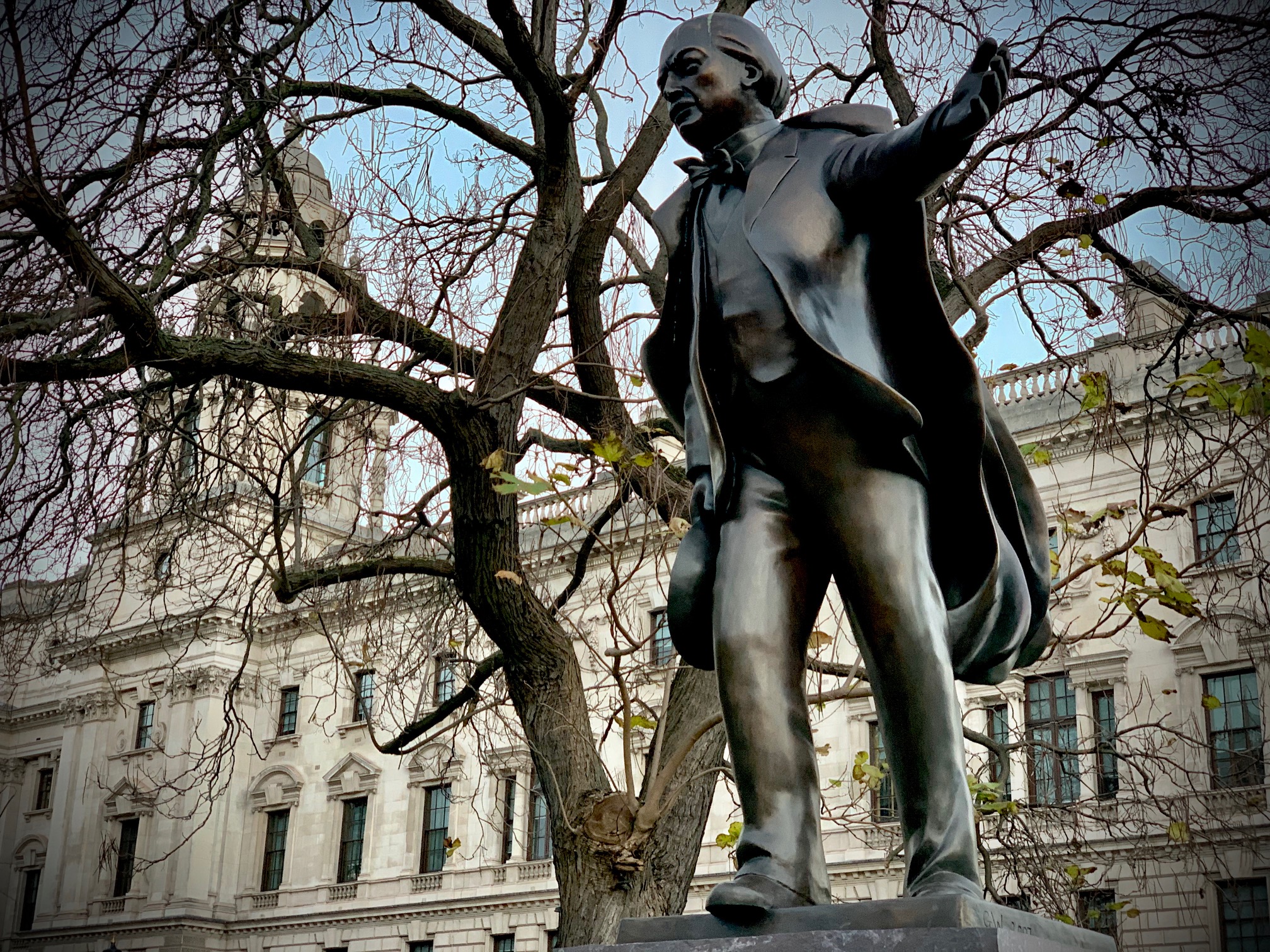 Rest assured it’s not all dead white men commemorated in Parliament Square. The most recent addition is Gillian Wearing’s 2018 tribute to Millicent Fawcett and her Suffragists. The Suffragists used legal routes to campaign for votes for women, in contrast to the Suffragettes, who sometimes broke the law to further their cause. Suffragette leader Emmeline Pankhurst is commemorated in a 1930 statue by AG Walker. It’s in nearby Victoria Tower Gardens.

Back in Parliament Square, next to Nelson Mandela’s statue, there’s Philip Jackson’s sensitive 2015 work of Mahatma Gandhi, the father of Indian independence. He sports his simple cotton ‘dhoti’ and chapels (Indian sandals). This is what Gandhi wore when he visited Buckingham Place in 1931 for tea with King George V and Queen Mary. His every move was followed closely by the press. On leaving the Palace, he was asked if he had felt underdressed. His witty response was: “The king had on enough for both of us.”

Heading west along the river, you pass the glorious former church (now a concert venue) of St John, in Smith Square. Up next is the HQ of M15 – the Security Service whose mission is ‘to keep the country safe’. Over the river is M16 – the Secret Intelligence Service (SIS), where James Bond works.

Eventually you’ll come upon Tate Britain, the home to our national collection of British art. See the building’s classical facade in a whole new light while it remains wrapped in an Indian-inspired confection of neon and LED lights. ‘Remembering a Brave New World’ is the joyfully-riotous creation of artist Chila Kumari Singh Burman. This is the fourth annual winter commission by Tate Britain. It remains on display to the end of January, even while the pandemic forces the Gallery’s continued closure. 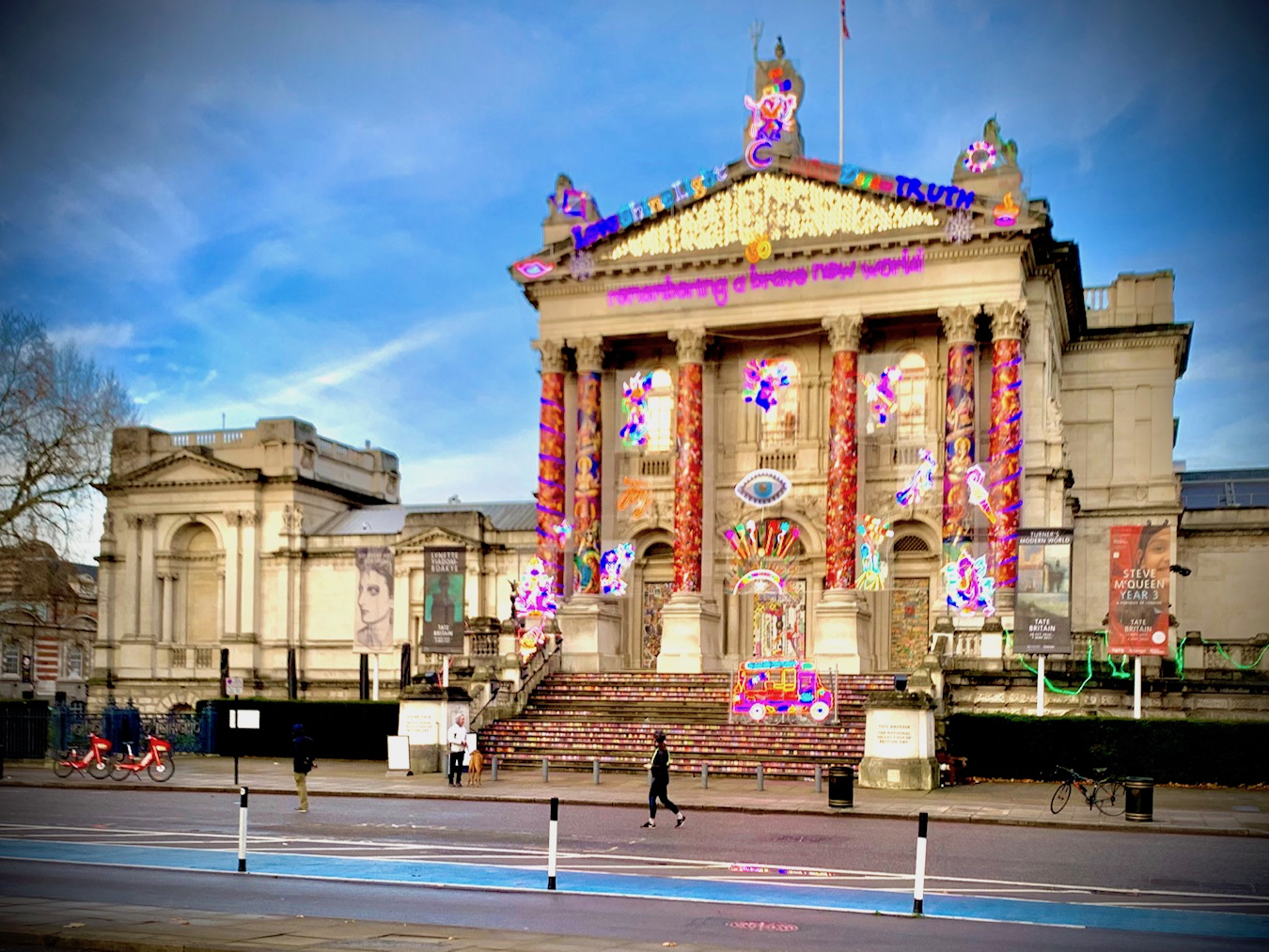 Even in daylight ‘Remembering a Brave New World’ is an impressive sight. @Meetmrlondoner

Burman’s playful response to the Gallery’s ornate facade is a celebration of Diwali, the five-day Hindu Festival of Lights, and an exploration of Asian family life, culture and the struggle for independence.

The work attracts a cheerful night-time crowd of young people. It features Hindu deities among the columns, arches and walls of the 1897 building. We encounter Lakshmi, goddess of wealth and purity; and Ganesh, the god of trade, enterprise and progress. 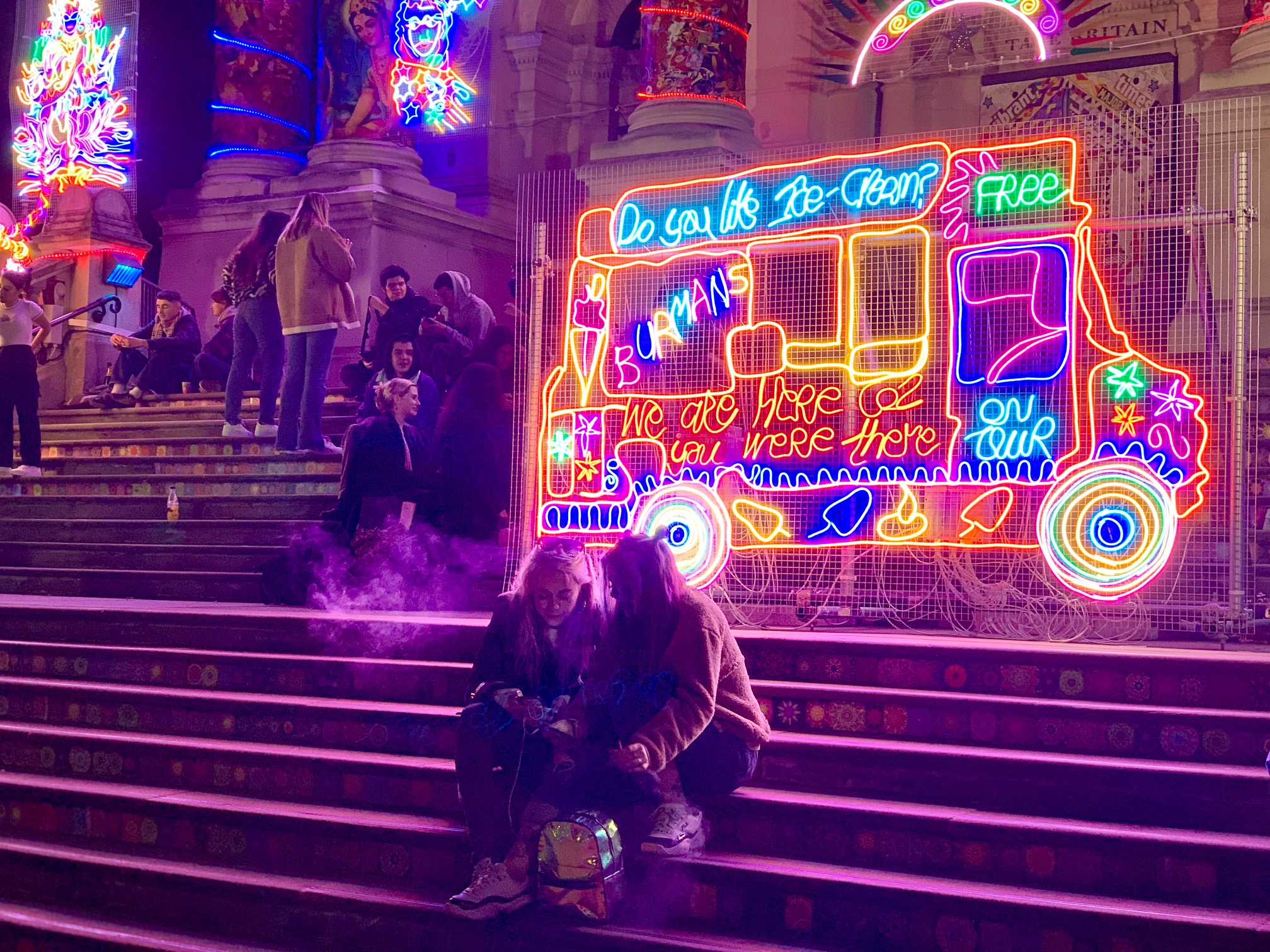 Among the pantheon of gods are some decidedly-secular references, We see giant lips – and an ice cream van in neon – the latter a tribute to the artist’s father, who sold ice cream on Merseyside. There’s a commentary on British imperialism too. Britannia, at the building’s apex, is obscured by the warlike goddess Khali, who represents power and liberation. The freedom fighter Rani of Jhansi fought the British in 1857. He’s in there too. 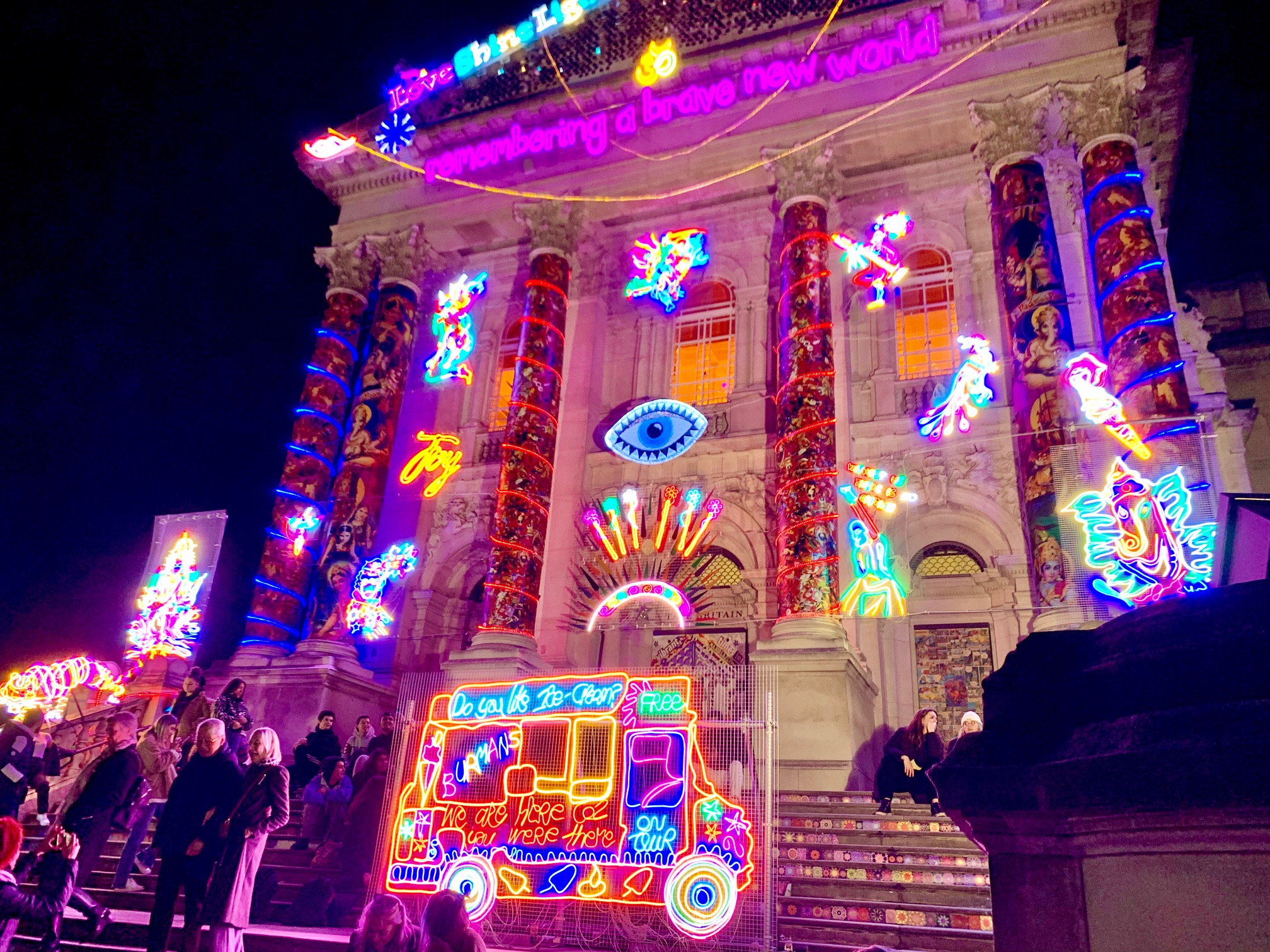 A little further over the water we see the former Battersea Power Station. It was constructed in 1941 by J Theo Halliday and Giles Gilbert Scott in a lavish Art Deco style. The building with its four imposing towers once generated a fifth of London’s electricity. It famously appeared on the cover of Pink Floyd’s 1977 album, Animals. The artwork featured a 30-ft inflatable pig suspended above the building. The pig managed to break loose during the 1976 photo shoot, much to the alarm of airline pilots descending into Heathrow Airport. Today the Grade II-listed building is being re-purposed as luxury homes and offices. Apple’s HQ will be here and the re-development will include luxury bars and restaurants. 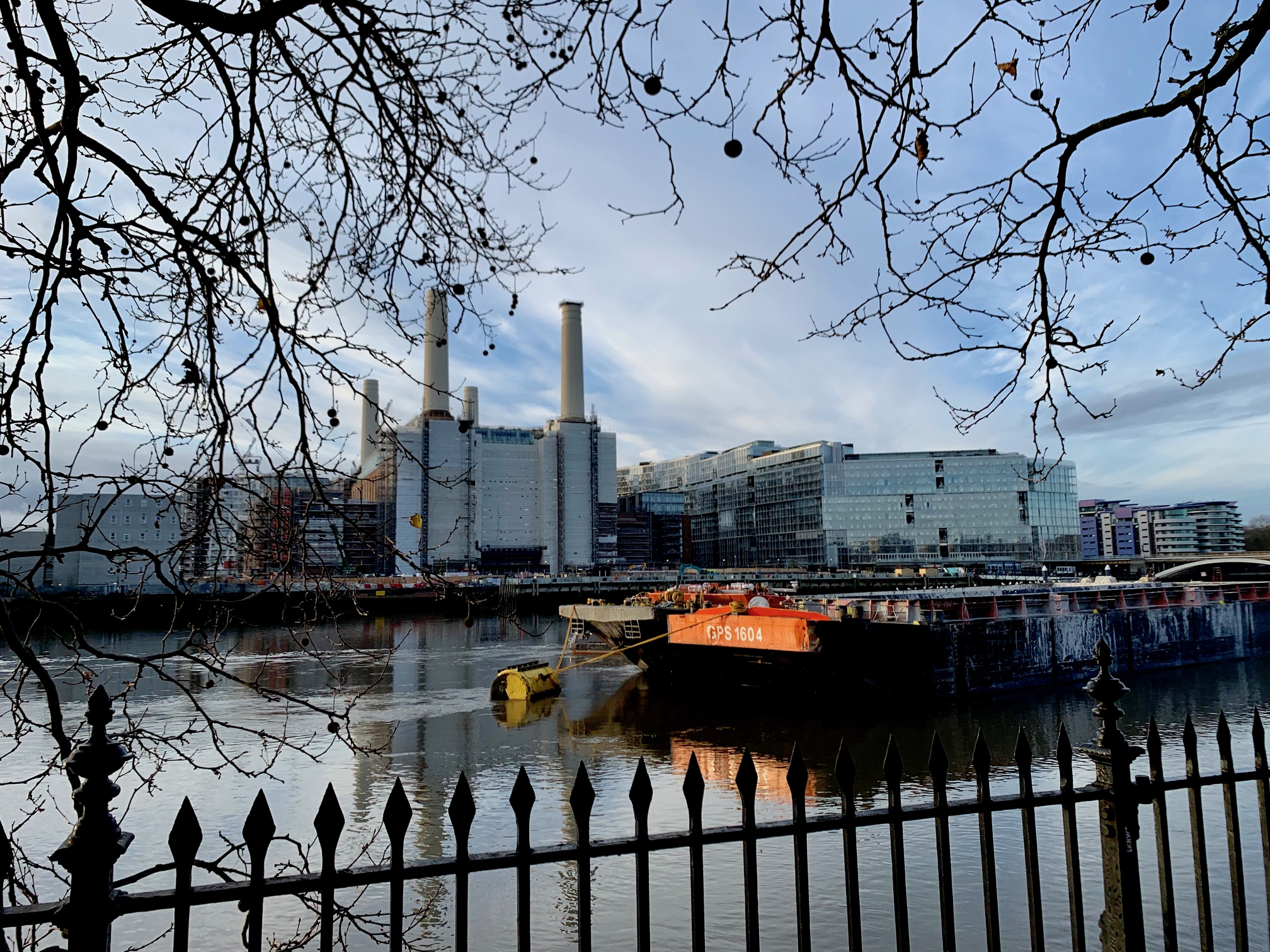 There are great sweeping views of the river here. A hundred years ago the Thames was heavily polluted. Today it teams with wildlife. This includes many types of sea bird and the non-tidal section of the river is home to over 25 species of coarse fish. The entire Thames foreshore is a precious and officially-designated site of special scientific interest. From here we also see barges, tugs and river taxis, clear reminders that the Thames is not only a living river – but a working one too.