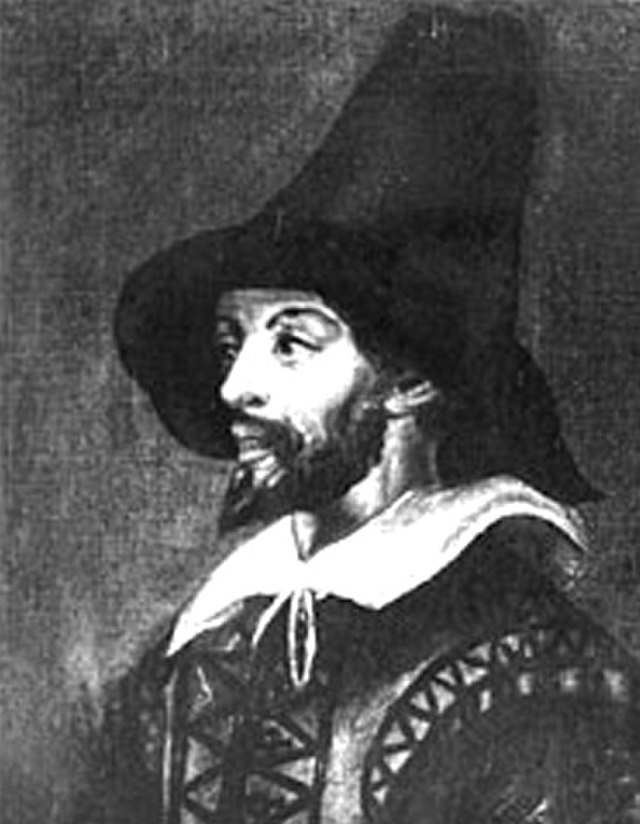 Picture the scene. It’s the night of 4th November 1605. It’s the time of the ‘Little Ice Age’ across England; it is bitterly cold. It’s also the night before the Opening of Parliament, delayed to the 5th because of the deadly Black Plague which raged through London between 1603-1604. These are desperate times.

Tipped off by an anonymous and somewhat cryptic letter sent to William Parker, the 4th Baron Monteagle, on 26 October, King James I orders a search of the Palace of Westminster, headed by the Earl of Suffolk. Not an easy task. The Palace of Westminster is a warren of rooms, interconnected cellars, shops, taverns, wine-merchants, storerooms… In a lantern-lit undercroft, the King’s men came across a servant who went by the name of John Johnson, a tall handsome man, with thick reddish-brown hair and an impressive moustache. He wore a cloak and hat, boots and spurs, as if ready for a quick getaway, which was peculiar. But his general demeanour was “mild and cheerful” and he explains that he was looking after a large pile of firewood. Nothing to see here. The King’s search party leave. 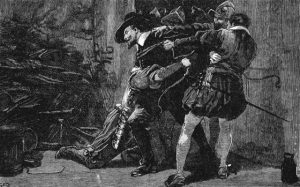 Guy Fawkes is caught in the cellar of the Houses of Parliament with the explosives. Public domain

Within hours, it is discovered that the recently searched undercroft space was rented in March 1605 by one Thomas Percy, a Catholic. These are dark times, a period of political and religious upheaval. One can’t be too careful.  The King orders a second search. Sometime around midnight or perhaps in the early hours of the 5th November, Sir Thomas Knyvett, Keeper of Whitehall Palace, went back to the undercroft and a deeper search beneath the firewood revealed 36 barrels (1 ton) of gunpowder. A struggle ensued, Knyvett takes the lantern from Johnson preventing him from detonating the gunpowder. Johnson is arrested, fuses and a box of matches are found and he is led to the King and his Council. A dangerous and daring Catholic plot, hatched 18 months before, to blow up the King and his parliament was foiled.

The King demanded an explanation. Boldly and without hesitation the 35 year old Johnson replies “I wish to blow the Scottish King and all of his Scottish Lords back to Scotland”. Defiantly he states “A desperate disease requires a dangerous remedy.” With an impressive “Roman resolution” Johnson also expressed his deep regret at having failed.

Johnson is imprisoned in the Tower with Royal instructions on his interrogation ‘If he will not other ways confesse, the gentler tortures are first to be used upon him, and then step by step you may employ the harsher, and so speede youre goode work.’ Chief interrogator is Sir William Waad, Lieutenant of the Tower. Johnson remains silent for 5 long days maintaining a “most stubborn and perverse humour, as dogged as if he were possessed”. On the 7 November he reveals his real name – Guy Fawkes. Manacled and tortured on the rack, Fawkes endures excruciating pain whilst his limbs were pulled until his joints were dislocated and separated. 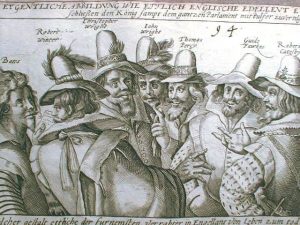 Guy Fawkes (6th from left) and some of the co-conspirators of the Gunpowder Plot. Public domain 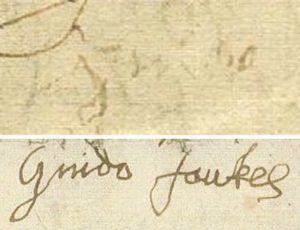 Top: Signature of “Guido” on his confession under torture. Bottom: His signature before torture. Public domain.

Fawkes, Thomas Wintour, Ambrose Rookwood and Robert Keyes  were committed, tried and sentenced of treason. On 31 January 1606, they were brutally dragged behind a horse along the streets of London to Old Palace Yard in Westminster where, one by one, they were hanged, drawn and quartered in front of  a baying crowd. Fawkes was the last to go up the gallows. A bystander commented, “Last of all came the great devil of all, Guy Fawkes, alias Johnson, who should have put fire to the powder. His body being weak with the torture and sickness he was scarce able to go up the ladder, yet with much ado, by the help of the hangman, went high enough to break his neck by the fall. He made no speech, but with his crosses and idle ceremonies made his end upon the gallows and the block, to the great joy of all the beholders that the land was ended of so wicked a villainy.” Although not the plot’s ringleader, Fawkes was, nonetheless, its most infamous conspirator.

What happened to the rest of the conspirators? Francis Tresham died of natural causes in the Tower of London on 23 December 1605.  Four men – Sir Everard Digby, Robert Winter, John Grant and Thomas Bates – were executed on 30 January 1606 in St Paul’s Churchyard. The two ringleaders, Percy and Catesby, had been killed earlier at Holbeach House in Staffordshire. John & Christopher Wright were both shot on the 8th November. None survived.

In January 1606 James I passed a thanksgiving act (Observance of 5 November Act) to legally bind the nation to an annual celebration of the success of the state over Catholic conspirators. The act stated that all “Ministers in every Cathedral and Parish Church, or other usual Place for Common Prayer … shall always upon the fifth Day of November say Morning Prayer, and give unto Almighty God Thanks for this most happy Deliverance”. During the service the minister had to “publickly, distinctly and plainly” read out the text of the act.

Lest the nation should forget, in 1608, Sir William Waad had a marble memorial erected in an upper room of the King’s House at the Tower – a permanent reminder of the gruesome fate that awaits traitors.

The Observance Act remained in force until 1859. It was illegal to not mark Gunpowder Treason Day (or Bonfire Night or Guy Fawkes Night as we now know it) in Britain. The only exception was St Peter’s School in York, Guy Fawkes’s alma mater, which refused to participate in any of the celebrations.  During the two World Wars, Bonfire Night was celebrated indoors in keeping with the wartime requirement for blackouts. To this day, the Yeoman of the Guard check the cellars of the Houses of Parliament before every state opening of parliament. 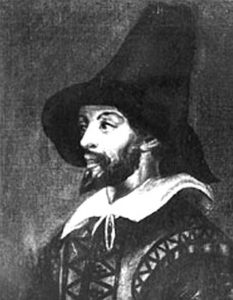 Over 400 years on, the nation still remembers Fawkes’s fiery legacy every 5th November. So today as you head out to one of the many bonfire and fireworks displays across the UK, you might like to ponder how British history may have changed had Fawkes been able to light that fuse on 5th November 1605.

Wishing you all a happy and safe Bonfire Night 2022.