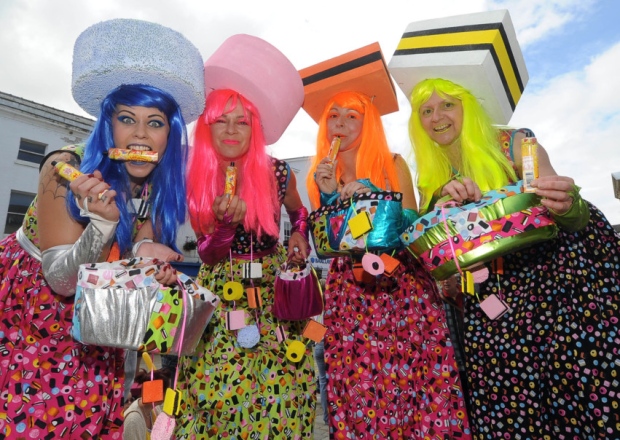 When you hear the Yorkshire town of Pontefract mentioned, what springs to mind? It could be the castle, the races or – for the vast majority of people – Pontefract Cakes, small black medallions of liquorice sweetness. Proud Pomfretian and Yorkshire Blue Badge Guide Rosemary Barnes delves deeper into the subject…

These days we think of liquorice as a treat but originally the woody roots were used in herbal remedies to cure anything from asthma to toothache. Pontefract association with the liquorice industry goes back centuries – the legend is that the crusaders brought back the plant from the Holy Land and it flourished in the rich loamy soil of the area.

But it was not until 1760 that George Dunhill, a Pontefract based chemist, thought of adding sugar to make the liquorice taste sweet. At that time there were 47 separate growing plots or “garths” in the town so plenty of raw material to hand. Following his breakthrough Dunhill set up a factory which is still in operation today (although it is now owned by the German company Haribo).

There were 15 factories producing millions of “Pomfret cakes” in the early 1900s, and the industry became one of the chief employers in the town, particularly for women who were given the glamorous titles of “thumper” or “stripper” depending on the jobs they performed on the production line. The poet John Betjeman even felt inspired to write a poem praising the sweets and the sturdy lasses who made them.

After WWII tastes changed, chocolate becoming the nation’s favourite sweet treat and today there are only 2 factories in town making liquorice confectionery, the other one being Wilkinsons now owned by the Tangerine brand.

But Pontefract’s liquorice link is celebrated every year with a summer festival animating the town centre. In addition to street entertainment you can visit multiple stalls to sample liquorice-flavoured cheese, beer or gateaux. This year the festival will take place on Sunday 9 July. Look out for Lucy Liquorice the Luscious Lady with her entourage of cheerleaders and stilt walkers. Pick up a recipe for making liquorice gingerbread and other specialities enjoyed in Medieval times.

If you’d like to have a Blue Badge experience at the festival, contact Rosemary Barnes who will be on hand to point out sites associated with Pontefract’s liquorice history – did you know that a liquorice hand stamp was used to seal the ballot box used in the first secret elections? Or click here to discover more Yorkshire Blue Badge Guides.