Nestled in a tranquil, wooded setting a couple of miles north of Perth, Scone Palace has played a central part in Scotland’s history.  The home of the Murray family (Earls of Mansfield) for 400 years, the site has been strategically important for 5500 years with evidence of pre-historic burial barrows.  Its location at a junction between the highlands to the north and the fertile Strathmore plain to the east has put it on the path of invading armies for centuries. The Romans marched by here in their attempt to pacify the northern tribes, building a camp nearby, supported from their nearby port at Bertha (Perth). The Picts later established this as the centre of their Kingdom and after they merged with the Scots to form the start of the nation of Scotland we recognise today, Scone become a regional power centre.  It was the symbolic crowning place of as many as 38 Scottish monarchs, after the Stone of Destiny, the Scots’ crowning stone, was transferred from Iona.  As the site of Scotland’s first recorded parliament, it became a centre of law-making, with a bell being rung when a new law was passed.  Scottish folklore records that the law of the land became known as the “Bell of Scone”. 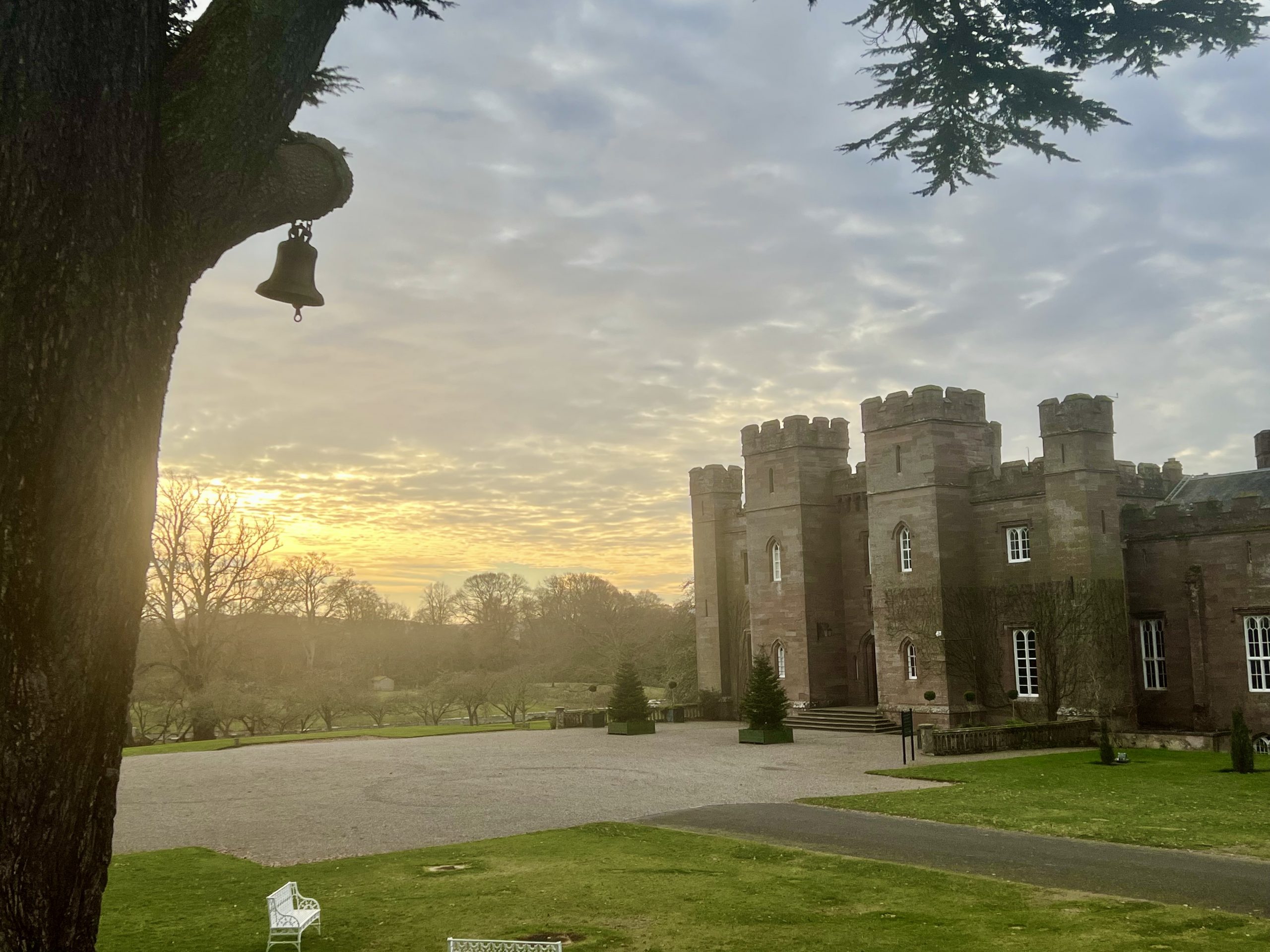 Scone’s exciting history has seen it become a pawn in the kidnap of a King; the location of the theft of one of Scotland’s most iconic symbols; the destruction of an abbey in a frenzy of reformation fervour and the relocation of an entire village to improve the view of the Earl of Mansfield. 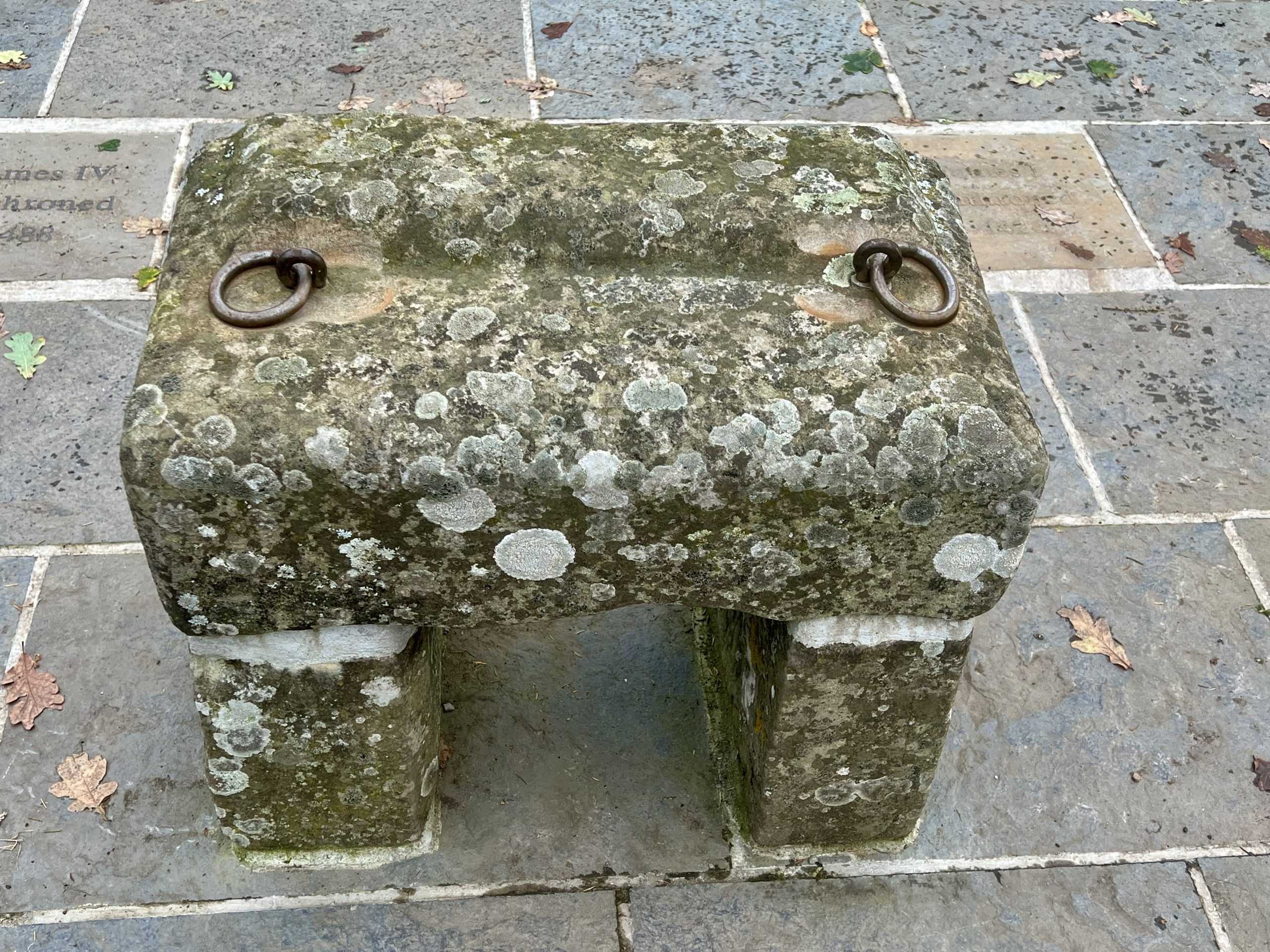 Stone of Destiny – Image by the Kilted Guide

Scone Abbey was the site of the Stone of Destiny, the stone on which all Scottish monarchs sat when they were crowned.  There are many myths about the origin of the stone. Some say that it was the biblical Jacob’s pillow, against which he rested his head whilst dreaming of a ladder to Heaven; others believe it was previously the crowning stone of Irish Kings, who brought it to Iona as part of the Gaelic kingdom of Dal Riata.

During the Wars of Independence, King Edward I, who recognised the symbolic importance of the stone, had his army seize it and take it to London in 1296.  Doubts as to whether he retrieved the true stone, however, have existed for centuries, with a suggestion that the wily monks of Scone hid the true stone on Edward’s approach, substituting it with a fake. Two years after removing the stone, his army returned and ransacked the palace, apparently searching for something.  Was it the real stone?  Judge for yourself.  Credence is lent to this legend by the fact that geologists have identified that the current stone is made of a red sandstone local to the Scone area. The stone that was taken was removed to Westminster and has been used at every London coronation for 700 years.  It finally returned to Scotland in 1996, and has been housed in Edinburgh Castle, although it is due to return to a new purpose designed museum in Perth, close to its ancient home.

Scone Abbey, where the Stone of Destiny was kept, was the target of Reformation mobs in 1559. Inspired by the fiery rhetoric of John Knox, the great religious reformer, churches and abbeys were ransacked by zealous mobs determined to remove all signs of idolatory.  There was a frenzy of destruction which resulted in 95% of all Scotland’s stained glass windows, statuary and paintings being removed.  Scone became a target after Knox preached a sermon in the nearby St Johns Kirk in Perth. Although Knox intervened to prevent local Perth men damaging the abbey after his sermon, a “rascally multitude from Dundee” arrived the following day, burning the abbey to the ground. A small church replaced the abbey, however all that now remains is the Stormont Mausoleum, in which members of the Murray family are interred. 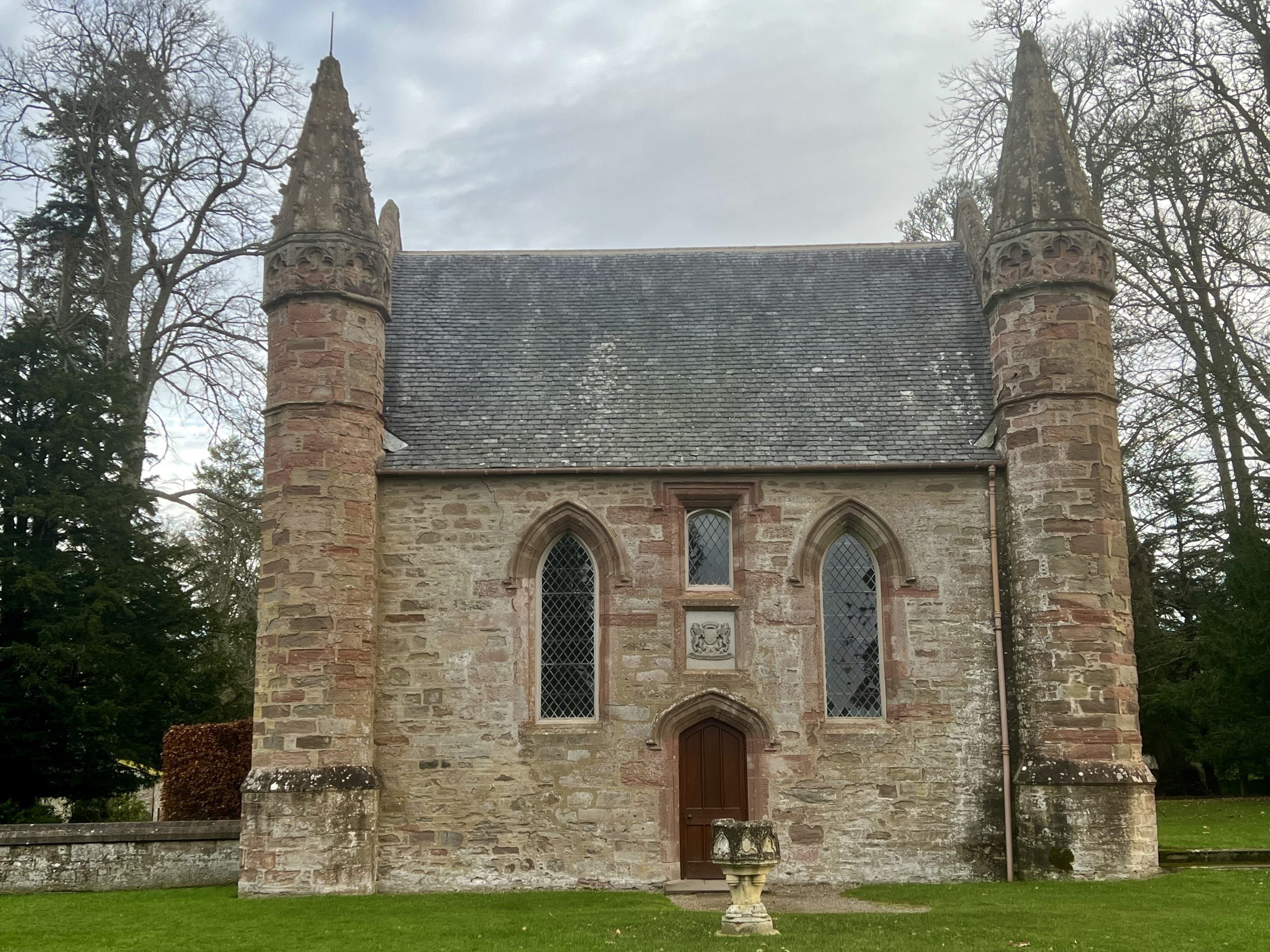 The estate passed to the Murray family in 1600 after a rather dubious incident whereby King James VI and I was allegedly kidnapped by the Ruthven family.  The Ruthvens were a very powerful local family, who were owed a vast sum of money by the King.  They had previously been involved in a kidnap of the young king in an incident knows as the Ruthven Raid. The king was held for a year before being released. On this occasion he was surprisingly generous, pardoning his captors.

18 years later there was an alleged second kidnap by the same family! On this occasion, King James VI and I claimed to have been lured to the Perth home of the Ruthvens and secured before being rescued by supporters.  If indeed there was a second kidnap, then the Ruthvens were astoundingly incompetent.  No real motive for their actions has been proposed, nevertheless the king on this occasion was ruthless. The Ruthvens lost all their lands, and their very name was banned, which luckily for the king saw the cancellation of the huge debt he owed.  Lord Stormont, who had been involved in narrating the details of the plot was rewarded with the gift of the Ruthven’s Scone estate. 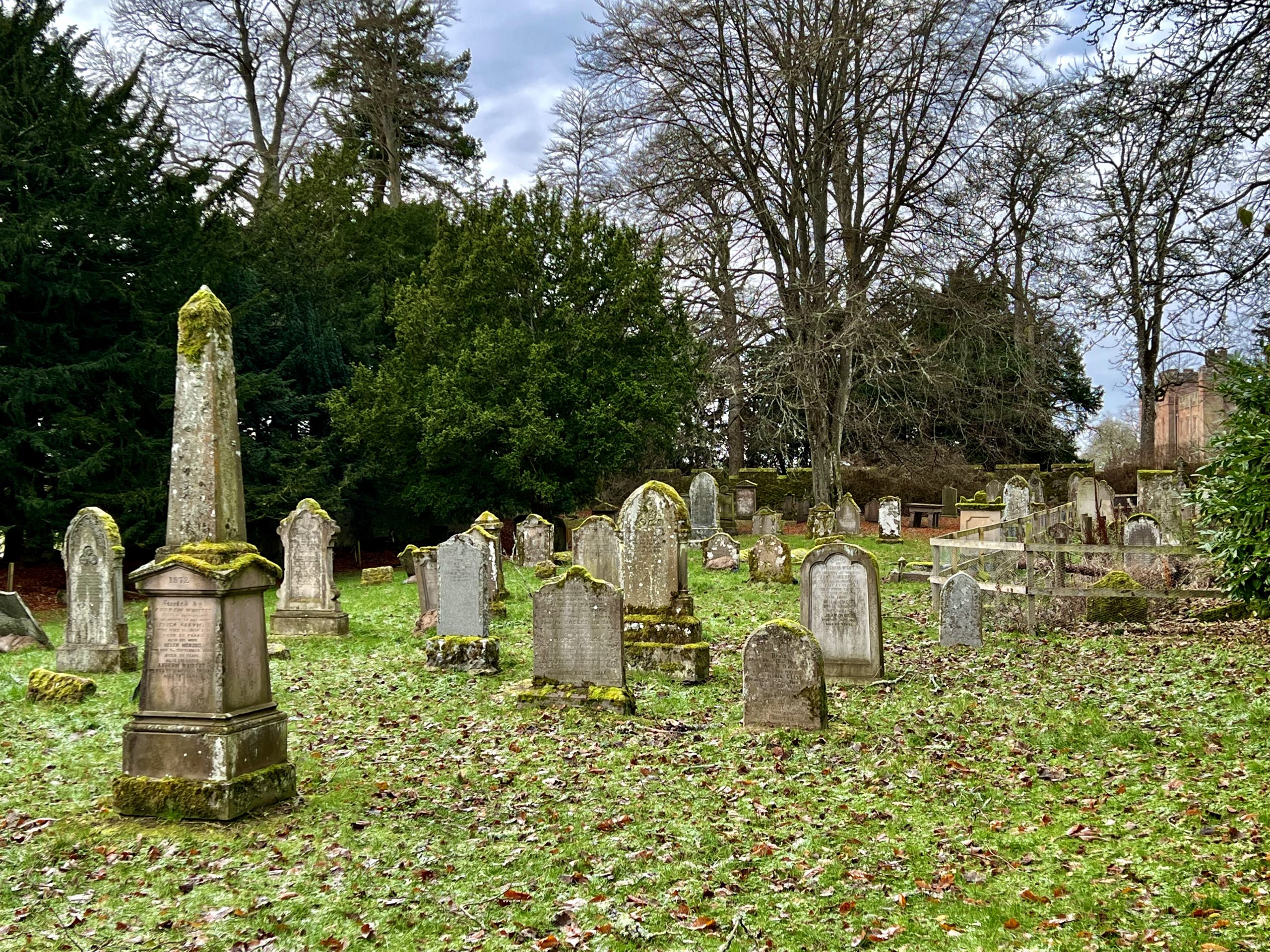 Opposite the palace is a graveyard, which contains more stones that you would expect if it was just catering for estate staff.  That is because it pre-dates the current palace, which was remodelled in 1803 by the 3rd Earl of Mansfield, creating one of Britain’s finest Georgian Gothic houses.  Wanting to ensure that his view wasn’t interrupted, the village of Scone and its 1400 unfortunate inhabitants were relocated two miles away over a hill and out of sight.  The town was cleared whilst the church was dismantled and its stone used to rebuild it in its new location. All that remains of the old village today are the mercat (market) cross, and the village graveyard. 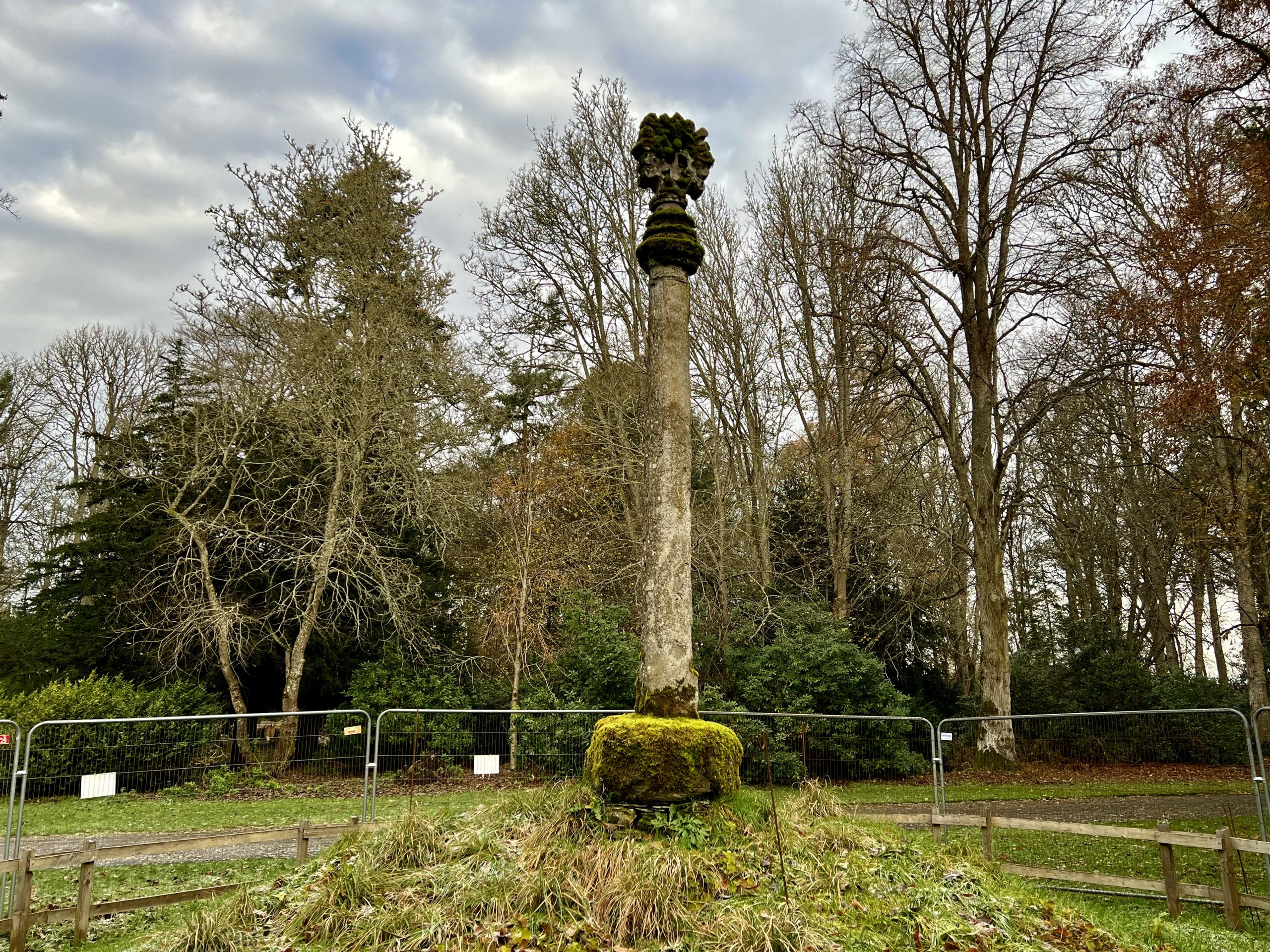 Internally, the palace is beautifully furnished with many unique pieces.  The dining room is still set for Queen Victoria’s visit in 1842, with Chippendale style chairs. 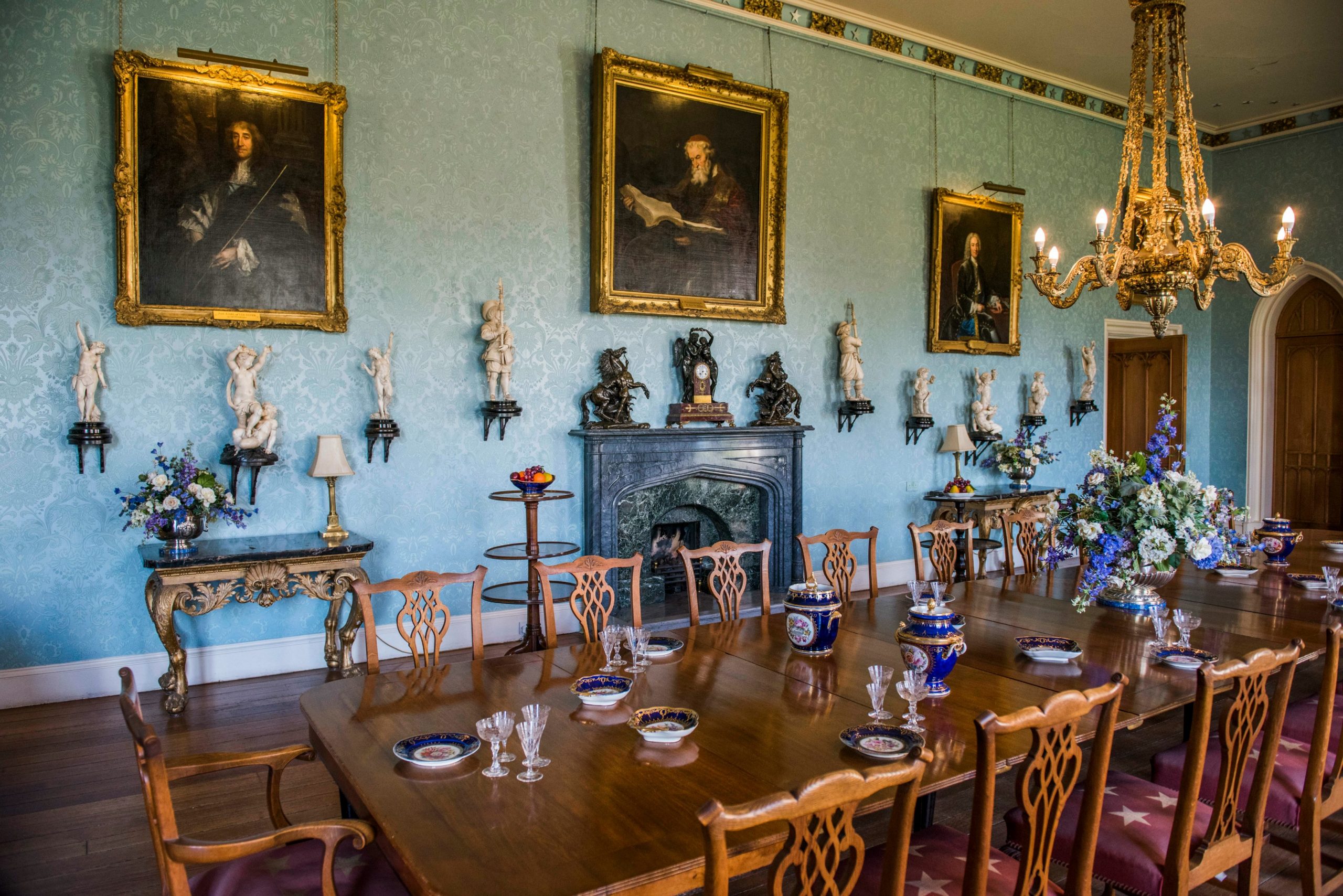 The drawing room has a number of pieces dating to the period when the second earl was ambassador to the courts of Vienna and Paris in the late 18th century. He taught Louis XVI and Marie Antoinette Scottish dancing, and in return received gifts including boulework furniture and a writing desk from the Queen, whilst The library has an incredible collection of porcelain, including pieces from Meissen, Sevres and Worcester. 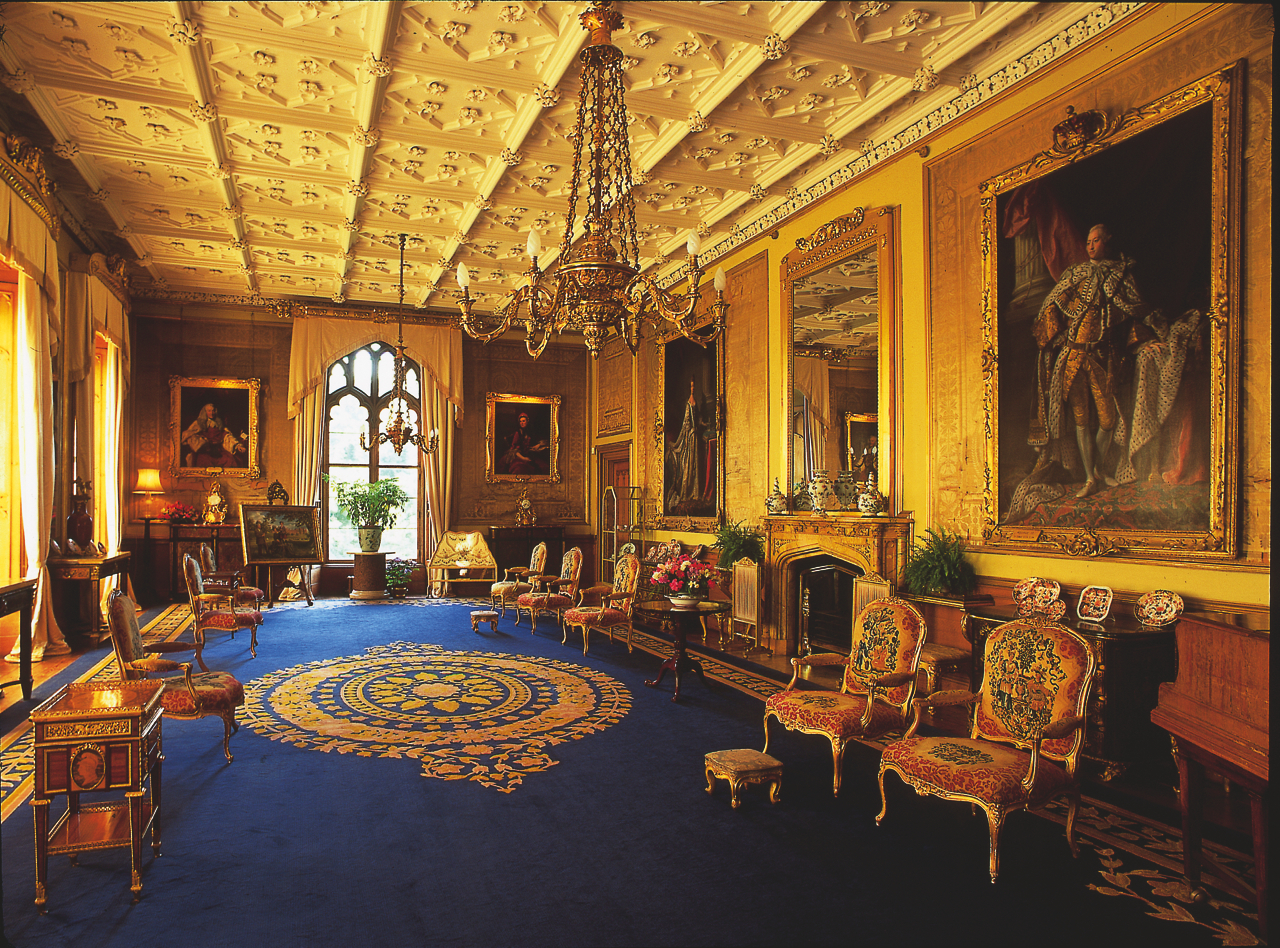 The Long Gallery is a remnant of the previous house, and is the longest room of any house in Scotland. Monarchs ranging from James VI and I to Queen Victoria have walked through it, and indeed the 4th Earl demonstrated the sport of curling to Prince Albert on the 500 year old, highly polished oak floor. 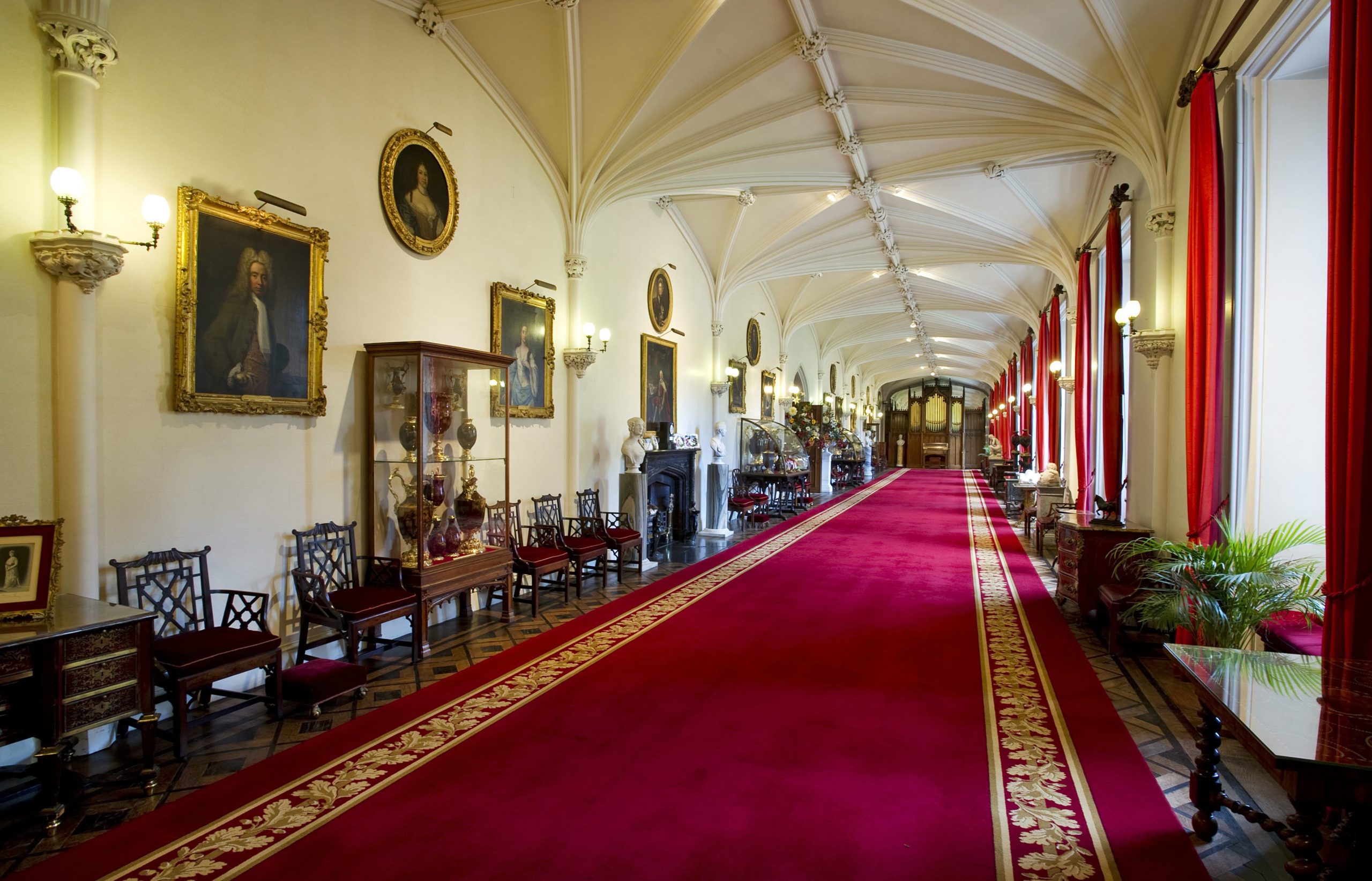 The gardens of Scone Palace are worth a visit in themselves. The great botanist, David Douglas, was an apprentice gardener at  Scone before heading to the New World and returning with samples of exciting new plants.  The Douglas Fir is named for him, and the oldest example in the UK is in the grounds of the Palace where an unusually bent bough has provided a resting place and photo opportunity for visitors for 200 years!  The Murray Star Maze is another popular attraction. Planted with 2000 beech trees, their red and green variegation represents the colours of the Murry tartan, whilst its shape, a five-pointed star, is part of the Murray family emblem. 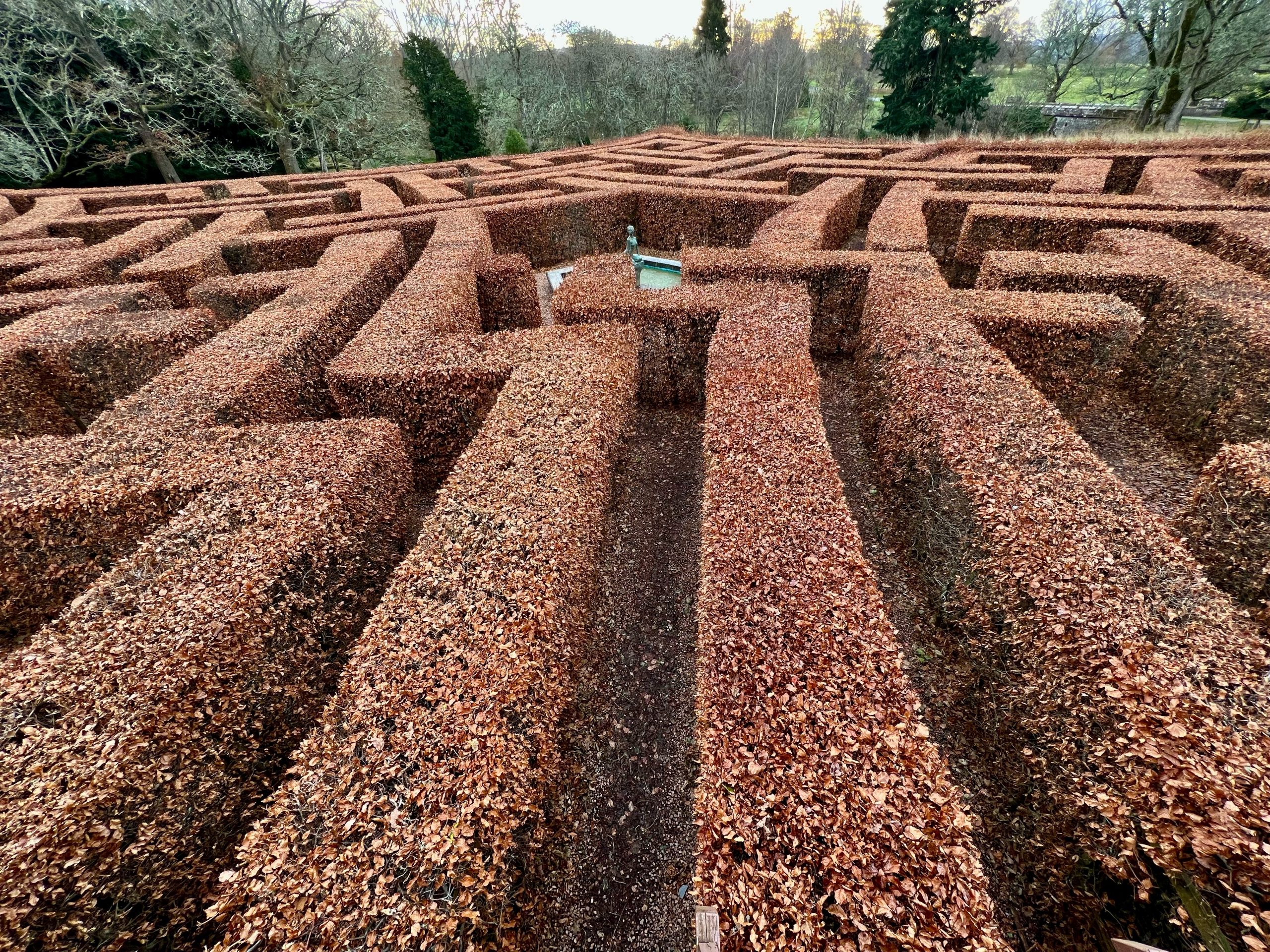 The Murray Star Maze – Image by the Kilted Guide

Scone is a wonderful jumping off point for Perthshire, one of Scotland’s most beautiful counties. It’s long history at the centre of Scottish power has generated a wealth of stories, so step through the gates and start to explore this area with a blue badge guide to ensure that you discover all its secrets! 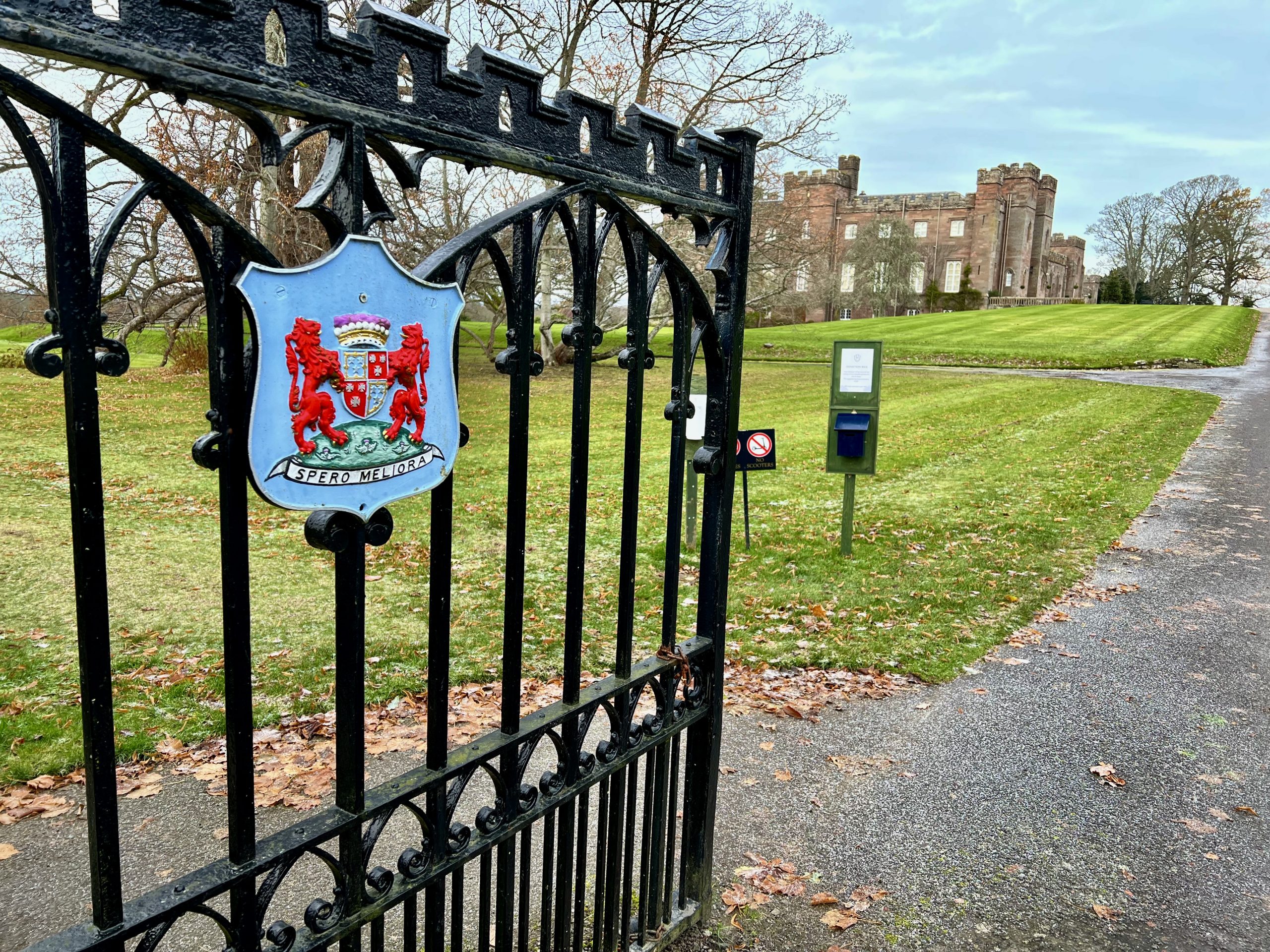 Gates – Image by the Kilted Guide 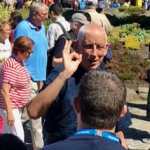 Jim Leslie is a Scottish Blue Badge tourist guide operating as The Kilted Guide since qualifying in 2018.  He provides a range of tours including driver guiding and walking tours and has a wide range of interests. Before becoming a guide, Jim served 30 years as a police officer. You can find more about Jim on his Guild profile or on his website.