I live in leafy suburban Sydenham in south east London about eight miles from the centre of town. The Covid-19 pandemic has really brought our street community together. I have guided some of my neighbours around Central London and around Royal Greenwich which is only about five miles away further east. It was so lovely to do some guiding again so I thank them for the opportunity.

So how can Central London be a part of Sydenham I hear you ask!  Well at the end of November, Sally, my neighbour suggested we participate in something I hadn’t previously heard of: Winter Window Wanderland. This is a wonderful way to encourage families to leave the i-pads and laptops and get some fresh air by following a trail and wandering around the local streets. The aim is to spot people’s art works created on windows. They are best seen at night with the light shining through a whole host of colourful creations.

I was inspired!  As a Blue Badge Guide, I had missed the famous parts of London so much I decided to bring my beloved iconic buildings to my street using good old-fashioned black card, multi-coloured tissue paper and glue. I felt eight years old again!

The sights I created are definitely not to scale and not exactly in the order you find them if you travel west to east along the River Thames, which is in the lower windows by the way with most of the famous bridges accounted for.  Can you spot which the buildings are?  I will forgive you if you can’t name the angel figure in the central window. This is the Spirit of Christmas which hangs over Regent Street as part of the Christmas lights celebrations. I also have to beg forgiveness from the great architect Sir Christopher Wren. He would not be pleased with the lack of height on my dome over his famous St Paul’s cathedral. This shows my strength lies in my tourist guiding, not my design or card cutting!

If you ever find yourself in Sydenham looking at windows or otherwise, let me introduce you to my manor!

Sydenham is probably most famous for being the second home of the huge glass and iron structure, the Crystal Palace. It was relocated in 1852 from its original Hyde Park site following the Great Exhibition the year before. And yes the Premier League football team, Crystal Palace, also resides here and yes it takes its name from the great building which unfortunately burnt down in 1936. 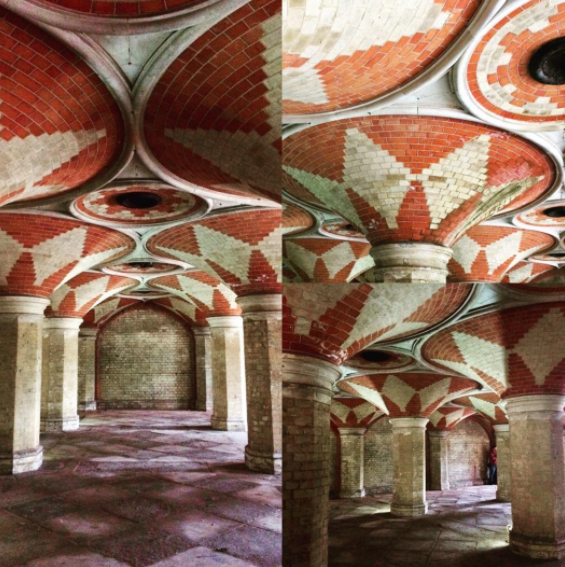 Two train stations were built especially for the new home of this wonder of Victorian engineering. One, Crystal Palace, is still very much in use. The other one, known as Crystal Palace High Level, is only open for the special Open House event in September when many buildings around London that are normally closed to the public open their doors to us. Only the subway remains from the original station, but it is a sight of architectural beauty and the red and cream brick designs make it look more like something from Moorish Spain. It is very much one of London’s hidden gems.

You will also find a painting depicting a local road by Impressionist painter Camille Pissarro in the National Gallery. This is ‘The Avenue, Sydenham’ painted by Pisarro when he lived nearby in Norwood in the 1870s. He loved the atmosphere of an early spring day and below you can see a copy of his painting and also my modern photo. You can see some of the same trees against a blue sky with the same church in the background, although I don’t doubt Pisarro would be shocked to see those cars on his road today! 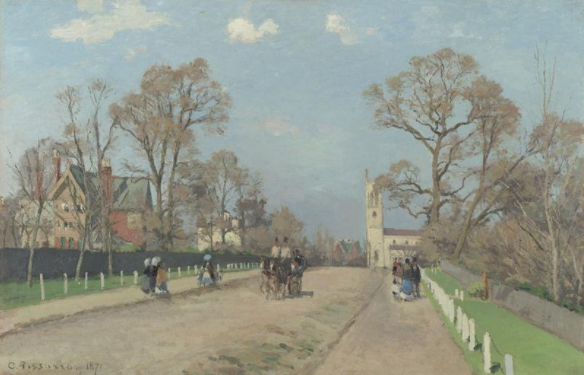 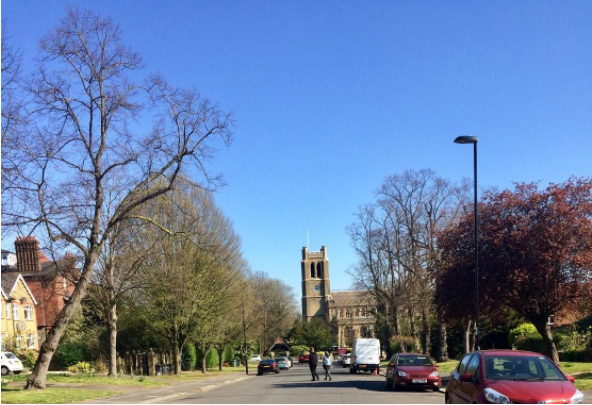 We have our share of famous names with blue plaques in Sydenham too. Blue Plaques are found on buildings across London usually denoting the home or working place of a well-known person in London’s history. The Antarctic explorer Sir Ernest Shackleton lived in a house just next door to the church in the Pisarro painting. 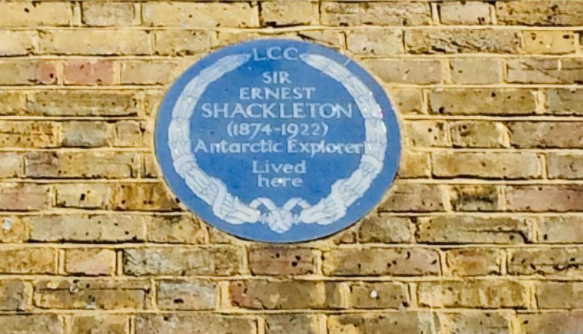 If you walk around the corner you will find the home of Eleanor Marx. She was the daughter of Karl Marx, campaigner and writer in her own right and lived and died in a house on Jews Walk. 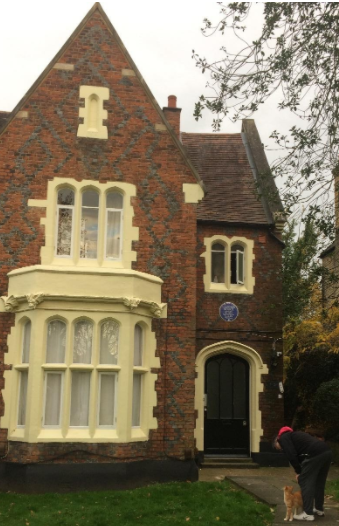 I will be offering local tours in 2021, so get in touch and I will tell you more about my corner of south-east London! Or we can find the real iconic central London sites in my window if you prefer!

Sue Hyde always wanted to work as a tour guide, and before becoming a Blue Badge Tourist Guide she studied Spanish and Arabic at the university and worked teaching English as a foreign language in Turkey and Bangladesh. She worked in international sales for 20 years and now does what she loves most: guiding people from all around the world in London and beyond. You can find her tours on her website Sue Hyde The Guide or contact her directly on the email suehydetheguide@btinternet.com.