“Why, Sir, you find no man, at all intellectual, who is willing to leave London. No, Sir, when a man is tired of London, he is tired of life; for there is in London all that life can afford.” Samuel Johnson

Hidden amongst the modern city are clues that tell us what has gone before; these are the hidden gems. We take a look at Walbrook, a tiny street in the City of London, with Blue Badge Guide Linda Hamer.

Walbrook
The street is named after the long-lost river Walbrook, which at one time flowed from the north of the City, underneath the present site of the Bank of England, before discharging into the River Thames. The name is thought to have come from the fact that the river, or brook, ran through the London Wall that was built by the Romans. The stream was covered over centuries ago but still exists as part of the sewerage system.

The story of London began soon after the Roman invasion nearly 2,000-years ago. The Romans built their settlement around the stream, which provided a supply of freshwater and carried their waste to the tidal Thames. They built many major structures, including temples, a fort, a basilica and an amphitheatre. They called it Londinium. 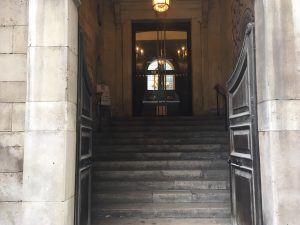 The entrance to St Stephen Walbrook

On the east side of the street is St Stephen Walbrook, the parish church named after the river; one of the fifty or so churches built by the great architect Sir Christopher Wren after the Great Fire of 1666. The entranceway into the church is twelve steps up from the street, reflecting the position of the earlier church on the river bank. 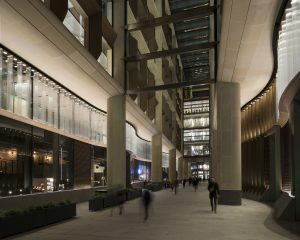 Just opposite the church is one of the newest buildings in the City, Bloomberg’s new European headquarters; home to its 4,000 London based employees. Completed in 2017, it is one of the most sustainable office buildings in the world. It has an on-site water treatment plant that enables rainwater collected from the roof and grey water from the sinks, to be used to flush the toilets, saving 25 million litres of water a year.

Built on a site of just over 3-acres, it comprises two buildings that span a pedestrian arcade, lined with cafes and restaurants. This arcade reinstates Watling Street, a Roman road that originally ran through the site. 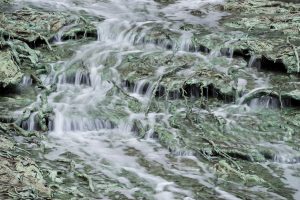 The Temple of Mithras 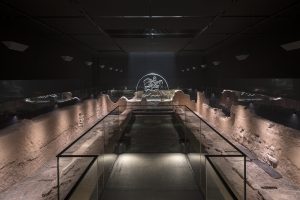 But what is most remarkable, is that beneath the building, seven metres below modern street level is the remains of a temple dedicated to the Roman god Mithras, that was built around AD 240 on the bank of the Walbrook. Mithraism was one of a number of Roman cults, a mystery pagan religion originating in Persia, that flourished throughout the Roman Empire in the 2nd and 3rd centuries, but dwindled in the 4th century when Christianity became widely adopted. By the 5th century AD, the temple, like Londinium, was abandoned.

The temple was found buried under layers of soil and debris in 1954, during the excavation of a Second World War bomb site and reassembled along the street to the west. It has now been reinstated to the site of its discovery. It is one of London’s most important archaeological discoveries. You can visit the reconstructed remains of the Temple of Mithras at London Mithraeum Bloomberg Space.

Linda Hamer is a Blue Badge Guide and a Londoner born and bred.