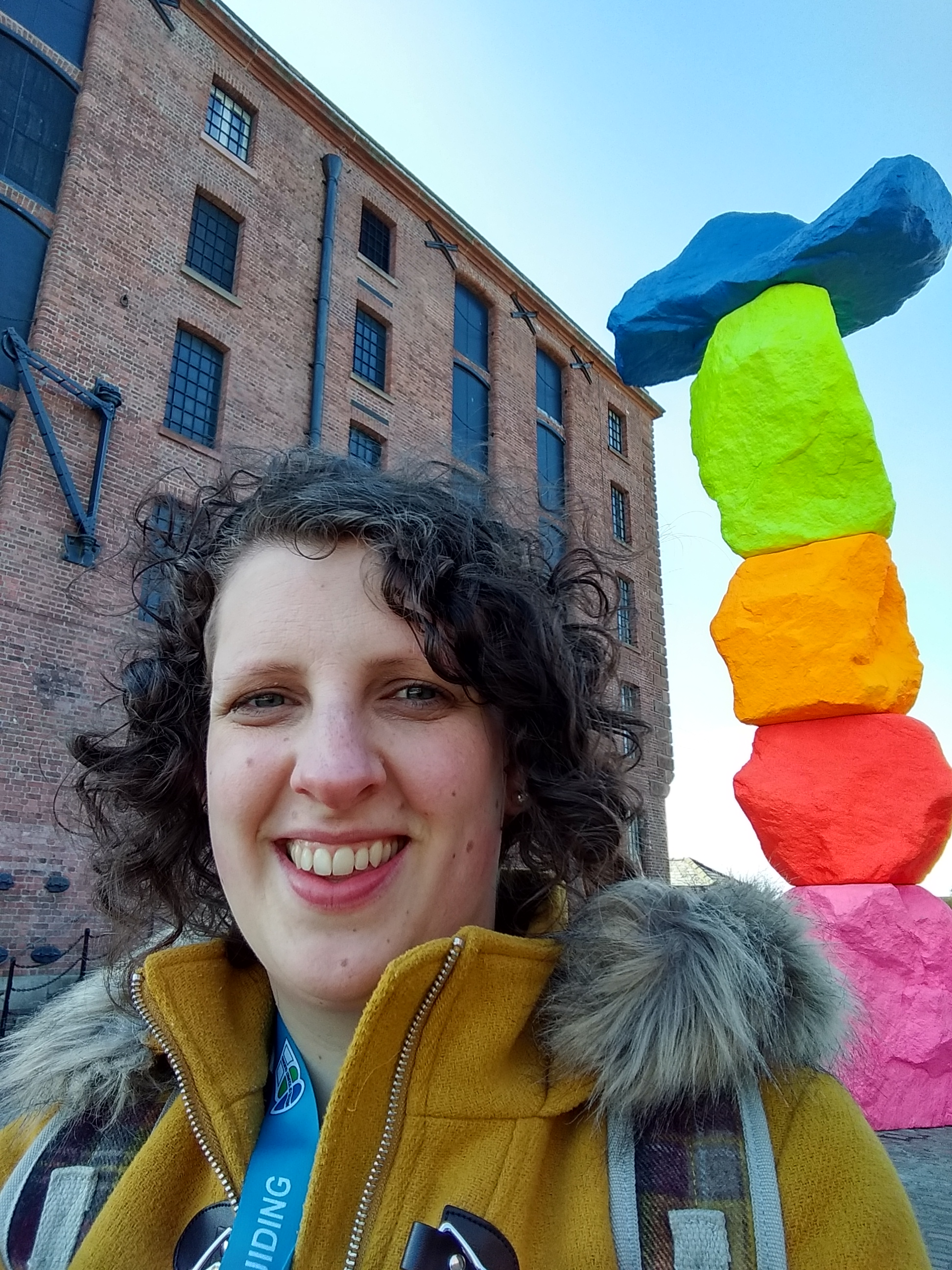 Liverpool has a new mountain, and it’s not a natural peak or landform but a man-made tower of eye-popping, colourful, rocks. Local Blue Badge Guide Harriet Gilmour takes a closer look at Ugo Rondinone’s addition to Liverpool Waterfront at the Royal Albert Dock.

“Ugo Rondinone (pronounced Ron-di-no-nay) is a Swiss artist who lives and creates in New York. ‘Liverpool Mountain’ is Ugo Rondinone’s first public artwork in the UK and part of his Magic Mountains series, with similar outdoor sculptures in Miami and Las Vegas. His ‘Seven Magic Mountains’ work has become a real Instagram hotspot with over 2 million people taking selfies and snaps of the sculptures, and that is despite it being in the middle of the Nevada desert!

Rondinone’s Liverpool piece is a stack of five luminous boulders, like a modern totem pole, rising to 10 metres high. It looks quite gravity-defying with its top rock seemingly perched tentatively on its side. 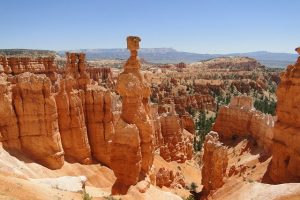 The shape is inspired by natural rock formations called Hoodoos. Also known as ‘fairy chimneys’ these eroded stone structures are common to the Western United States in places such as Utah’s national parks. The Magic Mountain series might be described as Land Art but in contrast to the land art movement in the 1970s which sought to camouflage sculptures into the natural landscape, this screams hello from a distance. Apparently, the artist found Liverpool to be very grey and said it needed some aggressive colours! He has certainly provided them.

The only thing that is camouflaged is that it does indeed use a natural material, you might be fooled into thinking it’s polystyrene under the bright colours but touch it and you will find it is solid rock Liverpool Mountain marks the 10th anniversary of the year that Liverpool was European Capital of Culture, the 20th anniversary of Liverpool Biennial and the 30th anniversary of Tate Liverpool.

It’s a fun new addition and contrast to the industrial heritage buildings of Royal Albert Dock and certainly noticeable. Its playfulness makes you smile. As one fan said of the Nevada statues… “We spend so much money trying to be happy, and who knew a bunch of colourful rocks could make people so happy?” 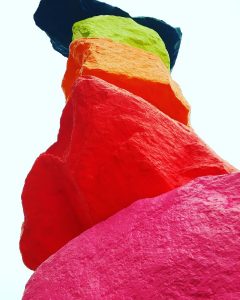 Great Art to see in Liverpool this Summer
The great news is Liverpool Mountain is a permanent commission so you can visit any time …but why delay? If you’re in Liverpool this
summer why not check out Tate Liverpool’s Keith Haring Exhibition at the same time right next door to Liverpool Mountain. It’s the first major UK exhibition of the artist and activist who was part of the legendary New York art scene of the 1980s. The exhibition runs from 14 June – 10 November 2019

Also in Liverpool this summer is a stunning exhibition of works by Charles Rennie Mackintosh. It explores the movement which became known as ‘The Glasgow Style’. Some highlights are his beautiful, yet unsuccessful, design entry for Liverpool’s Anglican Cathedral and the Chinese Room from the Ingram Street Tea Rooms. Catch it now or you’ll have to get on a plane to Maryland where it moves onto next. (The exhibition closes on 26th August 2019).”

Harriet Gilmore is a Blue Badge Guide working in Liverpool and the surrounding areas. She has a background of working in museums and galleries.