29 January 2020 marks the 200th anniversary of the death of King George III. He reigned from 1760-1820 and was much loved and respected in both Windsor and Eton. Blue Badge Guide Debbie Keenan gives us a run-through of the things that happened during the reign of this rather misunderstood royal.

Taking Windsor Castle from the ‘dark age’ to the ‘golden age’
Windsor Castle fell into disrepair during the reigns of George I and II as both spent their time in London and this period in the town is often referred to as ‘the dark ages’. 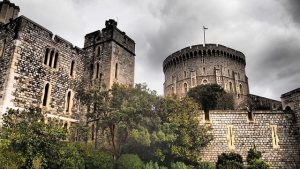 Improvements came about when George III married Princess Charlotte in 1761 who loved Windsor from the moment she first saw it. They moved into the castle with the court in 1778 and the king started immediately to make architectural and internal changes to both the Upper Ward and St George’s Chapel which were in dire need of repair and restoration. This work was continued by his son George IV.

The king’s presence brought back the vitality of the days of King Charles II and brought in a Golden Age like that of the Tudors.

The Squire of Windsor
The town of Windsor benefited with the return of the court and smart shops replaced a lot of the market stalls. The king became a familiar sight on the streets of Windsor and local people called him ‘The Squire of Windsor’. He made sure the streets were properly paved and better lit and under his patronage, trade in the town flourished. Low prices and good quality goods were a result of competition for the king’s favour.

Maria Caley became milliner to both Queen Charlotte and later Queen Victoria. She opened her first shop by the castle ditch in 1813 and was given the Royal Warrant in 1818. The business flourished and she moved her premises to where Caley’s was situated in the High Street in 1823 – the site is now occupied by the MacDonald Hotel which keeps the name Caley’s in their restaurant. 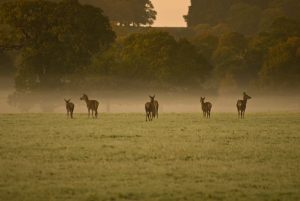 Farmer George
Another nick-name for George III was ‘Farmer George’ because of his great interest in farming and the running of the Great Park. He had parts of the uncultivated areas enclosed for farming in 1791 and two farms were created plus a Royal Dairy. George III rose at 6am and visited his farm workers frequently and always left something for the poorest. He had turned the park from a hunting venue into a profitable agricultural enterprise. He had much in common with Prince Albert, who a generation later, carried on where he left off. Frogmore House was also purchased at this time by the king.

Theatre Royal
The Theatre Royal in Windsor greatly benefited during this time as George III loved the theatre and he went frequently with Queen Charlotte often laughing so heartily “that the walls shook”.

Read all about it
Journalism also flourished in the town with Charles Knight producing the first Windsor and Eton Express in 1812. The king was often found in Knight’s premises on No 2 Castle Hill looking through the books in the back room. He was once found reading (enjoyably?) Thomas Paine’s ‘The Rights of Man’! Knight Junior noted that the king had a remarkable gift for recognising everyone. 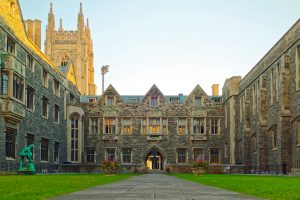 An Etonian at heart
A famous institution across the river loved King George III – Eton College. No monarch showed more interest, nor became more Etonian at heart than George III. He was Eton’s second great royal patron who loved nothing better than to visit and talk to both the masters and boys, many of whom he knew by name. Eton College deeply respected and loved the king whose birthday on 4th of June was made a holiday. To this day it is celebrated as a holiday with ‘Speeches’, cricket and a procession of boats on the river.

Get spooked
The ghostly face of George III has been seen over the years peering out of one of the windows overlooking the North Terrace – one sighting by a Blue Badge Tourist Guide no doubt queuing to get into the State Apartments! So you have been warned ……

Not many people know this but George III is one of only 5 monarchs to have reached a Golden Jubilee – Henry III, Edward III, himself, Queen Victoria and Queen Elizabeth II.

Book a tour of Windor Castle with one of our expert guides.