The extraordinary life of Mary Anning, a 19th century Dorset palaeontologist, is the subject of a long awaited film released this week. ’Ammonite’ stars Kate Winslet and Saoirse Ronan in an intriguing and, perhaps controversial account of this inspirational woman’s life, filmed against the rich visual backdrop of the magnificent Jurassic Coast around Lyme Regis. 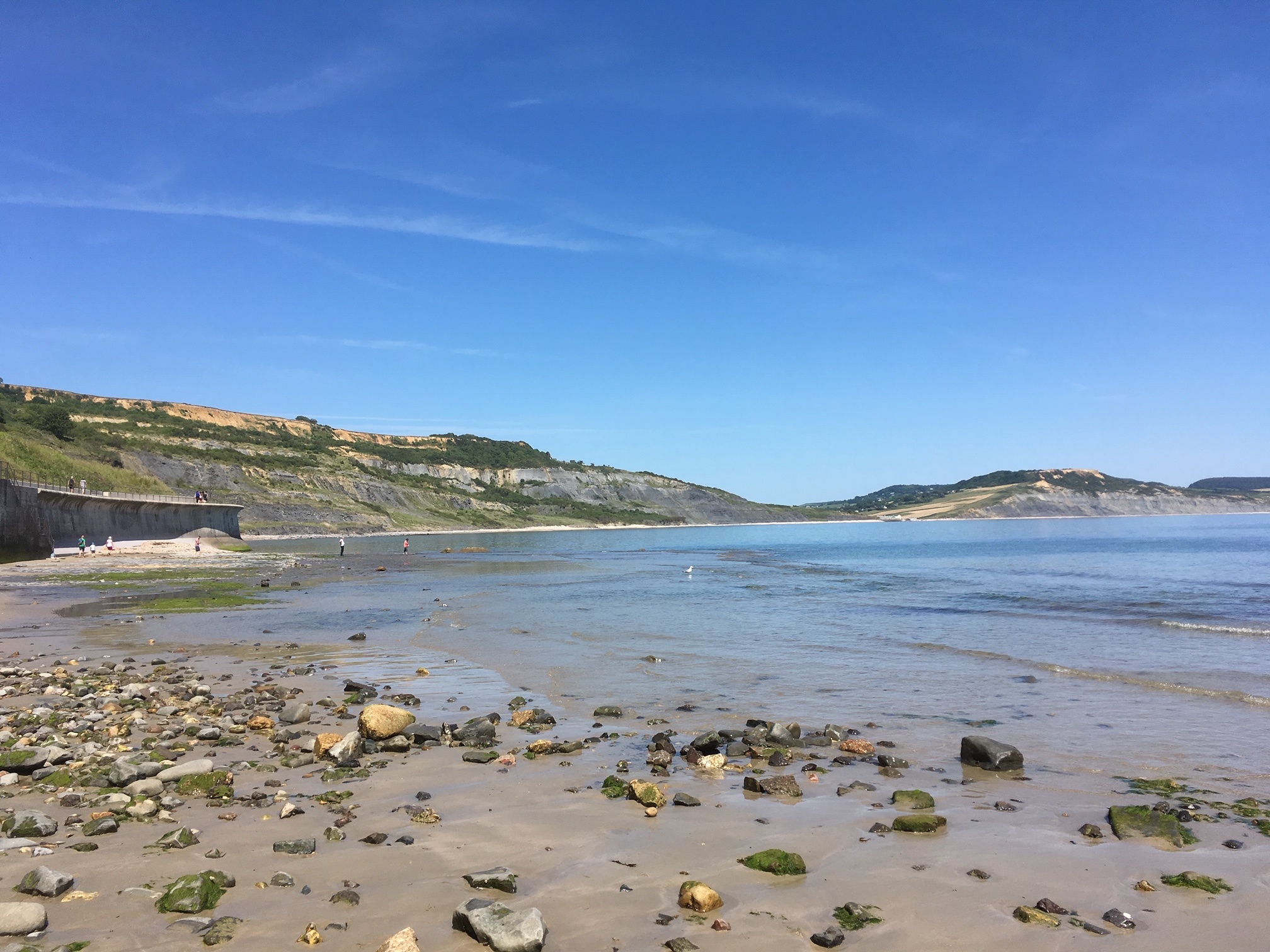 The beautiful view of Lyme Regis. Photo by Julia Morris

Mary was a pioneering palaeontologist working at a time when neither female scientists nor the theory of evolution were thought appropriate or acceptable by Victorian society. Her pioneering discoveries provided evidence key to the establishment of palaeontology: the study of extinct animals and plants that lived long before man. This new science made a significant contribution to the development of radical ideas about evolution, geology and our changing planet.  At a time when women could not study at university, be members of academic societies and were rarely published under their own name Mary was responsible for the discovery of the first examples of a number of key specimens from the Jurassic Period 201-145 million years ago. Whilst she could not join the accepted academic circles and was frequently plagiarised she did gain the recognition of a number of important researchers and informed commentators. 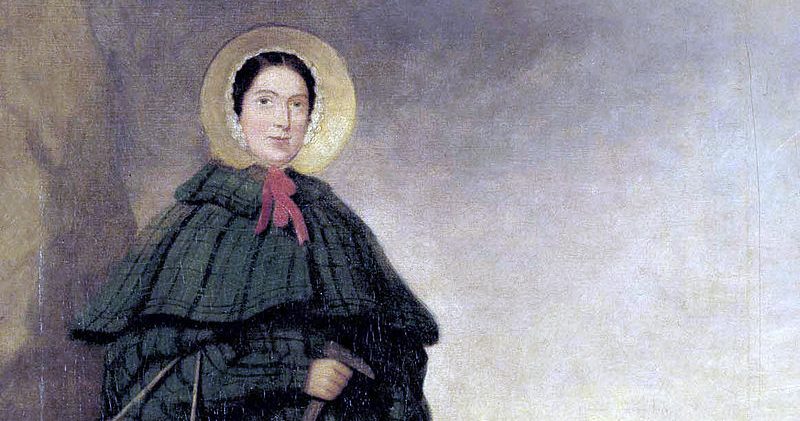 Mary was born in 1799, the daughter of a poor furniture maker who searched out fossils in his spare time.  Lyme in the reign of George III was still a small fishing and trading port but was building a reputation as a fashionable resort for genteel visitors keen to try sea-bathing as an alternative to the spa at Bath.  Jane Austen was amongst them and used Lyme as the location for much of the plot of her last novel, Persuasion. Its picturesque situation on the South coast attracted artists and writers and the evolving coastline brought amateur naturalists eager to find specimens for their collections.

As a baby, Mary became known in the town for surviving a lightning strike that killed the woman holding her but apparently gave her excellent health.  However, her childhood was compromised by poverty and the early death of her father from tuberculosis. He took her fossil hunting on the wide beach between Lyme and Charmouth where the constantly shifting cliffs deposit the remains of ancient creatures whenever a storm brings a new rockfall or landslip. The cliffs around Lyme Regis continue to offer up their rich deposits of fossils because they are so unstable. Black Ven, a giant landslip between Lyme and Charmouth has produced the largest mudslides in Europe.  It is here that Mary found many fossils and lost her little dog Tray to a cliff fall.

The unstable cliffs of Lyme Regis. Image by Julia Morris

In time, Mary and her brother, the only two of the ten Anning children to survive childhood, developed the ability to spot a fossil-bearing rock where others would pass by. These ammonites and belemnites (or Devils’ toenails) were curios that could be sold to visitors who had neither the patience, skill or time to find them for themselves. Mary learned to clean and reconstruct fossils for display and to draw them accurately so that she could identify and compare the detail of specimens with scientific precision. As the child of a non-conformist family, she learned to read at Sunday School but it was through her own efforts in her twenties that she trained herself to read scientific research material in English and French and keep up with the latest findings in her field.

The really significant Jurassic finds began in 1811 when her brother Joseph discovered a large, fossilised animal skull with a huge eye socket. It was Mary, then just 12, who searched out the remainder of the 5-metre long skeleton of this 200 million-year-old creature. The monster initially presumed to be a crocodile was later named an Ichthyosaur or fish-lizard and displayed in the British Museum.  As ‘commercial dealers’, outside the scientific community, the Annings received no recognition of their work in Edward Home’s 1814 paper describing this creature but her discovery of three more in 1821 was praised by the collector George Cumberland in the Bristol Mirror:

“the very finest specimen of a fossil Ichthyosaurus ever found in Europe… we owe entirely to the persevering industry of a young female fossilist, of the name of Anning… and her dangerous employment. To her exertions, we owe nearly all the fine specimens of Ichthyosauri of the great collections…”

In 1823 Mary discovered the complete skeleton of a Plesiosaurus, a huge sea creature with a long neck, tiny head and large paddles. It was presumed a fake until George’s Cuvier, the renowned French palaeontologist declared it authentic in front of a large audience at the Geological Society. Needless to say, as women were not accepted at the Society Mary was not present but her name as a respected collector was established and her reputation brought many new enthusiasts to Lyme. She went on to identify coprolites (fossil poo) that helped establish the diet of these ancient reptiles and even managed to extract usable ink from squid-like creatures called Belemoidea which became fashionable with artists who used it to draw fossils. Although the majority of finds were sea creatures in 1828 she found the first flying reptile or Pterosaur to be found outside Germany, an ancestor of modern birds. Although she never published in her own right she was frequently visited and built working friendships with many of the eminent natural scientists of the day.  Mary’s indefatigable spirit, her persistence meant she continued her daily research and exploration, clambering over the rocks and pools even when she developed breast cancer. Although the Geological Society helped fund her treatment she died aged just 47 in 1847.

In recent years there has been renewed interest in Mary’s story. The designation of the Jurassic Coast as Britain’s first natural world heritage site in 2001 has brought many visitors to explore its landscapes, stories and fossils. It is still possible to explore the length of the beach between Lyme and Charmouth just as Mary did. For new fossil hunters, the hands-on activities Charmouth Heritage Centre are an excellent introduction to enjoying this area safely. Qualified guides will work with the tide timetable and show visitors where and how to find fossils along the water’s edge away from the cliffs.  Here the sea acts like a sieve sorting ammonites, belemnites from the mud and shingle.

Exploring the sea cut platforms nearer the Lyme sea defences is also fascinating for searchers of all ages.  Wide plates of different rock types sit heavily upon one another representing millions of years of deposits.  In places the outline of embedded ammonites are visibly etched into the rocks and mini rock pools provide hours of distraction searching for tiny shrimps or the colourful seaweeds stranded until the sea returns. A human presence is very evident in the flotsam and jetsam that mixes with the debris of the cliffs.   Artists love to collect coloured bottle glass, its edges softened by the action of the sea and pebbles whilst others wonder at the ironwork, once part of defences destroyed by the relentless power of the sea or used on board fishing boats that have long since rotted away. 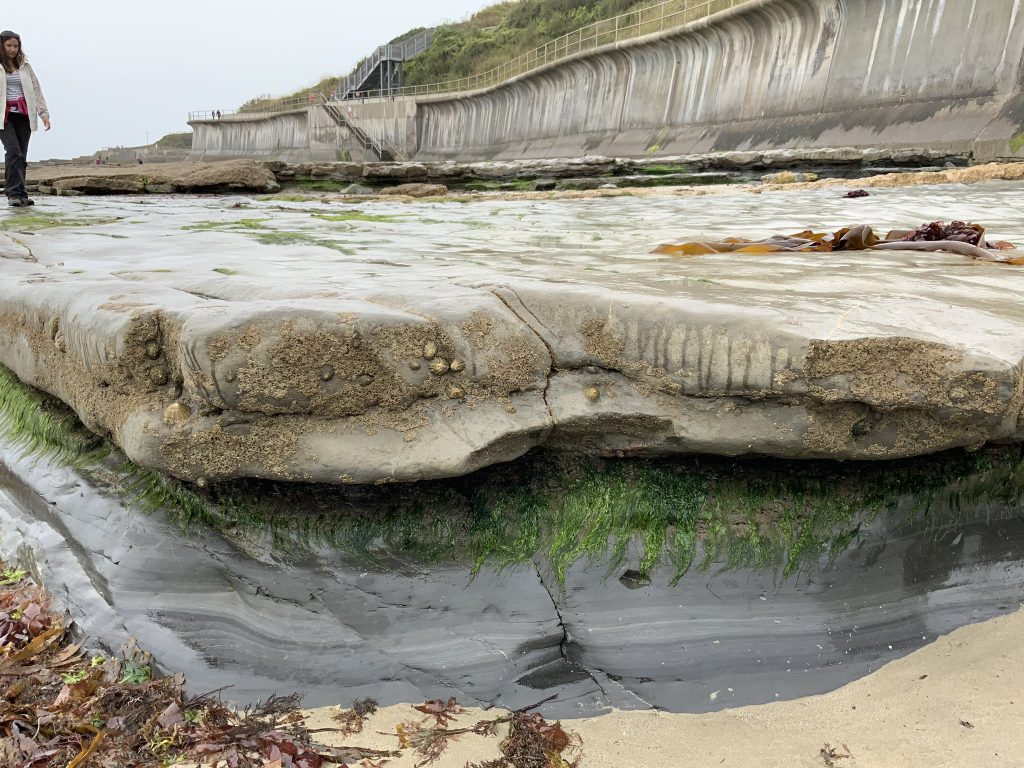 In this image, you can see the impact of the sea on the coast, as well as the huge coastal protection, reinforced since 1990, that works to restrain the inevitable march of this part of the coast into the sea. Photo by Julia Morris.

In Lyme itself, there is much more to discover.  The museum was built by the Philpot family on the site of Mary Anning’s shop and home. It has a superb fossil collection and a wing dedicated to her by name.  Nearby a Fossil Shop still offers visitors finds to fill the gaps in their collections or a souvenir of their time on the Jurassic Coast. 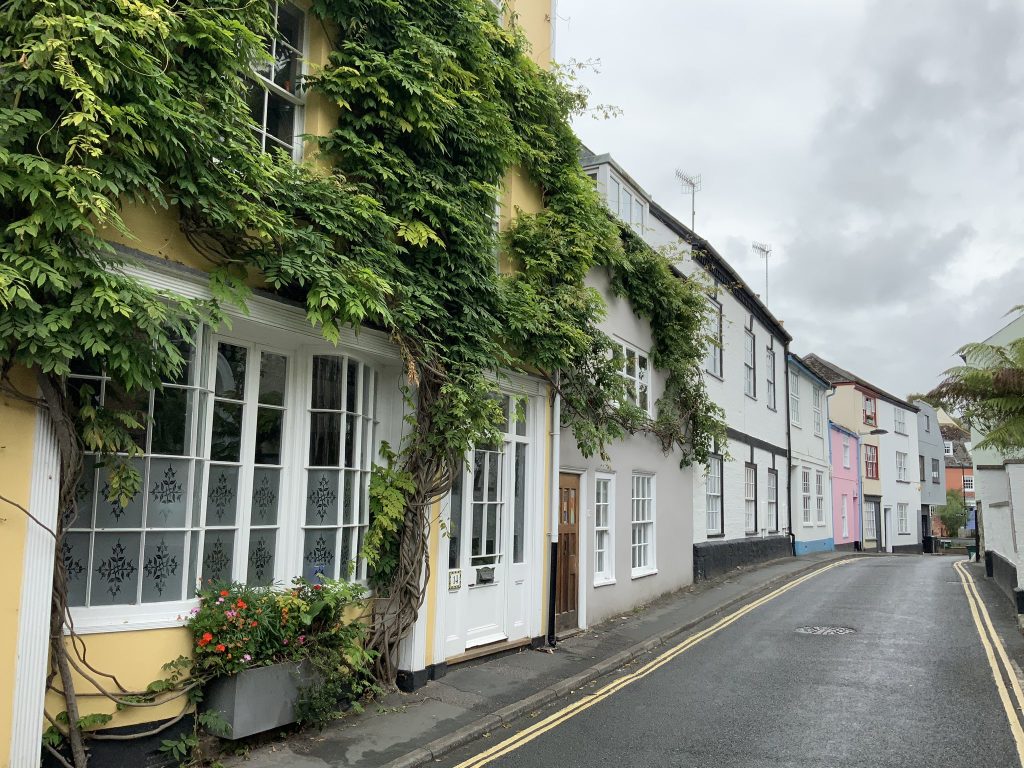 Along the Marine Parade to the beach, the street lights are designed to look like ammonites and the weather-exposed cottages fit Jane Austen’s description of the seafront.  Past the coloured beach huts, fish and chip shops, ice cream stands and a couple of excellent pubs the road turns onto the sweep of the Cobb where Meryl Streep stood gazing out to sea in the 1980s film ‘A French Lieutenant’s Woman’ as a storm from the Atlantic lashed the ammonites embedded in the stones on Monmouth beach beyond. 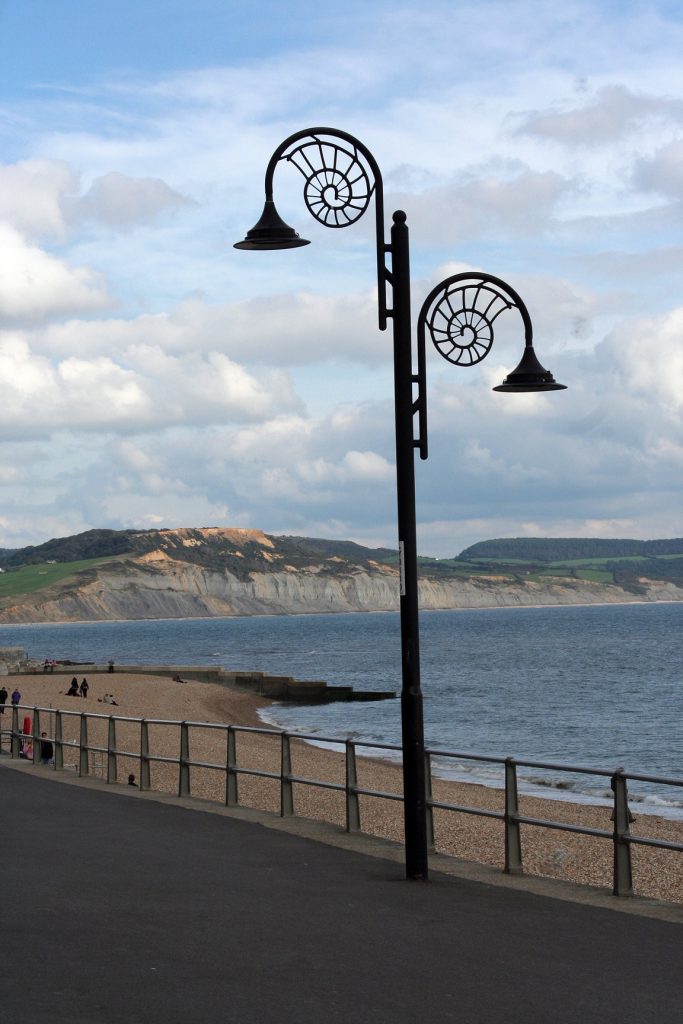 The ammonites decorating the beach lights in Lyme Regis, a local attraction. Photo by Julia Morris.

The streets behind and above the seafront show an older side to the town best explored slowly on foot with a local Blue Badge Tourist Guide. Narrow streets arranged either side of the fast-flowing River Lim have a mix of workers’ cottages and grander Victorian villas and it is possible to explore as far as UpLyme on foot or the more adventurous can pick up the coast path west to the Undercliff and Devon or east to Charmouth. There are art shops, family-owned restaurants and the Town Mill with its bakery, malthouse and gallery. A guide will uncover the stories of the writers and artists inspired by Lyme including Beatrix Potter, J.R.R Tolkien, P.G Wodehouse, J.M.W Turner and James McNeil Whistler to name a few and describe Lyme’s long maritime history.

For those seeking to understand Mary Anning’s story more intimately the church of St Michael the Archangel offers quiet insight to complete a visit.  Mary was born into a non-conformist family but later moved to worship in the Anglican Church. Her faith remained intact despite the challenge of her scientific discoveries and she was respected in Lyme for the help she gave to others when money allowed. A memorial stained glass window in the church was commissioned in 1850 by the Geological Society of London and local parishioners. It shows that her accomplishments were appreciated at the time if not formally recognised by membership or the academic citation she deserved.   This ancient church is well worth exploring and her grave is just off the path in the churchyard.  Not far beyond is the churchyard wall where the great expanse of the Jurassic Coast as far as the Isle of Portland comes into view, just metres from her grave.  The Skittles and Black Ven landslips extend to the right and Golden Cap, the highest point on the South coast rises up, block-like, in the mid-distance.  However, the well-used path from the Churchyard down to the shore is now fenced off and collapsing.  If it were not for the massive sea defences below the church Mary’s grave might one day be washed into the sea with the innumerable fossils undiscovered by the hunters.

Tracy Chevalier: Remarkable Creatures, a novel based upon her life, Harper Collins 2009.

Mary Anning and the Dinosaur Hunters: a film by Sharon Sheehan, due for release 2019/20 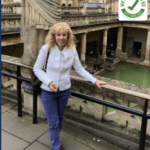 About the author: Julia Morris is a Blue Badge Guide in south-west and south-central England. She leads country and coast walking tours, including the Jurassic Coast and Stonehenge World Heritage Sites and tours of towns and cities in the region such as Bath, Salisbury, Glastonbury and Winchester.  For a taste of the wider region contact her with your ideas through the email  julia@atasteofengland.com or the website A Taste of England and she’ll work with you to draw up a tour itinerary to suit you.