As we approach Christmas, many of us are looking forward to the traditional Christmas celebrations which often include decorating a Christmas tree, gift-giving and sharing a delicious meal with family and friends. We adorn our tables with Christmas crackers and we don those customary party hats. Some of these traditions date from the Victorian era, but many have their roots in deeper history and the Roman festival of Saturnalia.

Saturnalia, in honour of the agricultural god Saturn, is an ancient Roman festival traditionally held on 17 December. Originally celebrated on just one day, over the years the festivities grew to last a whole week and coincided with the winter solstice.

The merrymaking originated from older agricultural rituals of midwinter, especially the offering of sacrifices or gifts to the gods to bless the future harvests.

The Saturnalia holiday started  with a religious ceremony in the Temple of Saturn, followed by a public banquet where everyone, rich or poor, was invited. 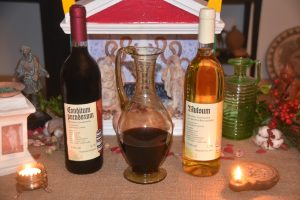 During Saturnalia, businesses closed, work stopped, and people chose to wear colourful garments called synthesis instead of the traditional togas.  Roman slaves also stopped work and were able to join the festivities; in some cases they got to sit at the head of their masters’ table and were waited on. 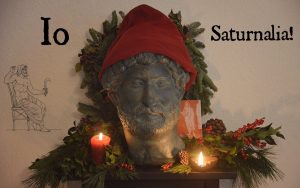 Everyone was able to wear the freedman’s cap, a conical felt hat given to freed slaves, to celebrate the liberty and free spirit of the holiday.

Greenery  and wreaths were brought indoors to  decorate homes and alongside the partying and drinking, small gifts were exchanged. Candles were common gifts symbolising the return of light after the winter solstice.

So, as you enjoy your own partying, gift giving and merrymaking, perhaps you can muse on the Roman  parallels in some of our modern festivities?

Saturnalia is being celebrated in villages along Hadrian’s wall. Click here to find out more.

However you celebrate,  best wishes for a happy festive time!

* “Io Saturnalia” was the salutation to mark the start of the festival after the public banquet on 17th December.

About the Author
Laura Rhodes is a qualified Blue Badge Tourist Guide who has lived and worked in the North East of England for twenty five years having grown up in Scotland, Yorkshire and Lincolnshire. She describes herself as a true Northerner and is able to guide in North East England, Yorkshire the whole of Scotland. You can book a bespoke tour with Laura here.