Mr Londoner sails into the capital’s maritime past

Reminders of the London’s maritime history are everywhere. In Trafalgar Square Admiral Lord Horatio Nelson sits atop his 169-ft column. This extraordinary monument is one of the capital’s most famous. It commemorates the 1805 Battle of Trafalgar. Declared a great victory during the Napoleonic Wars, some historians have subsequently downplayed its strategic importance. Trafalgar also marked the heroic death of Nelson, as he was shot by an enemy sharpshooter, on the French ship Redoubtable. Perhaps it wasn’t surprising that the Admiral, who was plagued by sea-sickness all his life, hated the idea of burial at sea. It was then decreed that his corpse was bought home, preserved in a barrel of French brandy, before receiving a state funeral. 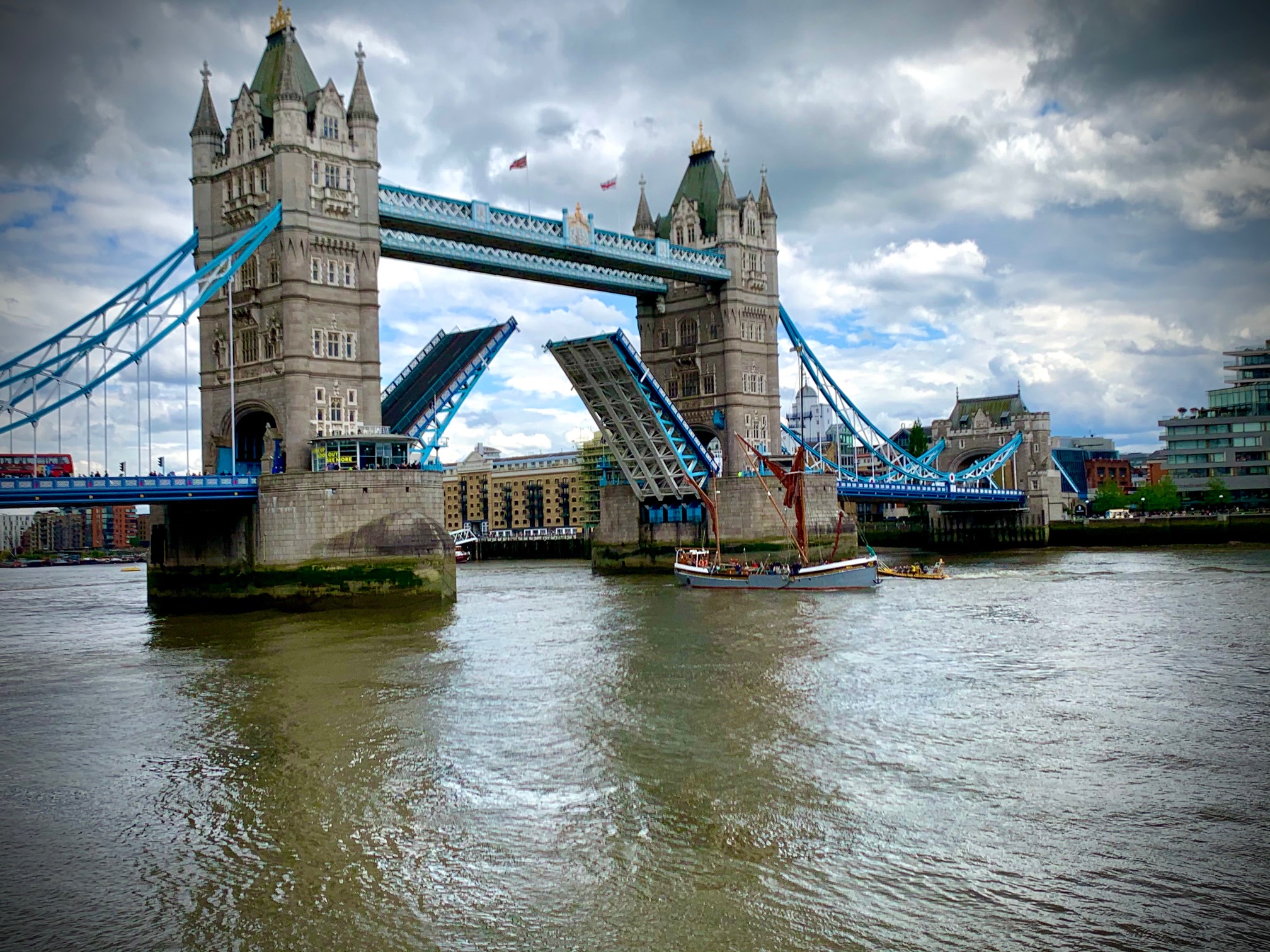 The Museum of London Docklands examines the darker history of the triangular trade in goods, sugar and slaves, upon which so much City wealth was generated, at a considerable human toll. At Tower Hill, there’s a powerful reminder of the 36,000 men and women of the Merchant Navy and fishing fleets of two world wars. Commemorated here are those who died at sea and have no known grave. The Merchant Navy attracted sailors from the UK, as well as those from Canada; the USA; the Indian subcontinent, China and elsewhere.

London’s ships tell a powerful story, for good and ill, about our nation’s place in the world. Sadly, most of our historic vessels have been scrapped – but a few notable examples survive. At St Mary Overie Dock in Bankside, shipwrights and engineers are hard at work restoring the replica of Sir Francis Drake’s ship, The Golden Hinde. The 120-tonne, 98 gun, wooden vessel set sail on its maiden voyage in 1577 as The Pelican. It was however re-named on the high seas in honour of Sir Francis Hatton, who helped bankroll the trip. Hatton Garden, London’s jewellery and diamond district, was the site of his grand manor house. Hatton’s family crest was a female deer – the golden hinde – which became both the ship’s figurehead and eventually its name. 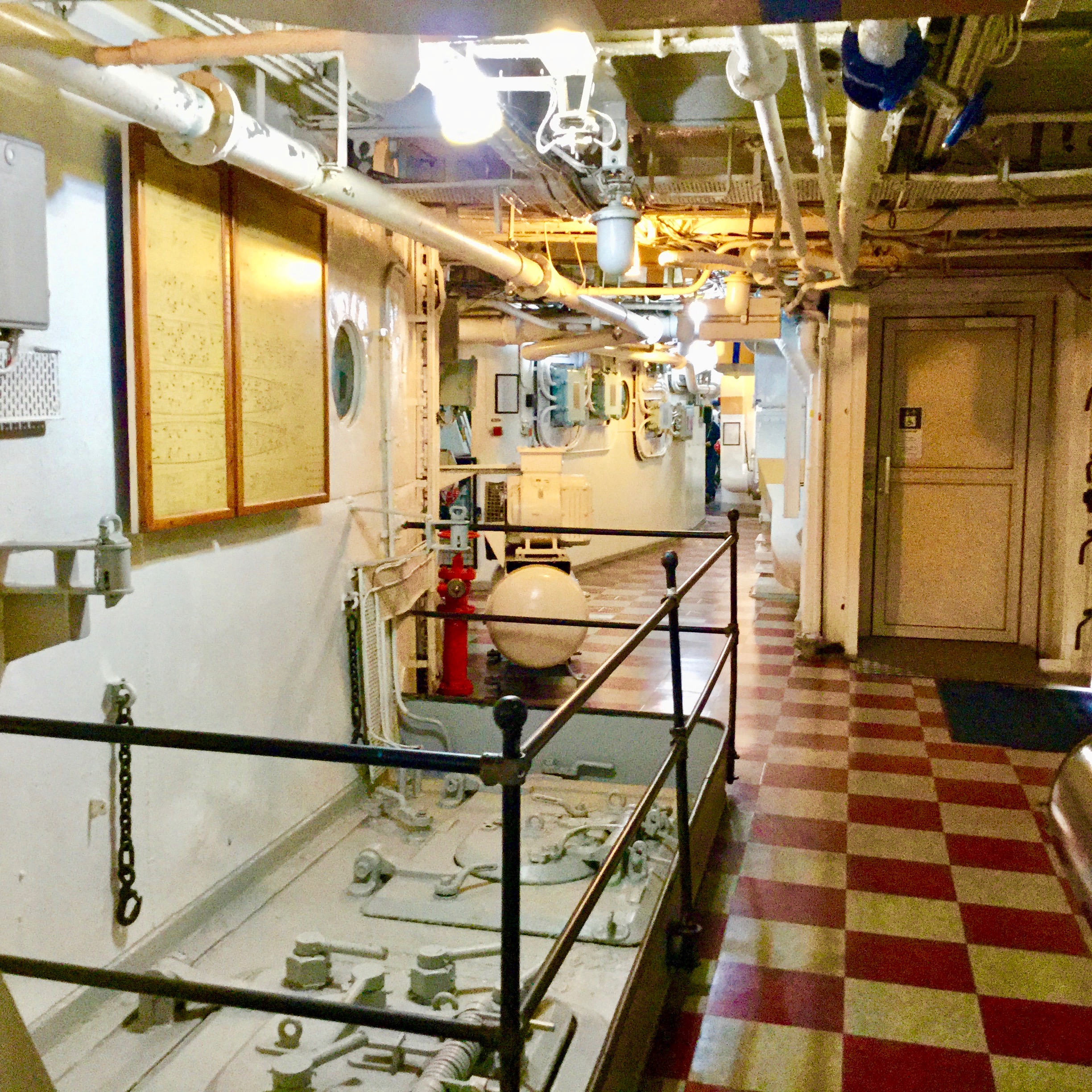 Drake’s mission was to sail the oceans and plunder the Spanish fleet – Catholic Spain being the arch-enemy of Elizabethan England. Drake’s attacks on Spanish ships proved lucrative. Rumours that some of the loot was buried probably started the age-old myths about pirates and buried treasure. This was an expensive venture: but those who backed Drake, saw a £47 return for every £1 invested – an extraordinary sum in the 17th century. Half the profits went to the Queen. She used the funds to wipe out the national debt and still had £40,000 left over.

Drake was a sailor, spy, politician – and a slaver. One of his crewmen was former slave Diego the Navigator, from Panama. He joined Drake in 1679. Diego was now a free man and remained that way – as a faithful retainer to his captain. He was with Drake when they claimed New Albion (California is they call it today I gather) for Queen Elizabeth I. Diego’s extraordinary story is explored in Miranda Kauffman’s 2017 book, Black Tudors. 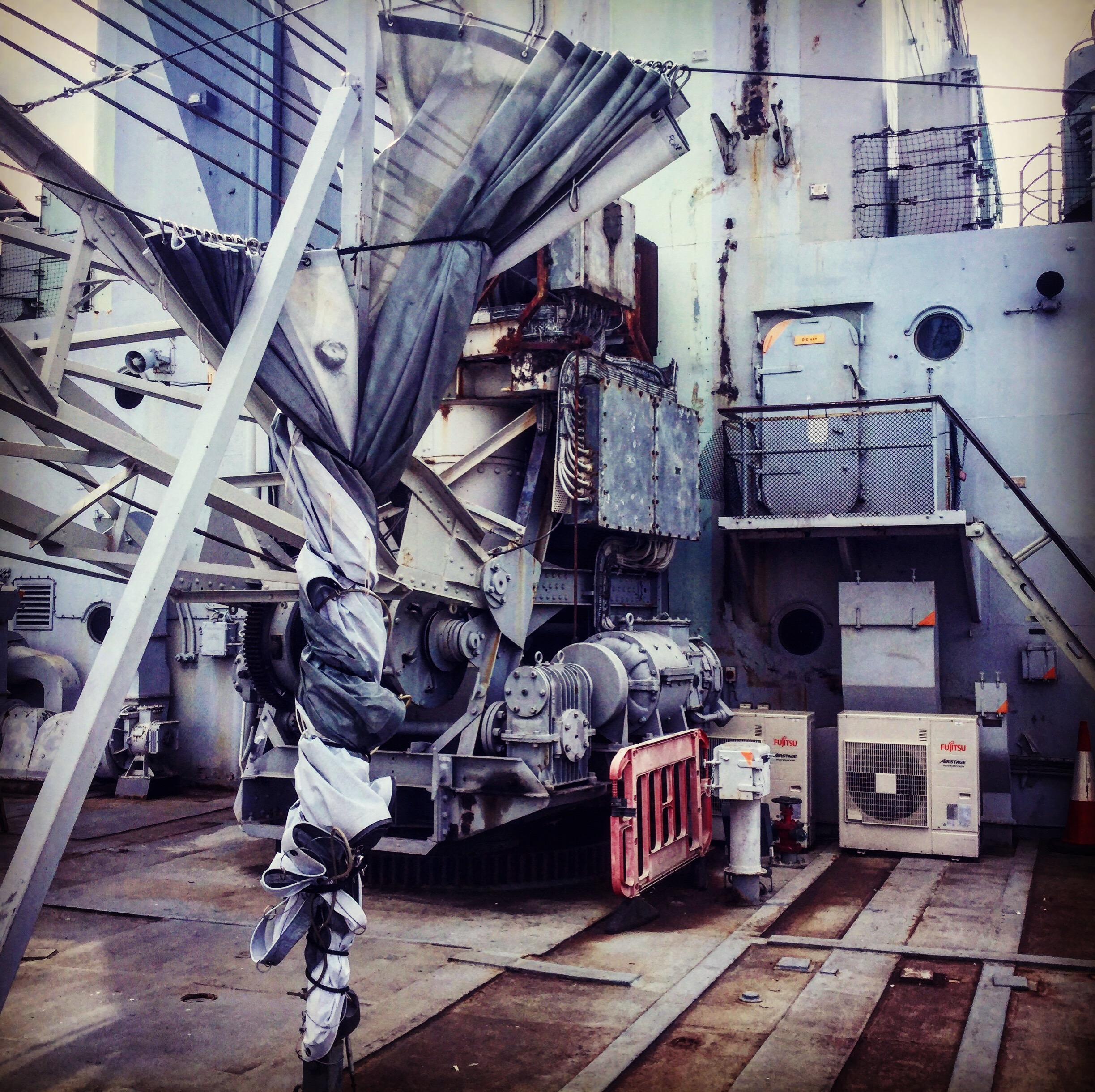 The deck of HMS Belfast @Meetmrlondoner

London’s most celebrated ship is perhaps the Second World War destroyer HMS Belfast, moored between Tower and London Bridges. HMS Belfast was built by Harland & Wolff in 1936. She was the Royal Navy’s largest and best-equipped battle cruiser. However, after only two months’ service, she hit a magnetic mine, remaining out of action for three years.

Once repaired she played a crucial role protecting the Arctic convoys – Russia’s wartime supply line. Belfast participated in the Battle of the North Cape, in which the German cruiser Scharnhorst was sank with the loss of 1,986 men. In June 1944 Belfast is said to have fired some of the first shots on D-Day. She saw action in the Korean war and was nearly scrapped in 1970. Belfast was saved by the efforts of the Imperial War Museum. Her six-inch guns are today permanently aimed at the M1 Scratchwood motorway service station, 14 miles away. Something to do with the coffee perhaps? 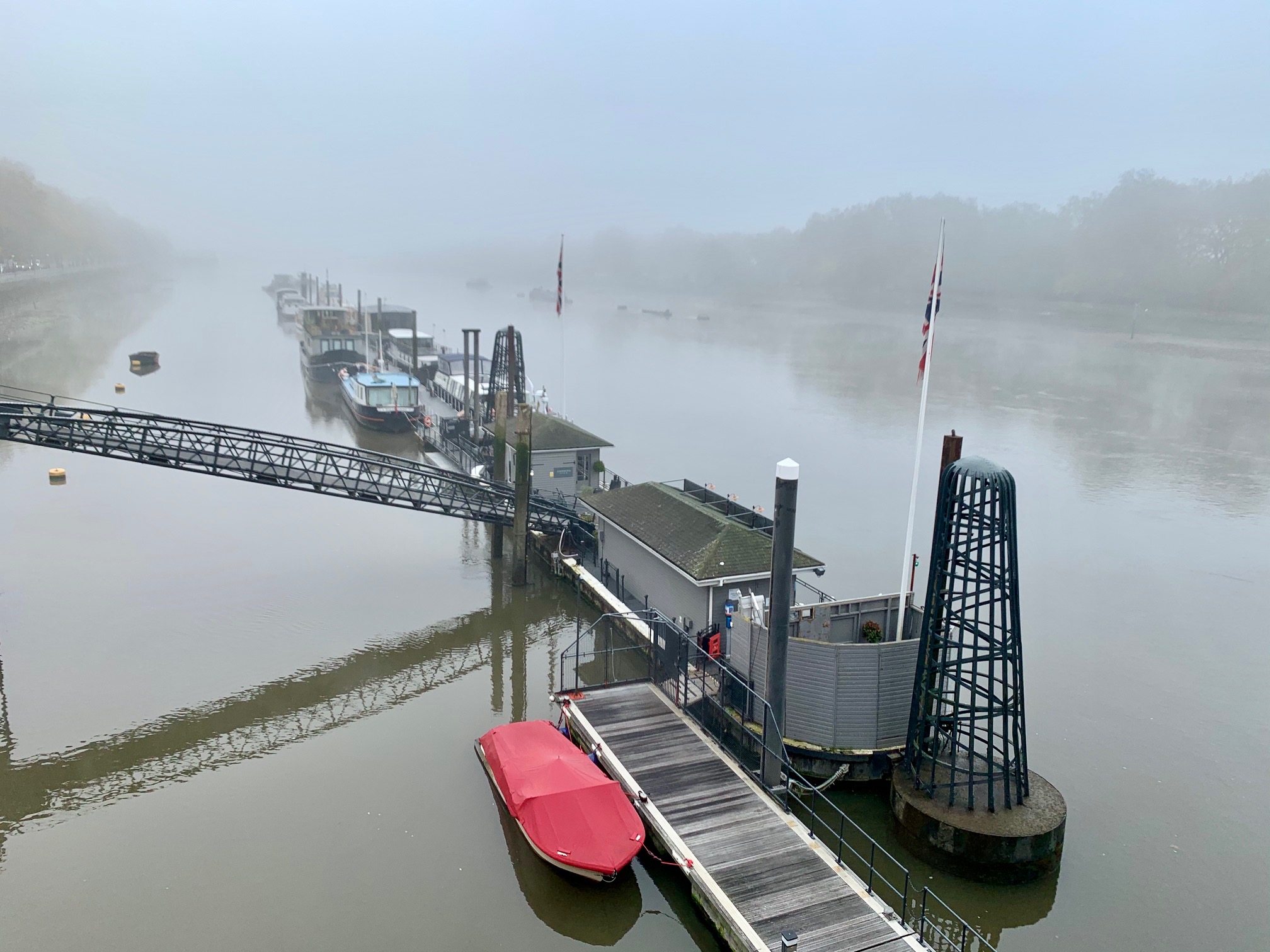 Less well-known than the Belfast, but brimming with history, is the former Royal Navy sloop HMS Wellington. Built in Devonport in 1934, she stands out in white paint and yellow funnels at Temple Stairs on the Thames Embankment. Wellington saw action in the South China Seas and the Pacific with the Royal New Zealand Navy, sharing in the destruction of a Nazi U-boat. In 1943, she was briefly commanded by John Treasure Jones, who became a minor celebrity as the last Master of the Cunard ship, the RMS Queen Mary, launched in the same year as the Wellington. Now long-retired, the former luxury liner serves as a hotel in Long Beach, California.

The Wellington has also found a new role – not as a hotel – but as the HQ of one of the 110 City Livery Companies, the Honourable Company of Master Mariners. The organisation promotes the Merchant Navy. It ensures the maintenance of the highest professional maritime standards and is open to mariners of both the Merchant and Royal Navy. 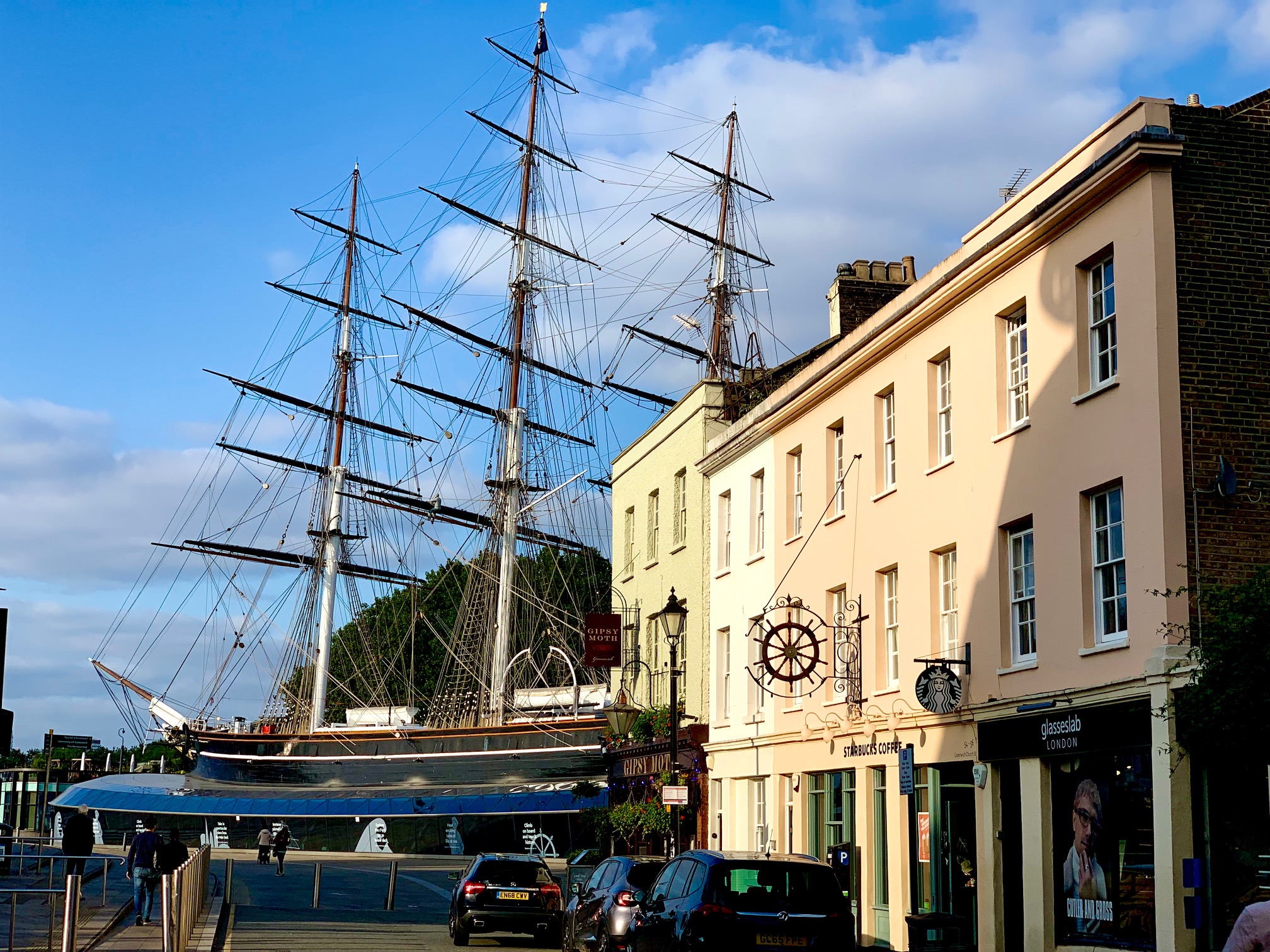 All the tea in China

The Cutty Sark, built in 1869, is one of the leading attractions in Greenwich – also home to a royal palace, the former Royal Naval College and National Maritime Museum. The ship is named after the witch in Robert Burns’ 1871 poem Tam O’Shanter. Cutty Sark was a tea clipper bringing back this fashionable and expensive cargo from China in record time. The ship’s figurehead, Nannie, is the soul of the vessel. The 19th century original was lost in a storm. The 1957 replacement was looking worse for wear, so a newly-commissioned Nannie – by ship’s carver Andy Peters – was unveiled this year.

On her 1870 London to Shanghai maiden voyage, Cutty Sark exported beer, spirits and the best of British manufacturing. She brought home a million tonnes of tea during eight trips to China, but sail ships like the Cutty Sark became redundant in a new age of steam. 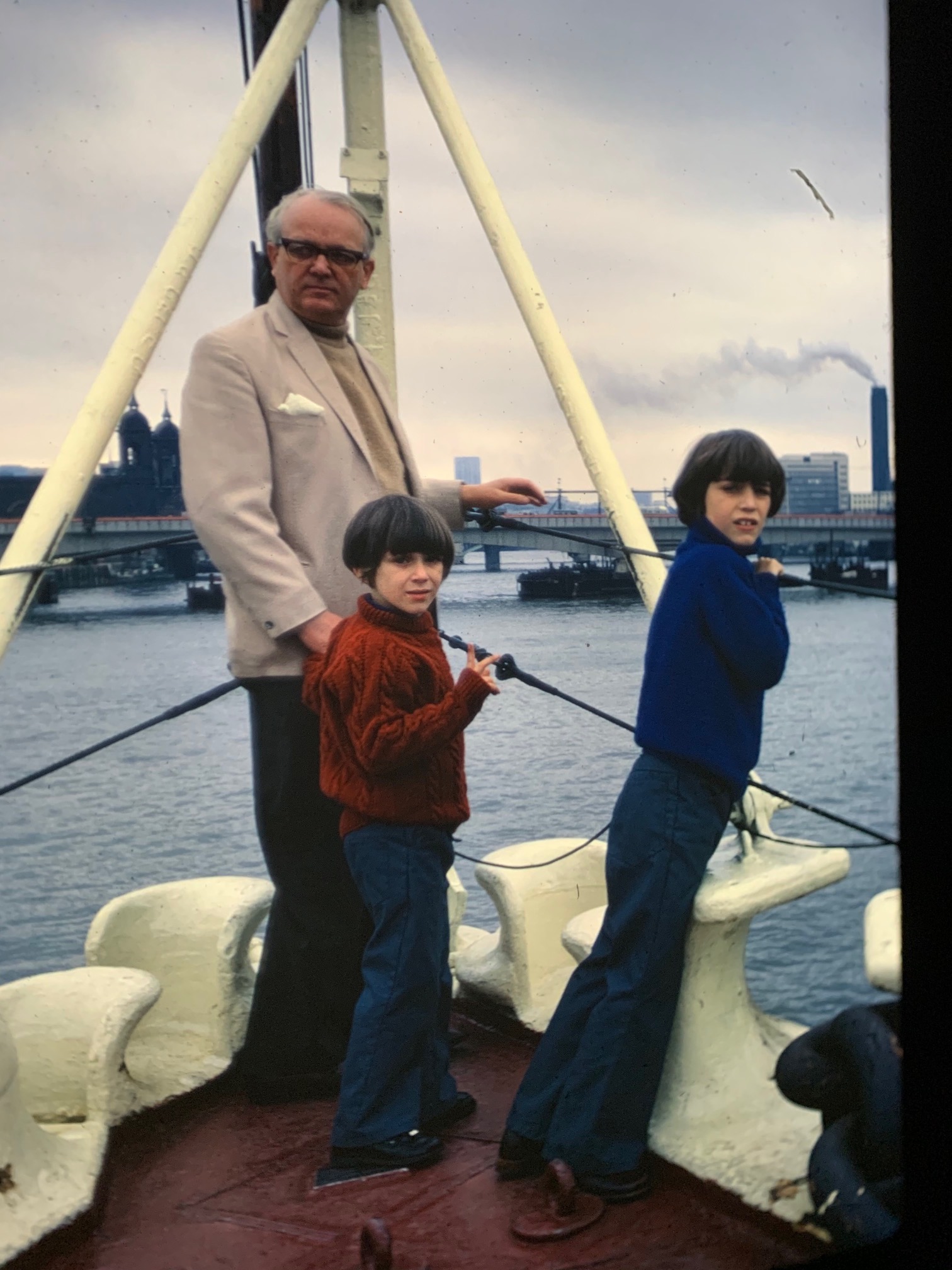 Mr Londoner (r) with his father and brother on HMS Belfast in the 1970s. Note the smoke from the chimney of what today is the Tate Modern. @Meetmrlondoner.

A vessel we can’t visit is the RMS (Royal Mail Ship) Lancastria. She was sunk off the French Coast at St Nazaire during rescue operations in 1940. Crammed with French soldiers and British civilians, she was struck by four bombs. Over 4,000 people drowned in Britain’s worst ever maritime disaster. Unlike the story of the Titanic, few today know of the much greater tragedy of the Lancastria.

Launched as the SS Tyrrhenia, she was bought by the Cunard Line in 1924. Becoming the  troop ship Lancastria in 1939, she was lost a year later. The barnacle-encrusted ship’s bell was recovered by divers in the 1970s. It’s now in the beautiful Church of St Katherine Cree, in the heart of the City of London. Very few people know it’s here – a little-known object and yet remarkable testament to our maritime history.