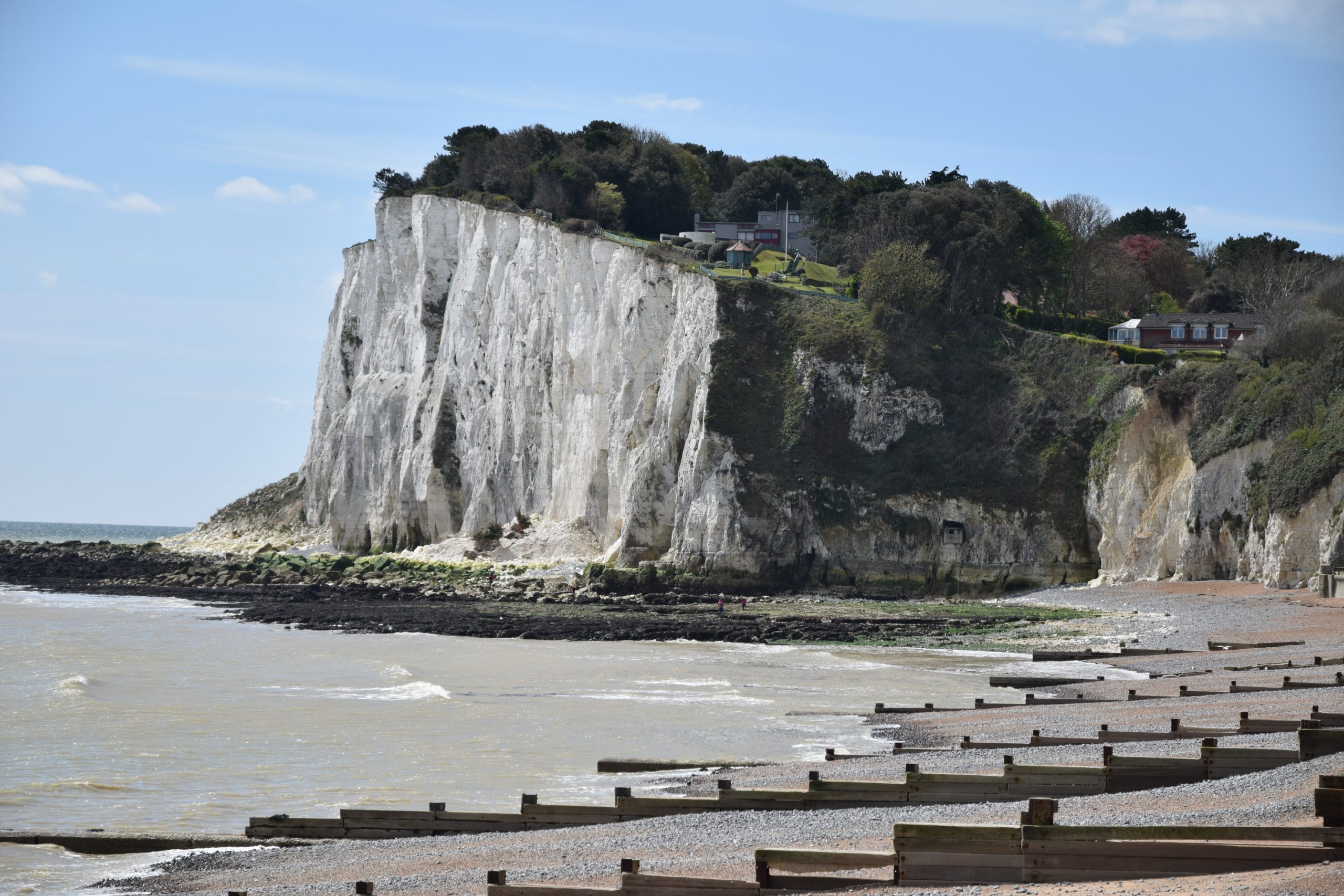 When you start reading about the events of WW2 in the British Isles, you frequently come across photos of the devastating aftermath of the bombing of London. You may also come across many photos from the invasion of Normandy.

If Nazi forces could bomb London, which is about 70 miles away from the closest point to the Continent, what do you think it was like on the south coast and the south-eastern point of the country? And what was it like in Dover itself, where the English Channel is at its narrowest?

There is not much photographic evidence of war time on the Kent coast, simply because the towns, villages and beaches suddenly became very important strategically. They were declared restricted zones, which meant the introduction of a lot of new strict rules concerning secrecy and censorship. It meant that all aliens or foreign residents were forced to move from coastal areas and leave their homes and businesses at very short notice. Nobody was allowed to use binoculars or any cameras in the area. People were not allowed to write or even talk freely about the events and situation on the coast. It even meant that people were not allowed to swim in the Channel and sunbathe on the beaches.

Even before the official start of Operation Sealion, which was Nazi Germany’s code name for the plan to invade Britain, and before the start of the Battle of Britain itself on the 10th of July 1940, this is what it was like here on the Kent coast of the English Channel:

Excerpt from the article “This is Front” by H.W. Shirley Long in Sunday Pictorial on June 2, 1940.

“It is at your side” was right here, in “Hellfire Corner”, as this area in the south-east corner of Kent became known by the end of the war. This is hardly surprising, as the area around Dover and Folkestone was subjected to heavy bombing and extremely extensive shelling from the occupied French coast.

Hitler ordered his military engineers to erect a network of batteries for some of the Third Reich’s biggest guns along the French coast at Cap Gris Nez. The distance between South Foreland near Dover and Cap Gris Nez is only 20.7 miles.

While the Führer hoped the weapons would close the Straits of Dover to allied shipping, he also imagined that his gun emplacements could provide fire support for a future cross-Channel invasion of the British Isles. 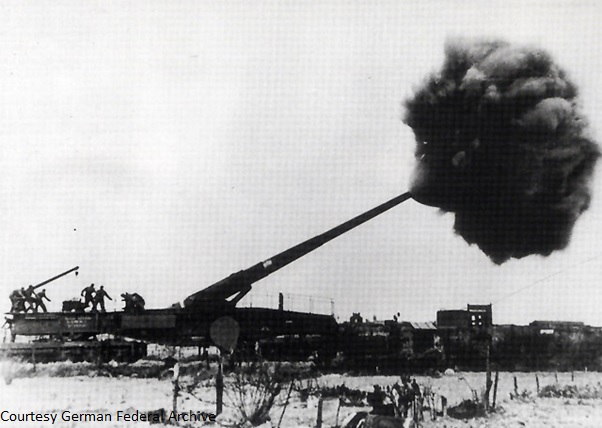 Soon, the French coast facing England was overrun with guns with six batteries running from Boulogne-Sur-Mer eastwards towards Calais and beyond. They ranged in size from light cannons capable of lobbing explosives up to 33 kilometres, to massive radar-controlled weapons, which could hurl one-ton projectiles more than 50 kilometres. In all, nearly 75 high-caliber weapons were trained onto England’s southern coast. Before the end of August of 1940, the first of these guns began dropping shells onto the channel as well as onto British soil.

And this was just the beginning.

Dover and the surrounding area were covered with batteries and tunnels, which were used as shelters, headquarters or billets for the gunners. There were also many underground air-raid shelters in the caves under the cliffs.

Between the summer of 1940 and September of 1944, the German military subjected the Dover Strait and the Kentish countryside to a battering of artillery. Some shells landed as far inland as Chatham — around 50 miles towards London from the coast. In all, at least 1,000 attacks were recorded in just over four years (an average of one every two days). Dover, which can easily be seen from the French shoreline, bore the worst of it. Up to 10,000 buildings in and around the town were damaged by shellfire and more than 200 civilians were killed. Hundreds more were injured.

“Hellfire Corner” is also the area from where Operation Dynamo was conducted. From 26 May to 4 June 1940, every boat, big and small, from this area went across the Channel to help, resulting in thousands and thousands of soldiers being landed in the harbours of Dover and Folkestone. In total, the large and small fleet rescued 338,226 allied troops including 224,320 British Expeditionary Forces, who were stranded on the beaches of Dunkirk under almost incessant enemy fire.  Minesweepers were constantly involved in the dangerous task of clearing mines strewn across the Straits of Dover and each time a mine was destroyed, it is reported that the explosion rocked local houses. 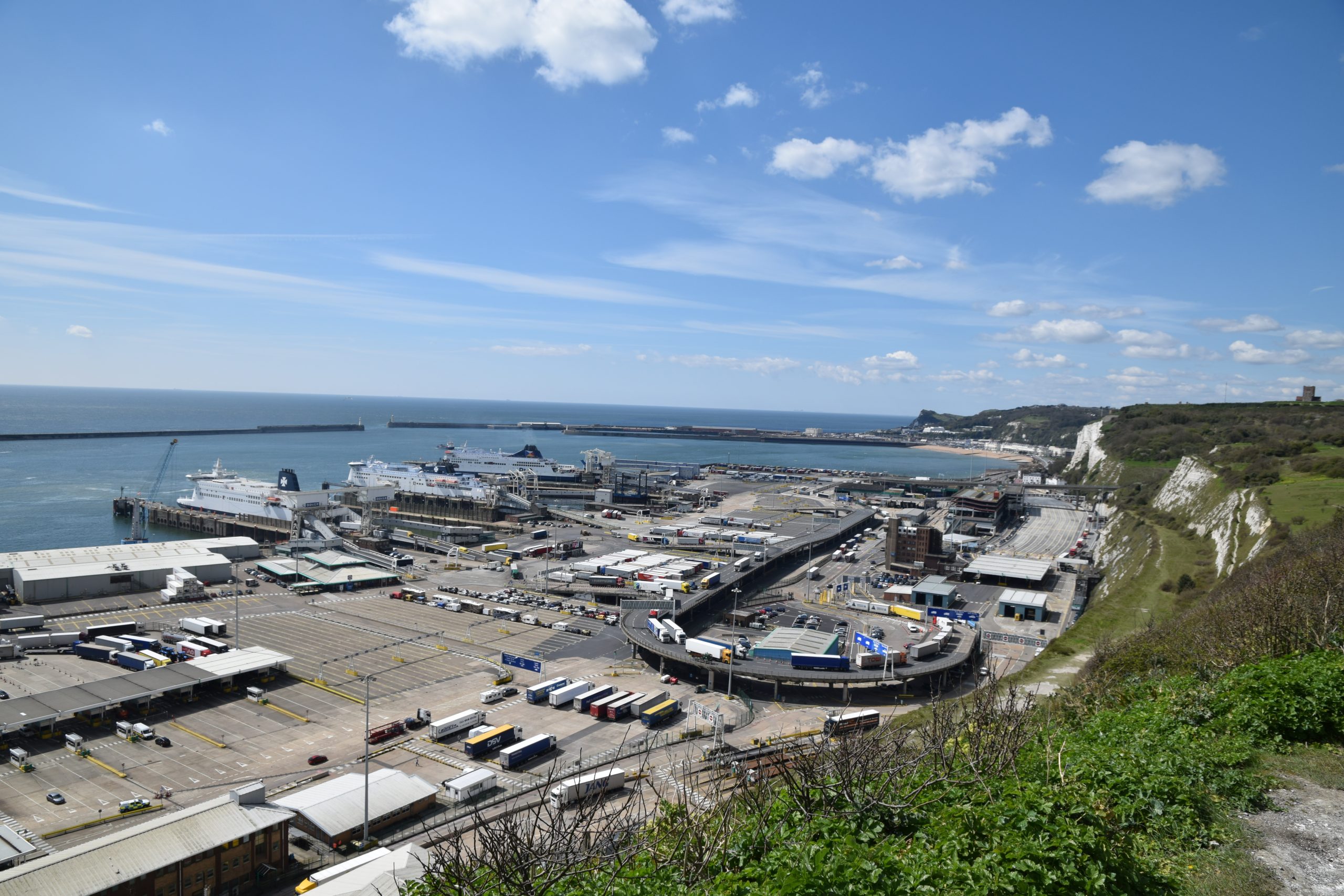 It was in the skies above “Hellfire Corner” where the Battle of Britain was fought in the summer of 1940. This became known as the “Spitfire Summer”.

RAF Hawkinge was situated on the North Downs outside the village of Hawkinge, a few miles north of Folkestone. This was the nearest Royal Air Force station to the enemy-occupied Pas-de-Calais, where Luftwaffe fighters were based and were a mere 6 minutes’ flying time away. 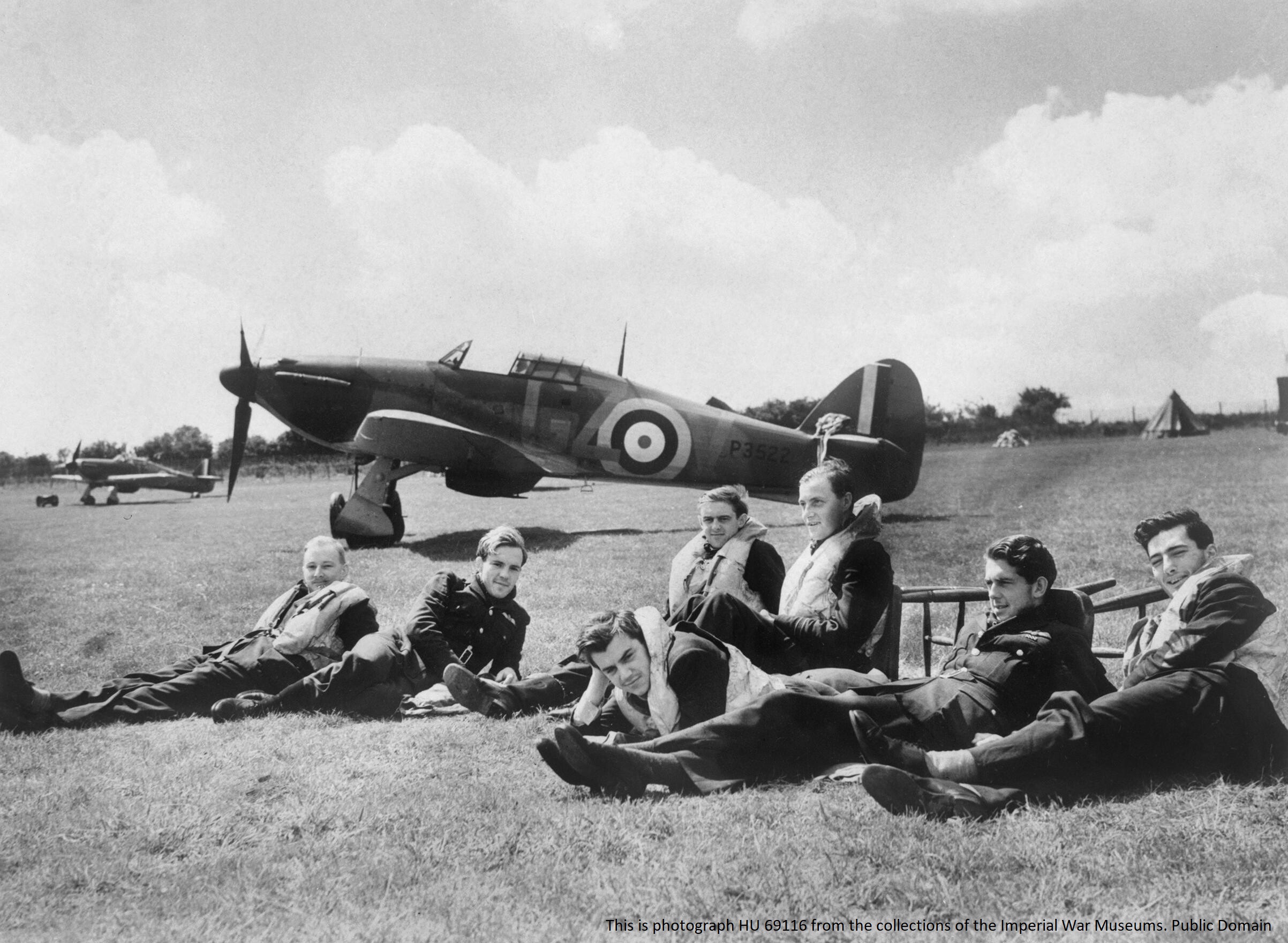 When the Battle of Britain began on 10th July 1940, RAF Hawkinge had already been in existence for twenty years. Under the control of Fighter Command, Hawkinge had become a satellite airfield of Biggin Hill Sector Station. It was already in the ‘front-line’ when Luftwaffe activity increased in the skies over Kent. Every day, squadrons of Hurricanes and Spitfires flew down to Hawkinge at first light. From there, they operated their sorties from dawn till dusk, when they would then fly back inland to relative safety. The aerial battles were fought at anything between 2,000 and 20,000 feet.

The Battle of Britain was, without doubt, the last period in English history in which one was likely to witness close aerial combat between two elite Air Forces.

It became an everyday occurrence to see fighters crash-landing on the aerodrome. The pilots wrestled with combat-damaged aircraft, which had been blasted by cannon-fire and raked with machine-gun bullets. There are many eye-witness accounts of aerial combat and crashes. On 12th August 1940, RAF Hawkinge was to receive the first of many attacks on its airfield.

In Folkestone and Dover, during the Battle of Britain, Folkestone residents witnessed dog fights every day or sometimes several times a day. Crowds often gathered to watch the dogfights despite the danger of shrapnel from the anti-aircraft guns and fire from the planes. Apparently, some spectators even covered their heads with newspapers, as if they would provide them with protection! Sometimes there were cases when a dogfight was taking place at such a low altitude, that the roofs of houses actually fell in. 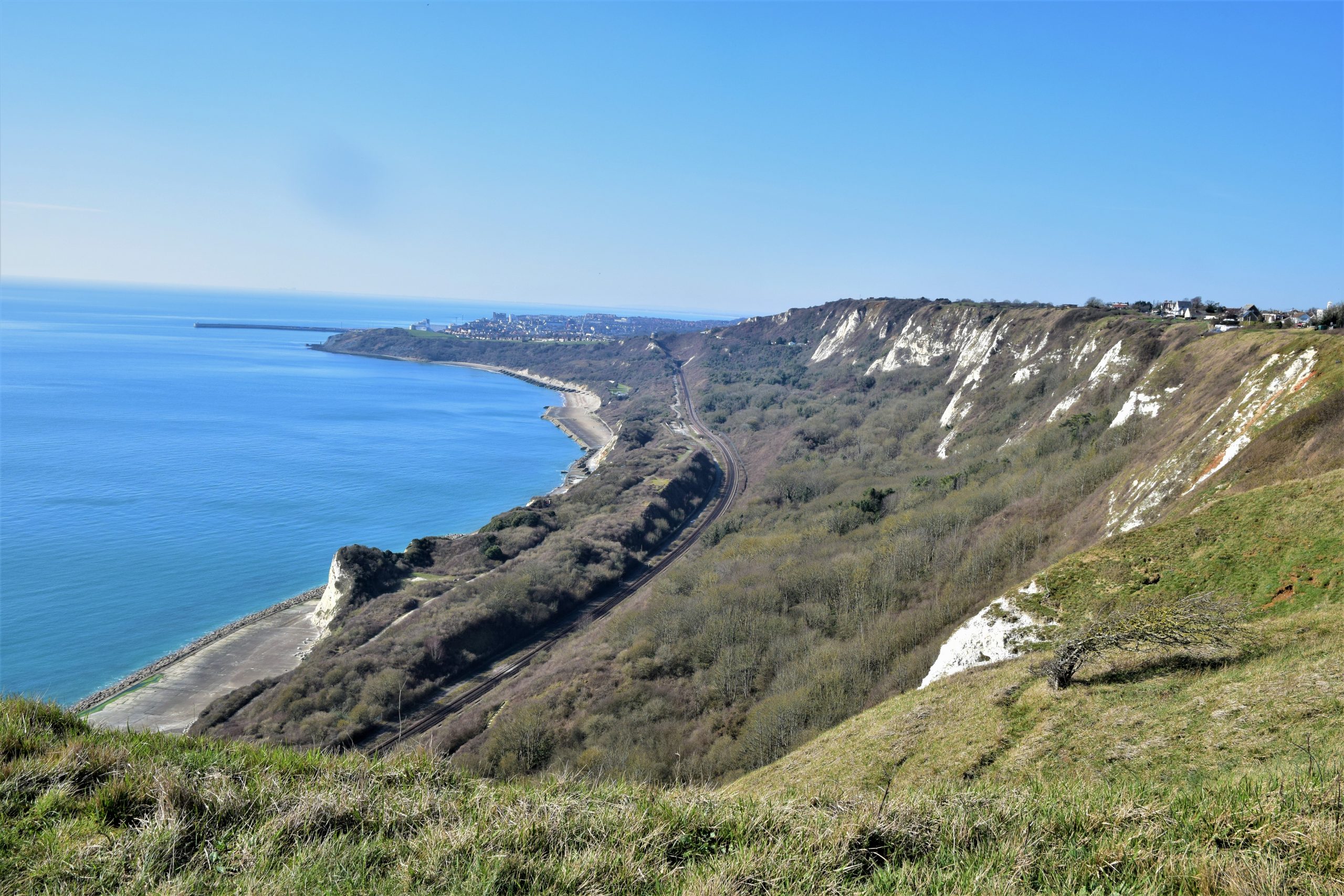 There were always a lot of barrage balloons flying. These were put up at strategic points to deter enemy planes. They were held on very thick wires, which were meant to bring down enemy planes that ran into them. The balloons were mainly the responsibility of women. In August and September of 1940, with the Battle of Britain at its most intensive stage, the attacks launched by the German Luftwaffe on these barrage balloons were very frequent.

In preparation for D-Day in the spring of 1944, there were a lot of things happening in this part of Kent. In Folkestone, there were many American and Canadian troops in local training camps. All the main road junctions between the central station and the harbour were dug up and relaid with reinforced concrete so that tanks would not churn up the roads. There was also a large slipway built down from the fish market so that tanks could be loaded onto landing craft, and dummy LCTs (Landing Craft Troops) were floated around the harbour. Local residents did not realise why there were so many training activities and the accumulation of military vehicles in the town. They only realised later on that all this was to fool the Germans into thinking that the invasion of Europe was to take place from here across the Straits of Dover. 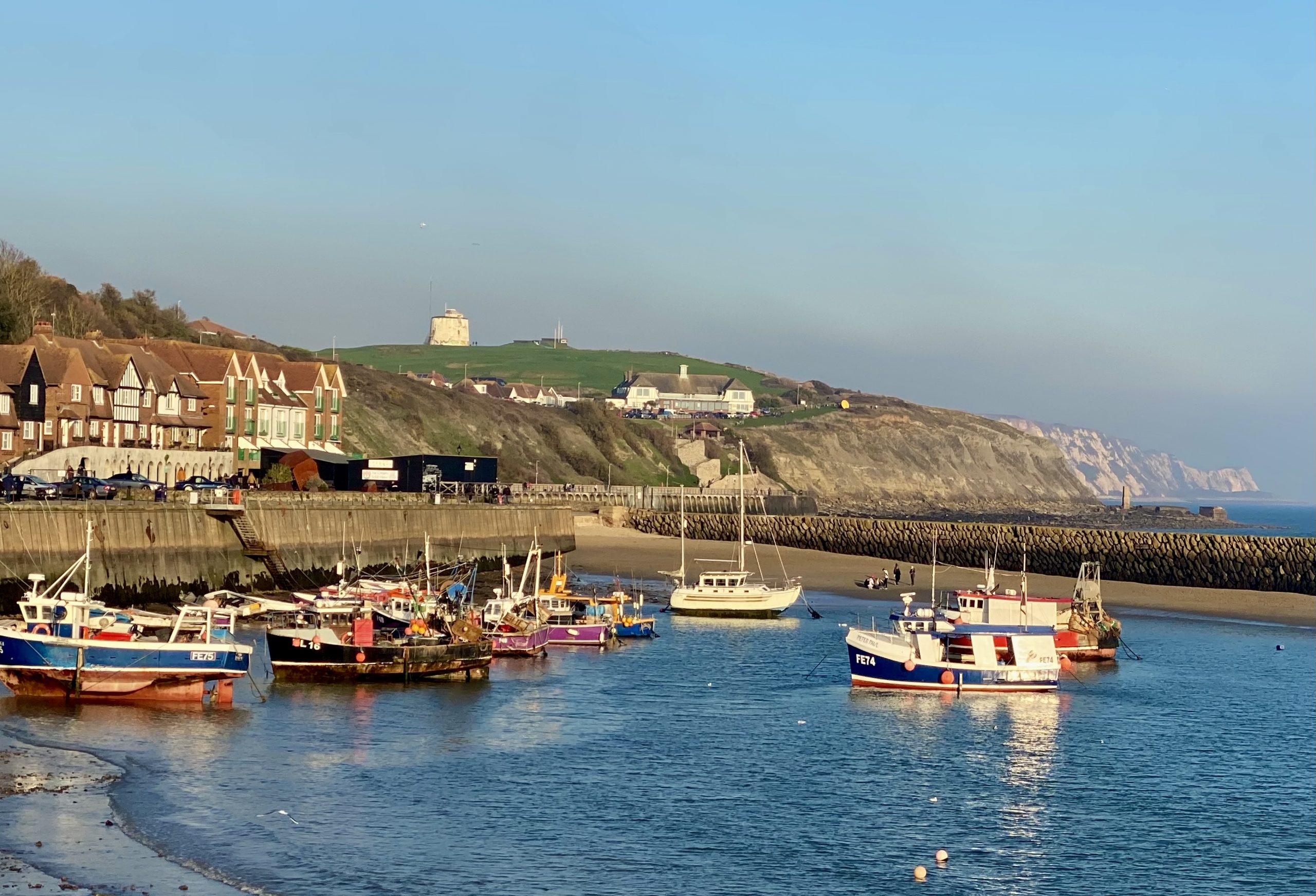 Folkestone Harbour and fish market, from where the tank slipway was constructed. Image by Tanya Firth

In preparation for D-Day in June 1944, the bombing of the areas occupied by the Nazis across the Channel intensified. Throughout the day and night, heavy bombers crossed the Channel and the crash of their bombs and enemy fire could be heard and even felt on the English side of the Channel. Boulogne and Calais were attacked by strong forces of Flying Fortresses and Liberators, escorted by Thunderbolts and Mustangs. Some journalists and residents reported that “a number of bombers passed over Folkestone and headed across the Channel. Formation after formation clustered together like swarms of flies.”

The shelling from the French coast was very frequent, especially from the middle of 1943.

According to an article in the Folkestone, Hythe and District Herald at the end of the war, local statistics were as follows: 2914 air raid warnings, 519 high explosive bombs, 102 air raids, 218 occasions of shelling, 26 V1 flying bombs, 14,141 properties badly damaged, 123 people killed and more than 700 injured.

Immediately after the D-Day landings, the shelling of Folkestone, Dover and “Hellfire Corner” became even more intensified, but a few weeks later the German guns finally fell silent when Calais fell to the Allies with the support of gunfire from this side of the Channel. 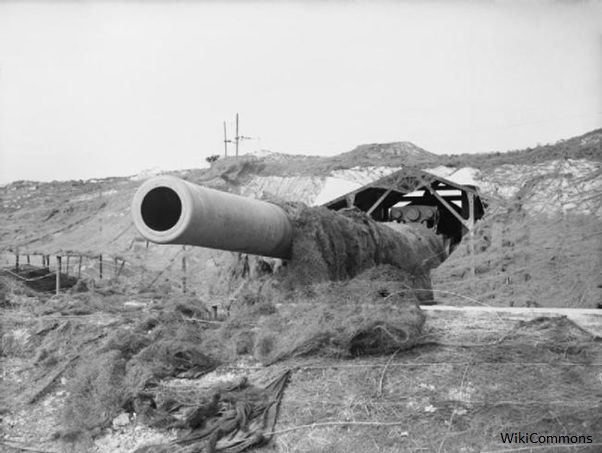 “Winnie” a cross-Channel 14-inch gun at St Margaret’s at Cliffe, near Dover. It was named after Churchill and was accompanied in February 1941 by a similar gun called “Pooh”. Image: WikiCommons

On Sept. 26, 1944, British and Canadian troops closed in on the city of Calais. Knowing their batteries were about to be overrun, the German commanders ordered their artillery to unleash a final barrage on the English coast. As the day wore on, Dover was battered by as many as 50 shells. Five Britons died before the guns at Cap Gris Nez were finally silenced. Their last victim was a 63-year-old woman by the name of Patience Ransley. She was sheltering in a dugout in the Dover area on 26 September 1944, when a 16-inch German shell blasted into the concrete roof of the structure. The poor lady was crushed beneath a pile of debris. 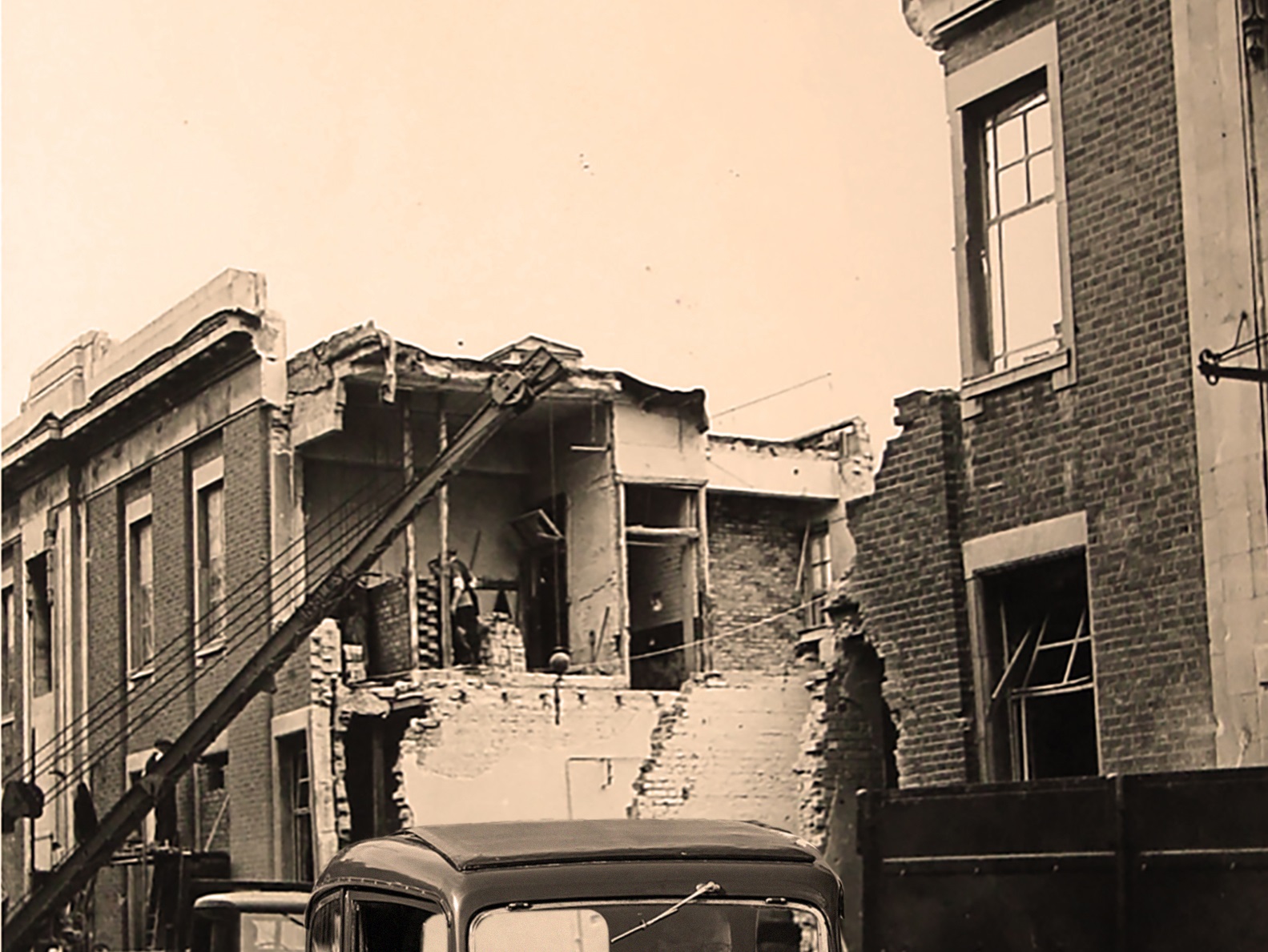 In total, Dover received 464 high explosive bombs, 1,500 incendiaries, three parachute mines, 3 V1s and 2,226 high explosive shells fired by long-range guns on the French coast. Of the civilian population, 216 people were killed by shells and bombs and over 500 hundred injured. 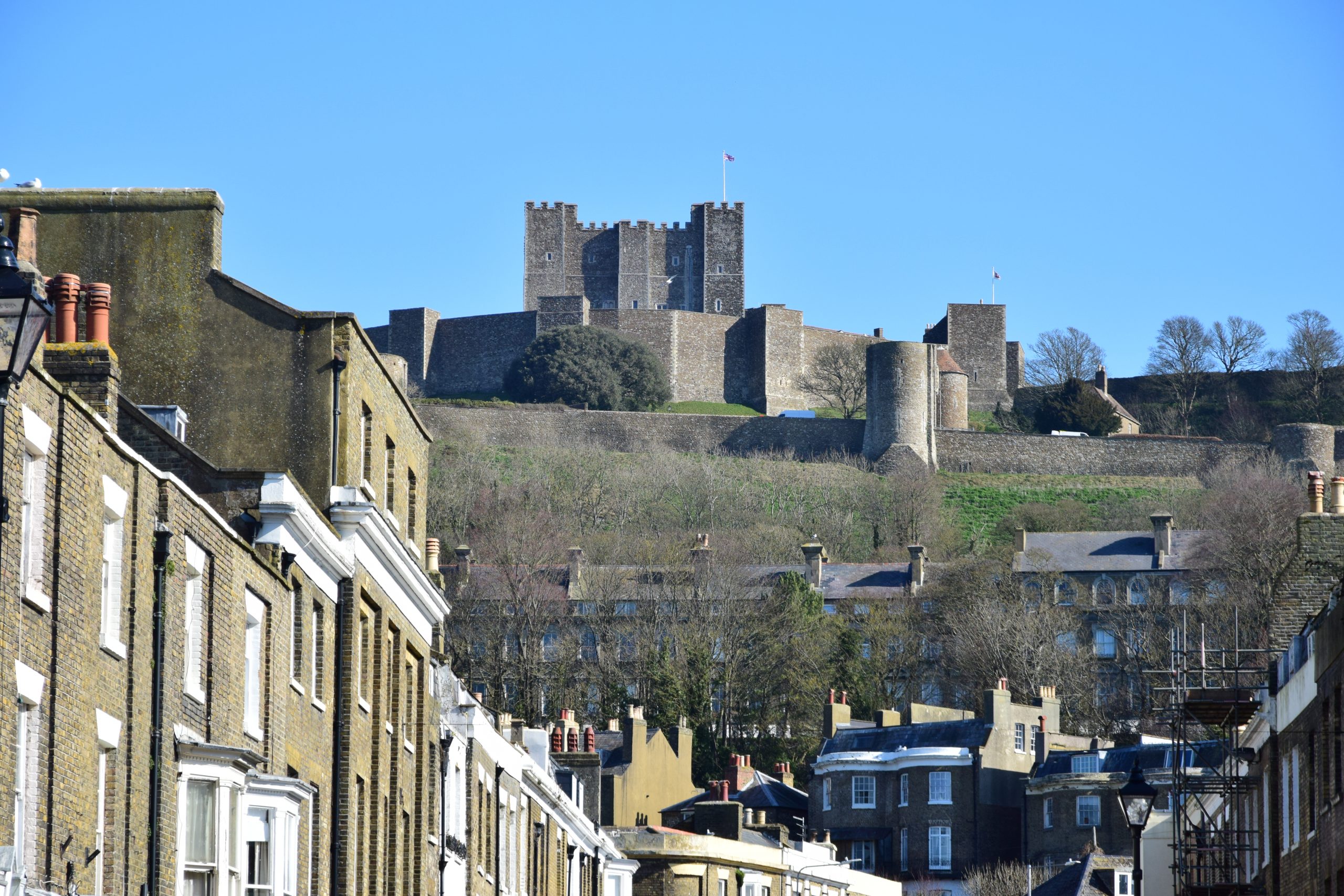 When the news of the Canadians’ capturing of the German guns across the Channel reached Dover, people flooded into the streets. There was a spontaneous outburst of joy and celebration. For the residents of “Hellfire Corner”, this finally meant the end of constant fear and even war!

The celebration was supported by the royal visit of King George VI and Queen Elizabeth on 18 October 1944. 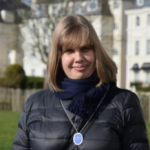