Writer and broadcaster Antony Robbins, AKA Mr Londoner, takes us through the brief history of London’s Chinatown.

The end of January marks the start of the Chinese New Year and over two weeks of special events. So now is the very best time to visit Chinatown. This vibrant neighbourhood is at the very southern end of Soho – one of our most intriguing and historic districts – and it’s right in the heart of everything.

Ancestor worship
The New Year festival is the highlight of the Chinese calendar and it’s an opportunity to enjoy the vibrant spectacle of dancers, drummers, dragons, lanterns and lots of food. Ancestors are remembered and luck and good fortune are ever-present themes. People come together in family feasts. Houses are spruced-up in a Chinese version of the spring clean – symbolising the sweeping away of the bad luck of the old year. 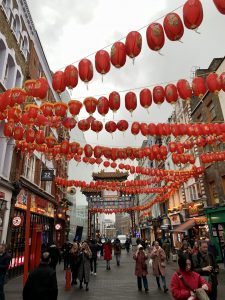 This special time is also known as Spring Festival or Lunar New Year – and 2020 is the Year of the Rat. It may come as a surprise – given the rodent’s associations with poverty and disease – that rats in Chinese culture are celebrated. The rat traditionally indicates wealth and surplus. This most- maligned of mammals is, of course, a prodigious breeder – and so newly-married couples honour the rat in the hope of conceiving. 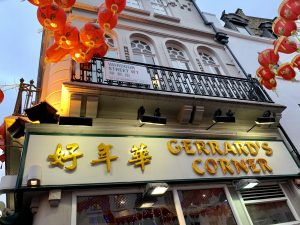 Chinese food is very diverse. Restaurants here cater for all tastes and all pockets

Break with Rome
I regularly run tours of this fascinating and once-aristocratic neighbourhood, with its wonderful 18th and 19th-century buildings. Chinatown and the whole of Soho were originally monastic lands. During the 1530s they were grabbed by King Henry VIII during his Brexit-like break with the Pope in Rome. This rift is the reason that England (and America come to think of it) are Protestant countries. The former monastic lands became royal hunting forests and the district gets its name from the hunting cry So-ho! Ye hare is found. It’s nothing to do with South of Houston Street in case you New Yorkers were wondering.

Aristocratic neighbourhood
Cash-strapped monarchs started to sell pockets of these royal lands and gradually expensive houses dominated the scene. Over time, however, Soho fell out of fashion. The rich moved west to courtly St James’s and swanky Mayfair – then as now associated with wealth and status. 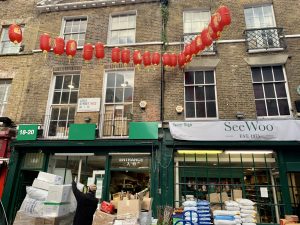 The SeeWoo supermarket was the first place in the UK to sell Pak-Choi (Chinese cabbage). The building is also where the world’s first TV sets were built.

New people move in
The Chinese community arrived here In the 20th Century. By then Soho had become a working- class district with deteriorating housing stock and cheap rents. But it was also a place with a history of welcoming in people from across the globe. Soho celebrates difference to this day. 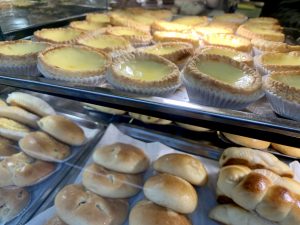 The Kowloon Restaurant on Gerrard Street makes a mean custard tart. The Chinese claim to have invented custard. They do a good pork bun here too

New food on the menu
Chinese restaurants appeared in Soho between the wars. During the late 1940s and 1950s families started to move in from the East End of London – having been bombed out during WW2s ‘Blitz’. They had previously settled there – around London’s docks – in the late 19th Century. They lived in Victorian housing, which was sub-standard even before the interventions of the German air force. Traces of this former East End settlement still exist if you know where to look.

The Chinese community in Soho swelled in the 1960s with the arrival of immigrants from across Guangzhou (Canton) and from what was then British Hong Kong. Many Chinese workers from the eastern half of China fled the hardships of economic pressures precipitated by Chairman Mao’s Great Leap Forward. This masterplan to transform communist China’s economy ended in famine and emigration. 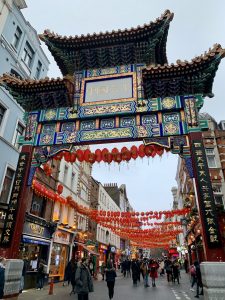 A not-so-ancient community
Chinatown looks like it’s been here forever. Appearances are deceptive. Although the first Chinese families moved in during the 1940s and 1950s, it wasn’t until the end of the 1970s that Chinatown was properly established. The 1980s saw some well-planned investments. Chinese gates (in traditional Qing Dynasty designs) arrived. New street furniture and a pavilion were added. Gerrard Street – in the heart of Chinatown – by now bustling with restaurants and Chinese supermarkets, was pedestrianised. 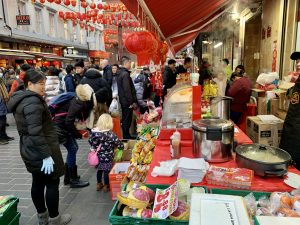 Street food adds to the vibrancy of this busy neighbourhood

Hidden history
Today this vibrant area bristles with activity and life. It’s full of hidden history and its car-free streets make it an especially pleasant district to explore on foot. Chinatown is also a really wonderful place to eat, with high-quality and often surprisingly diverse food to suit all pockets.