On 24 January in AD76,  Hadrian was born in Italica (close to modern Santiponce in Spain). His father was Publius Aelius Hadrianus Afer, a senator of praetorian rank; his mother was Domitian Paulina, daughter of a distinguished Hispano-Roman senatorial family from Cádiz. Despite losing his parents when he was 10 years old, young Hadrian was probably destined for great things and indeed he became Roman Emperor from 117 to 138. 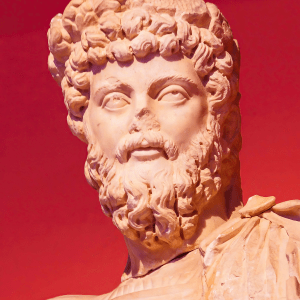 His legacy in Britain was the building of his eponymous landmark, Hadrian’s wall – an impressive defensive fortification and now a UNESCO World Heritage Site. The length of the wall was 80 Roman miles or 73 miles in today’s measures. This covered the entire width of northern Britain, from Wallsend on the River Tyne, in the North East, to Bowness-on-Solway in Cumbria, in the West. The wall was once the most northerly frontier of the Roman Empire and it holds over 1900 years of fascinating history and heritage along its length. 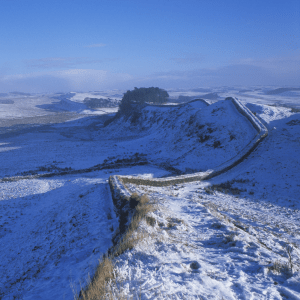 Visiting parts of the the wall opens up a whole new level of discovery of this Roman frontier post. Here you’ll find a wild and rugged landscape, evidence of forts, turrets, towers and Roman towns and all the support systems required of an important fortification. There are also museums along the way where you can explore the lives of the soldiers who lived and worked here. Some of the sites along the wall are in challenging terrain, but there are plenty of places which are more accessible. Blue Badge Tourist Guide, Laura Rhodes, gives a brief overview of what’s on offer along Hadrian’s Wall.

The site at Vindolanda, just south of the wall, was actually in use before Hadrian’s wall was built and is a fascinating place to find out about the soldiers who came to Britain from all over the Roman Empire. Some of the letters they wrote home are on display within the museum; the Vindolanda‬ tablets were named Britain’s top archaeological treasure by the British Museum. 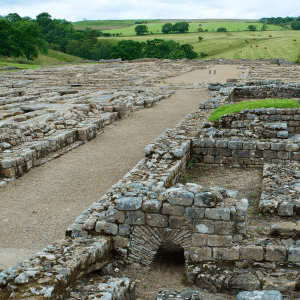 Nearby, an indoor attraction along Hadrian’s wall is the Roman Army Museum, which is on the site of the fort at Carvoran. This is an excellent stopping place with an exciting immersive experience showing the story of the soldiers life and hardships on a Hadrian’s wall fort. Here you’ll find a small cafe and shop.

2023 sees the starts of a new project here, a five-year research excavation at the Fort which was home to two of the most far flung Roman regiments to have served in Roman Britain, the Dalmatian mountain soldiers and the Syrian archers; even the names conjure up amazing stories from the past!

The Sill
A few miles east, The Sill, is a landscape discovery Centre which has recently opened very close to Hadrian’s wall. The first floor café sells local produce and has full length windows so you can enjoy a panoramic view. The fully accessible green roof is planted with wild flowers and plants from the local landscape, and there’s a permanent exhibition and Visitor Centre with shop downstairs. This is open year round and provides a great indoor stop for inclement weather. 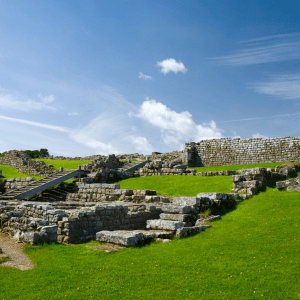 The fortification remains at Housesteads

Housesteads
The fort at Housesteads is the most complete example of a Roman fort in Britain, and one of the best-known in the entire Roman Empire. Its position high on a ridge gives an excellent view to the ‘hostile’ territory north of the wall.

Chesters Fort
The quaint Victorian style museum at Chesters fort has dozens of Roman inscriptions and altars which were collected by John Clayton. Clayton is known as the saviour of Hadrian’s wall because he bought and protected great stretches of the wall in the 1800s and most of that land now is in the hands of the National Trust.

Chesters also has the best preserved military bath house in Britain and it’s easy to imagine the soldiers sitting there chatting and cleaning themselves after a hard day’s work- not much privacy in those days! 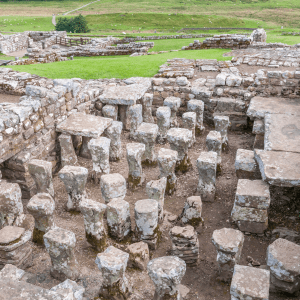 Corbridge Roman Town
Corbridge Roman town was sited at the junction of two Roman roads, Dere Street and the Stanegate, and provided a stopping point for weary soldiers on their journeys. The town of Corbridge grew nearby and is an excellent place to stop for modern day refreshments, with some great pubs and cafes in the village.

Arbeia Fort
Closer to Newcastle, the fort at Arbeia in South Shields provides magnificent reconstructions of a military Gatehouse and military accommodation, there’s a real contrast between the soldiers’ basic barracks and the grand opulence and décor of the Commanding Officer’s house.

Birdoswald Fort
Heading west, Birdoswald fort is easy access and has some fun family activities and you can explore the history of what happened in the fifth century after the Romans withdrew from Britain.

Tullie House Museum
And at the end of the wall, the Tullie House Museum in Carlisle showcases many rare and fascinating artefacts and The ‘Living wall’ display encourages visitors to engage with ideas and stories and see more contemporary examples of life on a frontier.

In short, Hadrian’s wall has plenty to discover and explore and there really is something for everyone!