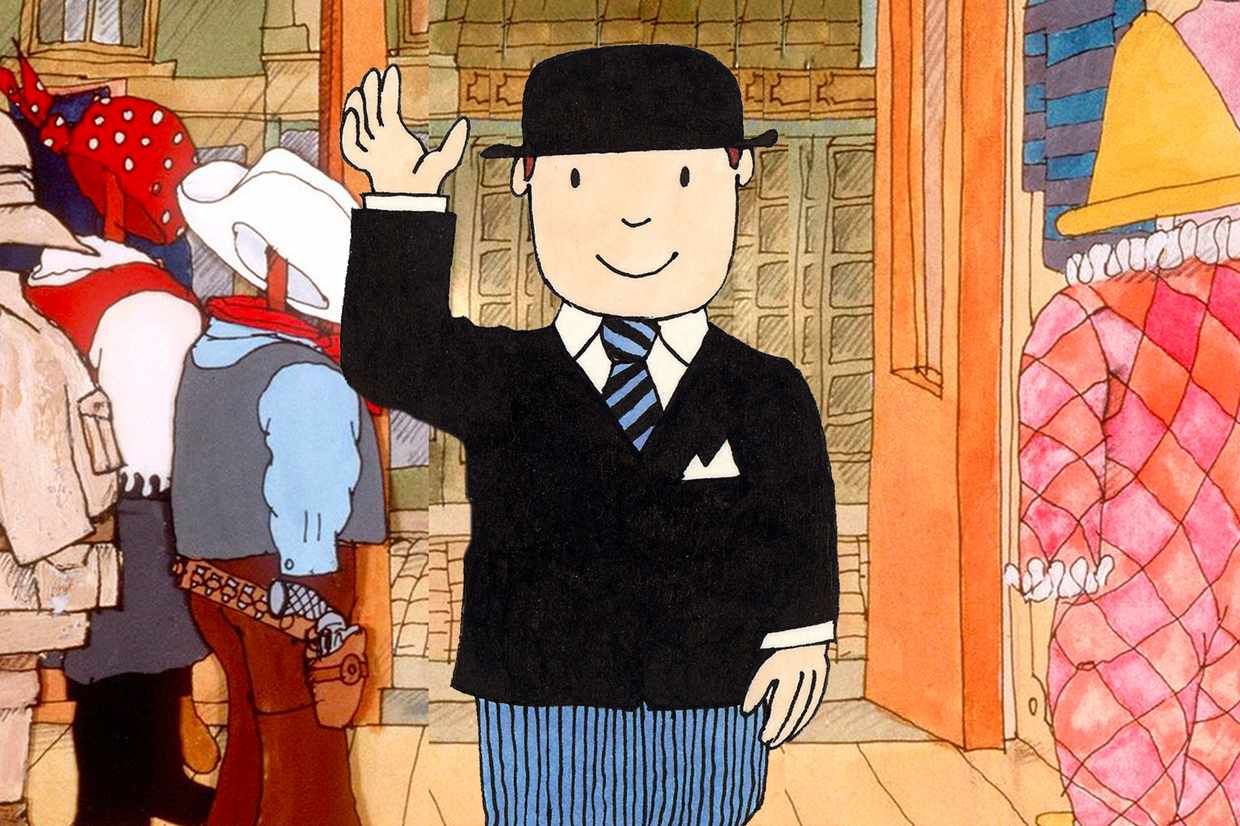 The 1970s was a golden age of children’s telly.  Much of BBC’s output was produced at Television Centre, on Wood Lane in Shepherd’s Bush. With its iconic 1950s rotunda – known to staff as the doughnut – TV Centre featured a statue to Helios, the Greek sun god at its centre. This was the beating heart of BBC broadcasting until 2013, when the Corporation sold up to help shore up a £2 billion shortfall in its budget by reducing its property portfolio. 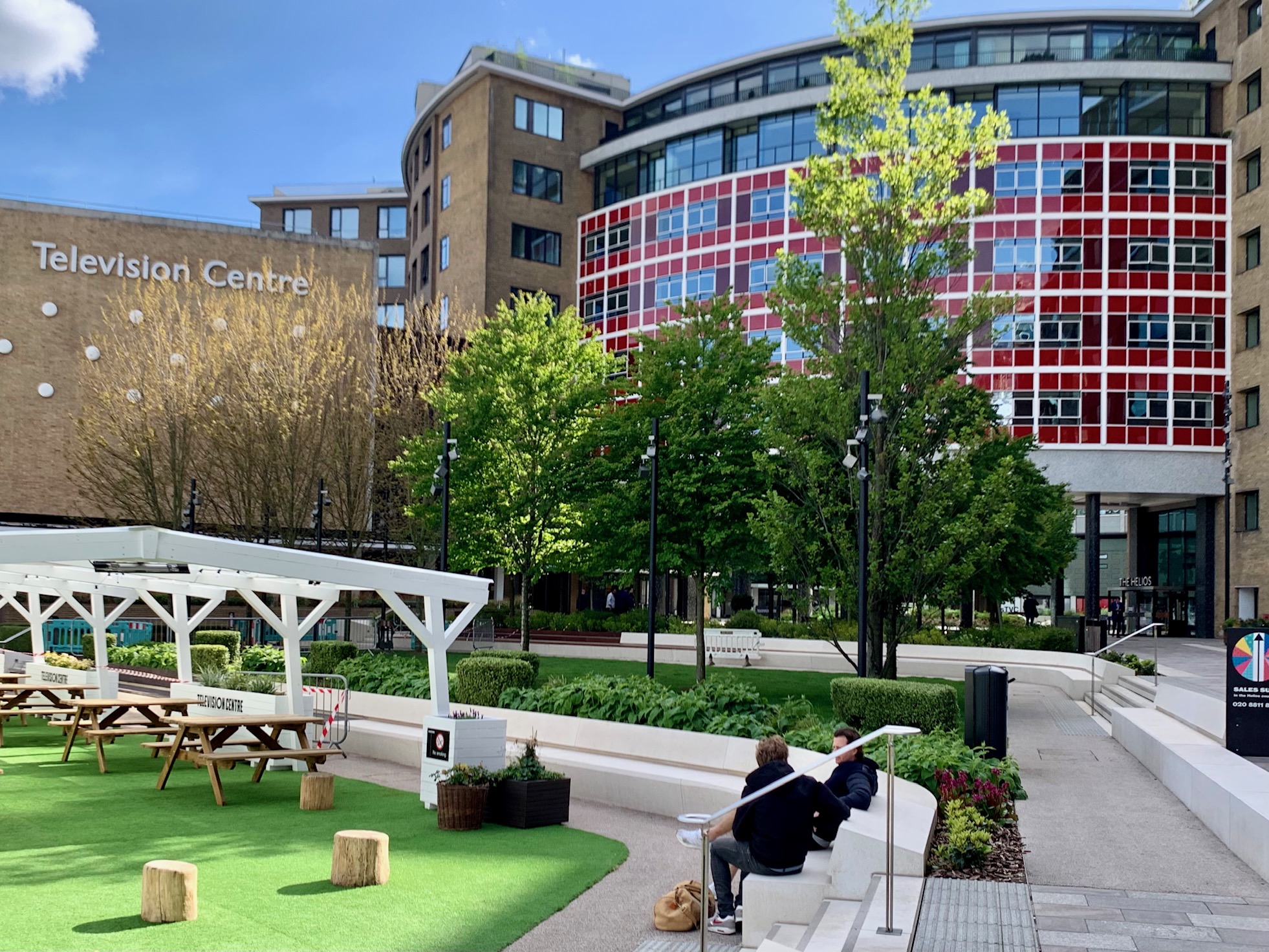 Cult classics like Dr Who and Mr Benn were made at the former BBC TV Centre in Shepherd’s Bush. @Meetmrlondoner.

Developers Stanhope PLC bought the estate for £2m. The purchase price was low to factor in the extensive removal of asbestos from across the 14-acre site. Stanhope re-developed and re-opened the former TV Centre it in 2017, with a commitment to pay homage to the original use of the property. The building is now mainly 1,000 luxury homes. Restaurants and leisure feature too, although the broadcaster continues to maintain three of its original eight studios. And Helios is still the centre-piece of the restored  and re-imagined mid-century architecture.

One of TV Centre’s most famous programmes was sci-fi series Dr Who. It featured shaky sets and evil outer-space monsters, including the terrifying Daleks and Cybermen. It became cult viewing. The Saturday-night programme so terrified the nation’s children that the phrase ‘watching from behind the sofa’ entered popular culture. 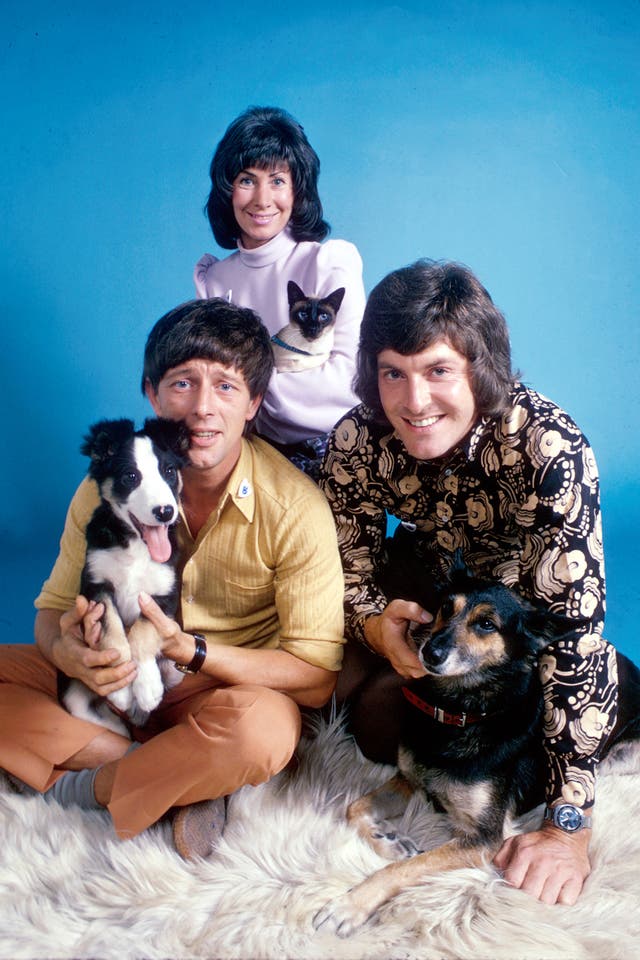 Also produced at TV Centre was Blue Peter. The programme regularly dispatched its daredevil presenters on down-right dangerous missions. Valerie Singleton was fortunate to escape injury during a power-boat crash on the Thames near Hungerford Bridge. I could hardly watch as John Noakes, always the most game of the talent’s line-up, scaled a series of old-fashioned wooden ladders to the top of Nelson’s column, just to clean off the pigeon poo in 1977. There were no ropes, nets or safety harnesses. Noakes was dressed in an army-surplus jacket and a pair of billowing flared jeans. Health and safety wasn’t a thing then. Whether the derring-do presenter was actually insured during these dangerous stunts remains a moot point to this day,

One I made earlier

Blue Peter is still going strong however, with over 5,000 episodes produced since 1958. It’s also given us famous catch-phrases, including ‘Here’s one I made earlier’. This was often used during items on the production of household crafts made from everyday objects – most memorably toilet roll tubes and plastic washing-up bottles.

Stop-motion animation (where action is captured one frame at a time) was pioneered during this period – with the BBC’s Clangers being a prime exponent. These knitted and cosy, out-of-space creatures were a comforting antidote to the deathly Daleks. BBC cartoons like Roobarb and Crystal Tips and Alistair had a decidedly psychedelic feel and were also broadcast from Television Centre. All of this output inspired a later generation of film-makers like Wallace and Gromit creator, Nick Park. 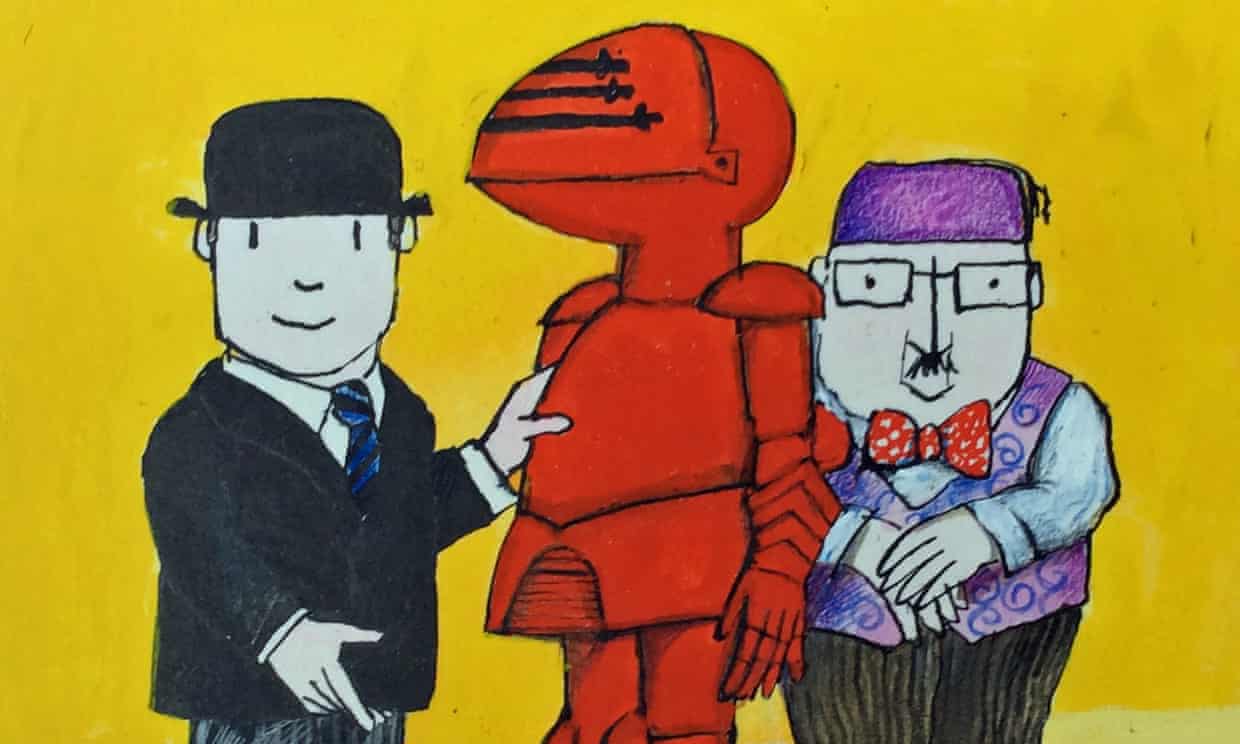 Mr Benn and the Shop keeper, created by David McKee.

Mr Benn was a much-loved cartoon character. He was a bowler-hatted everyman and famously lived at 52 Festive Road. The location was inspired by the Putney neighbourhood of Mr Benn creator David McKee, who lived at 54 Festing Road. McKee changed the name because he felt the association with ‘festering’ was a tad unfortunate. He decided Mr Benn should inhabit Number 52, because, as he explained, ’It would be nice to have him living next door’. 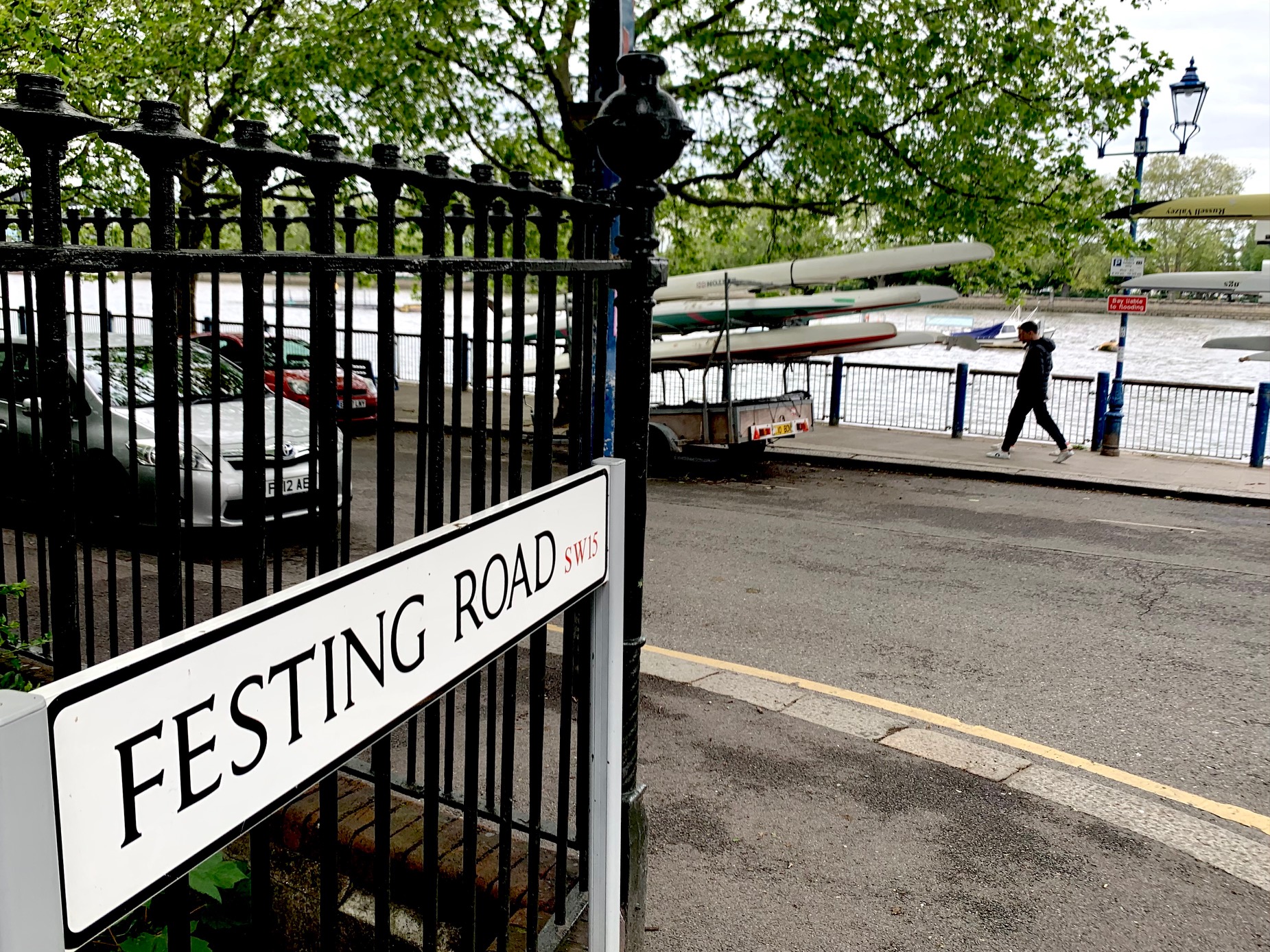 There were 13 quarter-of-an-hour episodes of Mr Benn who, on each adventure, stepped into the mysterious fancy dress shop on Festive Avenue. Here Mr Benn was transformed into a knight-in-armour, a cowboy, a clown or another character. With each costume, his extraordinary adventures involved him being transported into another world through the shop’s magic portal. The Roman era; the Wild West and African jungles all featured. Each journey featured themes of kindness, understanding and inclusion and there was always a moral in the tale. Mr Benn’s Adventures ended when, ‘as if by magic’ the fancy dress shop owner appeared and they both returned to the shop together. Mr Benn usually walked back home along Festive Road, finding some small memento of his trip buried in his pocket. 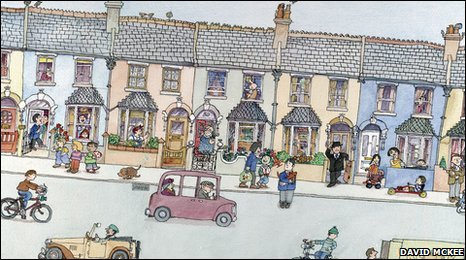 Online fashion brand Mr Porter used Mr Benn to promote one of its Christmas campaigns – check the video below!

Mr Benn aired during the post-lunch Watch With Mother slot on BBC1 and McKee consciously wrote for both a younger and an adult audience. Perhaps that’s why the little films stand up so well today.  The themes of thoughtfulness and compassion are universal. In one episode Mr Benn persuades a big game hunter to swap his gun for a camera. Ideas for our times indeed.