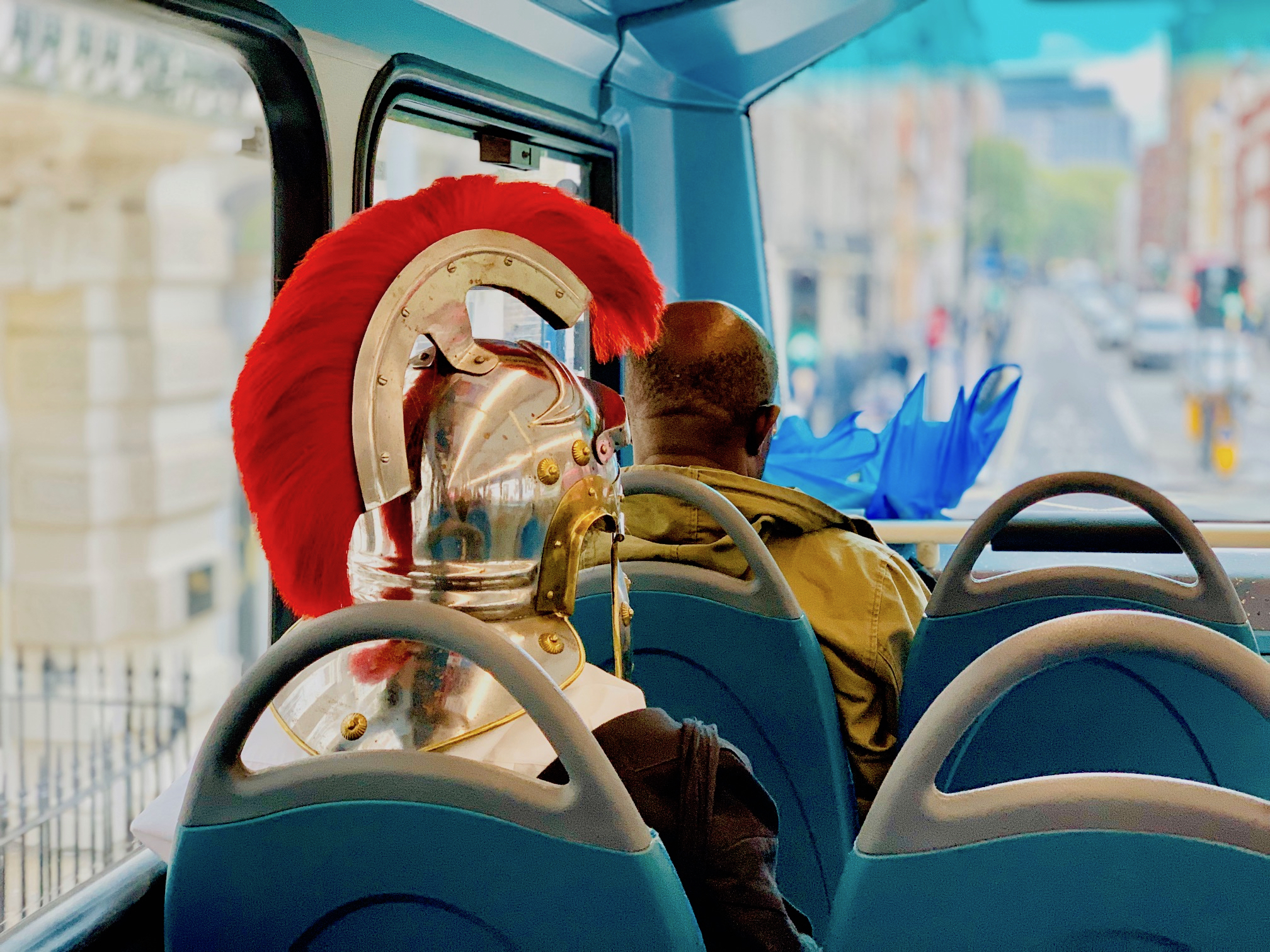 Look at any photograph or film of London crowds in the first half of the 20th century and almost everybody wore a hat. People looked elegant and purposeful in toppers (top hats for the posh) Bowlers or Cokes (Derby hats for the clerks and middle managers) and the simple but functional cloth cap – worn by men across the class spectrum. 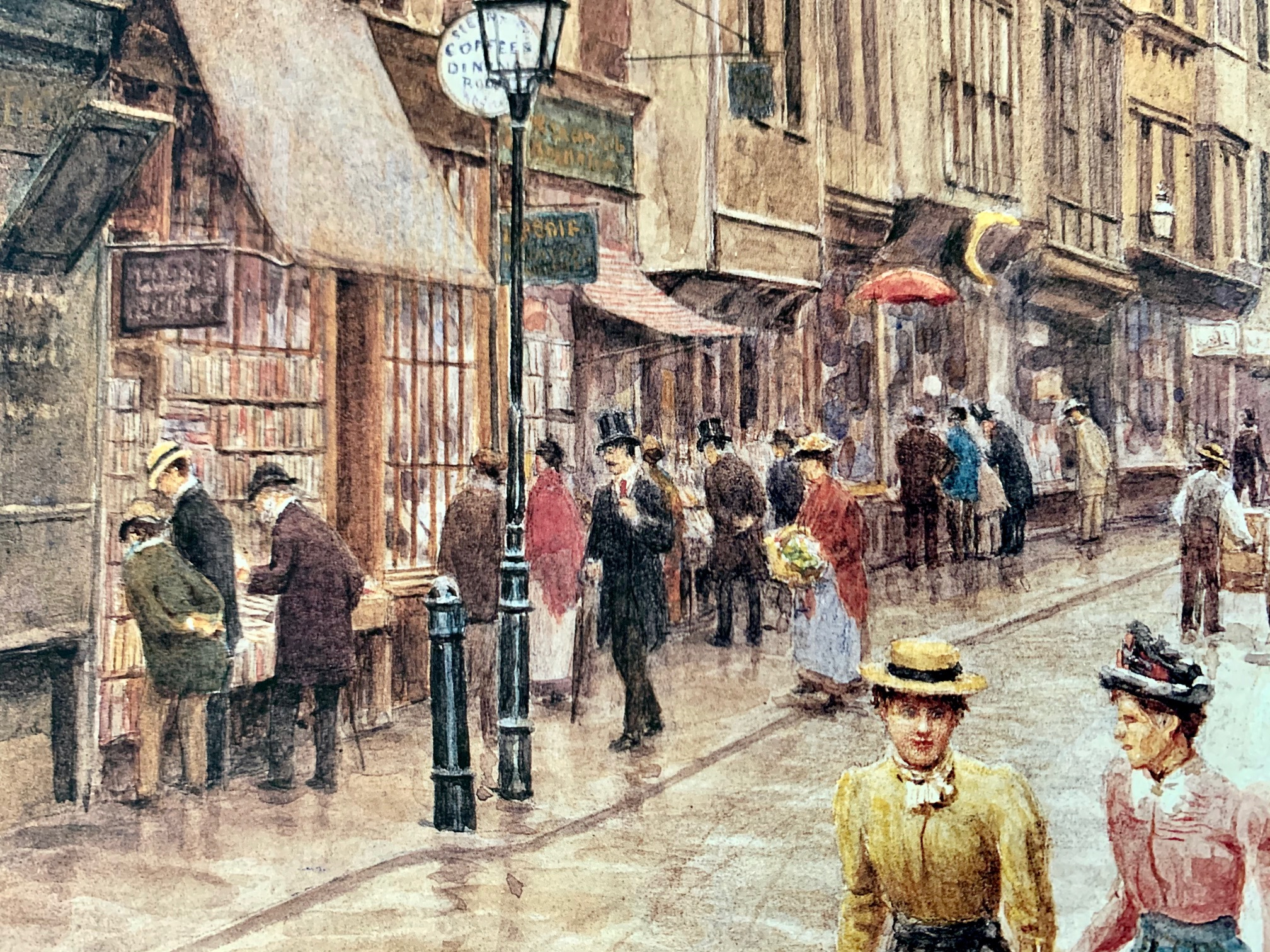 Today it’s a rather different story. Hats haven’t exactly disappeared, but they’ve certainly become more utilitarian. A common sight are men and women in hard hats. These are the construction workers, architects and engineers – working on London’s myriad capital projects. Equally necessary are cycle helmets. Ugly though they are, I’d advocate wearing one on London’s roads.

Other than the beanie, that leaves the ubiquitous baseball or trucker cap – beloved of teenagers and tourists alike. It’s said, if you want to discourage your kids from getting a tattoo, then you should get one yourself. By the same token, now that almost every middle-aged man owns a baseball cap, it’s perhaps surprising the style remains quite so popular among the young.

Most men tend to be innately conservative dressers. Sporting a beanie, baseball or trucker cap is the perfect way to fit in. It tends to be older men who opt for more distinctive headwear. You might put this down to confidence coming with age and no longer needing to run with the crowd. A less charitable interpretation is that gents’ hats become more significant as our hair becomes less so. 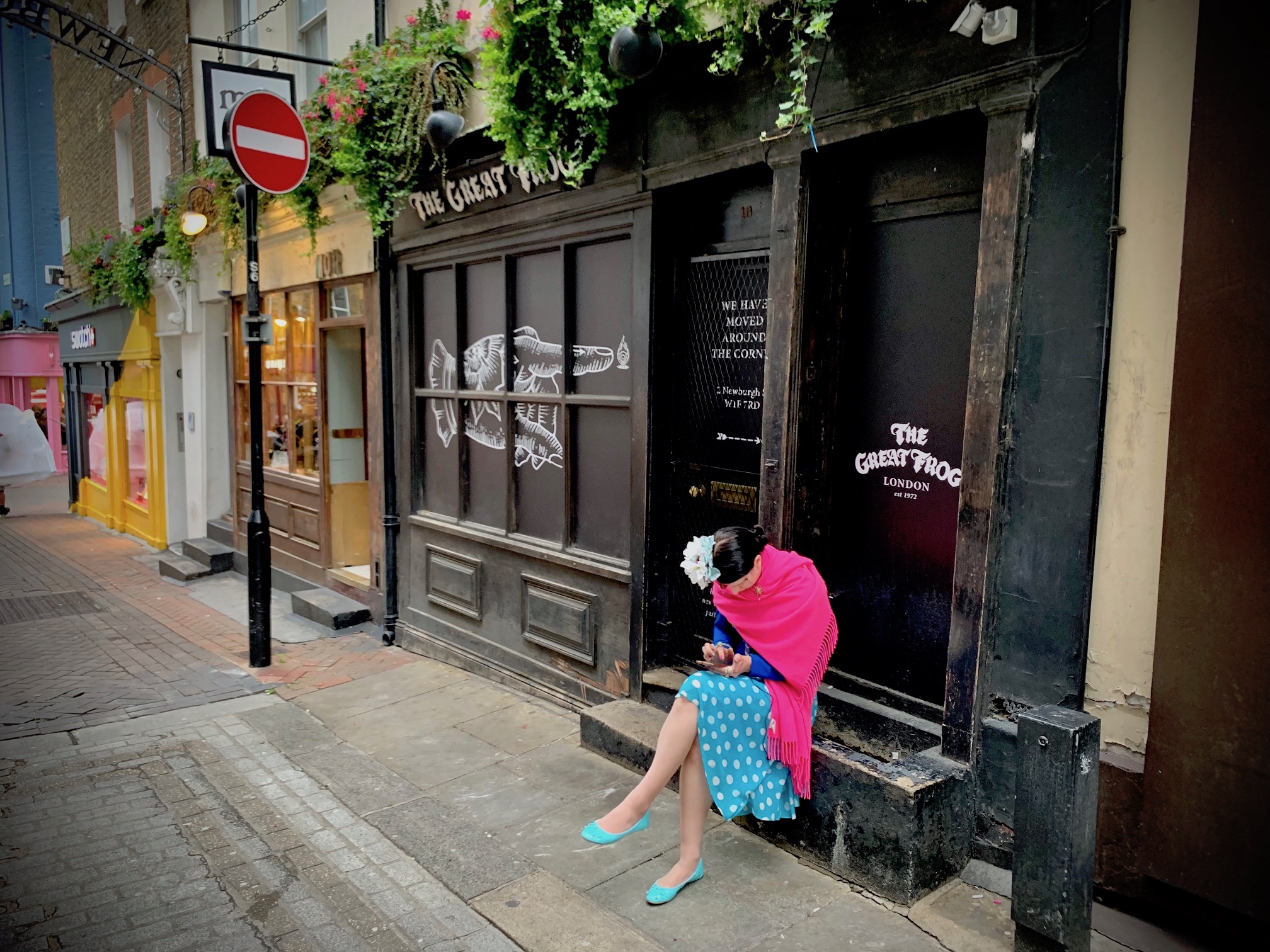 Fascinating. The women of Soho are no slackers on the hat style stakes either. Image by @Meetmrlondoner

London still has a handful of makers each with a loyal following. Christys, with its distinctive gold and red logo, dates back to 1773. It sells stylish headwear from fedoras to tweed caps at a mid-price point, through stores like Liberty of London. Lock and Co Hatters in St James’s Street is perhaps London’s most famous hat-maker, with prices to match. It’s been going since 1676 and it’s the world’s oldest hat shop. Beau Brummell, Winston Churchill and David Beckham have all shopped here. 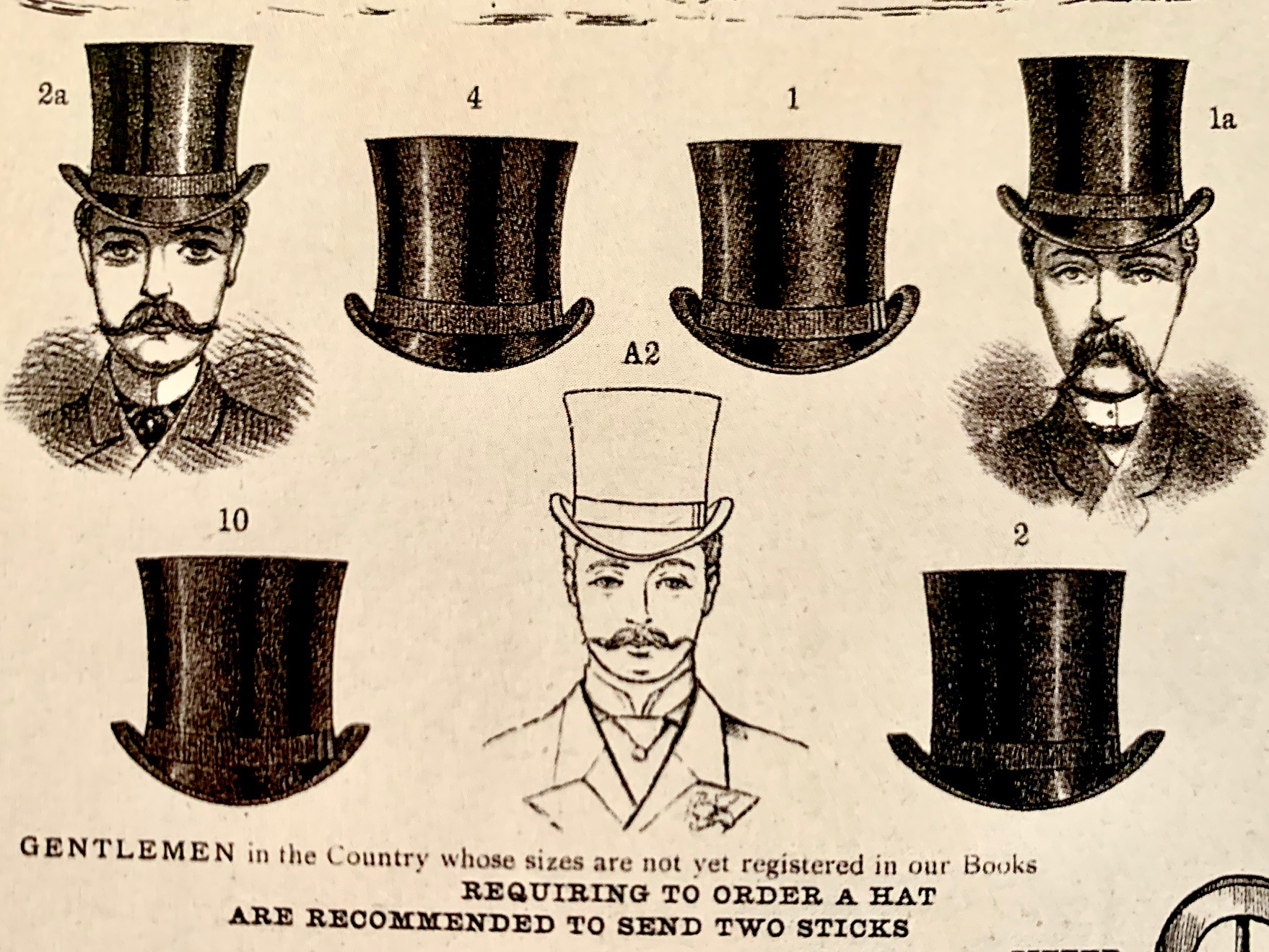 Horatio Nelson purchased his famous bicorne hat (a popular style for 19th century European and American naval officers) here. He wore it at the Battle of Trafalgar. Nelson’s bespoke version had a built-in eye patch. The admiral famously lost his right eye in a 1794 naval engagement at Calvi during the French Revolutionary Wars. 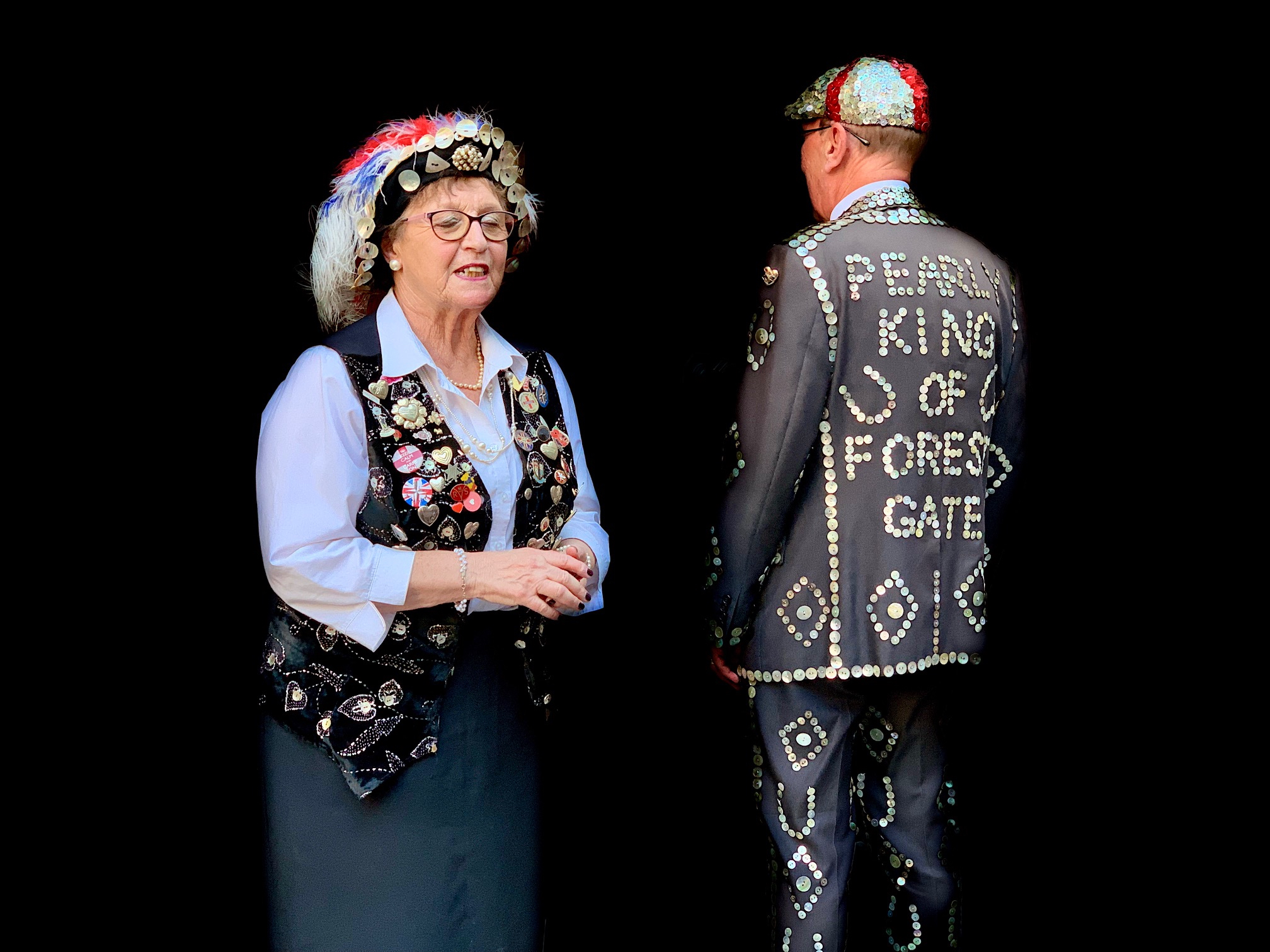 The story of London’s hat-making has sadly become lost in time. Few of the residents of modern-day Wandsworth in south-west London would know of its early connections to the industry. The neighbourhood sits on the River Wandle, a tributary of the Thames. During the 16th century (and for the next two centuries) the Wandle was famous for its watermills. Most of these produced flour, but one manufactured a vivid red dye from Brazil wood. This was much in demand by local hatters and dyers who sold their wares to cardinals in Rome. Wandsworth thus became famous for its headwear across Europe. 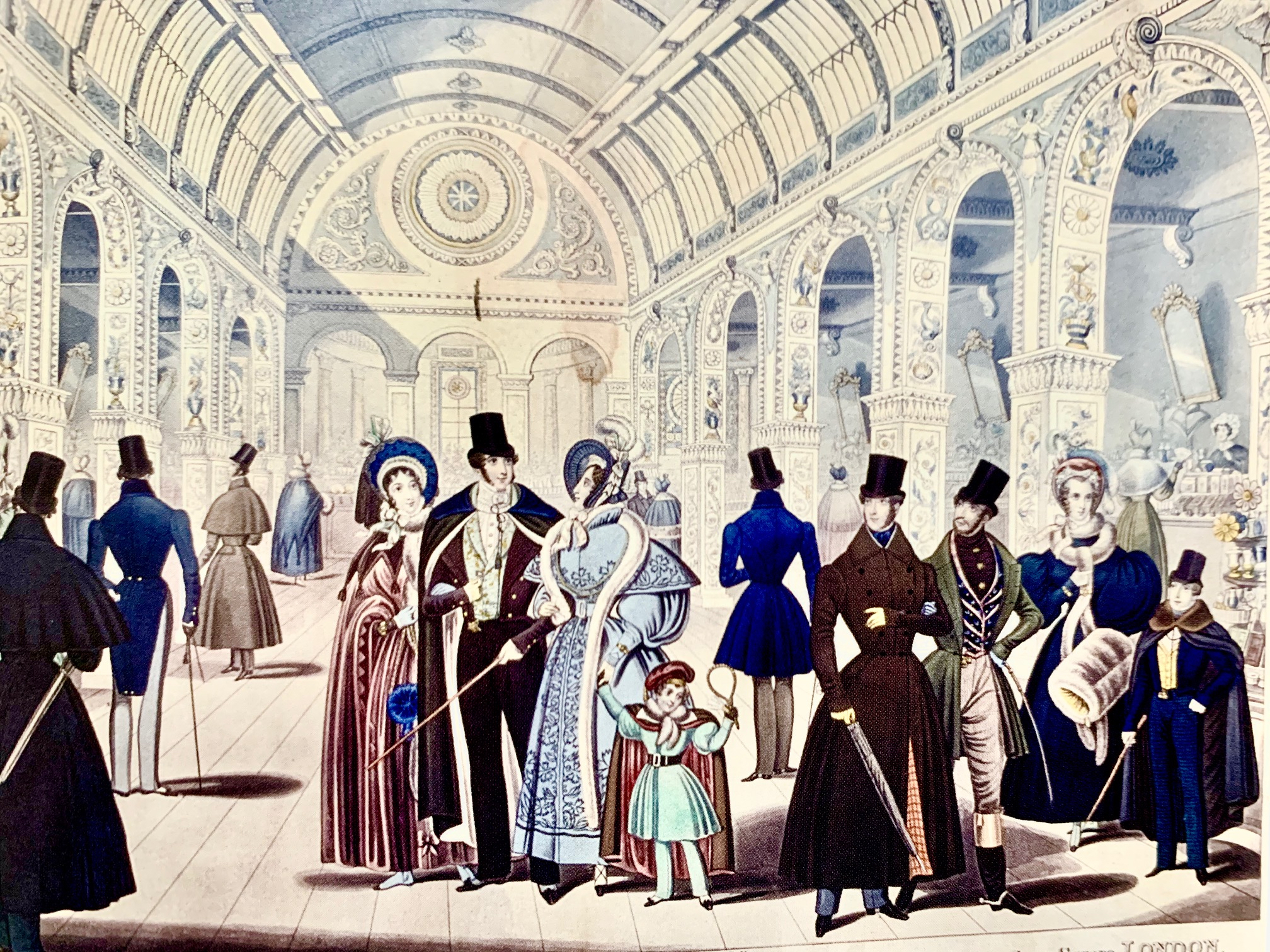 A View in the Pantheon London. Winter Fashions from November, 1834. Published by Benjamin Read. Credit – Museum of London.

With developments in technology and industrialisation, the industry grew, supported by a wide global market in Britain’s colonies. Despite imperial expansion, the lives of those in the hat-making industry of the 19th century were however nasty, brutish and short. Mercury and other toxic chemicals were used in felt hat production. Its impact on workers’ lives was serious and permanent, producing dementia-like symptoms. Hence the Mad Hatter character in Lewis Carroll’s Alice in Wonderland.  Written in 1865, Carroll was well aware of the heavy toll this industry took on the lives of poorly-paid Victorian workers. 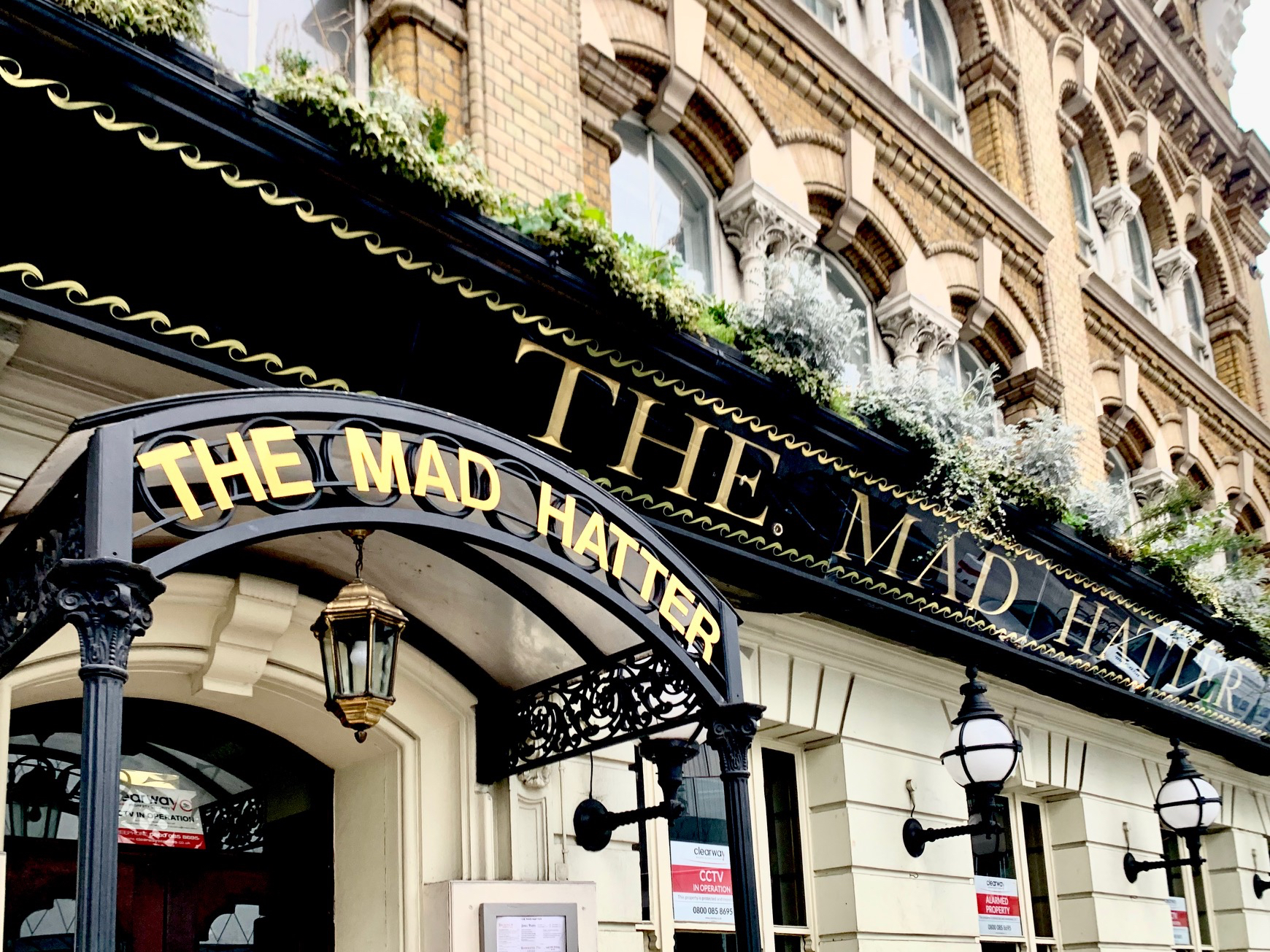 Many of the capital’s smelly and toxic industries were confined to its southeastern corner, around Bermondsey and Bankside. These trades included engineering works, brewing, tanneries, vinegar-making and hat-making. The prevailing westerly winds kept the foul odours away from the wealthy enclaves of political Westminster, courtly St James’s and aristocratic Mayfair. Hatfields, in Southwark, was a centre for hat-making. Hatfield Green, now a pleasant public park, was once full of hat factories and warehouses. The nearby Mad Hatter pub on Southwark Street recalls the area’s industrial past.

Perhaps, when you think of London’s hats, you think of the guardsmen at Buckingham Palace in their bearskins. Guards’ regiments have worn the hats since the 1815 Battle of Waterloo. Soldiers’ bearskins (called caps by those in the know) measure 18 inches and weigh in at a hefty 1.5 pounds. They are still made from the pelts of Canadian black bears and one entire skin is required per cap. Officers’ headwear is made from the plusher, fuller pelt of the Canadian Brown bear. Recent moves to end the practice of wearing animal skins on ethical grounds have gained pace. Guards’ regiments have experimented with artificial pelts but soldiers, alas, still currently sport the real thing. 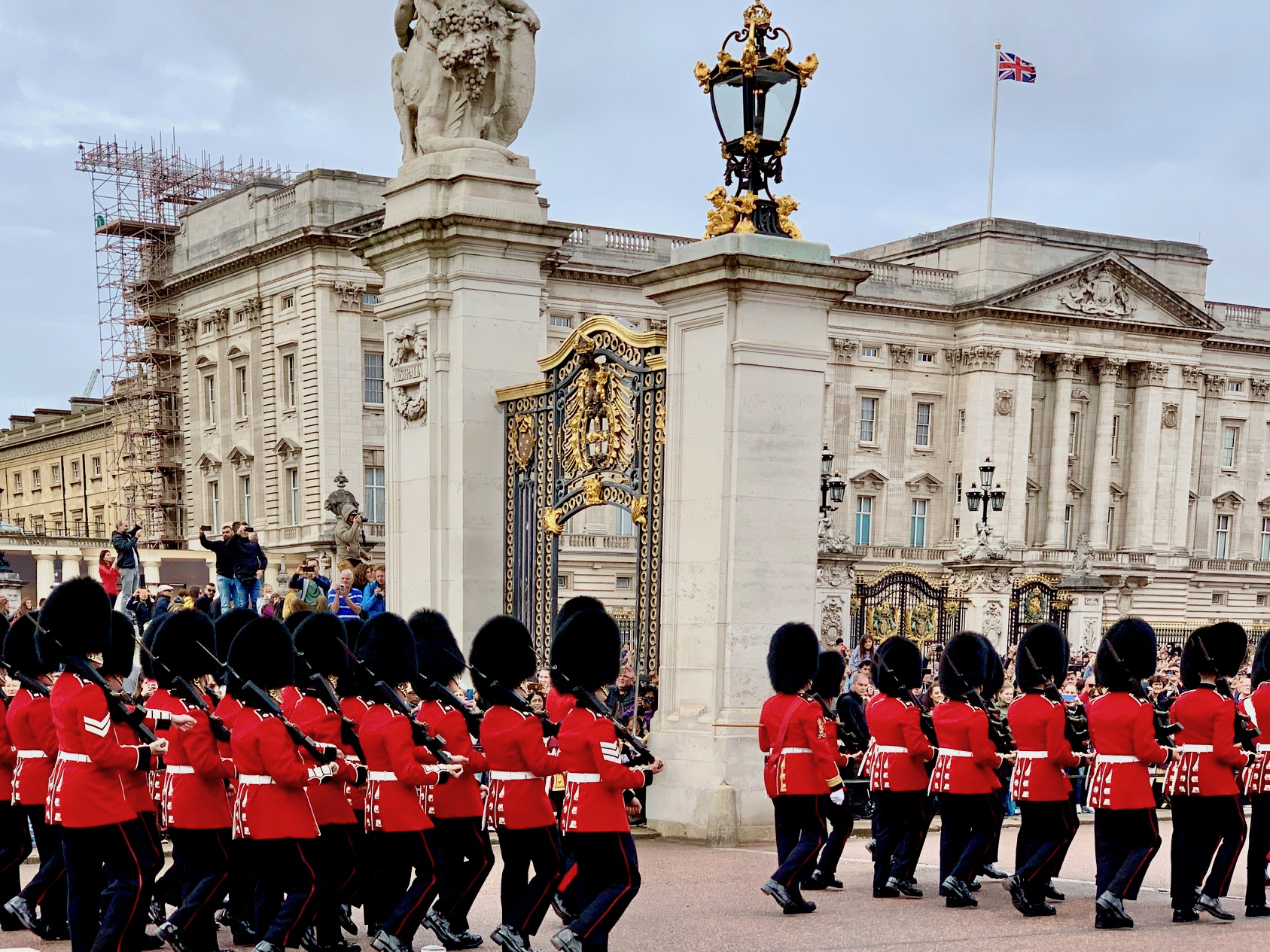 Changing the Guard at Buckingham Palace. Image by @Meetmrlondoner

Final mention should go the hats worn by the Beefeaters (or Yeoman Warders to give them their proper name) who guard the Tower of London. The origins of their headwear go back to the 16th century. Take my advice when discussing this particular item with the beefeaters in person. Never describe their headwear as … a bonnet.

Featured image: @PPE. In one of London’s more unusual sites a passenger on the Number 19 bus wearing Roman helmet. Image by @Meetmrlondoner