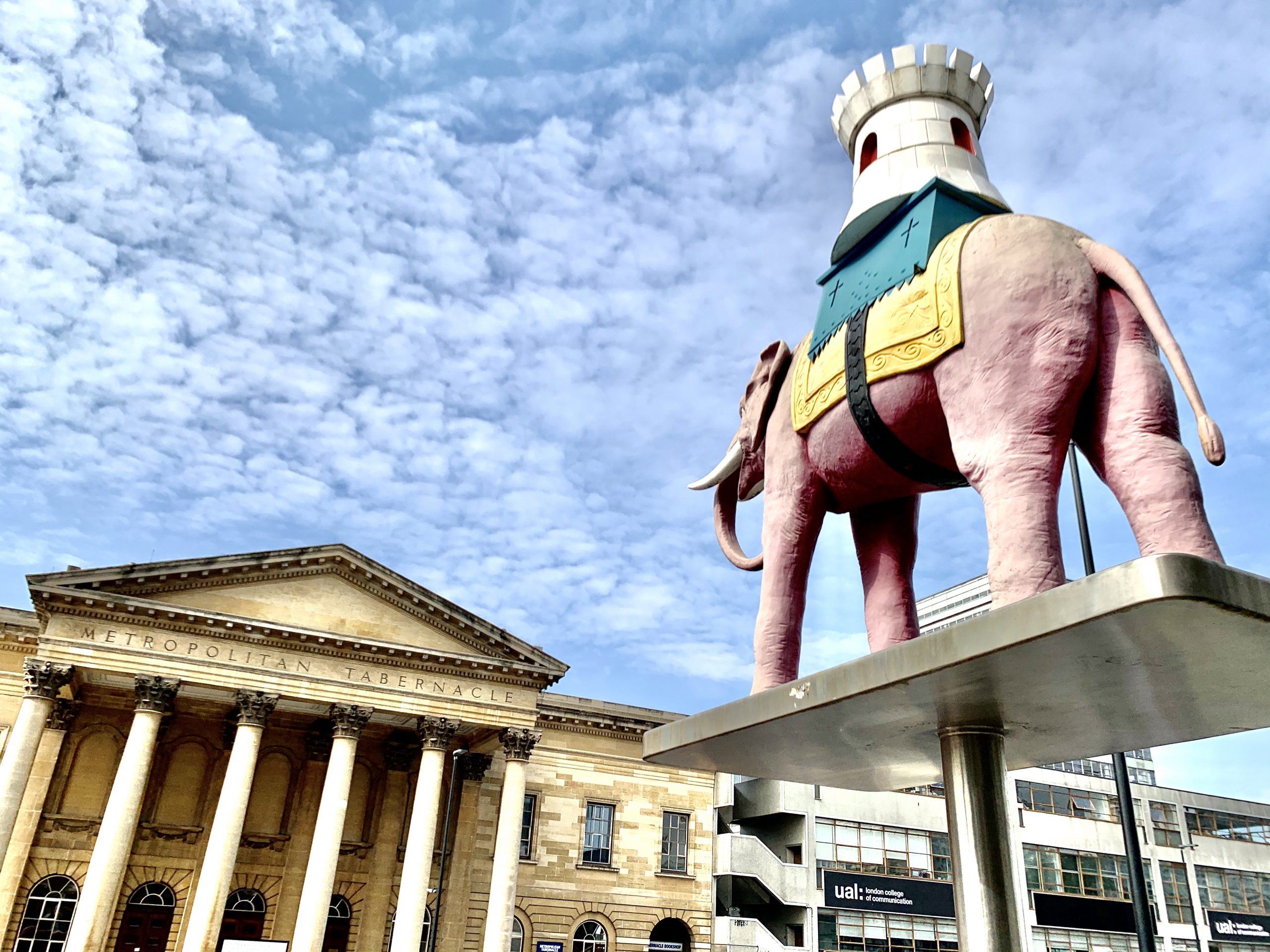 The Elephant and Castle  – ‘called ‘the Elephant’ by Londoners – sits south of the river about a mile from Westminster Bridge. It’s been a chaotic traffic junction since the 17th century, sitting at the confluence of major coaching routes in, out, and across the city, connecting the neighbourhood with south and south-east England – and the continent beyond.

The area was devastated during the World War Two Blitz and was re-built in the early 1960s around two roundabouts (traffic circles). The 60s Elephant and Castle shopping centre was designed by husband-and-wife team Paul Boissevian and Barbara Osman. It was one of the largest purpose-built indoor retail malls in post-war Europe. It had its detractors and its fans too but, after 55 years, closed in October 2020. It’s currently being demolished to be replaced by retail and residential accommodation and to create new facilities for the London College of Communication. 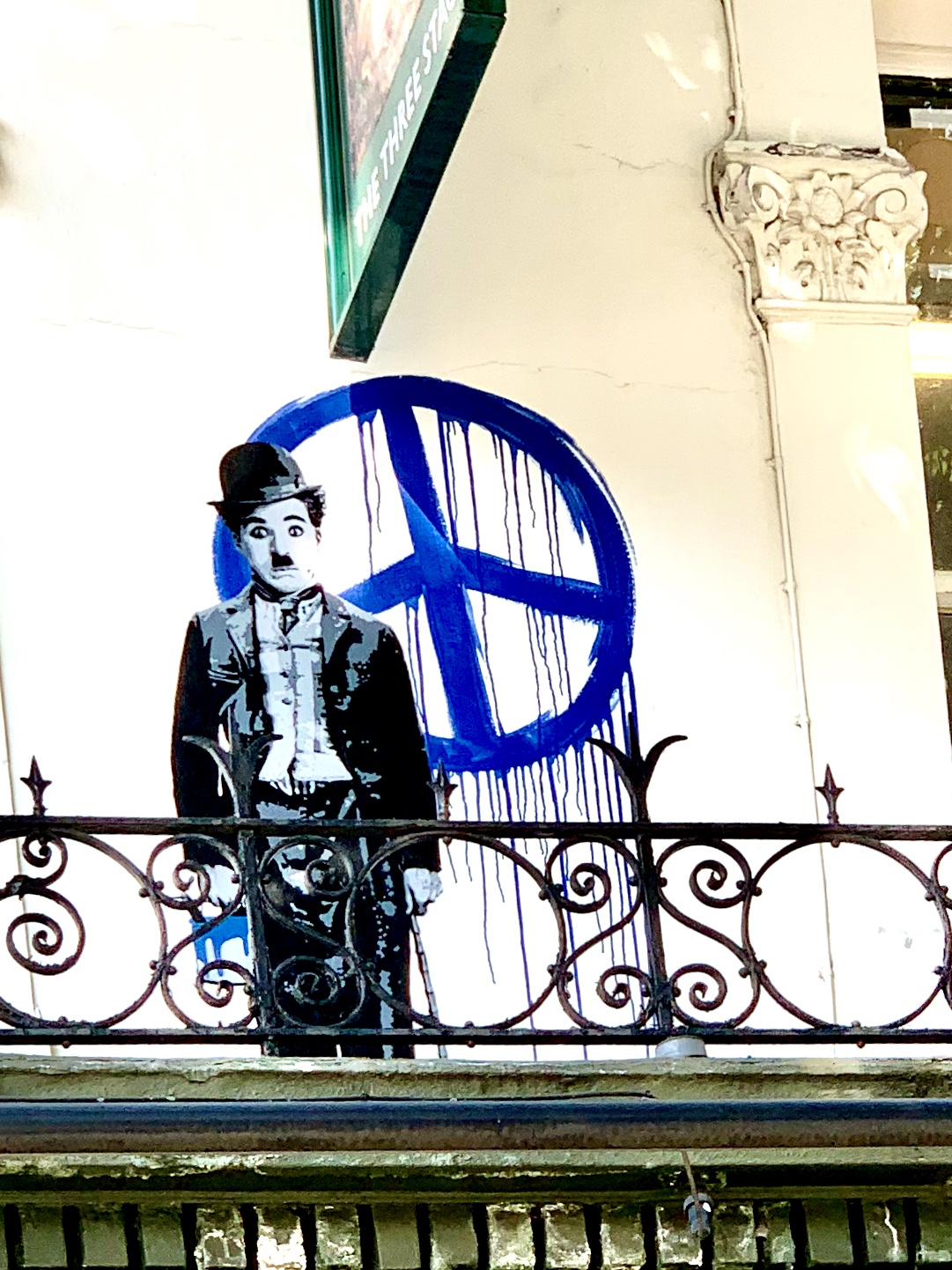 Local Hero. Charlie Chaplin was born down the road. Image by @Meetmrlondoner

The noisy and dusty building site rather dominates the current landscape. But look beyond the traffic, the scaffolding and the demolition …and the area harbours some rare hidden gems. They include beautiful green spaces, striking architecture and the legacy of some of London’s leading historic figures, including Charlie Chaplin, who was born nearby. And within walking distance are some of London’s very best attractions – including Borough Market, the Tate Modern Gallery and the Imperial War Museum. 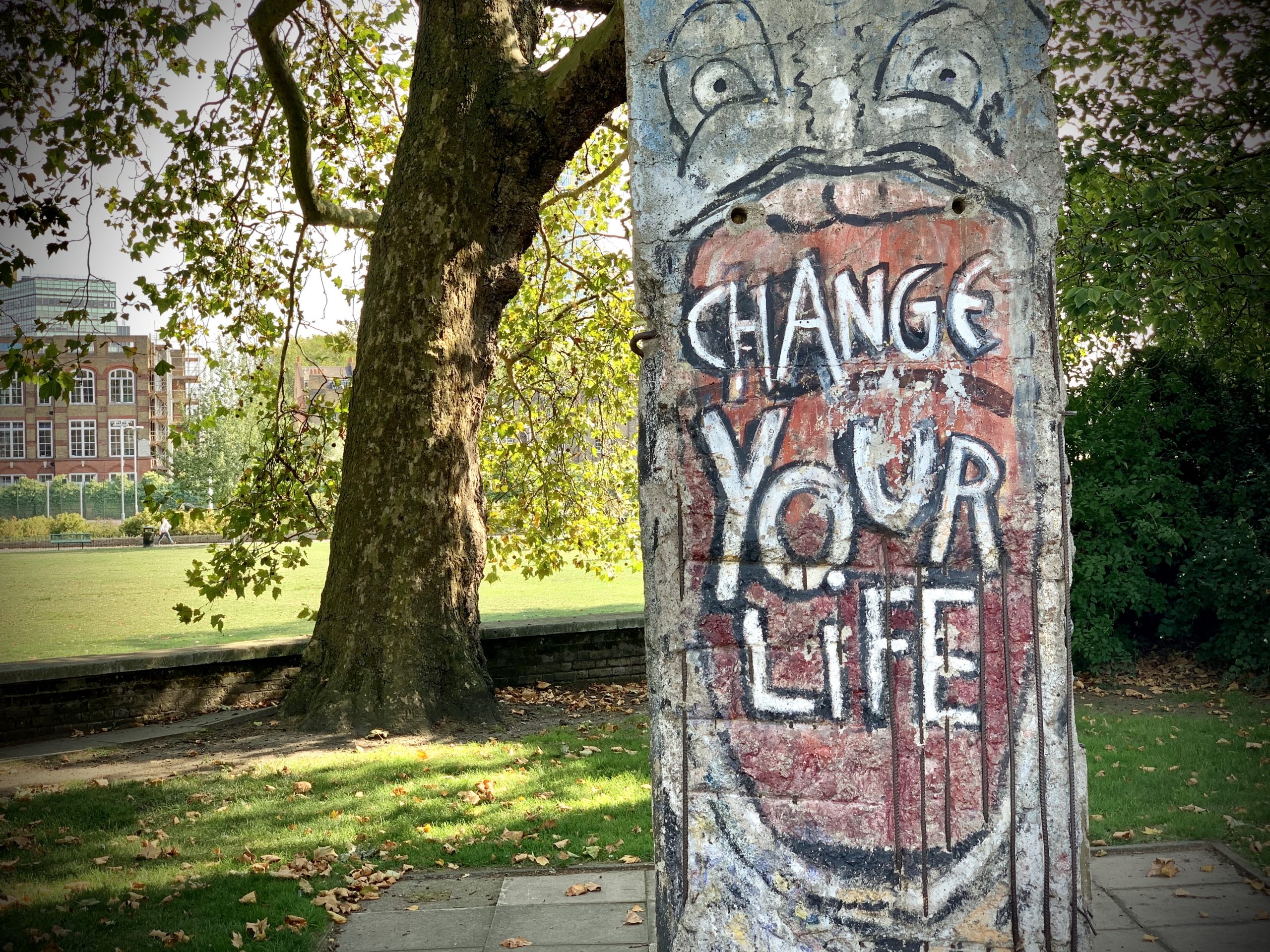 A chunk of the Berlin Wall outside the nearby Imperial War Museum. Image by @Meetmrlondoner

What’s in a name?

The neighbourhood’s curious name is shrouded in mythology, but the most likely explanation for its strange moniker is the Elephant and Castle smithy (or blacksmith), which became a tavern in 1760. The blacksmith may have taken its name from the mighty Cutler’s Company, which made swords and tools – and also dealt in ivory. Another popular theory is that the name relates to the Infanta of Castile, mistress of King Charles I. Or it may simply relate to ancient heraldry, where an elephant is always shown with a castle on its back. This is also why some chess sets have elephants with castles on their backs. 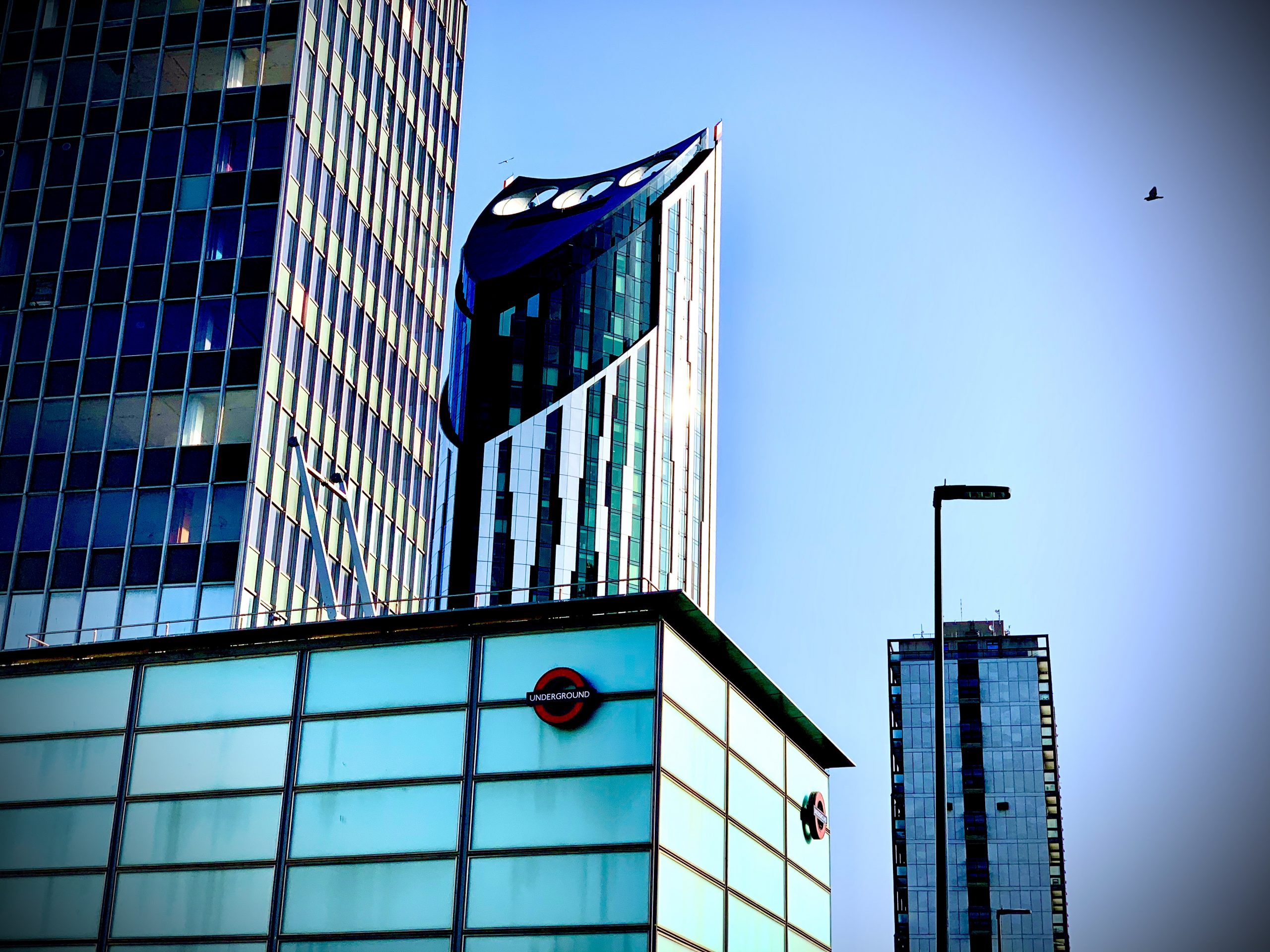 Until the middle of the 17th century the area was part of Surrey and very much in the countryside. Small-scale industry existed, including the making of clay pipes. Tobacco became increasingly popular. It became cheaper with the success of British tobacco planters in the Jamestown Colony,  growing this new cash crop in ever greater volumes. The Elephant’s fortunes improved however with the building of Westminster Bridge, connecting it to Parliament, just over the river,  and to the heart of the now-fashionable and prosperous West End of London. It received a second boost with the arrival of the railways, sitting as it does between London Bridge and Waterloo stations. This connected the neighbourhood to Surrey and the south-west, and to Kent (the Garden of England), the south-east, France and beyond.

The elephant has some impressive scientific connections. Michael Faraday, the Father of Electricity, was born here to a working-class family in 1792. He discovered the principles of electro-magnetism. Without Faraday there would be no microwave oven and no mobile phones. Imagine that. Along the way Faraday invented the Bunsen burner and discovered benzene. He also popularised the use of the terms ‘anode’, ‘cathode’ and ‘ion’. For a man with little formal education Faraday’s contribution to modern science is just phenomenal. He is remembered in one of London’s strangest memorials – the space-age looking silver cube in the centre of ‘Elephant Island’ – the busy traffic island, which dominates the neighbourhood. It could be mistaken for a futuristic-looking if somewhat battered electricity sub-station. Most of the people passing it have no idea that it’s even a memorial. 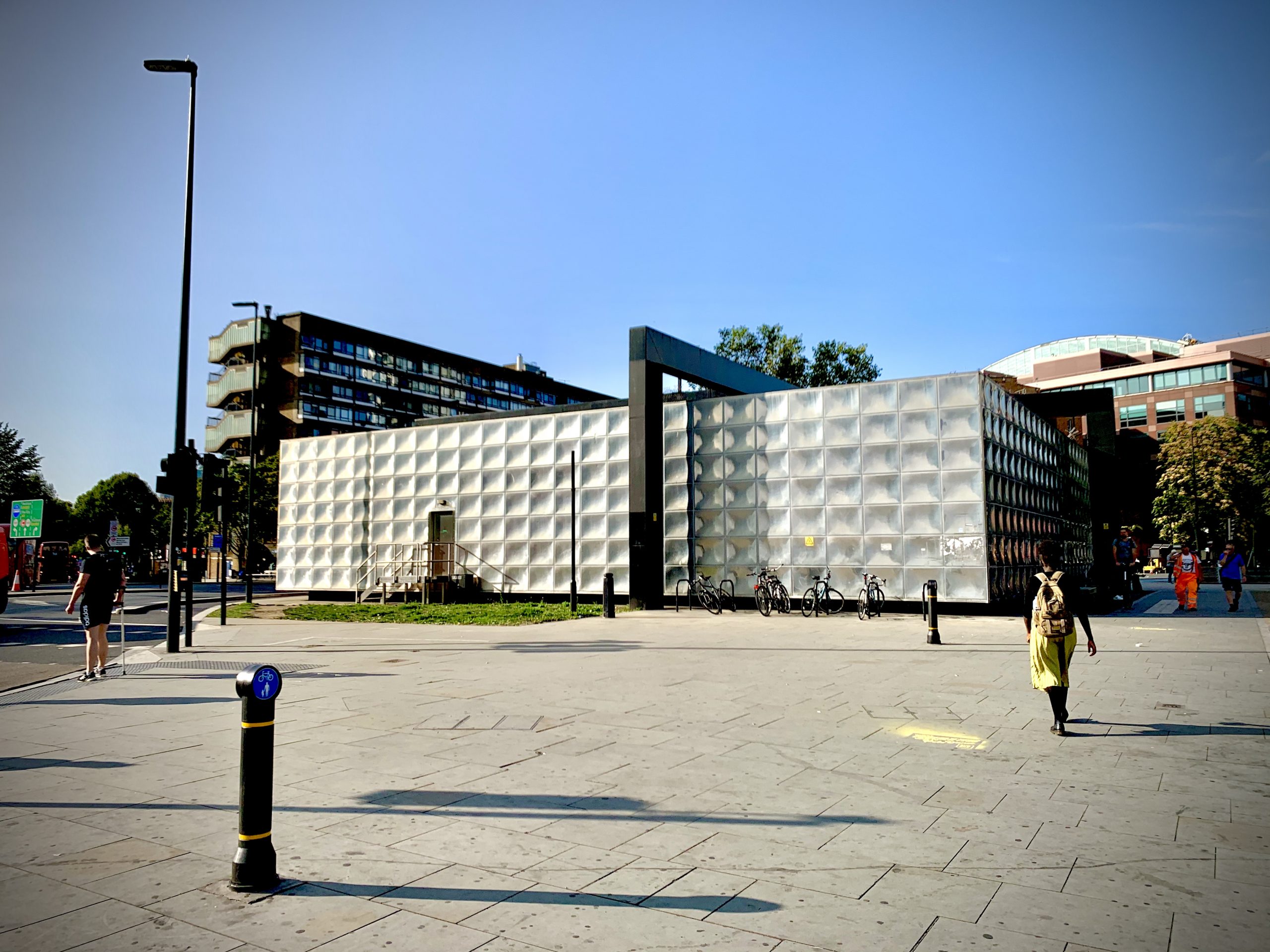 The unlikliest of memorials. Farady remembered on Elephant Island. Image by @Meetmrlondoner.

Charles Babbage, inventor of the Analytical Engine. Just as Faraday if the father of electricity, Babbage is considered to be the father of the computer. He was also born here in nearby Crosby Row, just three months after the birth of Faraday.  You can see some of Babbage’s machines at the Science Museum, in South Kensington. 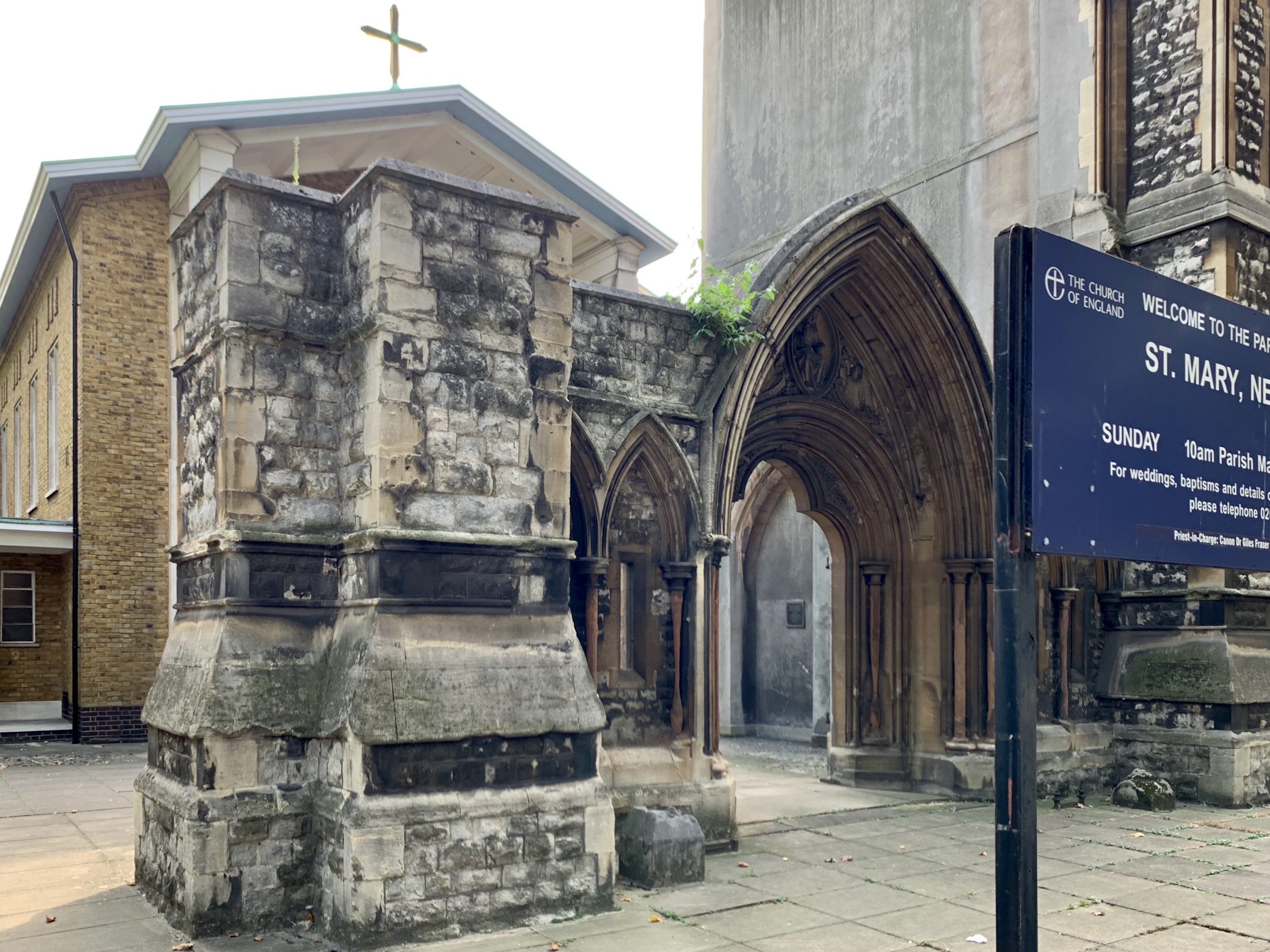 All that remains of the original St Mary Newington. Image by @Meetmrlondoner

Babbage was baptised at the nearby parish church of St Mary’s Newington. It’s a curious survivor (of sorts). The Gothic Revival church was built by James Fowler in 1876 but almost totally destroyed in the Blitz on 10 May 1940. Re-built in the 1950s, its original gothic portico still stands as a poignant reminder of the bombing and those who lost their lives here. The current priest is the Reverend Giles Fraser, something of a polemicist and controversial figure, famous for his outspoken and provocative political views. Just along the road from St Mary’s is the huge open space of Kennington Park. Opened in 1854, it was once Kennington Common. Beautiful and peaceful today, it has a dramatic past as the site of both mass gatherings and – until 1800 – public executions.

Opposite the Faraday memorial is the former Ministry of Health building, now residential accommodation. Built in the stark 1930s Modernist style, the architect was Erno Goldfinger, who created the now-listed Trellick Tower in West London and the Balfron Tower in East London. People love his architecture today. Goldfinger was a Marxist. It’s said he was a rather humourless man who inspired 007 author Ian Fleming, an avowed conservative, to name one of his best Bond baddies after him. 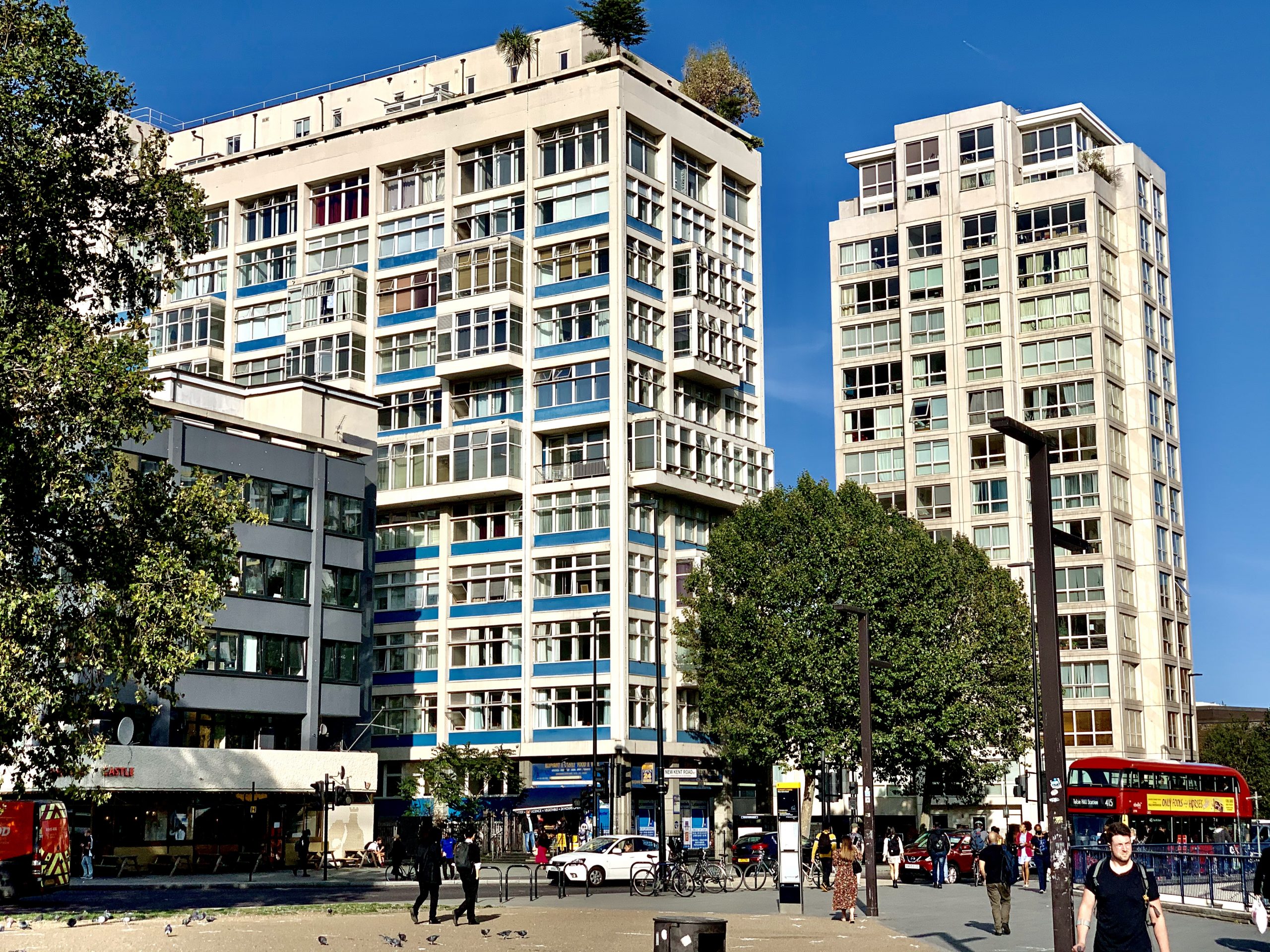 Fans of the BBC and Netlix series Peaky Blinders will enjoy the story of the Forty Elephants, aka the Forty Thieves. This was an all-female gang based in the locale and active across London from the 1890s to the 1950s. The Elephants were led by the aptly-named Alice Diamond, who was born in the local poor house. The gang specialised in robbery and shoplifting. They posed as housemaids to steal jewels and robbed wealthy men they befriended. They dealt ruthlessly with competing criminals and usually managed to out-run the law too. As they grew in strength and number they acted with increasing confidence and swagger, dressing in the latest ‘flapper’ styles and frequenting fashionable hang-outs.

Shaped by roads and bridges, transformed by rail, destroyed by bombs and re-invented ever since by architects and planners, the Elephant may not at first be an obvious London destination. Dig a little deeper however and you’ll find a fascinating secret history of the people who made this neighbourhood well worth a second look.