What a lovely evening we had! Absolute pleasure to take eleven joggers from the Sunderland Strollers Running Club around the many memorials and sculptures of the historic City of Durham. 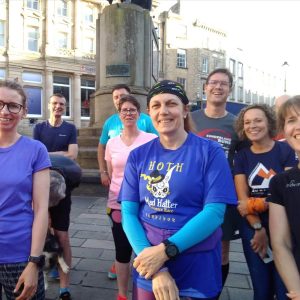 We started the stroll at the incredible geological map of Britain & Ireland, outside the Bill Bryson Library at Durham University. The map is made from the actual rocks that make up the British Isles; the earliest rocks in the UK date back to the Proterozoic eon spanning the time interval from 2500 to 538.8 million years ago. 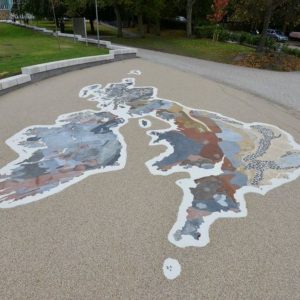 The geological map of Britain & Ireland at the Bill Bryson Library, Durham University

We then went down to the river to Prebends Bridge which, along with Flamwellgate and Elver bridges, is one of three stone-arch bridges in the centre of Durham that cross the River Wear. From here we took in the glorious view of Durham Cathedral. 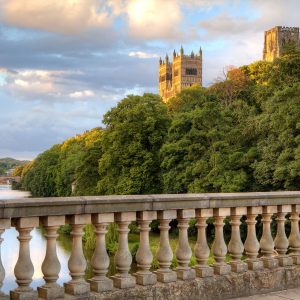 At Prebends Bridge there is a plaque displaying Sir Walter Scott’s words about Durham:

Yet well I love thy mixed and massive piles

Half church of God, half castle ‘gainst the Scot

And long to roam these venerable aisles

With records stored of deeds long since forgot

Along the Bailey we stopped to see a couple of other plaques including the one at the Church of St Mary the Less to Dame Elizabeth Bowes (1651-1736). Dame Elizabeth lived in Durham and is an ancestor of Elizabeth II. St Mary The Less is a chapel of St John’s College and has been used for College services only since the early 20th Century. The College has now opened the chapel to visitors and tourists and is a quiet space for reflection. 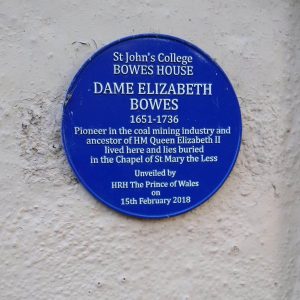 Our stroll then took us up to the Cathedral and Castle, where I recounted the story of the Dun Cow before going down to the Bastion tower, the last remaining part of the enormous North Gate. 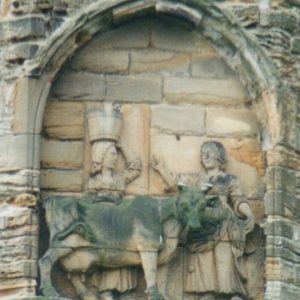 Of course, no tour of Durham would be complete without seeing the controversial “Man on the Hoss” statue in Durham Market Place. 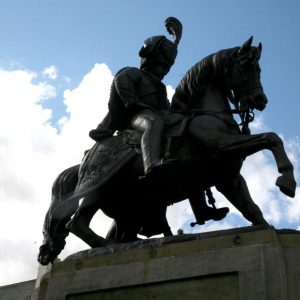 Statue of “Man on the Hoss” at Durham Market Place

Onward and downward we flew to the first bridge over the Wear. Framwellgate commissioned by Bishop Flambard, was the first man to be imprisoned and the first to escape from the Tower of London.

We took the steps to the river then up the Georgian backstreet of side gate. We then climbed up the Fram Head where water was piped from a spring to the statue of Neptune arriving at the Obelisk, a little known Victorian gem built in 1850. Hidden from view by greenery, this abandoned obelisk was built in 1850 by Durham philanthropist William Lloyd Wharton. It stands at 90 feet tall, yet surprisingly, the sandstone tower is visible from only a few vantage points, being relatively hidden and unknown to most Durham visitors and residents. The obelisk was once used by Durham University to determine due north during its studies of astronomy. 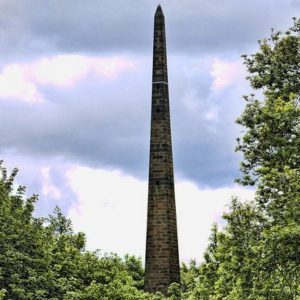 Our final hill took us to Wharton Park with a superlative view of Durham. Our final foray was through the station and back along the river and our final stop was along the river to see the huge bronze Dun Cow. 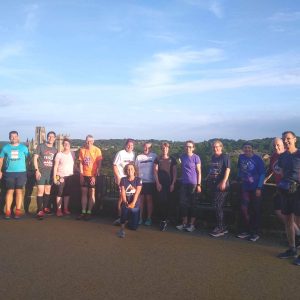 What a gorgeous evening stroll! We did 6 miles in 2 hours at walking pace. I can safely say this was a stroll that enriched both mind and body and no harm done to the planet.

Ken Bradshaw is a North East Blue Badge Tourist Guide and has lived in Durham for 30 years. He is journeyman and has travelled the world. Since qualifying as a Blue Badge Tourist Guide he has been sharing his knowledge and love of his City, Durham, and his Region with visitors from all the world and his local community – its fabulous buildings, incredible history, stupendous landscapes from coast to the moors and, above all, the region’s passionate people. Get in touch with Ken if you’d like a guided walk, run or bike ride in Durham or across the North East of England.