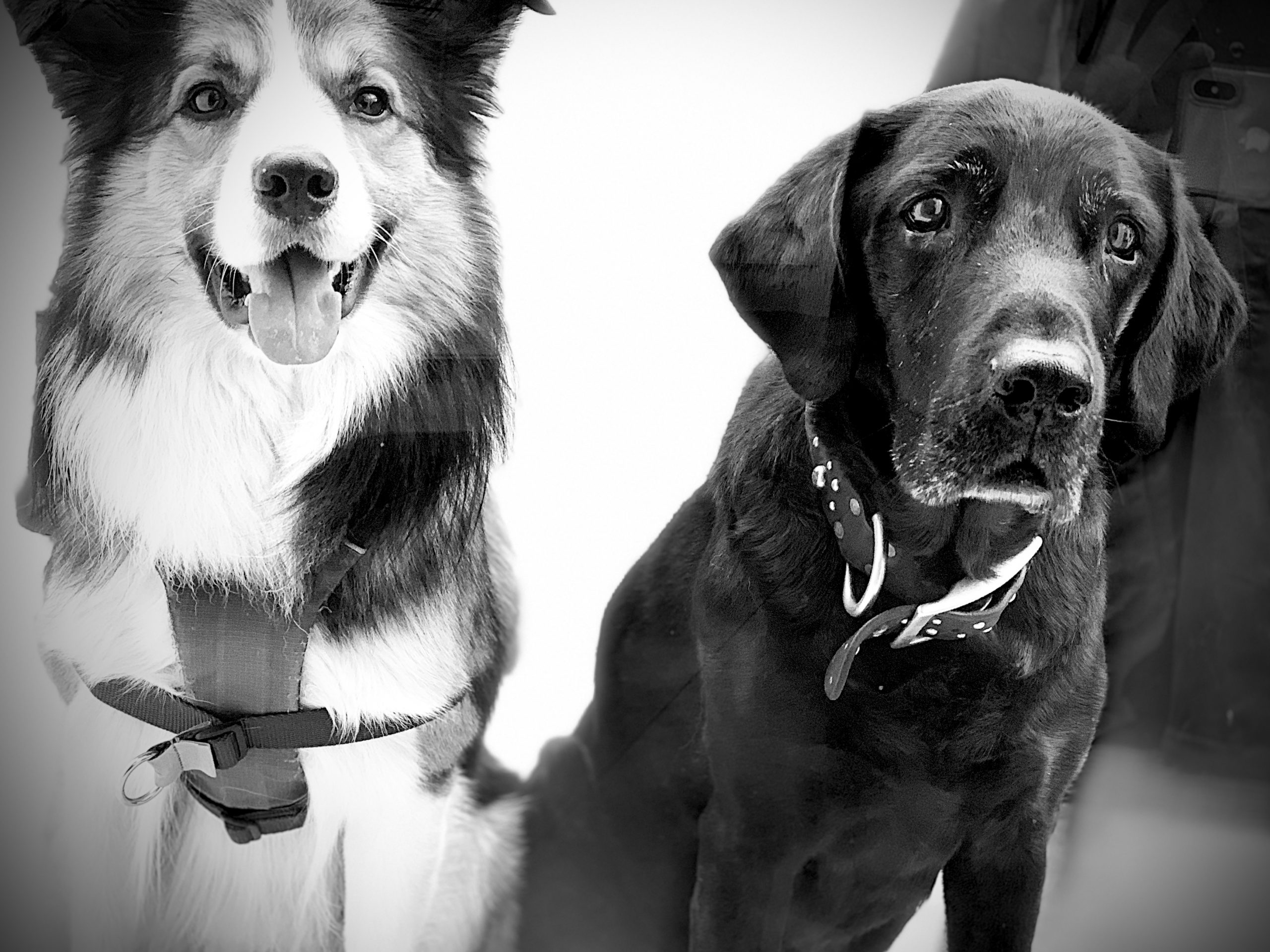 As International Dog Day approaches on 26 August, Mr Londoner, AKA Antony Robbins, turns his attention to man’s best friend – a topic eternally close to his heart.

We British, it is said, are a nation of animal lovers and the capital’s dogs enjoy a special place in the life and times of Londoners – from the Queen’s corgis to the Crufts Dog Show. Dogs feature in our popular culture too – from Cruella de Vil’s 101 Dalmations and Bill Sike’s dog Bulls-eye in Charles Dickens’s Oliver Twist. One of our most famous painters, William Hogarth, had a mischievous and chaotic pug. … named, er, Trump. Trump featured in several of Hogarth’s works, giving us a deliberately unsubtle clue to the artist’s own pugnacious character. 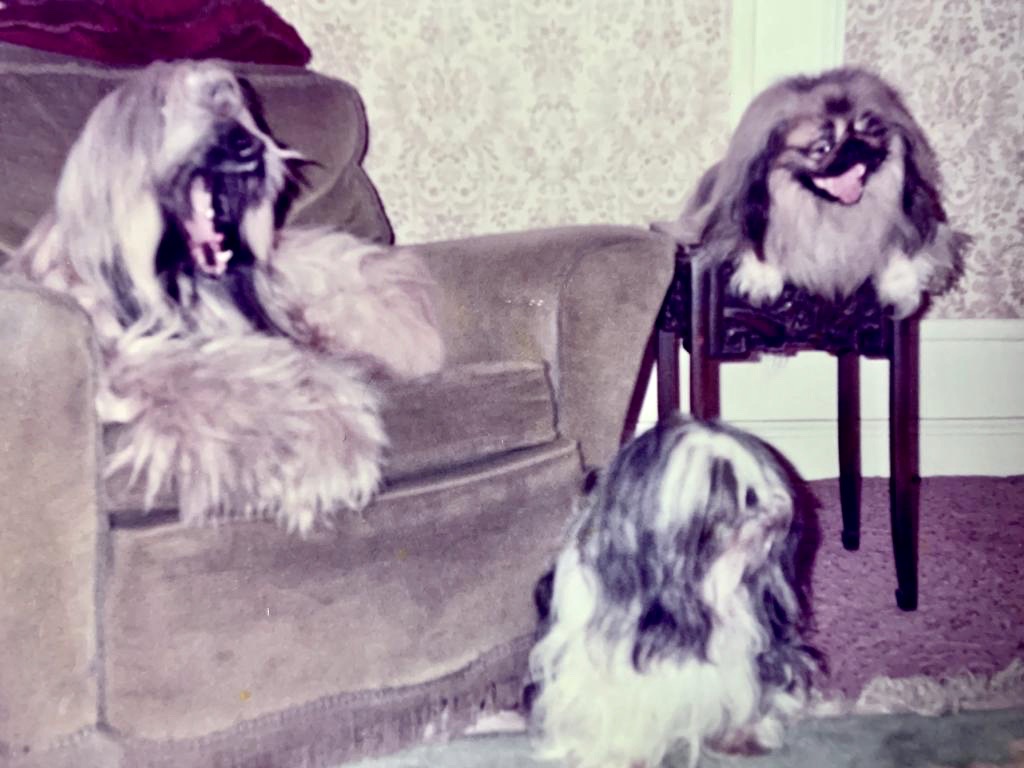 Mr Londoner grew up with a motley collection of dogs in the 1970s and 80s: Sheba, Brigadier-General Ding Dong and Foo.

Houndsditch, as any tour guide will tell you, might well take its name from the kennels that housed the hounds for the city hunt … or perhaps where dead dogs were dumped on waste ground. The Isle of Dogs may, similarly, have been named after the royal kennels that were maintained here. The derivation of Barking, sadly, has nothing to do with man’s best friend, but relates to Berica, the neighbourhood’s 7th-century overlord.

Unsurprisingly then, London is home to a number of leading canine institutions from the Battersea Dogs Home, to the Dogs’ Trust and the Guide Dogs Trust, which helps 360,000 blind and partially-sighted people. The Metropolitan Police runs five dog units, with animals used to sniff drugs and explosives as well as detain suspects. Dogs are surprisingly popular with Londoners given that so many of us live in flats (apartments) with no gardens or green space. Even more surprising perhaps are the army of professional dog walkers and dog minders who take care of other people’s dogs because they’re too busy to do it themselves. 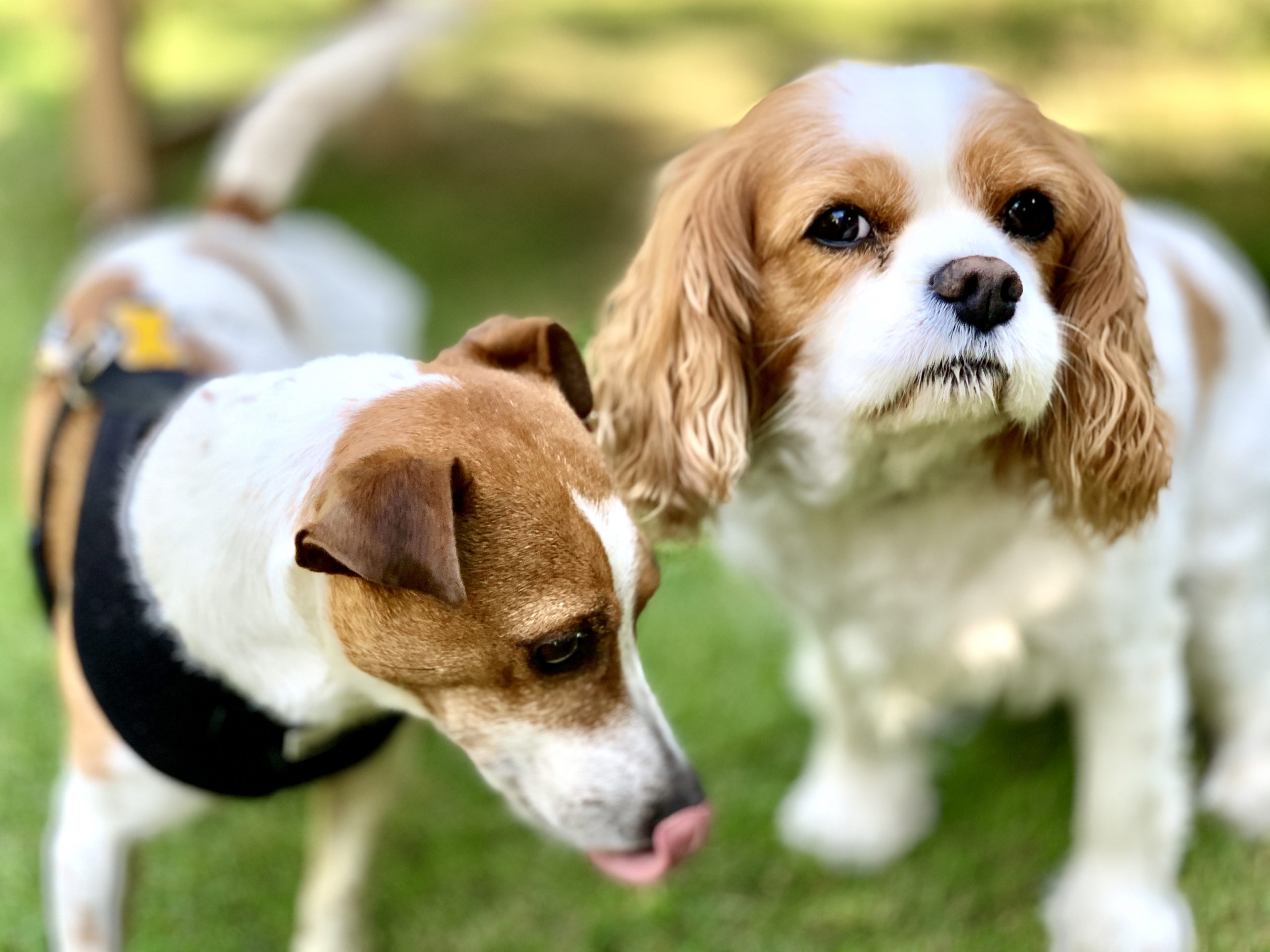 Bella and Freddie, two of the charges of professional dog minder Emma Hall.

The Crufts Dog Show is a national institution. It’s now held in Birmingham but has London roots. A plaque honours founder Charles Cruft, at Highbury. Initially promoted as the ‘First Great Terrier Show’, Crufts was held in 1891 at Islington’s Royal Agricultural Hall. This year’s show went ahead, just before lockdown. Top Dog, according to this year’s judges, was Maisie a wire-haired dachshund, declared the Show’s Champion.

Inspiring artwork from this year’s Crufts International Dog Show, held in March just prior to lockdown.

A recent survey by the Kennel Club reported that the capital’s dogs can reveal where their owners live. North Londoners, the research reveals, favour handbag dogs in the Paris Hilton stylie. While, up west, the King Charles Cavalier is the canine of choice in London’s most affluent boroughs, including Mayfair and Kensington and Chelsea. This is rather fitting, as the breed has long been associated with Royalty and the aristocracy.

Over her 63-year reign the Queen has owned a number of spaniels, dachshunds and dorgis (a corgi dachshund cross).  Her Majesty’s favourite breed has always been the royal corgi, however. She has owned 30 of them, some of which featured in the rather surprising opening scene of the 2012 Olympic Ceremony, in which Daniel Craig’s James Bond is summoned to Buckingham Palace, ahead of an important mission. 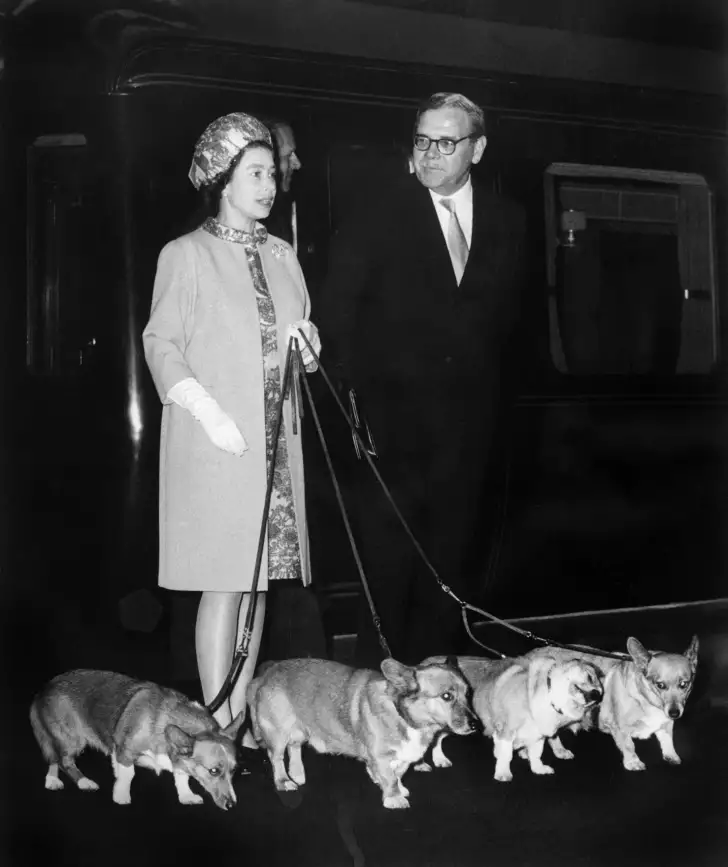 Her Majesty the Queen with her Corgis. Image: Wikicommons

The Queen Mother was equally fond of the breed. The sculpture of her on the Mall by Paul Day features two corgis. Day has a number of high-profile London sculptures to his name. The artist clearly loves a canine and features another in the battle of Britain memorial, unveiled in 2005. 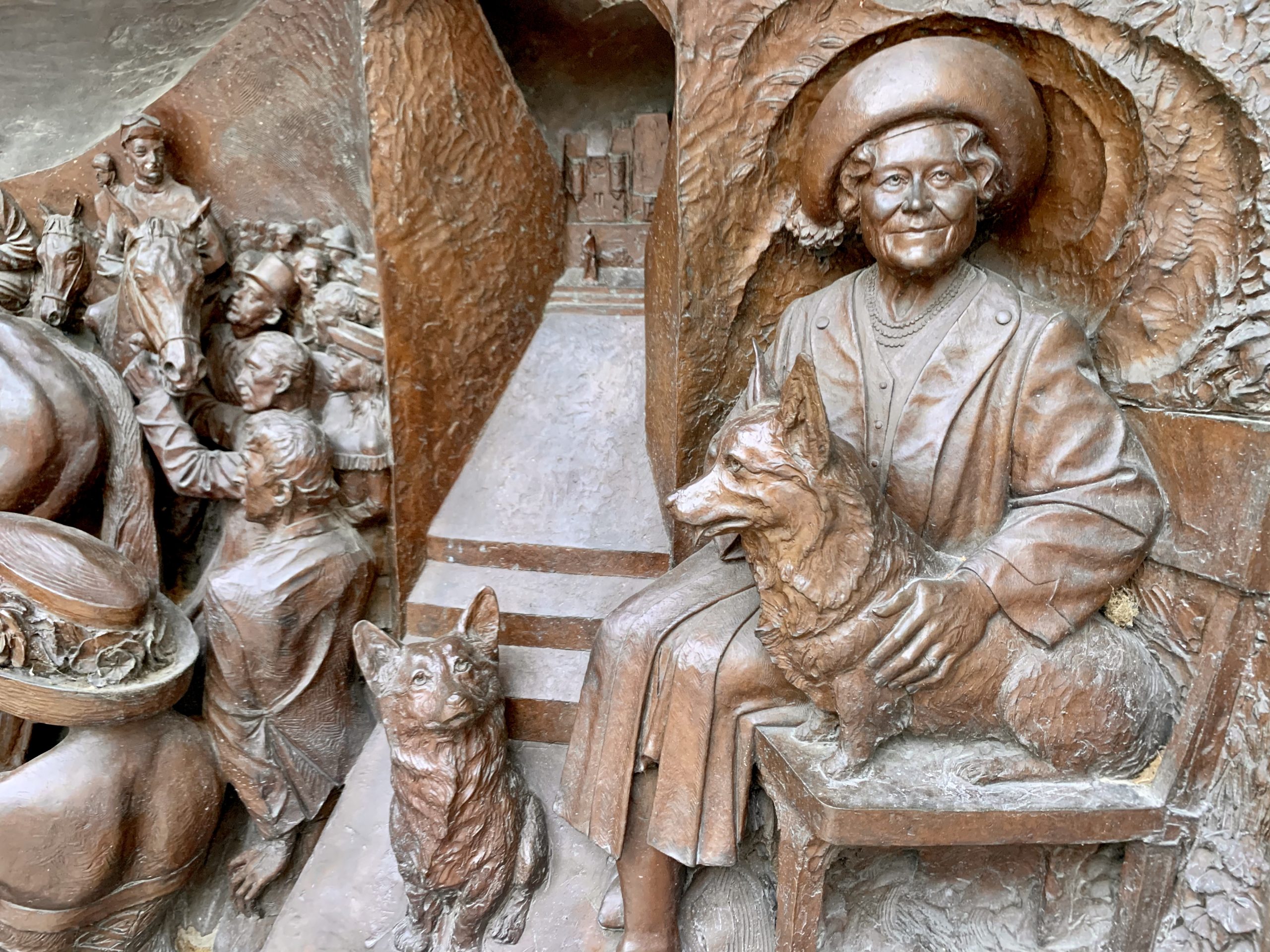 The Queen Mother’s memorial by Paul Day features two of Her Majesty’s corgis.

The UK is also the only state to award medals for animal bravery. The Dickin medal was instituted in 1943 by Maria Dickin, for the People’s Dispensary for Sick Animals. It was first awarded in 1943 to three pigeons recognised for their role in the rescue of three downed airmen. The most recent award went to Kuga, a Belgian shepherd dog, serving in Afghanistan with Australian Special Forces. Over 70 Dickin medals have been awarded to horses, pigeons and ships’ cats – and 18 dogs.

London is the only capital city in Europe to have built a memorial to animals in war. Right in the middle of Park Lane is the 1976 stone edifice featuring, not a dog alas, but a mule serving amid the horrors of WW1. 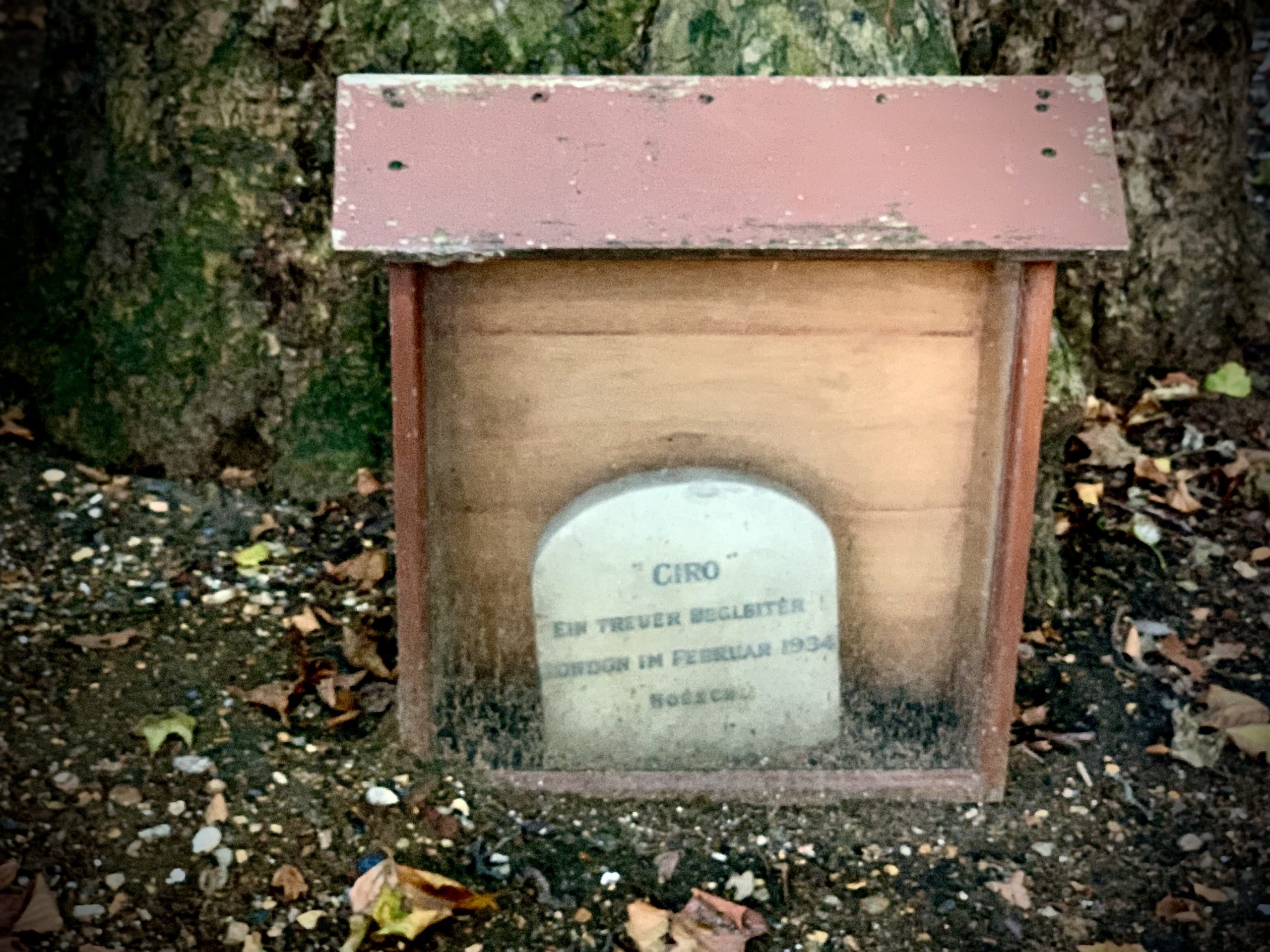 The grave of Giro – the erroneously named ‘Nazi Dog’.

Giro – the so-called Nazi dog – is buried near 9 Carlton House Terrace, the pre-war German Embassy. The unfortunate terrier was electrocuted in 1934 after chewing through an electric cable in the embassy garden. Giro’s owner was the German ambassador Leopold von Hoesch.

Hoesch, who had originally served in the pre-Nazi era Weimar Republic, was a charming and likeable man, popular in diplomatic circles and committed to promoting and preserving Anglo-German relations.

In 1933 however, German politics was turned on its head and Hoesch found himself representing the Third Reich. He died in 1936. His Swatsika-draped coffin was given a guard of honour of British Grenadier Guards and Nazi storm troopers as it processed down the Mall. Von Hoesch was no Nazi, neither was his dog. Nevertheless, the moniker has stuck.

Giro’s is not the only doggie grave in London. Hidden away at the northern end of Hyde Park is a pet’s cemetery dating from 1881. Its first resident was Maltese Terrier Cherry. The burial ground closed in 1903 but not before 300 pets were laid to rest. The sentimental inscriptions on the graves didn’t move everyone, however. Animal Farm and 1984 author George Orwell described the cemetery as: “Perhaps the most horrible spectacle in Britain”.

I love Orwell’s dystopian works, but I’m not sure I agree with him on this. Join me for walkies on Cavalier Attitude: the Dogs of London – for one of my more unusual explorations of the capital.

About the author: Antony Robbins is a dog-lover, writer and broadcaster. He’s a former director of the Museum of London and runs socially-distanced dog tours of London.