Yesterday (the 12th of November) was the first day of the Hindu festival of Diwali. The festival is associated with many different deities across India and beyond- Lakshmi, the goddess of prosperity is the most common, though other regions might associate it more with Sita and Rama, Vishnu, Krishna, Ganesha, Hanuman or other gods- India is a big place after all and Diwali transcends its borders.

The historical roots of Diwali are likely to be a combination of ancient regional harvest festivals and it is a time to celebrate the prosperity and plenty that this time of year brings – feasting is a common theme. The word Diwali itself comes from a Sanskrit word meaning “row of lights” and these traditional lamps play an iconic role in the celebrations.

It’s not just Hindus who celebrate at this time of year – other faiths from the Indian subcontinent also hold major festivals during the 5 days of Diwali. Sikhs, Jains and Newar Buddhists all mark their own celebrations.

There are too many variations to go into detail here (and I’d hate to miss anyone out) but what is always common across all celebrations of the festival is the underlying symbolism – the victory of light over darkness, good over evil and knowledge over ignorance.

In some places, Diwali marks the new lunar year. Much like New Year in the west, it’s a time for not only celebration but for reflection and hope. We take time to consider the benefits of unity while embracing diversity, charity and forgiveness while we celebrate the prosperity of the previous year and pray for more to come. 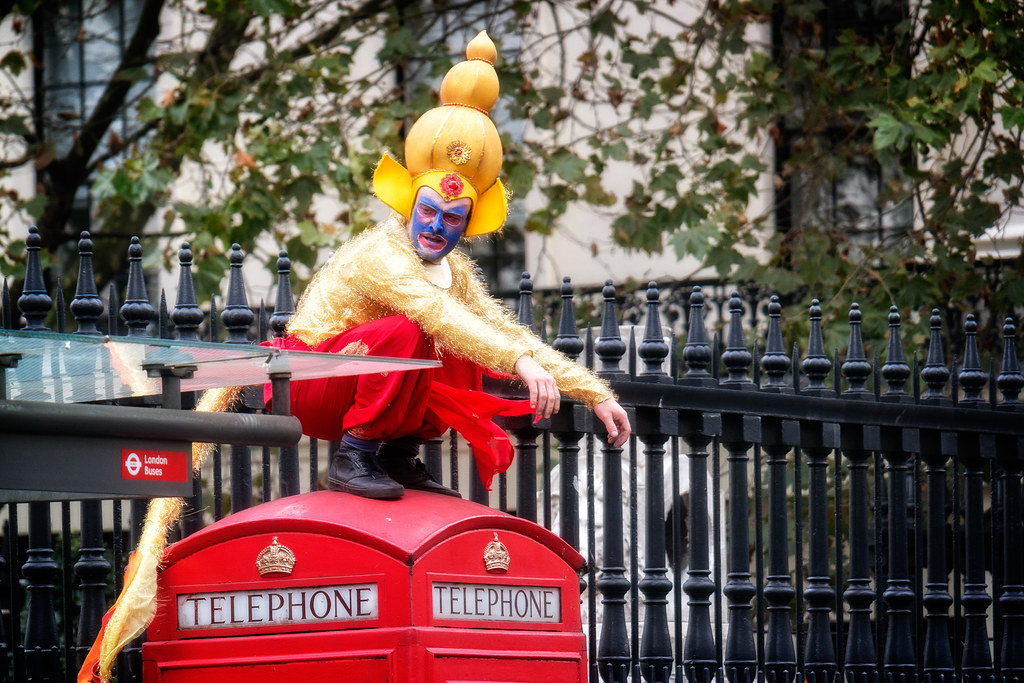 Diwali in London. Image by garryknight, licensed under CC BY 2.0

Each day has its traditional activities. While these may vary from place to place, the most common are:

In the lead up to the festival, homes are cleaned and redecorated. On the first day, it’s considered good luck to buy a metallic kitchen implement of some description. Perhaps the best known aspect of Diwali is traditionally created on this day- the Rangoli. These intricate geometric designs are drawn on floors using flower petals, rice flower and coloured powders. Homes and businesses are further decorated with lamps- which is where the name of the festival comes from.

Diwali celebrations in Trafalgar Square, London, in the past years. Image by everheardofaspacebar, licensed under CC BY 2.0

The day before the main festival, often called Chotti Diwali (“little Diwali”), is traditionally a day of preparation for the main event, much like Christmas Eve is in Christian traditions. People rush about running last minute errands, visiting friends and relatives and exchanging gifts. Religious ceremonies involve praying for peace and to ease the suffering of the living and the dead.

Celebrations apex on the 3rd day. Usually this is marked through religious ceremonies and celebrations- a riot of fireworks, lamps and a party atmosphere- it’s these celebrations that you’re most likely to be familiar with. This is a time of great unity and forgiveness- no one wants to spoil the atmosphere! Even more lamps are lit and rituals to welcome Lakshmi into the home to bring peace and prosperity take place. People dress up in their best, feast and celebrate. 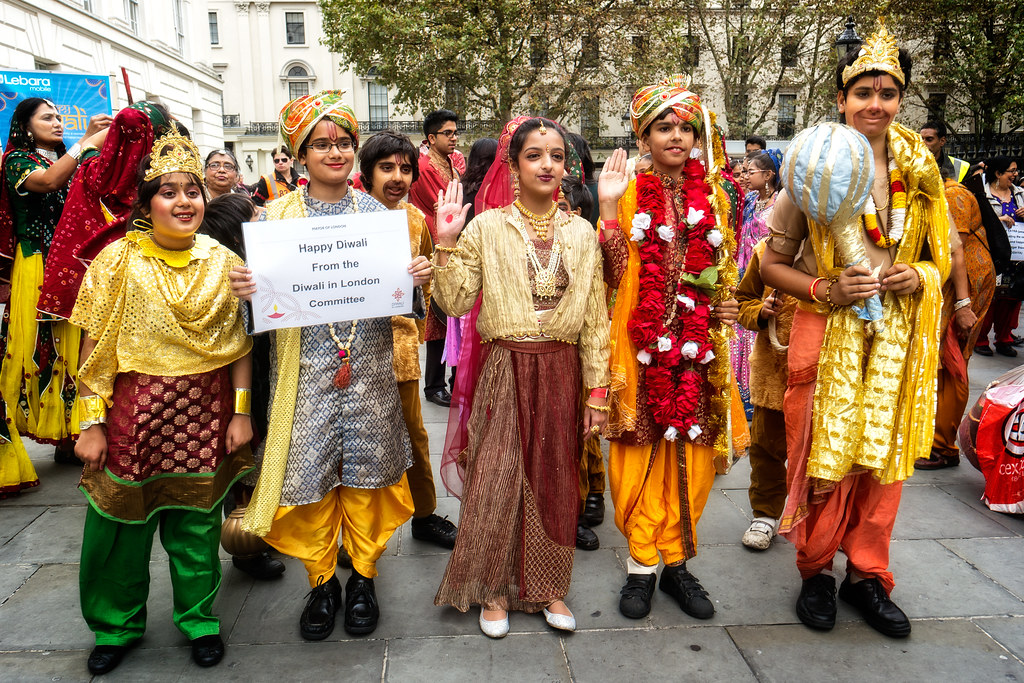 Diwali in London. Image by garryknight, licensed under CC BY 2.0

Day 4 of the festival varies a lot depending on which regional tradition you’re following. In some areas this is a celebration of the love between spouses. Many people also celebrate the agricultural significance of Diwali on this day- preparing mountains of food.

On day 5, we celebrate the bond between brother and sister. Brothers will travel to meet their sister’s family and we celebrate our sibling bonds with feasting. In Northern India, people celebrate their tools- chefs will honour their kitchens, business people their books, artists their paints and brushes- the point is to celebrate the prosperity that they have brought and will continue to bring.

In most years, London plays host to Europe’s largest Diwali celebration- 5 days of celebrations peaking with the huge Diwali on Trafalgar Square event. Usually, this event is a massive celebration- there’s food, dancing, and lights everywhere as the city celebrates together. It’s a fantastic spectacle and it’s simply impossible to not join in. 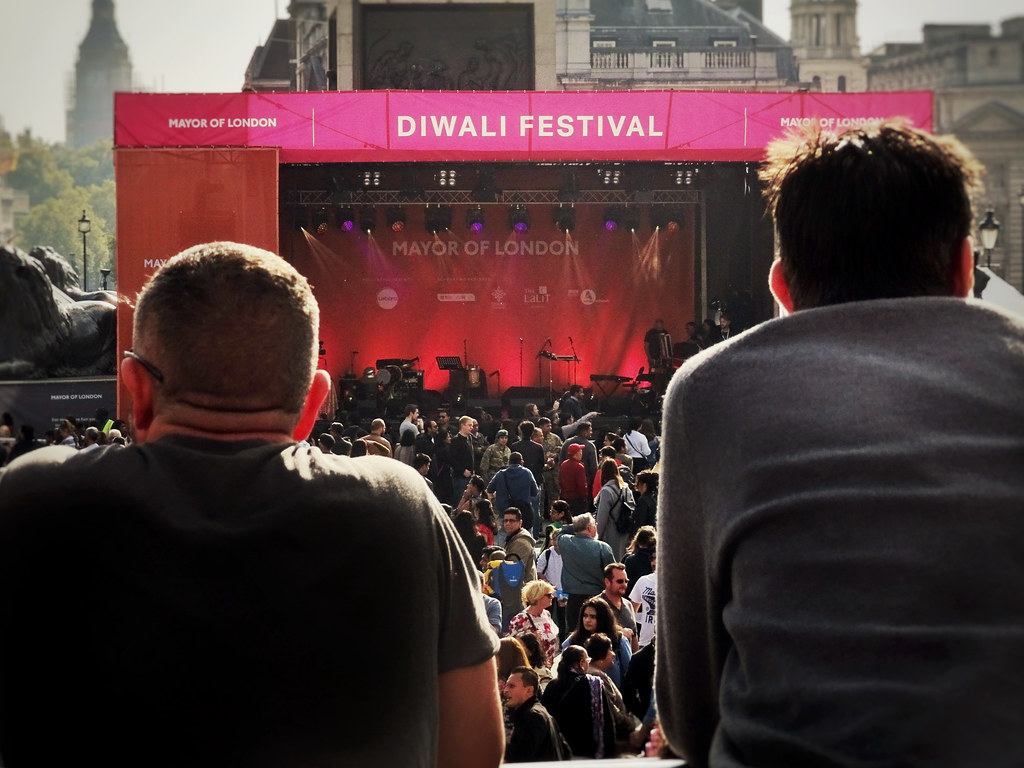 Diwali celebrations on Trafalgar Square, 2017. Image by garryknight, licensed under CC BY 2.0

Unfortunately, the pandemic means that for the first time in 18 years, there will be no public celebration there this year- Corona Virus is no respecter of tradition.

This year, the celebrations will be taken online instead, so that even while we are apart, we can still celebrate together.

Featured image: “Happy Diwali”, by sowri ,licensed under CC BY 2.0. 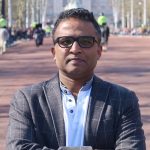 Shaju Nair is a Blue Badge guide in London and well versed with most of the Indian languages. If you’d like to explore the city’s links with his tours, or any of the many, many other links which bind London and India he is available to show them to you. You can contact him here or through his London guided tours.