What more can possibly be said about wartime Prime Minister Sir Winston Churchill? Antony Robbins explores some of the more unlikely aspects of the great man’s personality, quirks and achievements.

War and peace
“It’s said that all political careers end in failure and so it was for the man cited by many as our greatest Prime Minister. Churchill had seen the nation through its darkest hour. He was both an inspirational leader and one of the world’s first political brands, delighting in his depiction as a British bulldog. Winston Churchill won the war but lost the peace. In the 1945 general election, after five long years of war, he was ousted by Labour leader Clement Attlee. A new age beckoned.

It’s these contradictory aspects of Winston that have inspired my Churchill in Four Hats tour, which explores some of the more surprising elements of his persona. I chose hats because he loved a costume. Think of Churchill and accessories come immediately to mind: cigars; canes; bow ties and onesie-like siren suits. Move over Lady Gaga. Winston – a short, fat, bald man with a lisp – was an unlikely style icon. And he just loved a hat. So we tour London in a comfy black cab sporting a selection of suitably vintage Churchillian headwear to get us into the mood. You might find yourself in a pre-war dark felt Homburg or perhaps an Aussie-style slouch hat, the type worn by Churchill during his derring-do South African adventures. 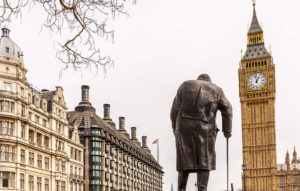 Goodbye to all that
So why did Churchill lose the peace? At the end of WW2, Britons looked forward to a brighter and very different future. Churchill remained popular. But he was an aristocrat and a colonialist, moving in rarified circles. Born in a palace, he enjoyed a lifestyle that served to underline a yawning gap between rich and poor.

The country was changing. People of all classes and races had faced danger together. Londoners had encountered all kinds of different people – especially US personnel, with their ready charm, stylish uniforms and new dance moves. The old order, embodied by Churchill, was suddenly out of place and out of time. 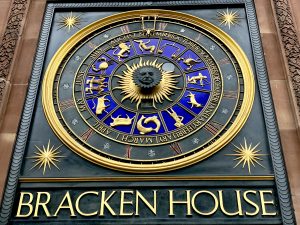 Winston’s face beams out of the centre of the sundial on the Financial Times building.

The mark of the man
Winston has left an indelible mark on our capital city. But where to start? Although an obvious choice, I love Churchill’s statue in Parliament Square. He glowers across to the Palace of Westminster, shrouded against the blustery elements in his naval great coat. A quirkier reminder is in the City of London. Here his pug-like countenance beams out from the Bracken House sundial in Canon Street. (HQ of the Financial Times.) FT founder Brendan Bracken was a steadfast political ally of Churchill.

There are Churchill connections across the capital. The 1911 Sidney Street Siege – sparked by a gang of Latvian anarchists – kicked off in the heart of the East End. Winston, then Home Secretary, resplendent in silk top hat, was keen to cast himself as a decisive man of action who quelled insurrection. The unfolding drama ended in fire and death. Pathé News covered the action – the first live incident caught on camera.

South of the river is one of London’s few remaining bomb sites – the blitzed church of All Hallows, Southwark. Nearby is the George and Dragon pub. This historic coaching inn, now owned by the National Trust, was one of Churchill’s favourites. He liked a drink or two. Despite his liquid diet and a love of rich food, Winston lived to 90. He died in 1965, at Hyde Park Gate, a discreet Kensington cul-de-sac.

Boots made for walking
St James’ and Jermyn Street have traditionally been where gents acquired their daily (albeit luxurious) essentials. Churchill lived nearby in the 1880s. James J Fox, established in 1881, supplied Churchill’s cigars. Nearby is John Lobb. It’s been around 150 years and was Blitzed six times. It’s more of a historic workshop than a modern retail store. Don’t let these artisanal surroundings fool you however: a pair of Lobbs starts from £20,000.

Impressive hats featured large in Churchill’s life – perhaps when his hair was becoming rather less significant. Lock and Co Hatters, a few doors down, supplied Churchill’s headwear. He popularised the ‘Bowker’. This sits somewhere between a Derby (Bowler) hat and a Homburg. Still can’t picture it? … then think of the hazardous headwear sported by James Bond baddie Odd-Job in 1964’s Goldfinger. 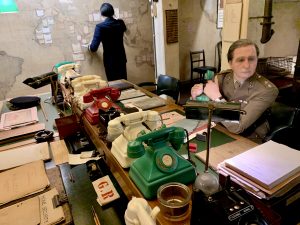 Officers in the Map Room of the Cabinet War Rooms

Darkest Hour
Any Churchill tour has to include the Cabinet War Rooms, popularised by the 2017 film Darkest Hour, staring Gary Oldman. It was from this windowless, smoky basement that Churchill led us to victory in 1945, when the lights were turned out and the doors locked for the last time. It wasn’t until the late 70s that someone thought this authentic time capsule might make a decent visitor attraction. 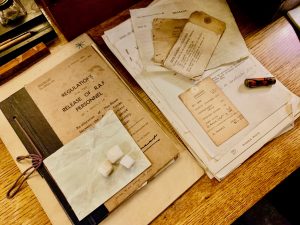 Bunker Down
Today it retains its time-warp condition. Every pencil, ash tray and fire hose is the real thing. These random objects are now precious museum artefacts – right down to the three sugar lumps left in a drawer by an RAF officer. The museum’s energetic director, Phil Reed, celebrates these small human details. They bring the place to life.

Churchill was a towering figure of the 20th century. He was a risk-taker, rule-breaker and style icon. Modern leaders try to emulate him. Churchill’s life is a contradiction. It was peppered with failure, bad decisions and a less-than-promising academic start. Yet none of this overshadowed his victory in Britain’s darkest hour and his place as our greatest ever Prime Minister.

No-one will ever quite fill his shoes. But by wearing his hats, we can celebrate and mark the legend that was Churchill, in an appropriate style.”

Antony Robbins is a Blue Badge Guide working in London. He is also a communications consultant, broadcaster and former Museum of London director.