Chester has 2,000 years of heritage from the Romans to the Beatles. But much of its history draws on the dark side with tales of ghouls, gore and grisly tales a mainstay in the shadows and darker corners of the Roman-heritage city. That’s why I’ve started a new Dark Chester tour — just in time for this year’s Chester Heritage Festival  the story of the city and its people.

I wanted to compile a 90-minute dark-tourism tour, exploring some of the favourite folk tales, legends and superstitions that have fascinated Cestrians, that’s the people of Chester, for centuries. I also wanted to let visitors peer behind the visitor-friendly façade of some of our best- known attractions to uncover the darker and lesser-known stories of the macabre. But don’t worry. The Dark Chester tour is no jump-scares pantomime, nor is it a dry, academic lecture. It’s an atmospheric evening walk, mixing a dash of Horrible Histories with some League of Gentlemen-style dark humour. 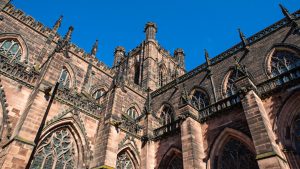 So, what to expect? We will visit Chester Cathedral, founded by The Normans as a Benedictine monastery in 1092AD, to find the Chester Imp, an effigy of the Devil in chains. And we’ll learn why you should always walk around a church clockwise.

We will also talk about crime and punishment, learning about Chester’s notorious Northgate Gaol with its torture chamber known ironically as ‘Little Ease’. Chester also loved a good public execution — Cestrians gathered en masse to enjoy the spectacle well into the 1800s. But some were put off after the religious martyr George Marsh was “burnt to ashes as a heretic” in the 1550s for preaching Protestant doctrine during the reign of Mary Tudor. It took a long time for the legs to burn apparently. 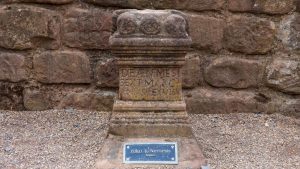 The Shrine of Nemesis, Chester

Elsewhere we will find Roman gladiators worshipping at the shrine of Nemesis in Chester’s Roman amphitheatre, built soon after the arrival of the Romans who founded the city as Deva around 74AD. St Mary’s Church within the city walls, meanwhile, tells us of another type of worship — witches buried in unmarked graves during the height of Chester’s home-gown witch trials from the 1630s to 1660s. 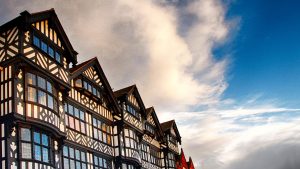 The Rows, covered walkways at first-floor level on the four main streets of the city, are a unique feature of Chester and a major tourist attraction today. But there’s dark history behind the independent boutiques and hipster coffee shops. The Rows date from the reign of Edward I and his ring of iron castles in the late 1200s. In medieval Chester, however, they were rife with plague, pestilence and poverty — and stalked by the shadowy figure of the Plague Doctor.

So, join me and, together, let’s take a walk on the dark side.

David Atkinson is a journalist and a qualified Green Badge Tourist Guide, based in Chester. He knows his home patch inside out, offering tours and talks on a variety of themes for private groups around Chester and North Wales. He welcomes enquiries about future tours. To find out more about David visit his website