There are few things we take more for granted than our cathedrals. Even in the 21st century, they tower over our cities like stone dinosaurs – and we mean that in a good way. Relics of a lost world of masons and wall paintings and stained glass and belief. The one continuous thread is worship and in an age of dwindling congregations that can feel shouldered aside by secular demands.

In tourism terms, the 42 Anglican and 22 Catholic cathedrals of England and Wales play a huge role in attracting visitors. While church attendance dwindles, cathedral visitor figures were going up: 11.3 million people (more than a quarter of England’s adult population) say they have visited a Church of England cathedral in 2019 for reasons other than worship – quite aside from foreign visitors. 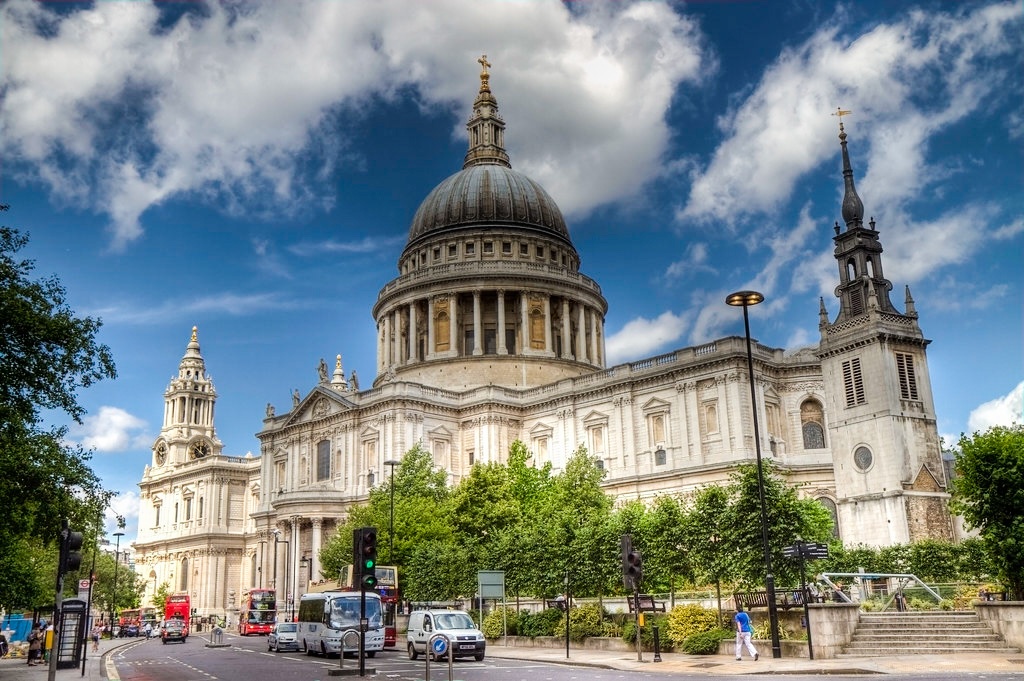 But then the pandemic hit and plans went to a halt… for a while. But thankfully these last few days we saw the cathedrals slowly and safely opening back up to visitors, and every single one which was able to re-open to the public has achieved the Visit Britain’s industry-standard We’re Good to Go which means they have taken all the necessary steps to help ensure people’s safety in line with the latest Government and Public Health guidance.

According to the English Cathedrals website, St Albans welcomed over 400 people to the first Cathedral At Night event since lockdown on July 24th. Visitors were able to discover more about its medieval past and see its ancient wall paintings illuminated for the evening, plus guided tours by costumed guides, prayer stations – and Pimms, cakes and strawberries on sale in the café. Salisbury Cathedral, Saint Paul’s, Canterbury Cathedral and many others have opened recently for visits, and we are glad to see life slowly returning to these sacred places. 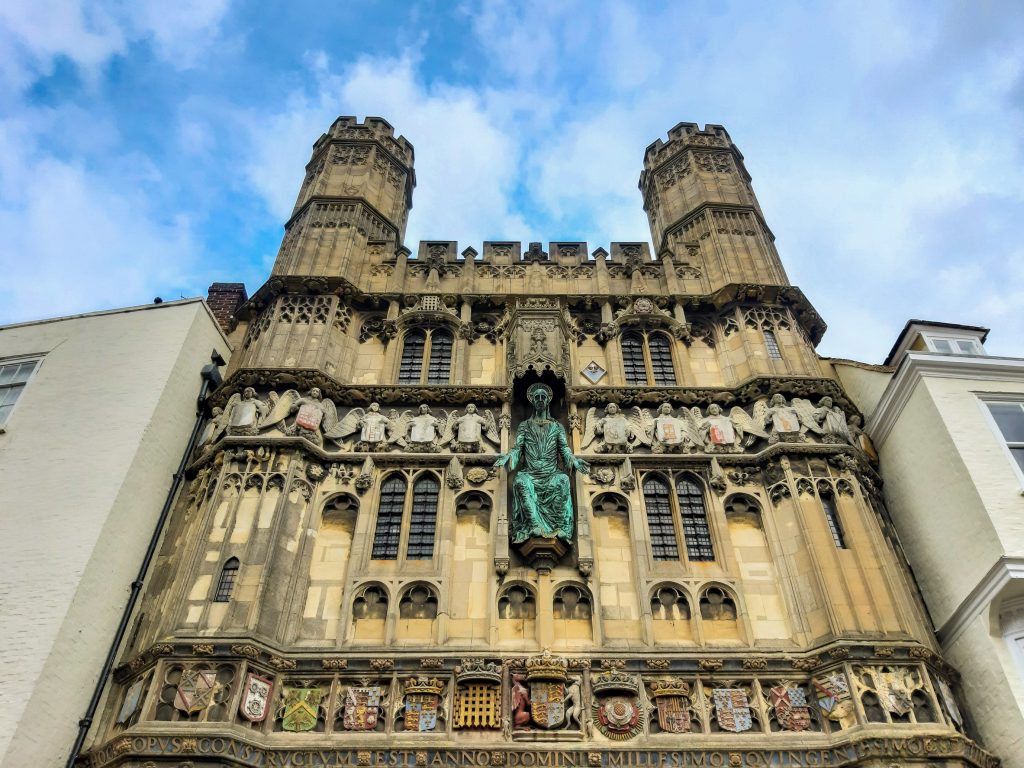 Just have in mind that your visit might look a bit different, due to social distancing measures. Most of them are operating under a one-way route, which also includes hand sanitising stations, new signage, fewer seats and the latest guidance strongly advises that face coverings should be worn by all those attending a place of worship where there may be other people present. All of these measures have been put in place to make sure we can all still celebrate the Year of the Cathedrals, though in a much quieter way than planned at first. Which, if you think about it, is also rather suitable – if anything, the English cathedrals have that sort of beauty that does ask for a bit of quietness to be truly appreciated!

You might all have your own favourites and your hit list of those you want to see. But as it happens in everywhere, sometimes it’s not the obvious things but the hidden artefacts that may surprise you.

So here is a selection of the secret artefacts you should hunt out on if you are planning to visit any of those cathedrals (and better yet, plan your visit with one of our Blue Badge guides – they are the best to help you look for these hidden treasures and to tell the centuries of history carved in every wall).

Best artefacts to look for

England’s largest surviving medieval map is drawn on vellum, dates back to around 1300 and shows the history, geography and world view of contemporary Christendom. It is unique in Britain’s heritage, an outstanding treasure of the medieval world. 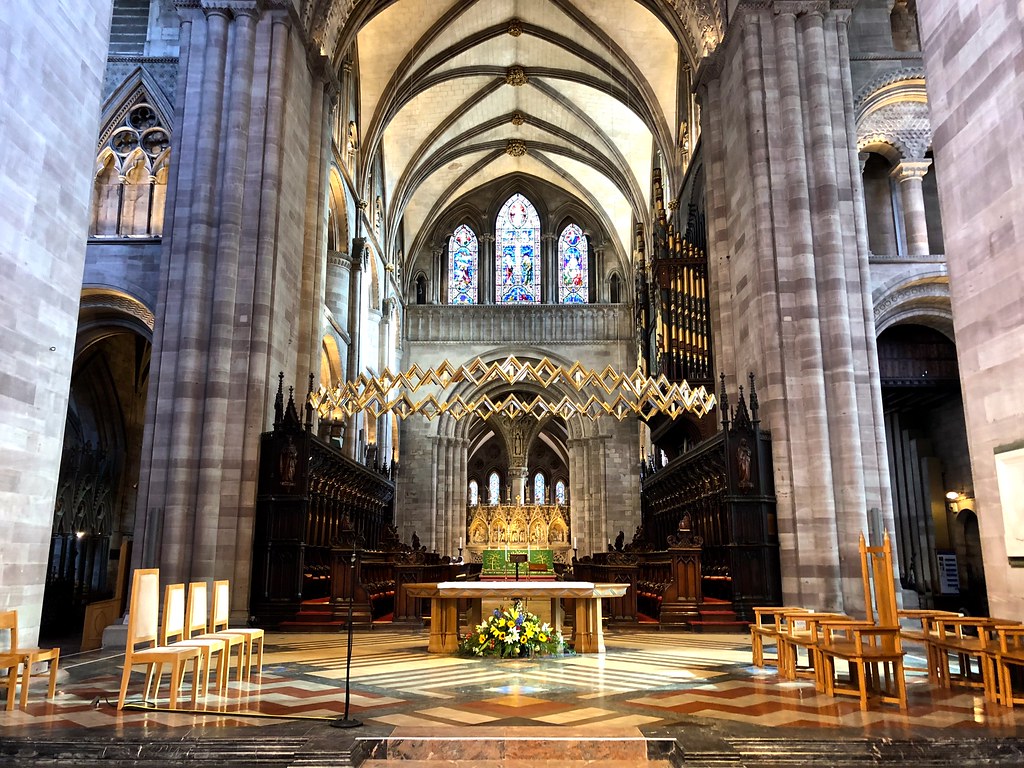 If you would like to book a tour to Hereford Cathedral, the Blue Badge Guide Stephen Roth will be happy to help you!

Leicester Cathedral has many stories to tell. Built on the site of a Roman temple and dedicated to St Martin of Tours, has been embedded in the public, economic, cultural and religious life of this community since medieval times. But when you visit there, be sure to look for the contemporary sarcophagus of the (in)famous Yorkist king, whose body was discovered under a nearby council car park, formerly a friary, in 2012. 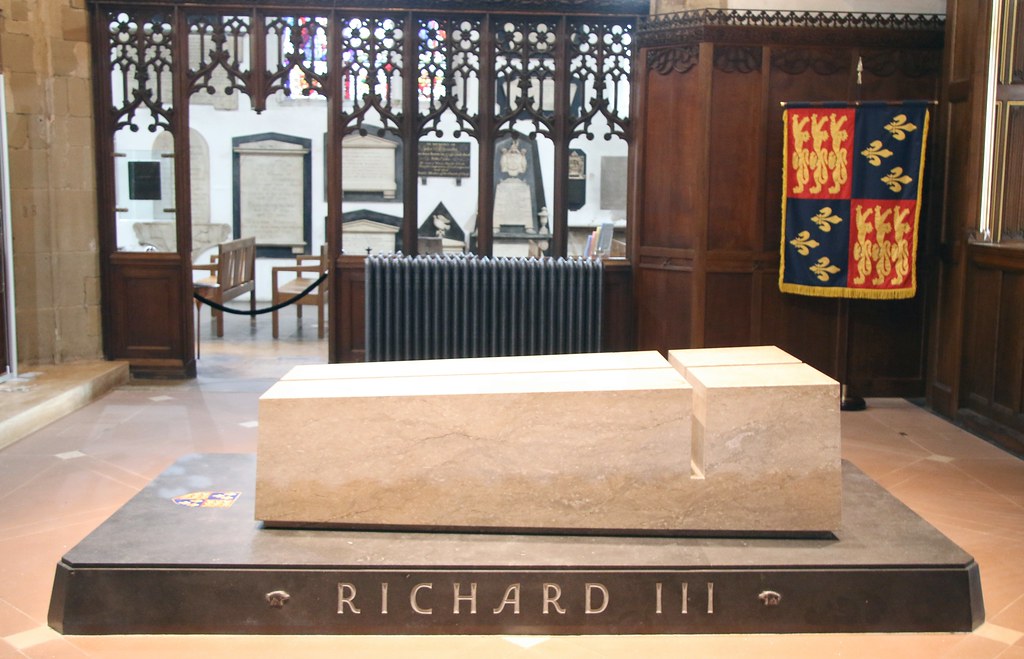 Our suggestion: combine it with a beautiful tour with Roger Bailey. He is an expert Blue Badge guide in the area and has already inspired our inner travel bug by writing about 10 things to do in the Heart of England.

When you visit Salisbury Cathedral – and you must, because there is just so much to see and marvel at – be sure to look both up… and down. It is famous for its spire, the tallest in England, with more than 400ft high, a brilliant feat of medieval engineering. But also look for the Magna Carta: the best of four surviving copies of the first edition of the 1215 Great Charter, sealed by a reluctant King John at Runnymede and written by scribes for general dissemination. It is still today a remarkable document, listed on the UNESCO ‘Memory of the World’ register. 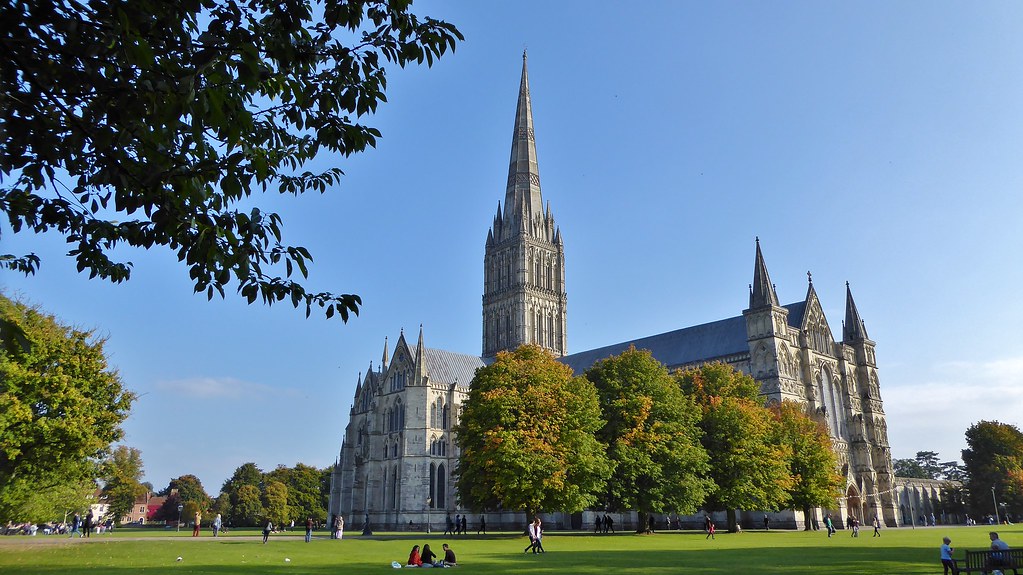 Unfortunately, it is not possible to see the actual Magna Carta for now – due to Covid-19 restrictions the Chapter House where it is located is currently closed. But you can find a high-resolution facsimile of Magna Carta available to view inside the Cathedral.

If you want to use the occasion to embark on history, it is worth it to combine a visit to the Cathedral with Old Sarum or Stonehenge, not too far from there. The Blue Badge guide Sally Peel can help you to design the best tour.

The Wells Cathedral definitely worth it a visit: it has been called “unquestionably one of the most beautiful” and “most poetic” of English cathedrals. With so many things to marvel at, don´t miss one of its highlights: the 1390s clock face which is the most charming to survive in Britain. It still works and has two faces, one interior, one exterior. The sun and moon revolve around the earth and jousting knights mark the quarter hours. 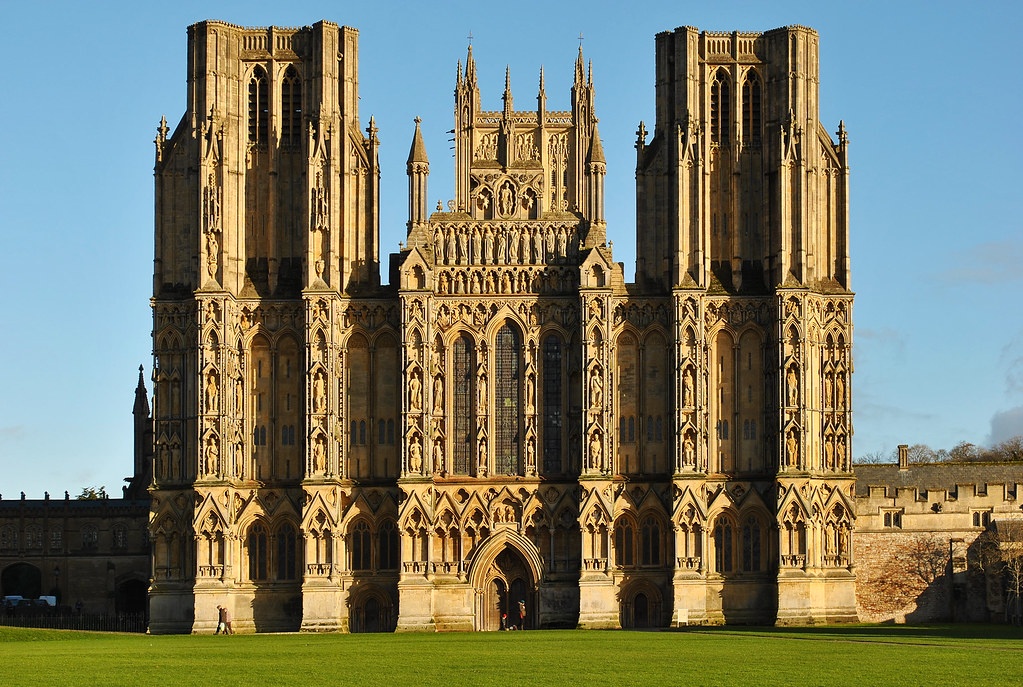 The cathedral was one of the filming locations of Elizabeth: The Golden Age, with actress Cate Blanchett performing the main role. So if you want to visit the Cathedral but also to hear all the not-so-famous bits of history, get in touch with one of our Victoria Barwell, one of the most knowledgeable guides in the area!

Monks were required to stand all the way through their long services, so the misericords were used as supports. They derive their name from the Latin for ‘mercy’. Wonderfully-carved 16th-century scenes survive beneath the stalls in the choir, despite nineteenth-century reconstruction, and are famous for their animals and saucy vignettes. 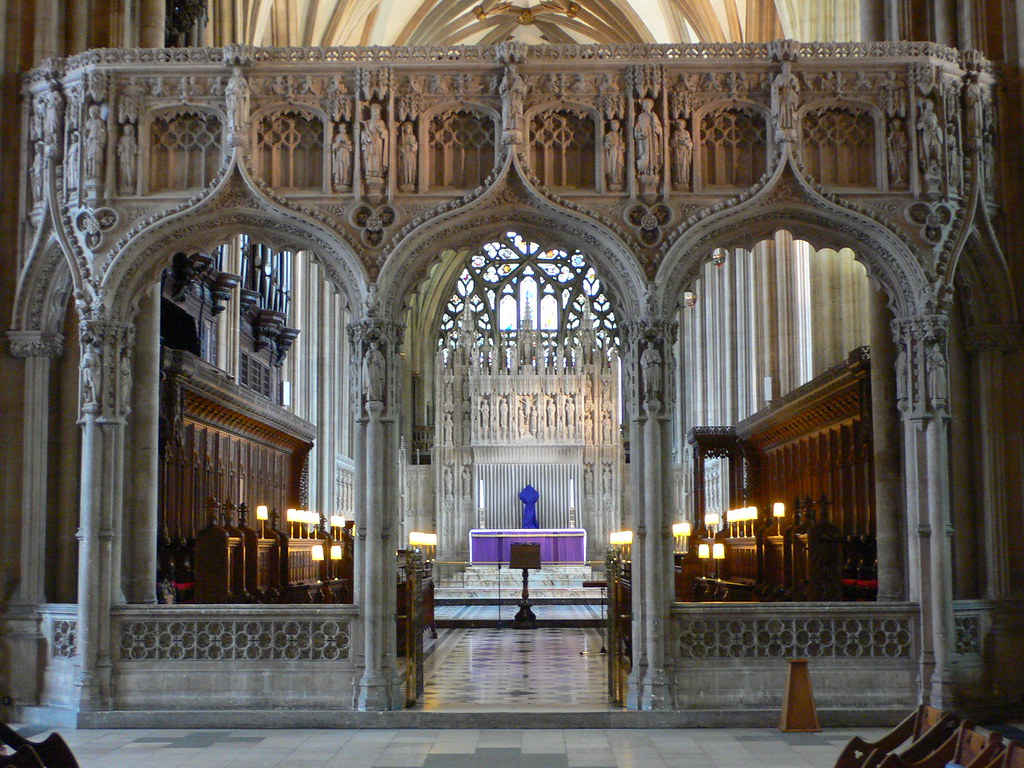 If you are after a tour around Bristol, get in touch with Blue Badge Guide Mike James – he is an expert in ghost tours around Cotswolds, and definitely can tell you those amazing stories that the earthly eyes can´t see!

Blue Badge Guides take tours to most of the cathedrals mentioned here – you can find some of them suggested in this post, or you can search for guides here.

In many of the buildings, they are the only outside guides allowed to escort visitors.