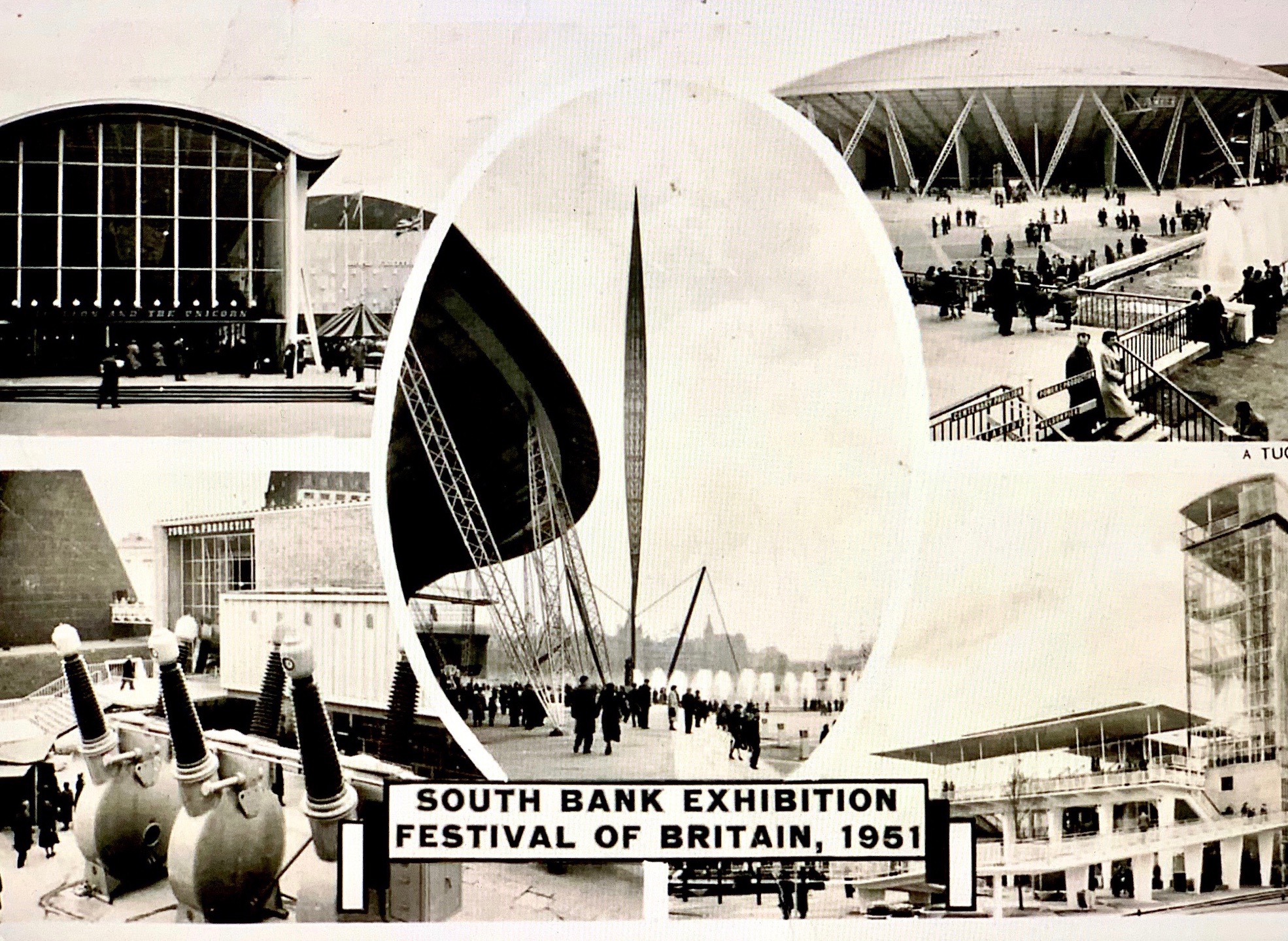 Let me take you back to the Britain of 1951. The Second World War had ended just six years earlier. Cities including London, Plymouth, Coventry and Glasgow had been bombed relentlessly and still bore the scars. Surviving city buildings were covered in layers of dark soot – pollution from coal fires and industry. Rationing was still the order of the day and (for fresh meat) remained in place until 1954. The early fifties were a gloomy time.

And yet, the Festival of Britain opened on 4 May 1951, giving the country a much-needed boost. It celebrated Britain’s contribution to civilization – past, present and future. The arts, science, industrial designing and technology took centre stage. The Festival was a vision of the future. It pointed the way to new and healthier ways of living for a nation that had sacrificed so much in the fight against Fascism. 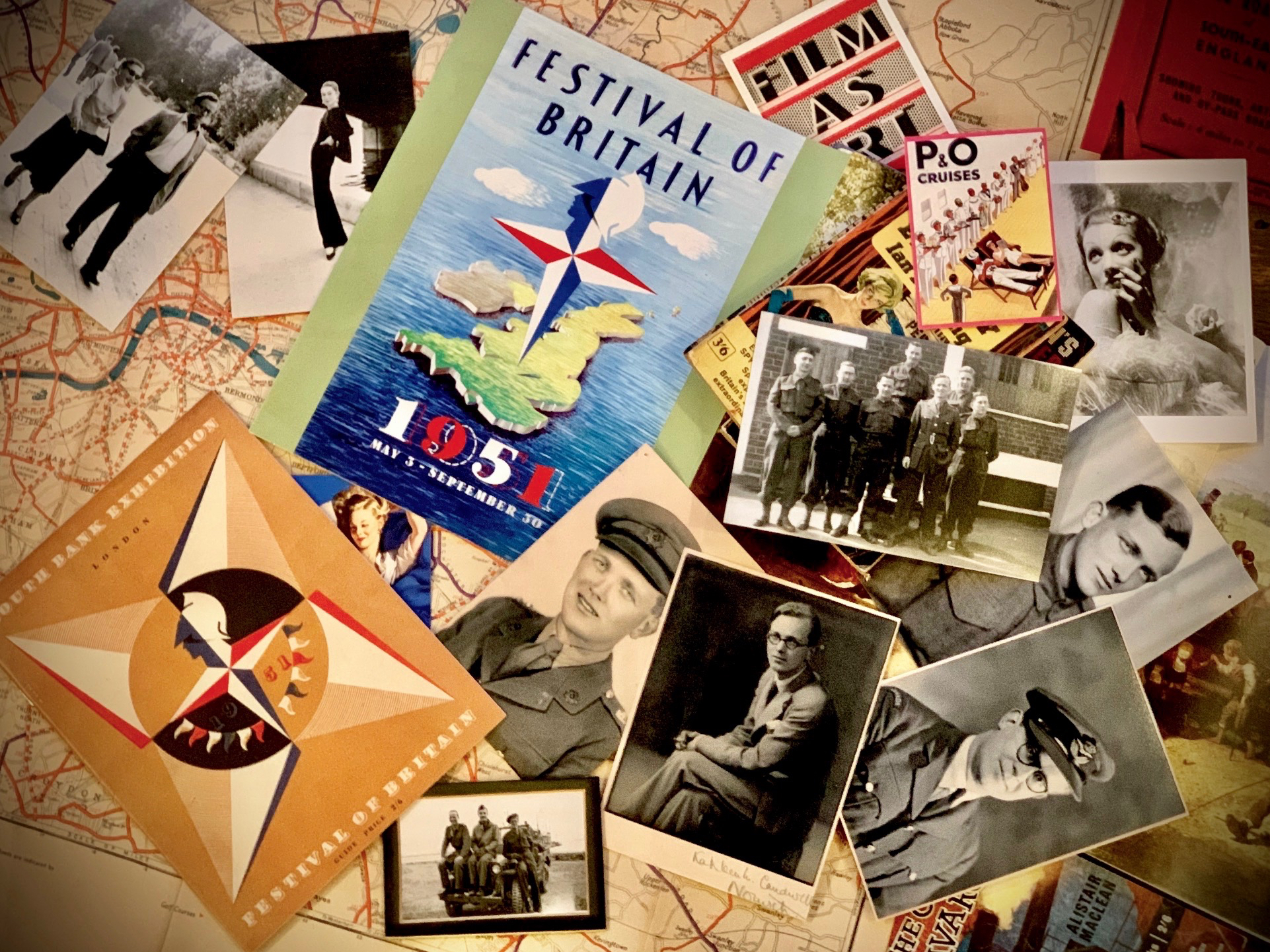 Its timing marked a watershed in British history. Society was about to pivot. Just nine years earlier, the Battle of El Alamein marked the first turning point in the second world war. Ten years later, a band called the Beatles were wowing audiences in Hamburg. The British empire was shrinking and people from across that empire were seeking a new life in the UK.

The Festival was initially conceived to mark the centenary of the 1851 Great Exhibition. Rather than staging another world fair, it became a celebration of peace and modernity. Its champion was Labour politician and former leader of the London County Council, Herbert Morrison, dubbed ‘Mr Festival’.

Today, when we think of the Festival, we picture the transformation of the 27-acre South Bank site, which attracted over nine million people. Its Dome of Discovery and space-rocket-like Skylon sculpture, were instant hits. People travelled across the UK to see the spectacle, some bedded-down overnight in Clapham’s WW2-era deep-level bomb shelters. 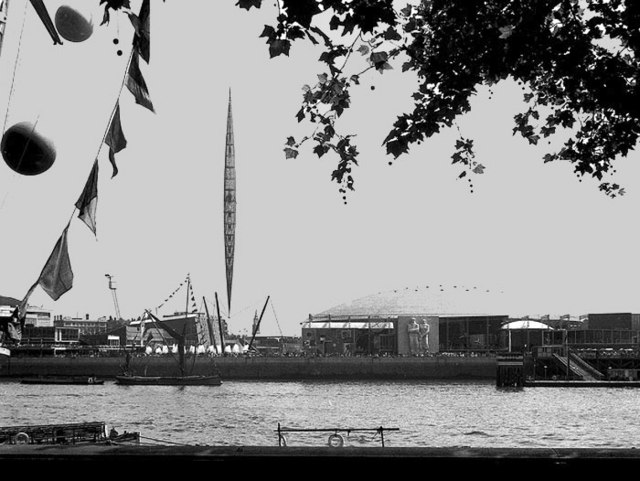 A view of the South Bank Exhibition from the north bank of the Thames, showing the 300-foot tall Skylon and the Dome of Discovery. Image by Peter Benton, under the licence CC BY-SA 2.0

The Festival was actually a nationwide event. Belfast held the Farm and Factories Exhibition. Glasgow’s Kelvin Grove hosted the Industrial Power Exhibition. There was a even a festival ship, HMS Compania, which visited ten UK ports. This 1941 converted escort aircraft carrier had begun life to transport refrigerated New Zealand lamb.

London’s additional Festival sites included Battersea Park, which hosted pleasure gardens, and South Kensington, home to the science exhibition. On Poplar’s Balfron Estate, architect Frank Gebbard conceived the Living Architecture Exhibition. Designed as an ambitious example of post-war renewal, it failed to draw the crowds – too much of a muddy building site to appeal to 1950s sensibilities apparently. 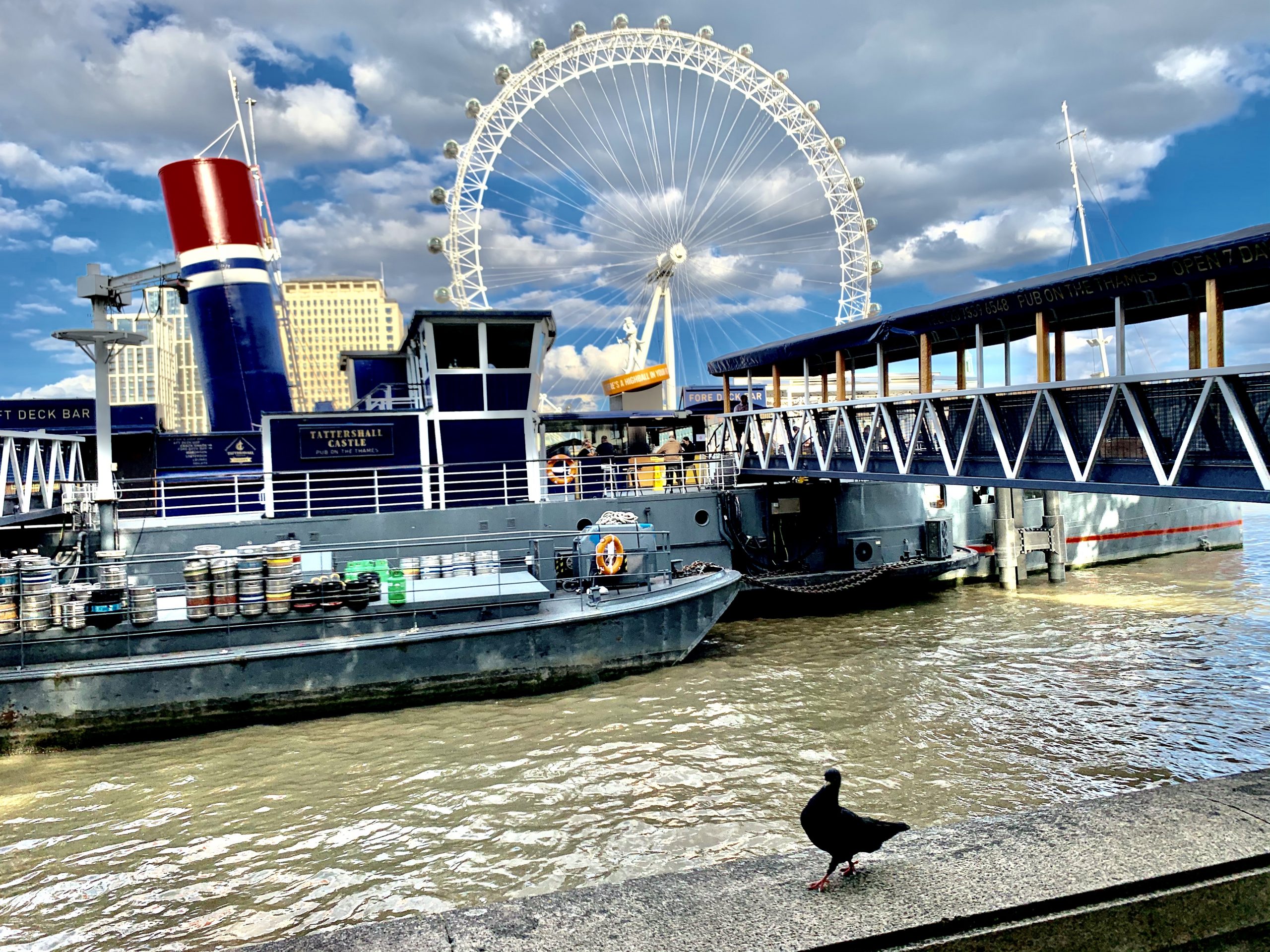 The London Eye on the site of the 1951 Festival of Britain. Image by @Meetmrlondon.

The Festival spotlighted some of the UK’s rising stars. They included its designer, Abram Games, the graphic artist who’d been responsible for many of the nation’s wartime propaganda posters. His Jewish faith and socialist values inspired him to create some of the 20th century’s most memorable graphic design. The Festival’s architect, Hampstead-born Sir Hugh Casson, became the future President of the Royal Academy. Aged just 36 at the time, Casson hired the best young talents of the day.

Some of the Festival’s distinct designs, seen on textiles and furniture, were inspired by science. The work of Nobel Prize-winning scientist Dorothy Hodgkin featured prominently. She was the pioneer of X-Ray crystallography. This revealed the molecular structure of compounds and chemicals … and also made for brilliant textile designs. 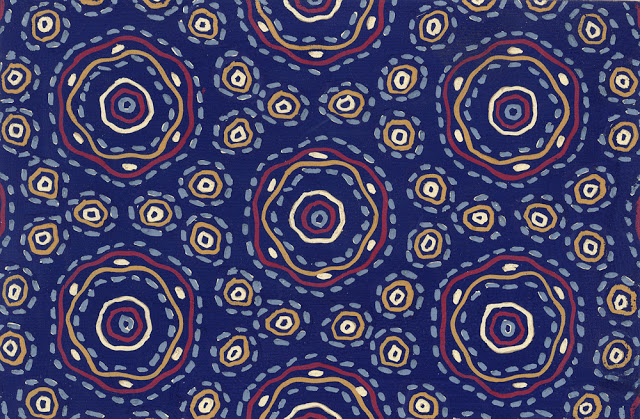 James Templeton & Co were part of a select group who came together to form the Festival Pattern Group.

If the Festival were held today, it would be supported by an array of sponsors. In 1951 however, apart from Guinness, which funded the Battersea pleasure gardens, private money was largely absent. Motor industry giants like Morris and Rover, for example, contributed nothing to the Festival’s £12,000 budget. Also absent was any celebrity endorsement. Hit films in 1951 included Pool of London, staring Earl Cameron, one of Britain’s first black celebrities. His endorsement and that of other leading lights of the day, like Alec Guinness, Joan Greenwood and Noel Coward, wasn’t sought to add stardust to the proceedings.

People loved the Festival. This ‘tonic to the nation’ gave them a taste of contemporary living. The South Bank boasted an astonishing six restaurants at a time when you’d struggle to get a cup of coffee in most museums and galleries. It also had outdoor terraces where one could watch the world go by – an early British experience of café society.

Not everyone embraced it however. Churchill returned to government in 1951. Tired and out of ideas, Winston was particularly keen to see the back of the Festival, which he saw as a celebration of socialism. For most visitors, however, this was something fresh and modern. It lifted the nation out of the greyness of post-war Britain. 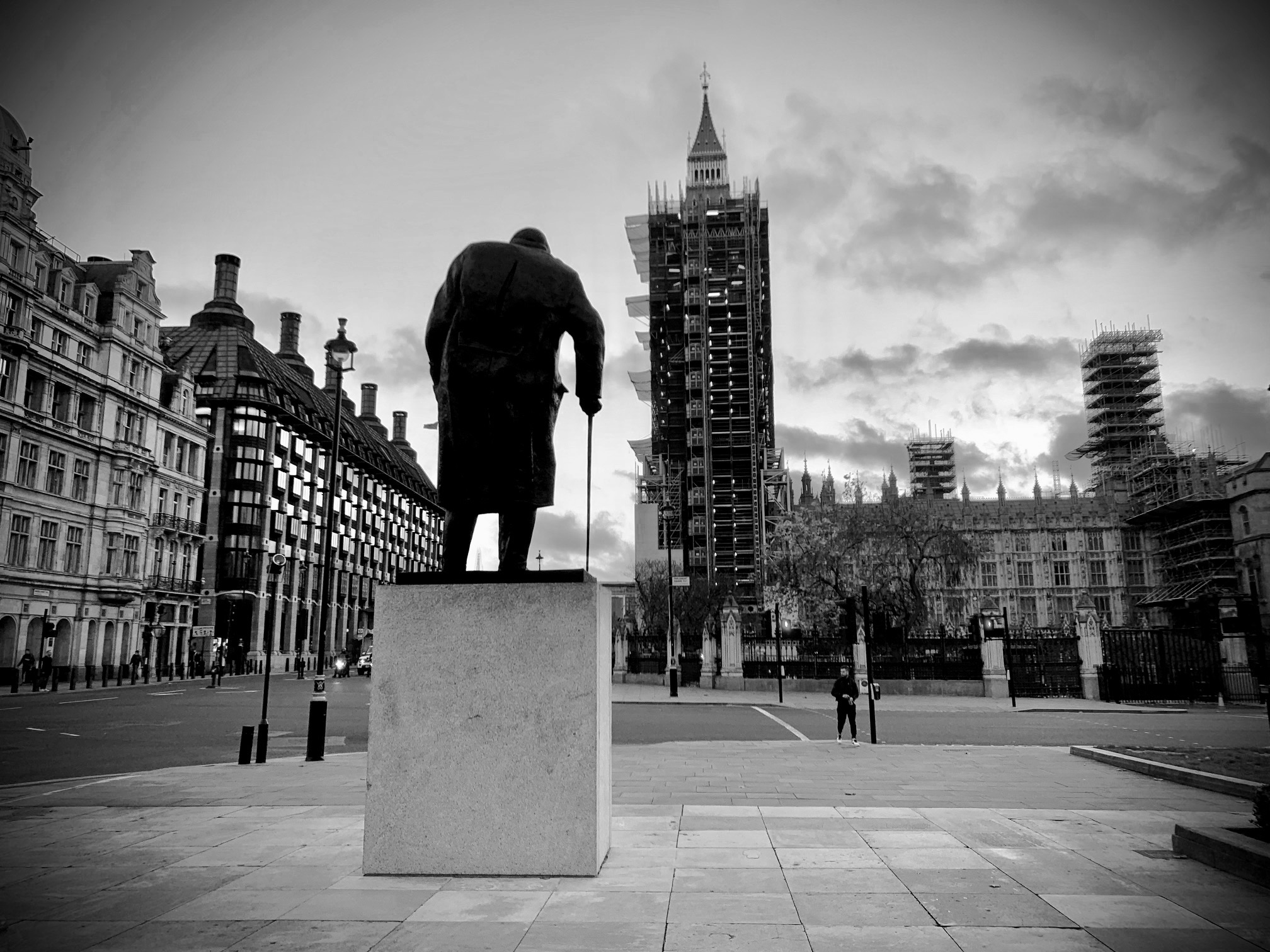 Winston Churchill ensured almost every trace of the Festival was removed when he became PM in 1951. Image by @Meetmrlondoner.

World War Two was itself a catalyst for innovation. It marked the dawn of a new era. From trauma and destruction emerged technological know-how and innovation. This included advances in design in everyday living, which the nation was excited to embrace – and which the Festival was equally keen to spotlight. There are some powerful parallels here with our own lives post-lockdown. Let’s hope – that by the Festival’s May anniversary  – that the Covid vaccination roll-out will enable us all to look to a more optimistic future, just as we did back in 1951.

Featured image: 1951 Postcard from the Festival of Britain’.