Love has been a theme for artists down the centuries. For Valentine’s Day, London Blue Badge guide, Tina Gwynne-Evans highlights five paintings for lovers in London collections. As these paintings show, ‘the course of love never did run smooth’. (William Shakespeare, A Midsummer Night’s Dream).

Venus & Mars
(1485, Sandro Botticelli, National Gallery)
Created as a wedding gift for a young Florentine couple, Sandro Botticelli’s sensuous portrait shows Venus and Mars idling away the afternoon in a shady glade. The message? Perhaps that Venus, goddess of love, has disarmed Mars, the god of war. Yet all may be not as idyllic as it seems. Venus throws her lover a frosty stare as he snores away, oblivious to the satyrs playing raucously with his armour. And perhaps the wasps buzzing about above Mars’ head offer a warning of the sting love can bring? After all, Venus was married to another. 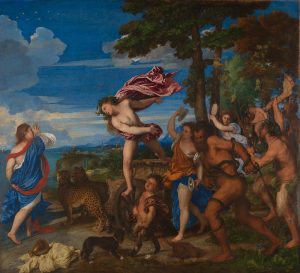 Bacchus & Ariadne
(1520, Titan, National Gallery)
Titan captures an electric moment of love at first sight. Seeing her lover sail off into the far horizon, Ariadne suddenly realises she has been abandoned on the island of Naxos. Happily, her tears are short-lived. Bacchus arrives to save the day, leaping love-struck from his chariot to reach her. Ariadne is smitten, but theirs is an impossible love. How can a god marry a mortal? 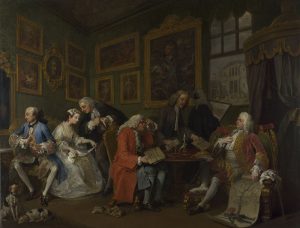 Marriage a la Mode
(1743, William Hogarth, National Gallery)
In a series of six paintings, William Hogarth tells a cautionary tale of why you should never marry for status or for money. Hogarth’s satirical take on the aristocracy and the aspirational merchant class in 17th century London begins with the Earl of Squander and a rich City Alderman discussing the marriage of their daughter and son. The series goes on to chart the chaotic path of the young couple towards ruin and tragedy, including the pox, a murder and a suicide.

The Awakening Conscience
(1853, William Holman Hunt, Tate Britain)
At first glance, this painting shows an intimate, light-hearted moment between a couple. A closer look reveals the psychological torment of a kept woman wanting to leap out of her gilded cage before she is discarded, like the glove lying on the floor. William Holman Hunt, one of a revolutionary band of young artists challenging the art establishment in the 1850s, met the model for his painting in a pub. He set Annie Miller up in an apartment and planned to marry her… some day. In the end, the real revolutionary turned out to be Annie. After a career as a model, she became independent, escaped the fate of many poor women in Victorian society and married on her own terms.

Mr. and Mrs. Clark and Percy
(1971, David Hockney, Tate Britain)
In this quiet painting, David Hockney captures Mr. and Mrs. Clark in their apartment as if they have been interrupted on a summer afternoon. The Clarks are in fact textile designer Celia Birtwell and fashion designer Ossie Clark, with their pure white cat called Blanche. Hockney’s painting of his friends, together, but separate, suggests companionship, but also the tensions relationships can bring.

These paintings are held in collections at the National Gallery and Tate Britain. What paintings would you add to a list of art for lovers?

Tina Gwynne-Evans, London Blue Badge guide and Director of City Treasures Tours, offers themed tours of London’s museums and galleries, including The Art of Love at the National Gallery.