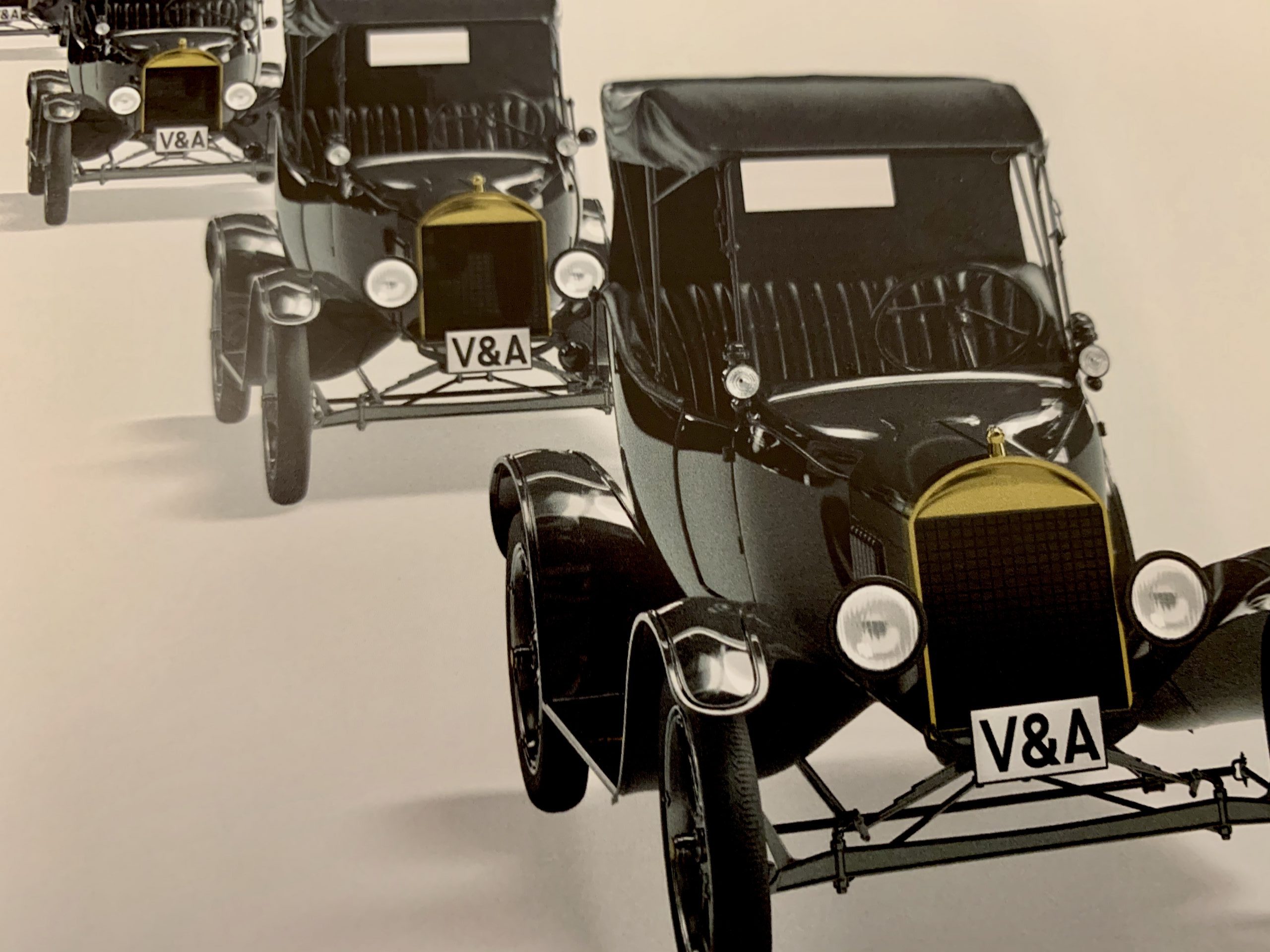 Cars: Accelerating the Modern World
An exhibition at the Victoria and Albert Museum

When the Duke and Duchess of Sussex left their wedding celebrations at Windsor Castle in May 2018, they departed in style. They drove away in a 1960s E-Type Jaguar. The car with its long sweeping curves, so emblematic of the swinging sixties, was described by Enzo Ferrari no less as ‘the most beautiful car ever made’.

Yeah Baby!
The E-Type famously appeared – alongside three scene-stealing Mini Coopers – in the 1967 crime caper The Italian Job, starring Michael Caine. That international man of mystery Austin Powers also had an E-Type. His was wittily rebranded as the Shaguar. 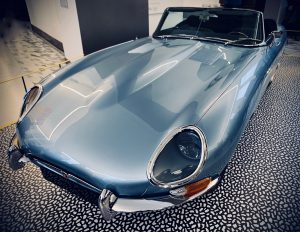 The Sussex’s car was, however, the Concept Zero version, modified to run on electric power. It features in Cars: Accelerating the Modern World at the Victoria and Albert Museum, the world’s largest museum of design. This exciting show looks at the history of the car over the past 130 years and explores how the automobile has shaped our world.

Back-to-the-future
The exhibition begins with a 1950s look at how we imagined cars might be by the 1970s. We see the incredible General Motors Firebird 1 Concept Car. This most experimental of models was inspired by jet fighters. It featured swept-back looks, cockpit seats and 200MPH gas turbine engines. 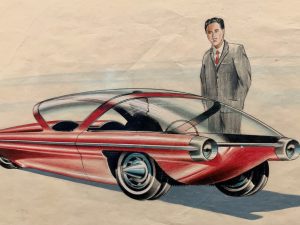 Cars might fly
Back then we thought we might be flying about the place by 1976. The concept of an automobile jetting through the skies is re-emerging as we re-consider the concept of the car. Alongside that idea (and way ahead of it) is the development of both electric vehicles and driverless transport. Patterns of car ownership are themselves changing. There’s a move towards public on-demand services, like the street cars which (like hire bikes) now proliferate across central London.

In Cars: Accelerating the Modern World – the automobile is explored in all of its guises. We see it as a social liberator, a glamorous status symbol and an affordable people’s runabout. It’s viewed in another light too – that of a child killer, environmental polluter and climate changer. 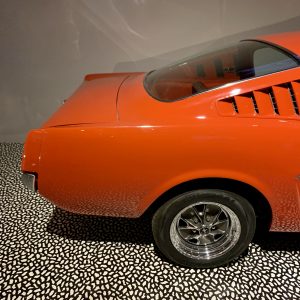 Mixed messages
In the words of Observer journalist Rowan Moore, the exhibition: ‘Treads a path between Jeremy Clarkson and Greta Thunberg, a broad-enough terrain but a fraught one’. Despite the fundamental questions the exhibition poses, there’s no doubt about the guilty pleasure of witnessing the beauty of the machines on display. The Ford Mustang Fastback is shown alongside clips from the 1968 film Bullitt. It’s thrilling watching Steve McQueen speeding through the streets of San Francisco in this most American of muscle cars.

Unsafe at any speed
The relative affordability of these V8-engined high-performance gas-guzzlers were seen to encourage reckless driving and a rise in road deaths. A digital counter in the exhibition displays the global toll – of 1.3 million road fatalities – every year. 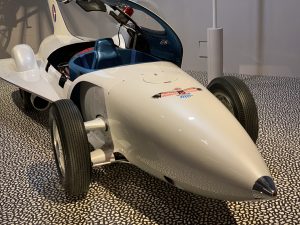 Firebrand 1 Concept car from the 1950s

Any colour as long as it’s black
The car that transformed Ford’s fortunes (and those of the entire motor industry) was the Model T. Henry Ford promised that drivers ‘could have any colour they wanted, as long as it was black’. The exhibition both celebrates the success of modern automation and Ford’s pioneering of mass production methods – now common in the 21st century.

Technology and know-how
The flip-side to Ford’s vision is also explored. These darker aspects of technological progress included poor labour relations and stringent (almost para-military) new internal security arrangements. One unseen consequence was the de-skilling of the workforce.
Automation changed the way people learned. In a short space of time, workers who’d previously been able to make things from scratch were losing their know-how.

Bug in the system
We also see the most right-on of cars, the VW Beetle. Often forgotten is that this people’s runabout was the pre-war inspiration of the Nazi regime. The little car with its fascist origins was re-born and re-branded as a quirky and classless icon of the counter-culture. It
went back into production in 1945 under the auspices of the occupying British Army in Germany, seeking to address its own transport needs. 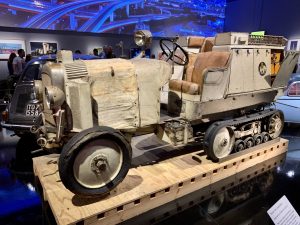 Marketing-driven
Company owner André Citroën absolutely understood the marketing potential of his vehicles taming the world’s toughest terrain. This incredible example in its desert colours wouldn’t look out of place in an Indiana Jones movie. 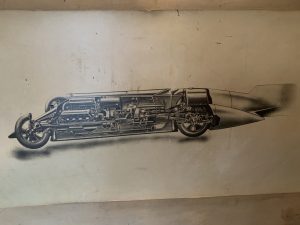 Sketch of The Golden Arrow

You are my Sunbeam
The exhibition display includes a beautiful scale model of the futuristic-looking and very bespoke Sunbeam supercar, known as the Golden Arrow. It’s my favourite car of all time. Sunbeam was a huge British success story from the 30s to the 60s. It’s most usually
associated with sober family saloons: it’s now all but forgotten.

A London record-breaker
The Golden Arrow was a complete one-off. It broke the land-speed record in 1926, on Florida’s Daytona Beach. At the wheel was Irish-American racer Sir Henry Segrave. This amazing vehicle was built in the London suburbs – in the now-demolished KLG works in
Kingston-Upon-Thames. Join me if you want to learn more about Segrave. Before building a home in Kingston, he lived in Marylebone. He’s remembered by a prestigious English Heritage blue plaque at his former home, near fashionable Chiltern Street. 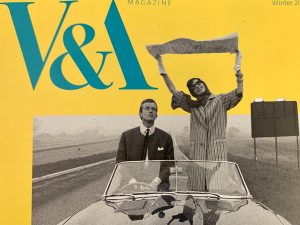 Poster for the V&A Car exhibition

Fashion-forward
It’s not all cars and climate change however. Fashion gets a look in too. We see motoring equipment for men and women, with examples of retro overalls, goggles and driving helmets. But the development of cars had a wider influence on fashion. Did you know that the ladies cloche hat, a mainstream of 1920s ‘Flapper Fashion’ was inspired by the streamlined design prevalent in the car design of the day? Life’s a journey.

Cars: Accelerating the Modern World is at the V&A, Cromwell Road, South Kensington until 19 April. Join me to see the exhibition and then discover more about London’s automotive history in a special new tour.