On the occasion of tomorrow’s Winter Solstice and the 25th Anniversary of the Rollright Trust in 2022, Blue Badge Heart of England Tourist Guide, Roberta Davis, shares some of her favourite folklore tales that haunt the stunningly beautiful region of The Cotswolds. 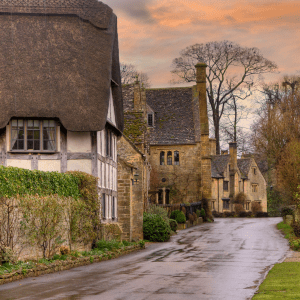 It was once said that there are enough witches in Long Compton, (on the A3400), a hot-bed of covens, to draw a load of hay up Long Compton Hill; one area close to the Red Lion pub was even known known as Witch End!

Long Compton is a small village in the Warwickshire Cotswolds. It’s nestled at the bottom of a valley, close to the border with Oxfordshire and about 5 miles to the north of the beautiful market town of Chipping Norton. What many visitors to this region don’t know is that Long Compton is host to the “Rollright Stones”, this region’s answer to Wiltshire’s Stonehenge. 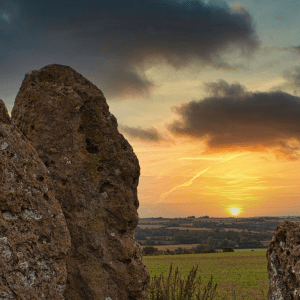 Folklore says that a group of men were turned to stone by a local witch here. The term “witch” was often attributed to elderly widowed women living alone; what we now know as independent women of some wisdom.

The Rollright Stones are made of natural boulders of Jurassic oolithic limestone which forms the bulk of the Cotswold Hills & has been used extensively in the region for building everything from churches & houses to stone walls. The Stones are Neolithic Bronze Age, privately owned monuments; each site dates from a different period & consist of three elements:

The oldest is the “The Whispering Knights”. Erected circa 3,800 BC & probably one of the earliest funerary monuments in Britain, are the remains of a portal dolmen – a type of Neolithic stone tomb. The ‘Knights’ are three tapering limestones that lean on each other. The capstone of the tomb has collapsed; just a fragment of a human’s left cheekbone was found inside. 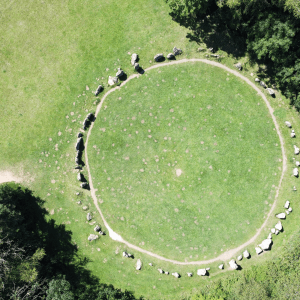 “The King’s Men” is an impressive ceremonial stone circle erected circa 2,500BC, consisting of approximately 70 heavily weathered stones, set in an irregular ring about 31 metres across. Originally, they may have numbered 101. It is here that annually Druids gather to celebrate the Winter Solstice

“The King Stone” was erected circa 1500BC as a permanent memorial to the burial ground. It may have been used to mark an important meeting place associated with an extensive Saxon cemetery nearby. It’s a strange shape – likened to a seal balancing a ball on it’s nose!

The Rollright Stones are evocative in themselves and are associated with a variety of folklore traditions. The Stones take their names from a legend about a King & his army who were marching over The Cotswolds when they met a witch who challenged the King saying:

and if long Compton thou canst see,

King of England thou shalt be”.

On his seventh stride, a mound rose up obscuring the view, & the witch turned them all to stone. The King’s army became “The King’s Men” (& his knights), “The Whispering Knights”, (plotting treachery). The King himself became “The King Stone”. The petrifying witch became an elder tree. Legend has it that if the tree is cut, the spell will be broken and the Stones will come back to life!

Legend also has it that it is impossible to count “The King’s Men”. The witches saw to that too! It is said that the man (or presumably woman!), will never live who shall count the Stones three times & find the number the same each time. It’s also said that anyone who counted  the same number each time,  will have their hearts’ desire fulfilled. It’s harder than you might expect!

Other myths surrounding the Stones relate to their visitations to the local villages and, in particular, towards bodies of water. “The Whispering Knights” go down to drink from the stream at Long Compton on New Year’s Day. “The King’s Men” are said to visit the well at a little hamlet known as Little Rollright. The “The King’s Men” link hands & dance at midnight.

If you’re ever in the Cotswolds ask for a private guided of the Rollright Stones. They are located on an unclassified road along the Oxfordshire/Warwickshire boundary, on the edge of the Cotswold Hills, north of Chipping Norton & South of Long Compton. It’s worth musing that this was probably the route William Shakespeare might have taken on his first journey to London in the late 1580s. You can just imagine, a trio of witches hubbling & bubbling here – did Shakespeare himself encounter such tales and apparitions before penning Macbeth’s crones?!

Dancing up the sun is tomorrow – Wednesday 21 December 2022 – with a sunrise at 07.44am at the  magical and mystical “Rollright Stones”,  in the equally magical region known as the Cotswolds. 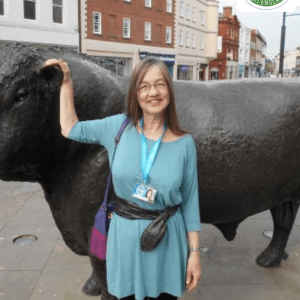 Roberta Davis is a qualified Heart of England Blue Badge Tourist Guide and Manager of Beorma Tours. She provides professional and peerless Panoramic & Walking Tours of the varied and cultural-rich Heart of England from the canals, and industrial & the arts heritage of Birmingham, to the ‘black & white’ villages of Herefordshire. She also offers tours of the medieval Colleges of Oxford, across Worcestershire, Regency tours in Cheltenham, tours of the delightful villages of The Cotswolds and stunning Medieval Tewkesbury. Specialist & themed tours are also available such as Literature & Arts, Music, Industry, Museums and Galleries. You can book a tour with Roberta here