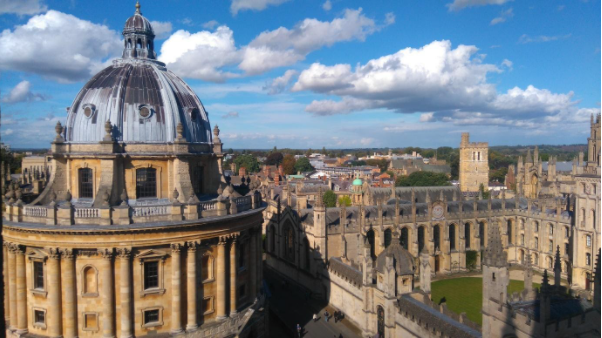 Blue Badge Guide, Tabby Lucas, shares stories behind some of Oxford’s fascinating characters involved in the city’s long and illustrious history of medicine from educating a rude Royal doctor to the development of the Covid-19 vaccine.

Oxford is littered with buildings named after John Radcliffe, but who was he? Radcliffe started life at Oxford as a student at University College, later becoming a fellow at Lincoln College.  Moving to London, he set up a lucrative medical practice attracting the rich and famous of the day including King William III, his wife Queen Mary II and her sister Queen Anne. 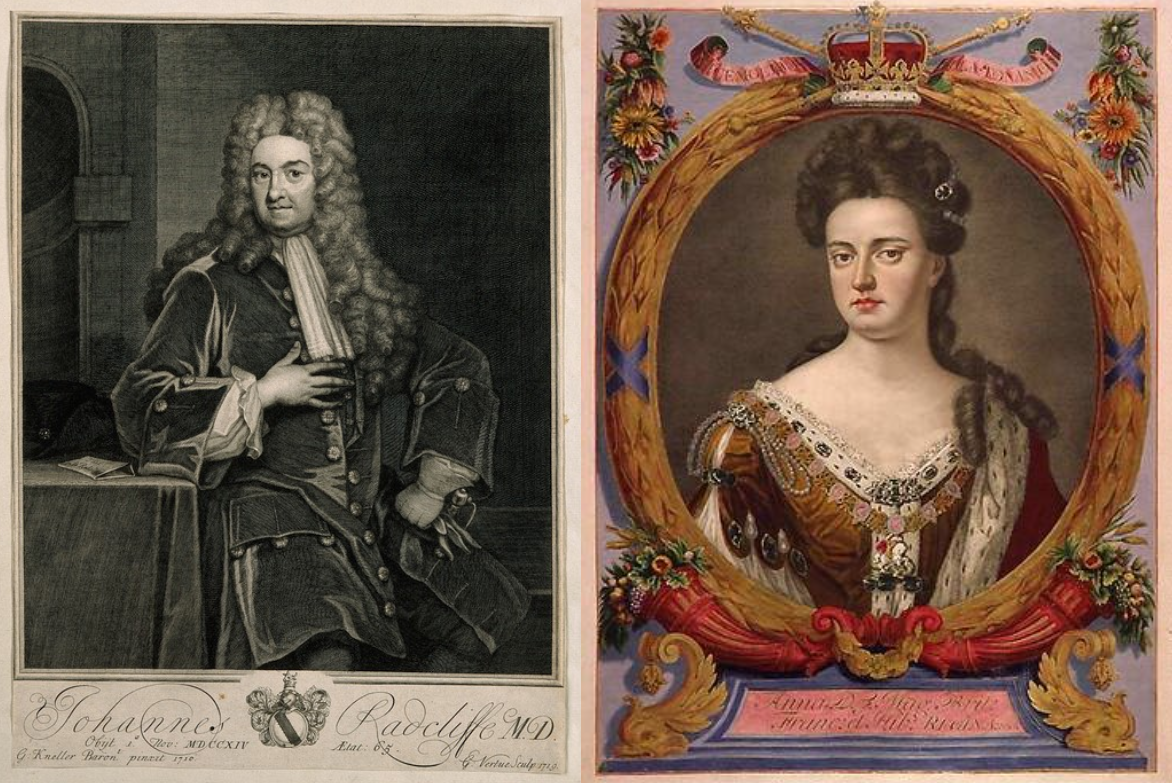 On the left: John Radcliffe, Line engraving by G. Vertue, 1719, after Sir G. Kneller, 1710. On the right: Queen Anne. Both images are in public domain.

John Radcliffe was notorious for being rude to his patients. One time he refused to leave the tavern where he was drinking to attend Queen Anne, saying she had  ‘nothing but the vapours, and that she was in as good a state of health as any woman breathing, could she but give into the belief of it’.

Radcliffe amassed a huge fortune by the time he died in 1714, leaving £40,000 to his old university to establish a library. The result is the Radcliffe Camera, one of Oxford’s most famous landmarks.

A physician with a very different attitude to his patients was the Canadian born William Osler, Regius Professor of Medicine at Oxford from 1904 to1919.  He came up with the radical idea of bringing medical students out of lecture theatres and onto the wards saying, “Just listen to your patient, he is telling you the diagnosis.”

On the left: William Osler, photo by unknown photographer. On the right: The Open Arms, 13 Norham Gardens, Oxford. Image by Tabby Lucas.

Osler was such a hospitable man that his home at 13 Northam Gardens was nicknamed “The Open Arms.”

A later occupant of 13 Norham Gardens was Richard Doll, Regius Professor for Medicine from 1969 to 1979. When he retired, Richard Doll founded Green College (now Green Templeton) and became its first warden.

As a young man, Richard Doll wanted to read mathematics at Cambridge but he drank so much of Trinity College’s strong ale that he flunked his final scholarship exam. Luckily for us, Doll studied medicine, later combining his mathematical and medical knowledge as an epidemiologist. In 1950 he published a paper showing the link between smoking and lung cancer. Scientists had previously thought air pollution might be the cause of lung cancer and Doll himself wondered if tarring of the roads might be the culprit.

Today, we all take for granted that infections can be treated by antibiotics, but in the early part of the 20th century a minor injury could lead to death. In 1928, Alexander Fleming discovered the antibacterial properties of juice from a Penicillium fungi and then a team of Oxford scientists working during the Second World War turned this discovery into the medicine penicillin. This work was vital for the war effort as soldiers were dying of bacterial infections.

The penicillin team was led by the Australian pathologist, Howard Florey, and included the biochemists Ernst Chain and Norman Heatley. Ernst Chain was born into a Jewish family in Germany, moving to England when the Nazis came to power. Chain came across Fleming’s almost forgotten paper prompting the team to start further investigations. One of the problems they faced was what to grow the mould cultures in. Norman Heatley was a great innovator – true to the wartime make do and mend generation, sheep dip cans, biscuit tins, pie dishes and bed pans were used. 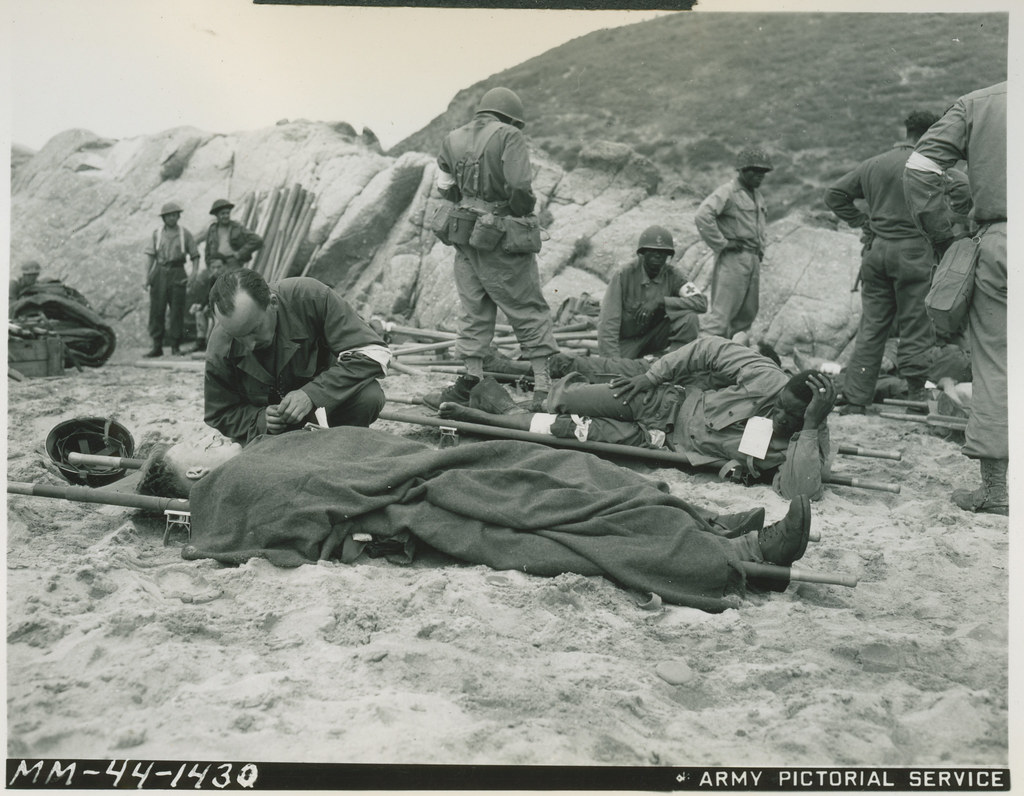 Millions of doses of penicillin were made in time for the 1944 D-Day Normandy landings. Image by Signal Corps Archive, marked with CC PDM 1.0

It was another Oxford scientist, Dorothy Crowfoot Hodgkin, who discovered the three-dimensional structure of penicillin using X-ray crystallography, publishing her findings in 1945.  You can see one of her models made of Perspex, and exhibits about the penicillin team, inside the Museum of the History of Science. 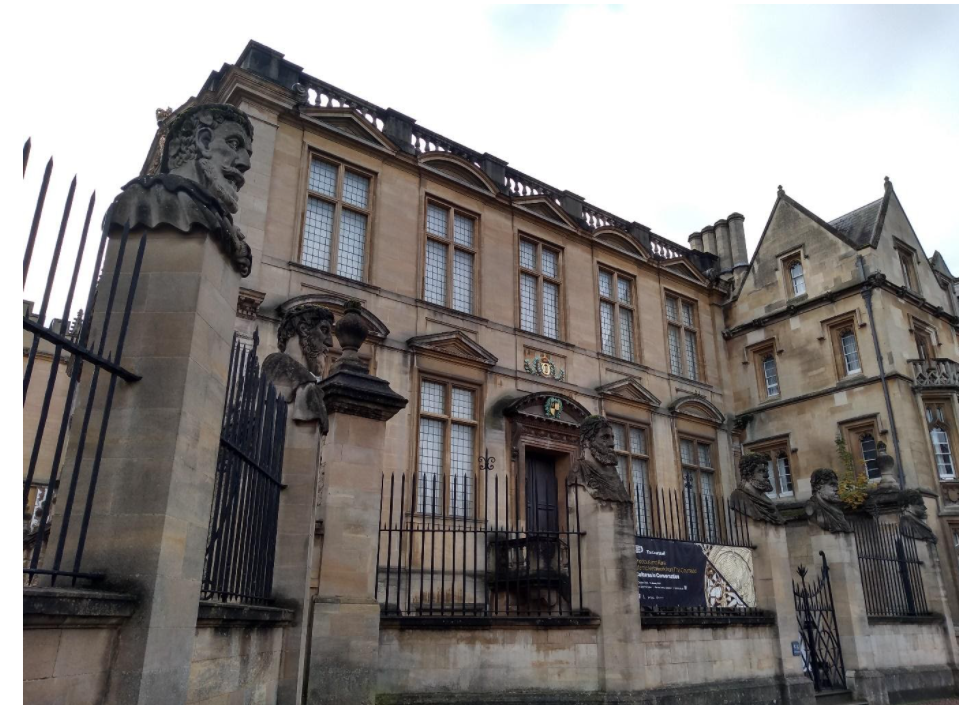 Museum of the History of Science in Oxford. Image by Tabby Lucas

In 1964, Hodgkin became the first and only British woman, so far, to win a Nobel Prize for Science. A newspaper headline at the time read “Nobel Prize for British Wife.”

In the late 1940s, a young Margaret Thatcher was one of Dorothy Hodgkin’s students at Somerville College. Despite having very different political views Margaret Thatcher admired (and was somewhat in awe of) Hodgkin, and hung a portrait of her old tutor in 10 Downing Street. Hodgkin’s comment on Thatcher was ‘One could always rely on her producing a sensible, well-read essay.’ 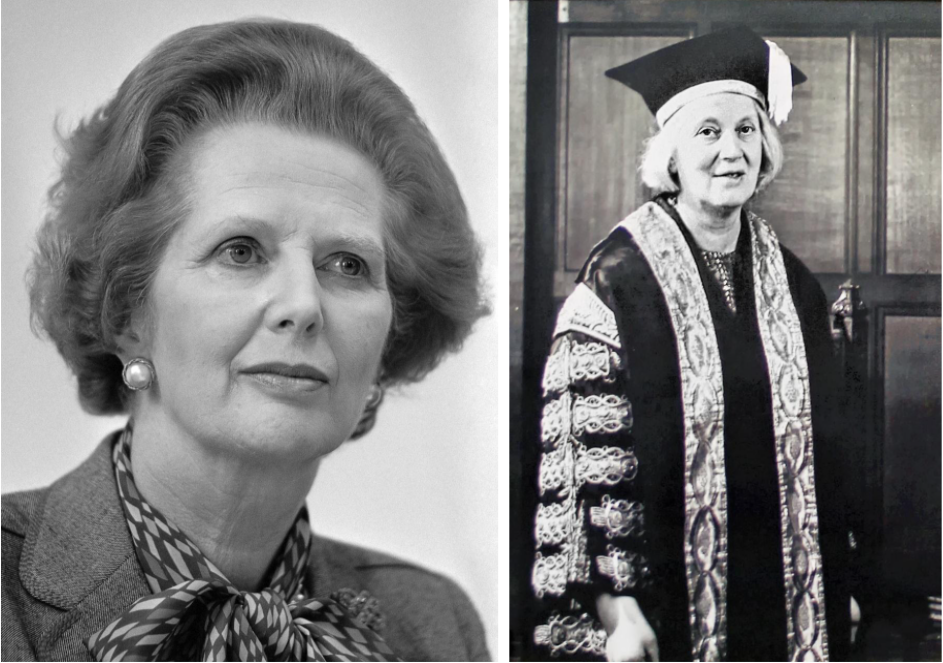 Oxford injects hope for the future

In 2020, a team of research scientists from the University’s Jenner Institute developed the Oxford Covid-19 vaccine.  Professor Sarah Gilbert, who led the team, felt she’d been prepared for the non-stop work involved in bringing out this vaccine in record time due to the sleepless nights she experienced as the mother of (now grown-up) triplets. She said, “It has been a privilege to be part of this multi-national effort which will reap benefits for the whole world.”

Yet again Oxford scientists are at the forefront of life-saving medical research. 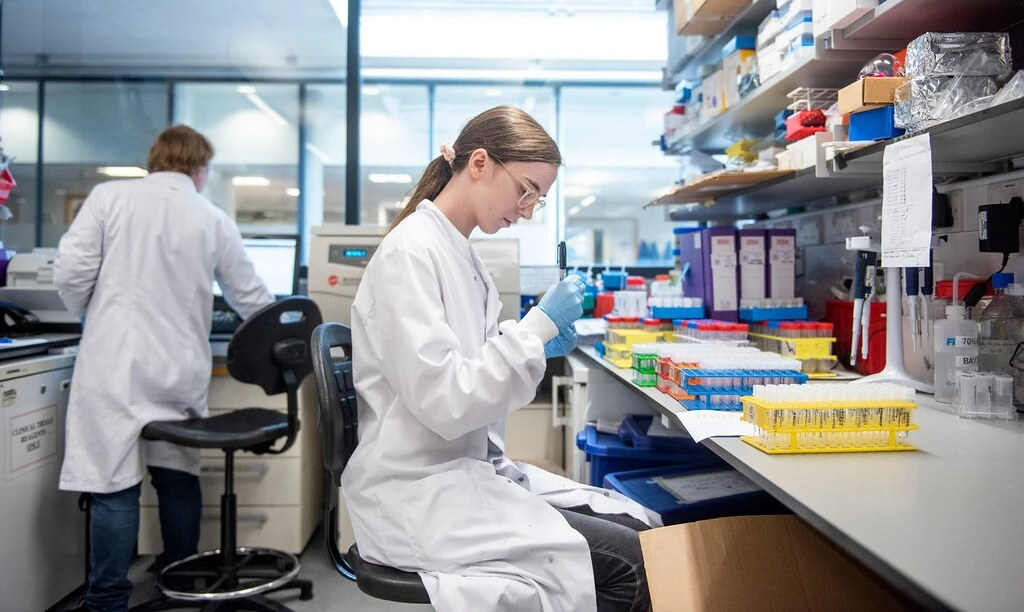 Tabby Lucas is a specialist Oxford Green Badge Guide and a Blue Badge Guide for the Heart of England. She was born and grew up in Oxford. She loves to help visitors discover her home city and also to explore the nearby Cotswold Hills where she now lives. If you would like to find out more please see Tabby’s Guild profile, visit her website Cotswold and Oxford Tours, or look on Instagram.