The year 2021 marks 200 years since the independence of Peru from Spanish rule. To mark the occasion the British Museum is hosting an exhibition on Peru called ‘A Journey in Time’ and this is exactly what it is. We span the years 1800 BC to the Spanish conquest and the effect the conquest had on Peru. 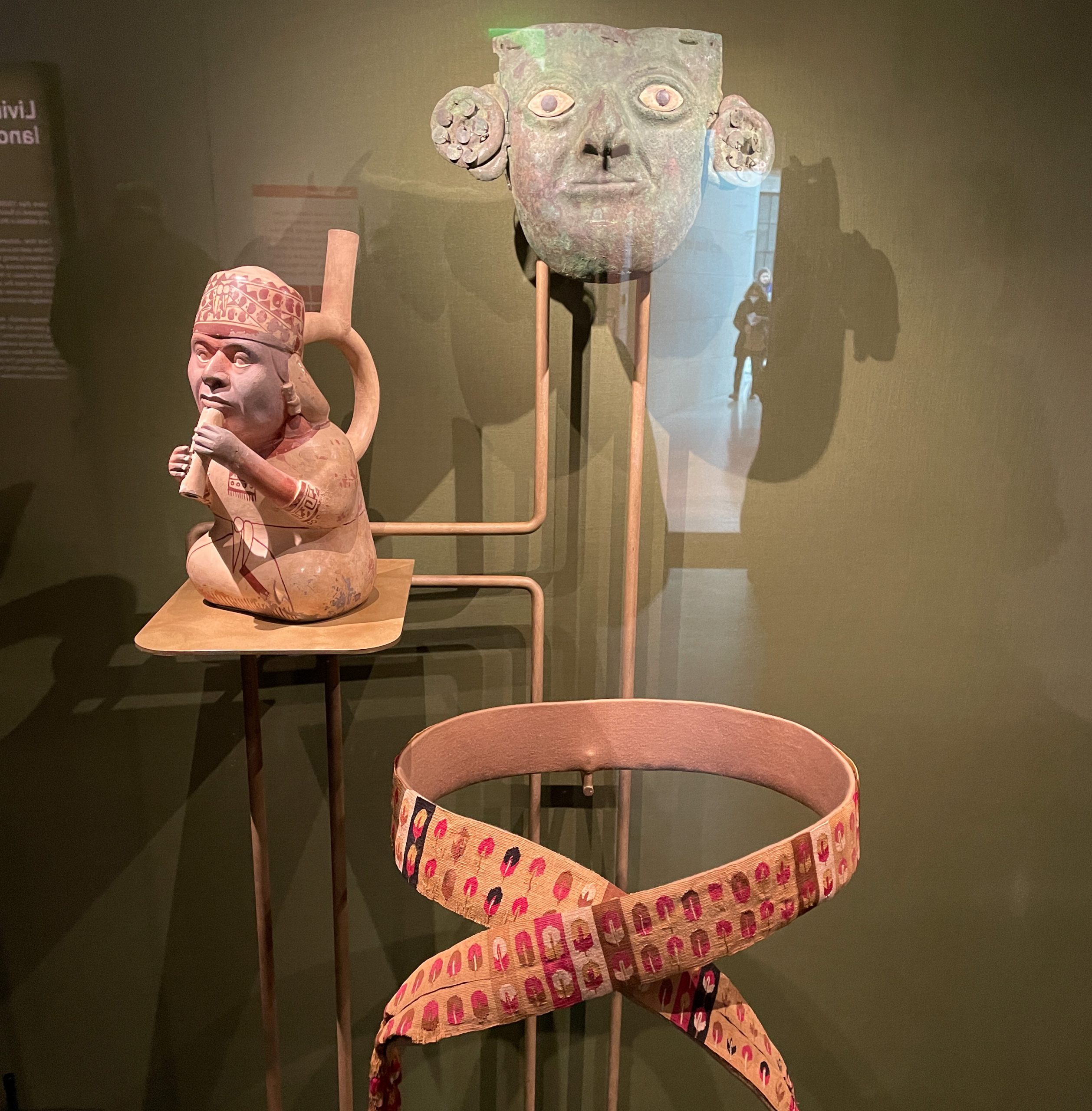 Here we have a Musician playing a flute from the Moche era AD 100-800. Notice the funerary mask from the Moche era too for the after life and this wonderfully coloured tasselled band from the Chimu era 900 – 1470 AD. Photo by Deirdre Donegan

When we think of Peru we tend to think of the Inca culture.  Many people are not familiar with cultures before Inca including Chavin dating back as far as 1200 BC. Paracas (900-200BC)  Nazca (200BC to 650 AD) , Moche, Wari, Chimu and Inca. All of these people used the landscape be it desert or mountains and the natural world as their guide. They were acutely aware of their environment because they had to embrace the dry desert, the steep mountains and work with them and respect the sun and the moon.  They were wonderful craftsmen and turned their hands to ceramics, weaving, metalwork and wood carving. They established a wonderful network of routes across the rugged terrain and used road runners ‘chasquis’  as a means of communication and transport using storage facilities for food on the routes and of course large herds of llamas and alpacas.  The cultures of Paracas and Nazca are based on the South coast in the arid desert. For me, some of these textiles and ceramics are the most beautiful. These people were surrounded by marine life so what best to paint on to ceramics and weave into textiles but killer whales, anchovies, creatures of the sea. 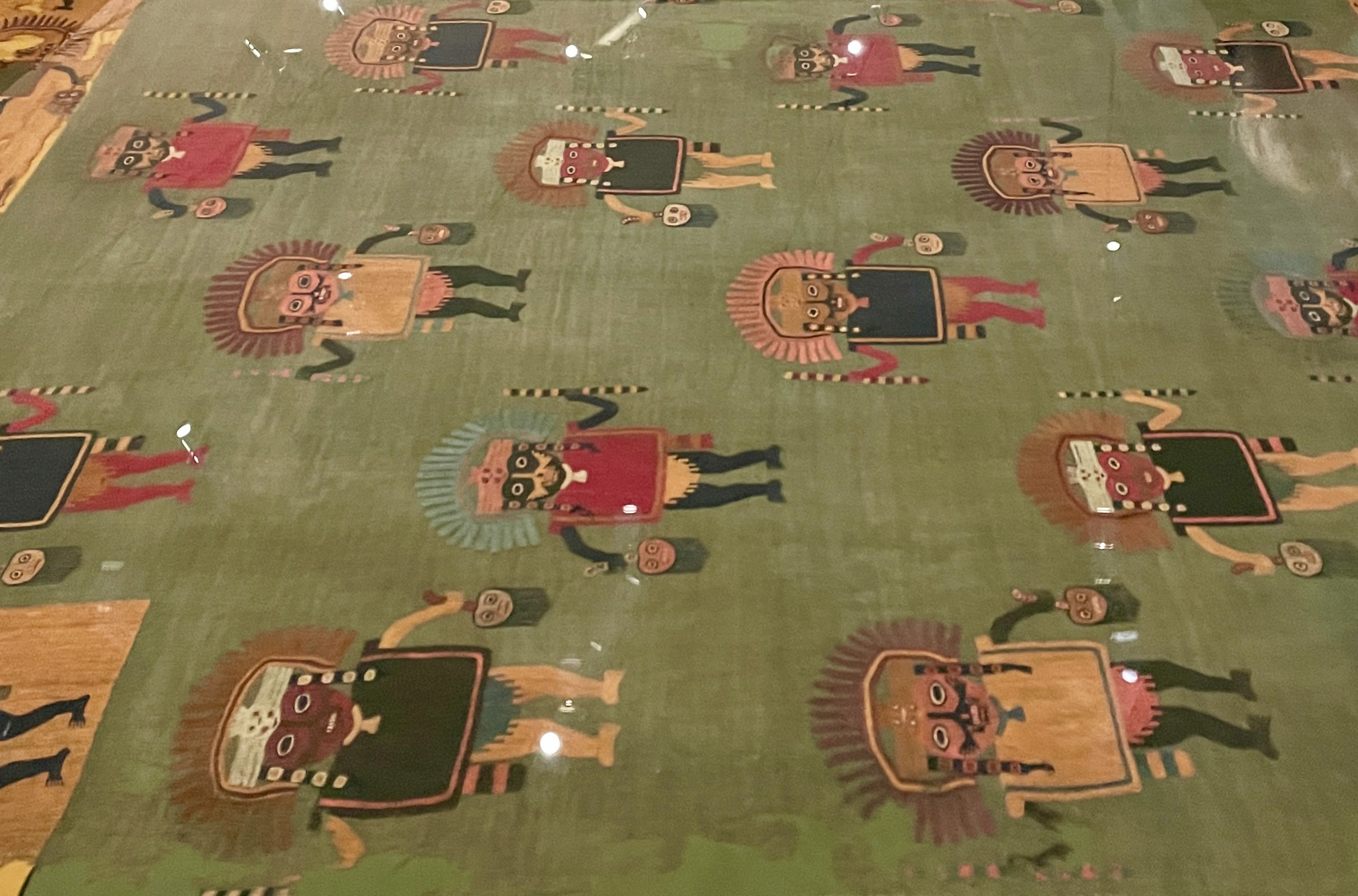 A mantle from the Nazca era 100 BC – AD 100. These are human figures holding severed heads. Pieces like this may have been used to wrap mummies for the after life. Notice the exquisite colours. Image by Deirdre Donegan

Whilst you are in the British Museum don’t miss: 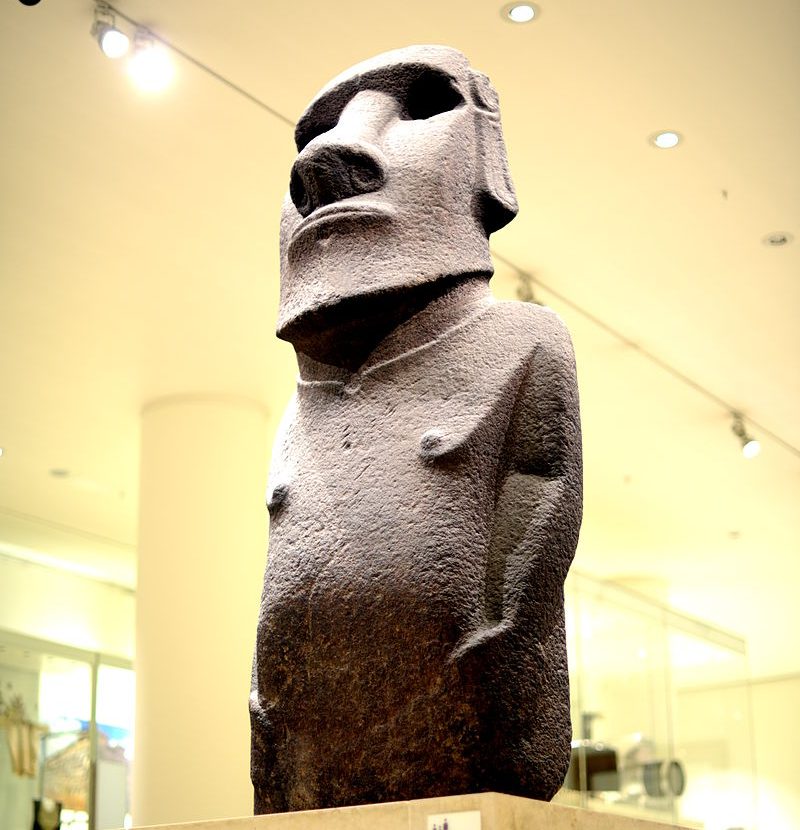 In Room 24 see Hoa Hakanai from Easter Island. You can’t miss it, made of basalt and in around 1200 AD. These fabulous statues would have stood with their backs to the sea as protectors of the island. They would have housed an ancestor figure. There was a crisis on the island in about 1600 and the statue making stopped. Do go and find out why this happened and what the islanders did to find favour with the Gods again. 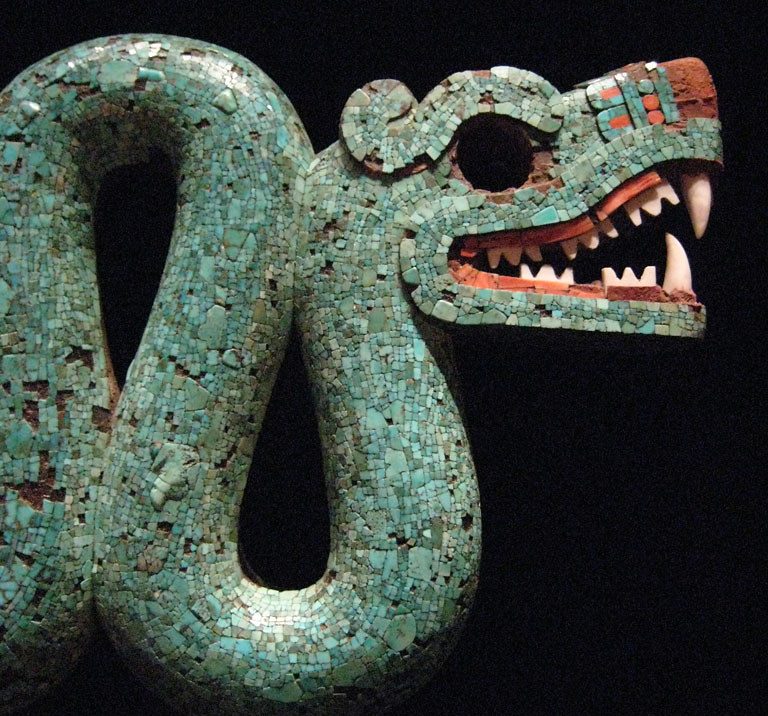 In the Mexican galleries look out for the Double-Headed Serpent from Mexico.  Probably made between 1400 and 1700 and made of turquoise.  It is a symbol of fertility and regeneration. Again the Aztecs were keen observers of nature and the natural world. One of their Gods was ‘Quetzalcoatl’ the ‘feathered serpent’. As you look at this piece and the light playing on the turquoise it does look a little like feathers reminding us of the God, the feathered serpent.

And other places in London to visit are:

This is the largest of London’s squares and in 1826 Earl Grosvenor obtained an act of Parliament enabling him to build on it.  Thomas Cubitt was the architect. By 1840 most of the houses were occupied and today it is the home of many embassies and it used to be home to Canning House which was a forum to build relationships between the UK, Latin America and Spain.

In Belgrave Square, we have statues of the Liberators and of Christopher Columbus (1446-1506) by Tomas Banuelos and given to London by Spain. The statue was put in place in 1992. 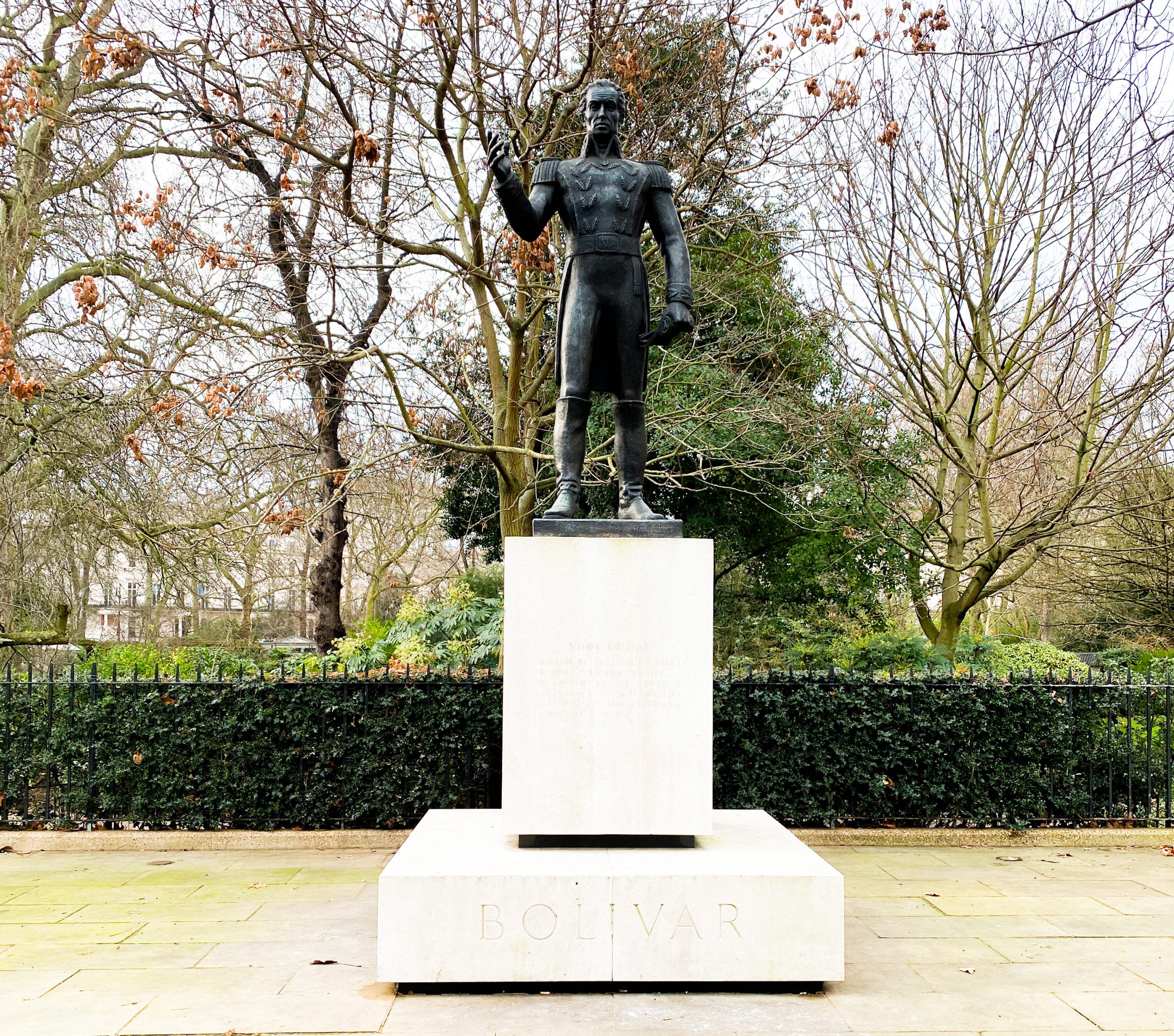 On Simon Bolivar’s statue are the words: ‘I am convinced that England alone is capable of protecting the world’s precious rights as she is great, glorious and wise’. Photo by Deirdre Donegan

The statue of Simon Bolivar can be found in the southeast corner of the square.  Simon Bolivar was born in 1783 into a wealthy Venezuelan family. He was handed over at the age of 3 by his mother into the hands of the family lawyer as his mother found him too difficult to handle. He did later return to his family.   He is the Liberator of Venezuela, Colombia, Ecuador, Peru and Panama. It is by Hugo Daini, an Italian sculptor who had lived in Venezuela. Simon Bolivar drove his men through flooded plains and the High Andes to liberate Colombia.  He then marched down the Andes to liberate Ecuador, Peru and Bolivia.  Bolivar also visited London and a blue plaque can be seen at the house he stayed at on Duke Street.

The statue of San Martin in the North-East corner of the square is by Carlos Ferrara.  San Martin was the founder of Argentine independence and gave freedom to Chile and Peru.  The statue is a gift from the British community in Argentina. San Martin marched an army almost without losing a man across the high Andes to liberate Chile. His army was accompanied up the Pacific coast of Latin America to capture Lima by the eccentric Scottish Admiral Lord Cochrane. He is buried in Westminster Abbey.  A Scottish earl and a colourful character who had been convicted of fraud and had to leave the navy.  However, a couple of years later he went on to command Chile’s navy in the rank of vice admiral.   The Chilean government were delighted to have him. Wreaths have been laid on his tomb by Chilean navy representatives every year.  Thomas Cochrane went on to play an important role in the independence of Peru and Chile.  Thomas Cochrane then went to Brazil where he was appointed ‘First Admiral of the National and Imperial Navy’.   Later he returned to England where his crime was forgiven.

In the City of London the Walkie Talkie Building by Rafael Vinoly, otherwise known as 20 Fenchurch Street. Rafael Vinoly is from Uruguay and the building was completed in 2014 and there is a wonderful Sky garden at the top which you might like to visit.  You never know you might find a Pisco Sour there to complete your tour of South America in London. 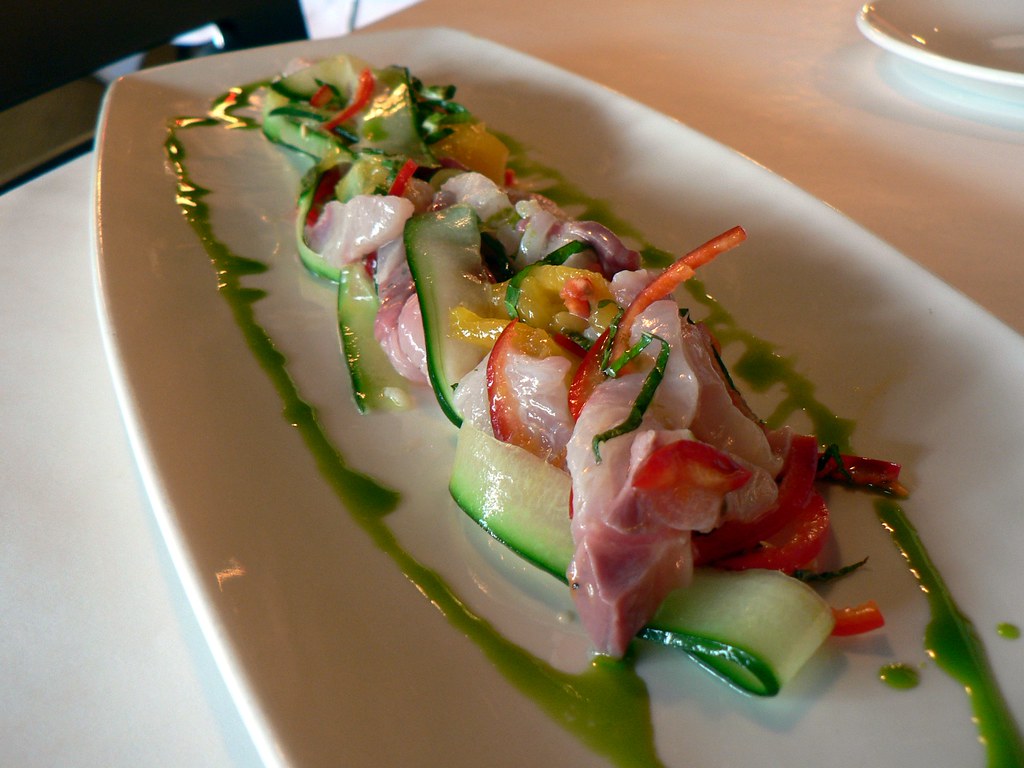 Try ‘ceviche’ or ‘tiradito’ in Peruvian Restaurants in London.  To finish off your day you could go to Coya in Mayfair or Chicama on the King’s Road.

Featured image: Moche AD 100 – 800 A deer with a mythical scene below. Image by Deirdre Donegan 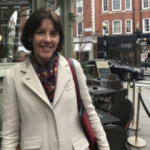 Deirdre Donegan is a London Blue Badge Tourist Guide and has lived in London for much of her life. She loves meeting people of different nationalities and cultures and enjoys introducing this fascinating city to visitors to London. Some of her special interests is visiting museums and learning about other people’s cultures. You can contact her here or through the email deirdreadonegan@gmail.com.