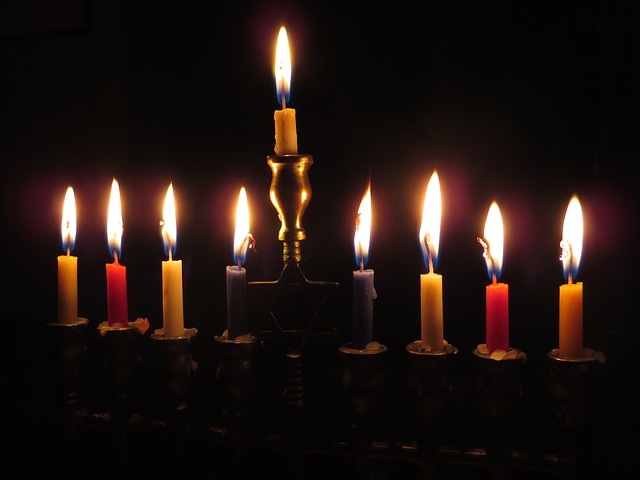 This week, Britain’s Jewish community will be celebrating Hanukkah/Chanukah (‘ch’ as in Scottish ‘loch’), the annual festival of lights that this year begins on the evening of Sunday 22 December and runs for 8 days up to Monday 30 December. In common with festivals celebrated by communities everywhere in the world, there are certain foods that are associated traditionally with such events.

Blue Badge guide, Mark King serves up this amuse-bouche to tempt you out on tour around different parts of the country where Jewish culture and heritage may be tasted today.

What is this festival’s origin?

This 8-day festival dates back to when the Jewish community in the Holy Land was under threat from Greek culture (1st-2nd century BCE).  Against overwhelming odds, the Maccabees successfully led the fightback to preserve Jewish identity and resist cultural oppression. Chanukah commemorates their rededication of the holy temple in Jerusalem that had been defiled, with a central part of the story relating how one night’s worth of oil for the menorah (candlestick) miraculously lasted for eight. Chanukah has wide resonance as a timeless story of survival of a people’s identity and the struggle for religious freedom.

Far from it! But from that key detail about miraculous oil developed a tradition of eating treats that involve frying or baking in oil. Particularly popular foods are doughnuts, latkes and pancakes. 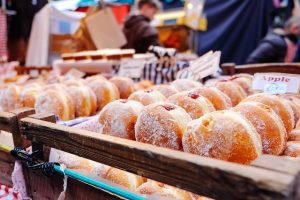 Hardly confined these days to the Jewish community, everyone will be familiar with doughnuts – fried dough balls covered with powdered sugar and with a jam, fruit, chocolate or sweet cream filling (sufganiyot in modern Hebrew). Less familiar to many, perhaps, is a doughnut variant called loukoumades – small, Greek-style honey puffs that are deliciously crispy on the outside, fluffy inside. Similar to a French crêpe, fried thin pancakes coated with jam, honey or sweet cheese are a link, some say, to meals eaten at speed by brave Maccabee warriors out on campaign. Latkes (in Yiddish, levivot in Hebrew) are shredded potato fried in oil and are consumed with sweet toppings, such as applesauce or sour cream. Other cheese or dairy-based foods are enjoyed at Chanukah too. 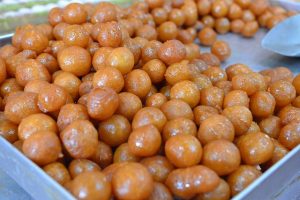 Loukoumades – small, Greek-style honey puffs that are deliciously crispy on the outside, fluffy inside.

In case you’re thinking that it’s all about food (nosh in Yiddish), Chanukah has become one of the year’s fun festivals – a much-anticipated opportunity to bring family and friends together to celebrate identity. A newly-lit candle is added each day to the chanukiyah (festival candlestick). Traditional tales are told and songs are sung. A gambling game is played with stakes wagered in chocolate coins (gelt) using dice called dreidels. And did I mention the exchange of small gifts? 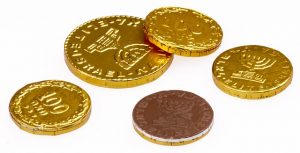 In societies where the pressure of Christmas sales begins ever earlier and ‘Black Friday’ is becoming an established thing even outside North America, some Jewish people see Chanukah as a timely opportunity to distract from the omnipresent lure of Santa, reindeer, elves, stockings, crackers, card-sending and outright commercialism. (However, I am personally of the opinion that one can never have too many roast turkey eating occasions throughout the year!)

Where to experience Chanukah

England’s Jewish community was brought over from continental Europe by the all-conquering Normans in 11th century – maybe even earlier during Roman times but there’s no solid evidence – and sojourned around the land until summarily expelled by King Edward I in 1290. Allowed formally to return in 1656 by Oliver Cromwell as Lord Protector of the Commonwealth of England, the Jewish community has grown into a vibrant presence in many cities and towns.

Shops and restaurants offering authentically ‘Jewish’ food such as latkes are easier to find in certain neighbourhoods in central and suburban London, Manchester or Glasgow. You should also be able to find in Oxford, Nottingham, Leeds, Brighton, Bournemouth, Ramsgate, Cardiff, Belfast, the Channel Islands or even Canvey Island in Essex. Of course, thanks to internet shopping such items may be sourced easily and in any case, these fried dishes are not hard to make in one’s own kitchen. As Chanukah is celebrated in public as well as in the home, you may see enormous 8-branched candlesticks with electric lights popping up temporarily in high-traffic areas of London and other cities. It’s about shining the light of goodness outwards to brighten our world, not just within oneself. 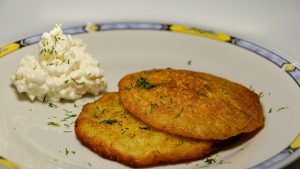 Many shops and restaurants offering authentically ‘Jewish’ food such as latkes

The Jewish community’s history and heritage may be found in Winchester, York, Norwich, Merthyr Tydfil, Canterbury, Bradford, Liverpool, Plymouth, Penzance, Sunderland and Dublin, as well as other places.

As a London-based guide, I often bring visitors to local markets and shops to enjoy an authentic taste of fine produce typical of our diverse communities. It’s one of the joys of guiding in such a cosmopolitan city, after all!

Across the country, Britain’s professionally-trained Blue and Green Badge guides will be delighted to help you to discover tastes traditionally associated with this brilliant festival while introducing you to the past, present and future of the local Jewish community.

Like the festival of Chanukah itself, great story-telling combines perfectly with a tasty snack when enjoying a memorable experience together! ‘Chag sameach!’ (‘Happy holiday!’)